The majority of scientists agree that living creatures evolved through natural selection. That is, we dump unfavorable body parts and develop favorable ones. While it is a slow process, it usually leads to the creation of entirely new—and often strange—animals over thousands or millions of years.

Many of these animals had strange features that would have scared the heck out of us and even other animals. Who wouldn’t be scared of a 9-meter-long (30 ft) crocodile? Or a four-legged snake? Thankfully, they have all gone extinct. 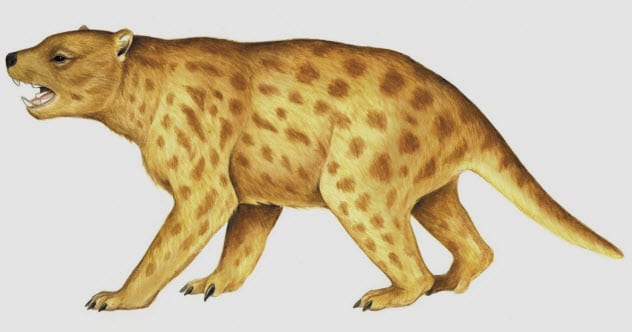 The marsupial lion (Thylacoleo carnifex) is an extinct carnivore that resembles the Tasmanian devil. It just happened to be bigger, more ferocious, and more intimidating with powerful jaws, strong bones, and supersharp jaws and teeth. Researchers have likened it to a “Tasmanian devil on steroids.”

Although the marsupial lion sounds terrifying, it had one major flaw: Its backbone was not flexible enough to allow it to chase prey. Its forelimbs and collarbone were also excessively strong. The marsupial lion worked around this by pouncing on its prey from trees and other heights.[1] 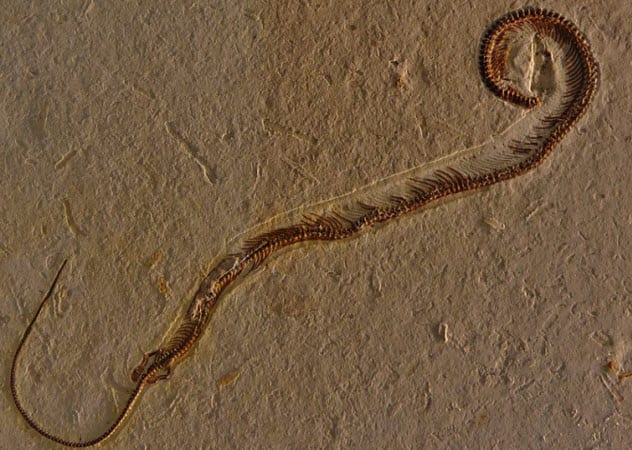 However, some experts don’t think that Tetrapodophis was even a snake. Michael Caldwell of the University of Alberta, Canada, says that Tetrapodophis’s spine and skull do not resemble those of a snake. It could have been a lizard or some other reptile that went extinct.

This could be true because not all legless reptiles that separated from lizards ended up becoming snakes. A good number of them became legless lizards. In fact, researchers believe that only one of the 26 legless reptiles that evolved from lizards became a snake. The rest are legless lizards or weird creatures like the Bipes lizard that has only two front legs and no hind legs.[2] 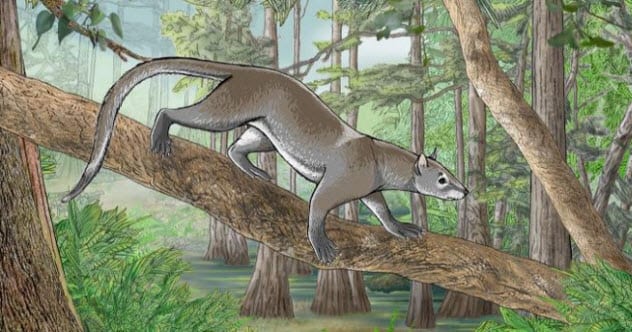 The small Dormaalocyon latouri was one of the most interesting animals that ever existed. It is the common ancestor of over 280 carnivores including tigers, lions, dogs, seals, bears, and even small cats. This is remarkable because the Dormaalocyon latouri lived in trees and weighed less than 1 kilogram (2 lb).[3]

Researchers were able to get a closer look at the animal when they unearthed a 55-million-year-old fossil in Dormaal, Belgium. They discovered that Dormaalocyon latouri resembled something that was born when a small cougar mated with a squirrel. It lived in trees from where it pounced on smaller animals and even insects.

7 20-Clawed Bat That Hunted During The Day 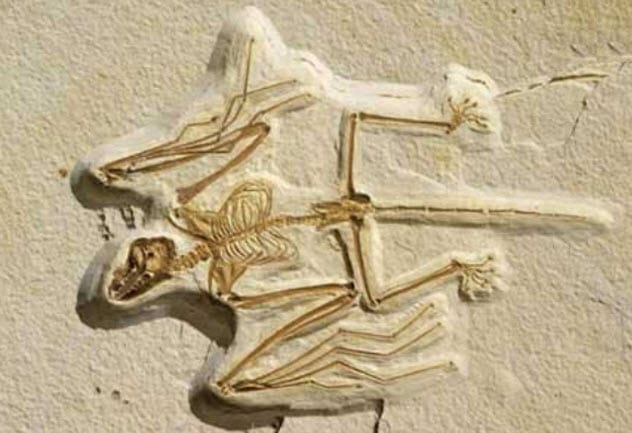 Most bats use echolocation to hunt at night. Interestingly, this is a modern development. The first bats depended on their eyes to hunt. And they did that during the day.

Researchers made this discovery when they uncovered the 52.5-million-year-old fossil of a bat that was unable to use echolocation. Instead, it hunted during the day and depended on its eyes and other senses to catch its prey. However, scientists could not confirm if the daytime bat had good eyesight to hunt at night because a part of the skull that housed the eye socket of the fossil had been destroyed.

Apart from the obvious lack of parts that would have aided echolocation, the bat was unusual because it had a claw on all five digits of each limb. This earned it the nickname “20-clawed bat.” Nevertheless, the bat was just 10 centimeters (4 in) long, making it the same size as many small bats that use echolocation today.

Researchers have always wondered why bats prefer to hunt at night. So far, the answers are inconclusive. They have suspected that bats became night hunters because birds competed with them for insects or even preyed on them for food. Alternatively, it could be an attempt to escape the heat from the sun because bats overheat when exposed to the sun.

Nevertheless, the discovery of the fossil of the daytime bat proves that bats used to be daytime hunters that depended on their eyesight for hunting. They later turned into night hunters and developed echolocation in place of stronger eyesight.[4] 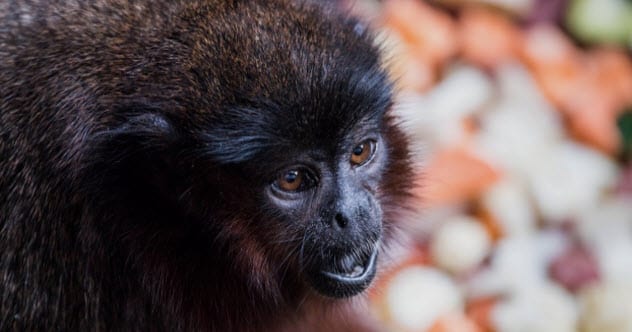 The Jamaican sloth monkeys (Xenothrix mcgregori) were regular South American monkeys until they migrated to Jamaica 10 million years ago. Historians are unsure as to how the animals got to Jamaica but suspect that they hitched rides on rafts formed by fallen trees.

Nevertheless, the monkeys colonized their new home where they slowly turned into sloth-like animals. They became slower than other monkeys and spent most of their time hanging from trees like sloths.

Researchers attribute this to two reasons. First, the Jamaican plains were filled with so much food that the monkeys spent most of their time eating and just hanging around. There was also a shortage of predators, which meant that the monkeys did not do much running around, either.

As a result, they became lazier and less active, which turned them into sloth-like animals. The molars they used for chewing also got bigger. Interestingly, they went extinct 900 years ago. Their closest living relatives are the titi monkeys that live in South America.[5] 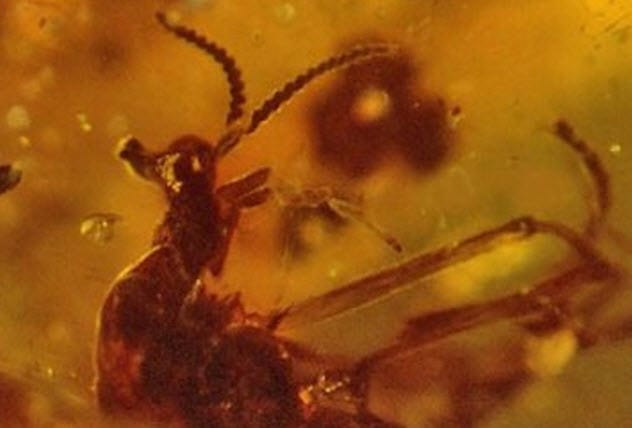 Aethiocarenus burmanicus was the unicorn of the fly world. Just like a unicorn, it had a single horn protruding from its head. Unlike the unicorn and every other horned animal that ever existed, it had three eyes on top of its horn. Researchers say that the insect grew the third eye to see incoming predators.

Researchers got a closer look at the fly when they discovered a fossil that was 97–110 million years old and trapped in amber in Myanmar. They discovered that it fed on pollen and nectar. Besides the weird horn, it also had a weird antenna, longer legs than it needed, and unusually small mandibles that could not allow it to chew bigger meals.

The features that made Aethiocarenus burmanicus unique were the same ones that caused its extinction. The horn and eyes quickly became a burden when the smaller flowers on which it fed became bigger. The eyes could not allow it to feed properly, causing its extinction.[6]

4 Linguamyrmex vladi
The Ant With A Metal Horn 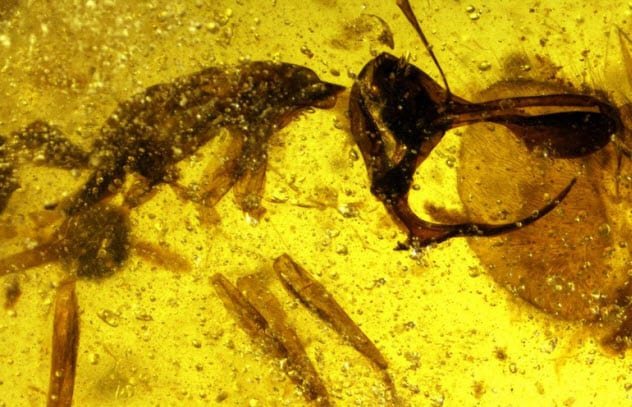 Linguamyrmex vladi (aka “hell ant”) refers to an ancient devil of the insect world. It had a metal horn in place of a mouth. The hell ant used the horn to impale its victim before possibly proceeding to suck its blood. This is why it is also called the “vampire ant” and the “unicorn ant.”[7]

Researchers are unsure as to how the horn worked. They suspect that it operated like the mouth of trap-jaw ants that will shut the moment the hairs in the mouth are disturbed. They also theorize that the ant sucked the hemolymph (the equivalent of blood in insects) with the horn. Thankfully for other insects, the ant went extinct a long time ago. 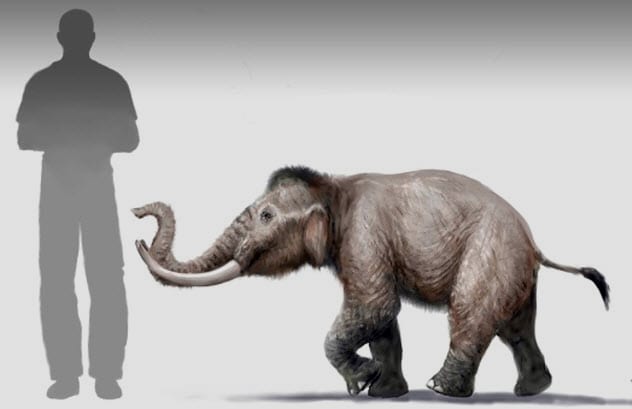 That other fossil belonged to a mammoth that was a mere 1.13 meters (3.71 ft) tall and weighed about 310 kilograms (683 lb). Researchers initially thought that it also belonged to a baby elephant until they realized that the tusk was curvier and the body was too big for a baby elephant.

Mammuthus creticus was a victim of island dwarfism, which occurs when animals stuck on islands evolve to become smaller. This could be nature’s way of adjusting to the limited resources on the island or to the lack of a predator. It has been observed in several animals including elephants, deer, hippopotamuses, and even an extinct species of humans called Homo floresiensis.[8] 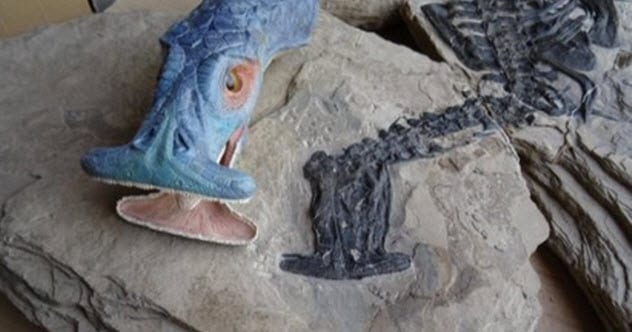 Atopodentatus unicus was described after its fossil was discovered in southern China in 2014. It was named after its bizarre snout, which means “unique strangely toothed” in Latin.

Scientists discovered that Atopodentatus unicus had two sets of teeth.[9] It had peg-like teeth at the edge of its mouth and needlelike ones deep inside its mouth. The peg-like teeth were used to uproot plants from the seafloor. Meanwhile, the needlelike chompers were used as a sieve that trapped plants while allowing the water to flow back into the sea.

1 The Strange Ancient Crocodiles Of The Sahara 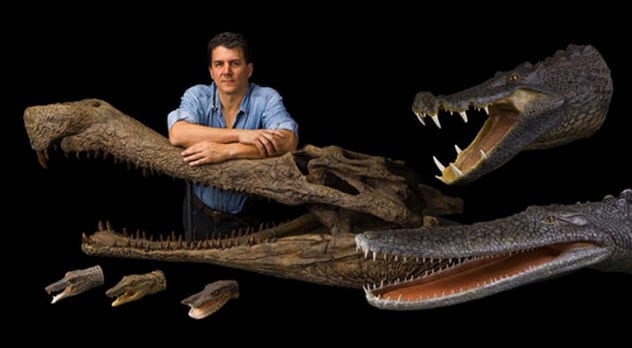 One hundred million years ago, the Sahara was a dense jungle filled with some strange creatures including several species of extinct crocodiles. Researchers have uncovered some of them, and they are downright weird.

One is the 6-meter-long (20 ft) Kaprosuchus saharicus (aka “BoarCroc”) which has its legs under its body and not on its side like modern crocodiles. BoarCroc also had an armored mouth filled with daggerlike teeth. It was nicknamed the “BoarCroc” because its snout resembled that of a boar.

DogCroc also had a doglike snout, while DuckCroc had one-half of its snout longer than the other half. RatCroc had two buckteeth that it used for digging.

The weirdest species was the 6-meter-long (20 ft) Laganosuchus thaumastos that was called “PancakeCroc” because of its unusually flat, 1-meter-long (3 ft), pancake-like head. Researchers believe that the crocodile just rested with its mouth open while patiently awaiting unsuspecting prey.[10]