You’d think as leader of the free world, the president of the United States wouldn’t have the time or interest for a menagerie of exotic pets. But the combined allure of their love for animals and the deep pockets of the American taxpayer made the urge of having more than just a dog impossible to resist. 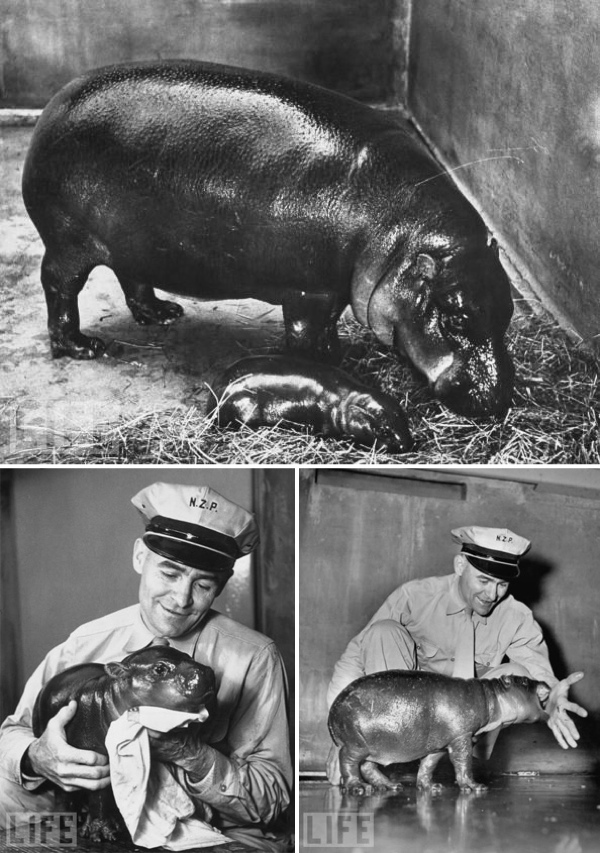 Calvin Coolidge loved animals. If he lived today, you’d likely see him on an episode of Animal Hoarders. He had six dogs, a cat, two lions, a goose, a bobcat, an antelope, a wallaby and a raccoon named Rebecca he would take for walks on a leash. He could’ve easily raised millions for government funding by charging admission to his private zoo, but he didn’t. And when word of his collection found its way to the ears of Harvey Firestone, Billy the pygmy hippo came to the White House. Harvey Firestone was the millionaire mogul at the helm of Firestone Tires. He found a baby pygmy hippo roaming around the desolate plains of Liberia, and for some reason, decided to keep him (probably because of how unfathomably cute he was!). But Billy wasn’t cute anymore; he was 600 pounds and over six feet long and in addition to being a handful, he was too expensive for even a millionaire to feed! He presented Billy as a gift and the president graciously accepted. The president kept him for the duration of his presidency, and then donated him to the Smithsonian National Zoological Park because pygmy hippos were severely endangered at the time. Billy turned out to be quite the virile little pygmy hippo, fathering 23 baby hippos in all—making almost every hippo inhabiting zoos in the US today traceable to his genes. 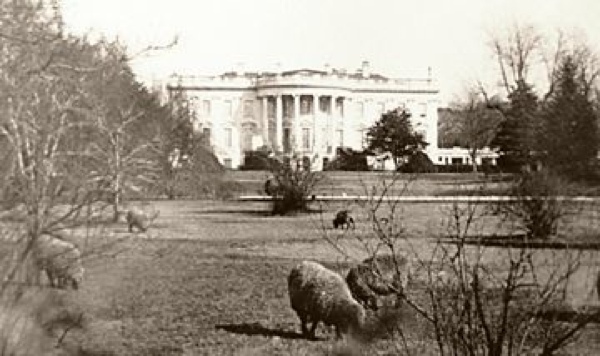 The slogan for Woodrow Wilson’s re-election bid in 1916 was “He kept us out of war”, so the least he could do when he was forced to declare war in 1917 was make it as cheap as possible. He scoured the budget looking for any way he could to cut costs, and he found it in an odd place: the groundskeeping costs of the White House Lawn. Wilson couldn’t just sit back and watch the American taxpayer get raked over the coals by evil landscapers, so he enlisted the help of a flock of sheep. The sheep walked the White House lawns grazing on trees, shrubs and grass, and when summertime came along, Wilson shaved their wool and sold it to raise money for the Red Cross relief effort overseas. His favorite sheep among them was Old Ike, a large ram that was known for chewing tobacco when he wasn’t on the job. After the flock’s breeding got out of control and the president was faced with 18 of them running around, he auctioned them off and donated the proceeds to the Salvation Army. 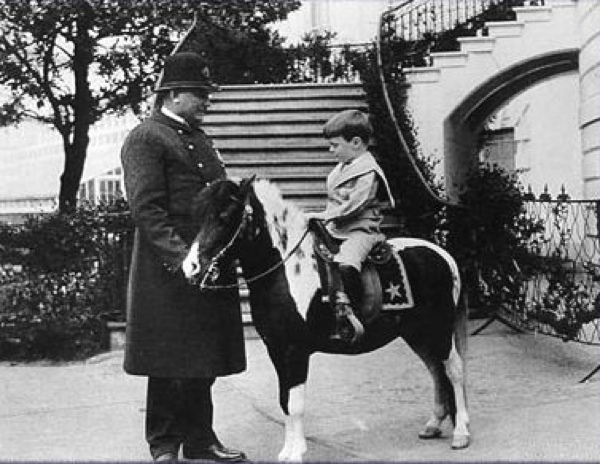 Archie Roosevelt may be the only kid in the history of the world who screamed, “I want a pony!” and actually got one. Teddy and his family had many pets—a macaw, rats, and a snake among them—but none of them were as notorious as Algonquin, their calico pony. One day, when Archie Roosevelt was sick in bed with the measles, footman Charlie Reeder helped the Roosevelt children sneak the pony up the White House elevator and into Archie’s room to cheer him up. He was so happy to see the pony, he dived towards it, startling it and causing it to slip and fall, creating a loud crash that startled everyone in the White House. Teddy is said to have scolded the children for the incident, but it was mostly out of concern for the pony. In fact, practically everyone in close proximity to the Roosevelts during their time in the White House claimed that Teddy loved every animal they had, and played an active role in each of their lives. 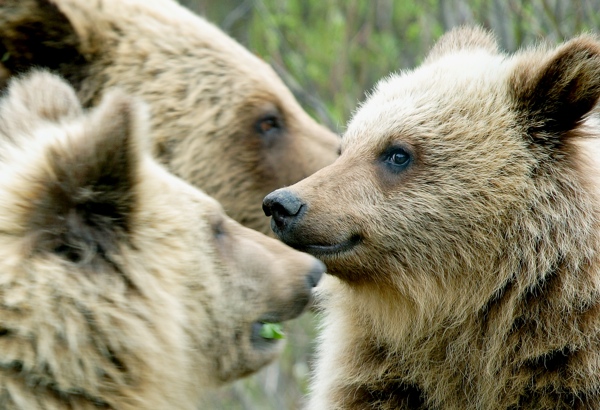 In 1803, Thomas Jefferson ordered several explorers on expeditions westward in an attempt to find out what lay within the terrifying endless wasteland of trees better known as the Louisiana Purchase. One of these explorers, Captain Zebulon Pike, captured two wild, ferocious grizzly bear cubs, and couldn’t imagine a present better suited for Jefferson. Jefferson liked them, and described them as “perfectly gentle”, but they quickly got too big and he arranged for them to be taken to a museum in Philadelphia. Like most simple things the government does, the process took months, and in the meantime, he locked the grizzly bears inside small cages on the White House lawn. When the cubs finally arrived at the museum, they broke out of their enclosure and wreaked havoc over the entire building, eventually cornering the museum owner in the kitchen, at which point they were killed. However, they were still stuffed and displayed—because heaven forbid the museum not get a profitable exhibit out of the ordeal. Some animals are best left in the wild. 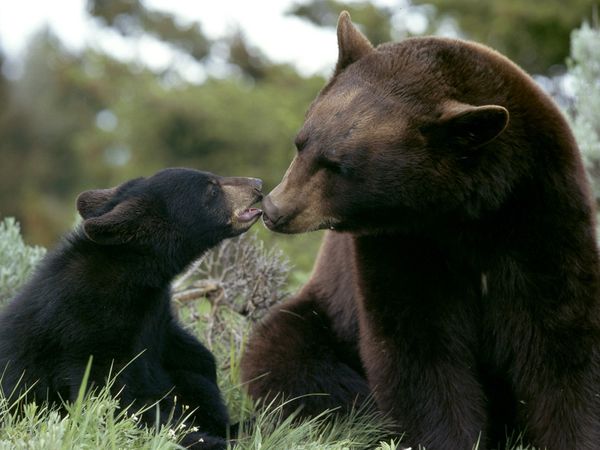 Republicans from West Virginia gave Teddy Roosevelt a black bear that was found in the wild and completely untamable, like some sort of sick joke. Teddy wasn’t laughing though; in fact, he loved it! He would put it on a leash and take it for walks, feeding it honey and nuts and even rough-housing with it, as if it were a giant angry dog. He even named it Jonathan Edwards, after a Puritan minister who was a long lost ancestor of his wife, Edith. Teddy himself described it’s demeanor as “a temper in which gloom and strength were combined in what the children regarded as Calvinistic proportions.” In other words, he was really mean. Like many other presidential animals, the bear became too much of a liability and was donated to the local zoo. 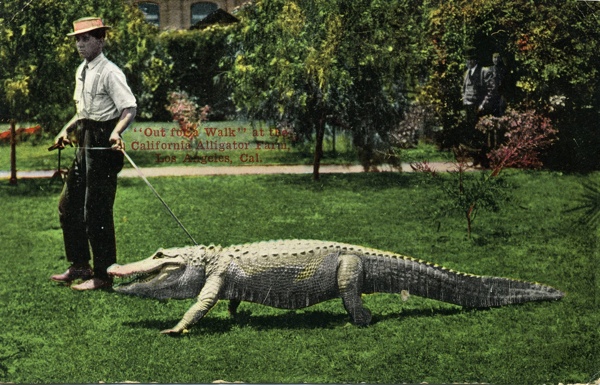 Marquis de Lafayette was a French general who led troops during the American Revolution. While visiting the White House, he gave his good friend, John Quincy Adams, the gift that keeps on giving—a pet alligator. Adams is said to have been puzzled by the gesture, and even more puzzled when asked what he would do with the creature. He decided on a home that was nothing short of absolute genius: the bathtub of the East Room bathroom. At first it was nothing but an obligatory nuisance to honor his friend Lafeyette, but after a while, Adams is said to have actually enjoyed his new pet. When dignitaries would ask him to show them to the restroom, he would lead them to the East Room, watch as they ran out of the bathroom in terror, and laugh like a maniac. 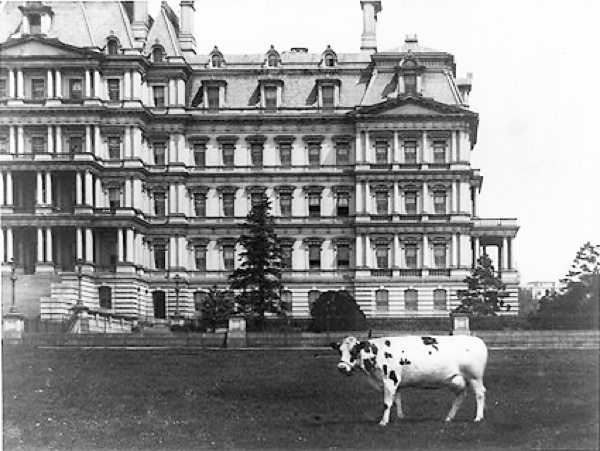 President William H. Taft had a massive family. For years, the presidential milk was provided by their cow “Mooley Wooly”, but when she was no longer able to produce enough milk for the 300lb president and his family, she was sent to play on a farm in upstate Wisconsin. By complete coincidence, Wisconsin Senator Isaac Stephenson bought Taft a Holstein cow that he named Pauline Wayne. The entire Taft family is said to have taken an instant liking to the bovine, and for the remainder of their years in the White House, Pauline freely grazed throughout the White House lawn and provided plenty of milk for the family. After that, she was trucked back to Wisconsin, where she was resented by all the other cows for being famous. 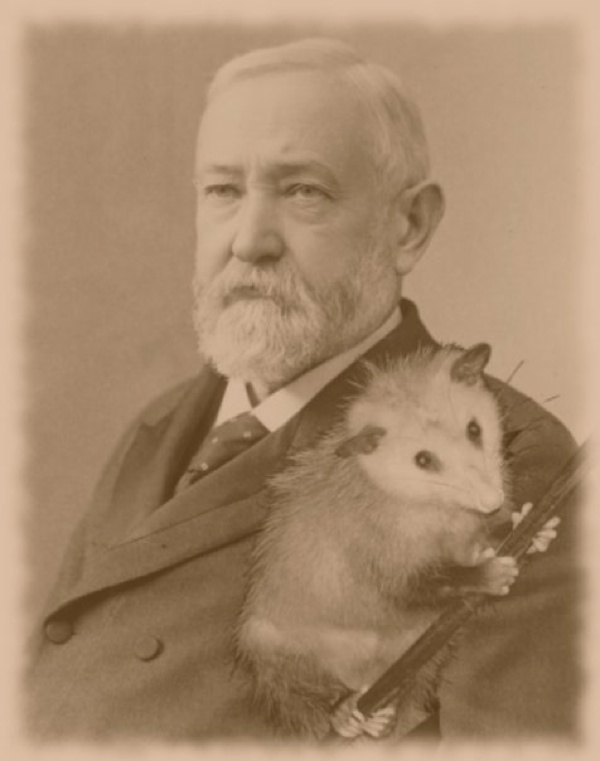 Benjamin Harrison loved his animals so much, he wore them. At least that was the case with his two opossums named Mr. Reciprocity and Mr. Protection. Fellow legislators recall seeing him pace around with the opossums frantically climbing on his legs and shoulders, but nothing could humiliate him more than his pet goat, Old Whiskers. Apparently, he was well known for being one of the crankiest goats in the history of the world, and disliked being used as the muscle behind the private stagecoach of Harrison’s grandkids. One day he was pulling them around the lawn when he suddenly decided to make a break for it. He charged out of the White House gate and ran up and down Pennsylvania Avenue. The president and several aides chased after him for several blocks, and after they finally caught him, the children were much more apprehensive to deem him their personal clydesdale in the future. The goat wins. 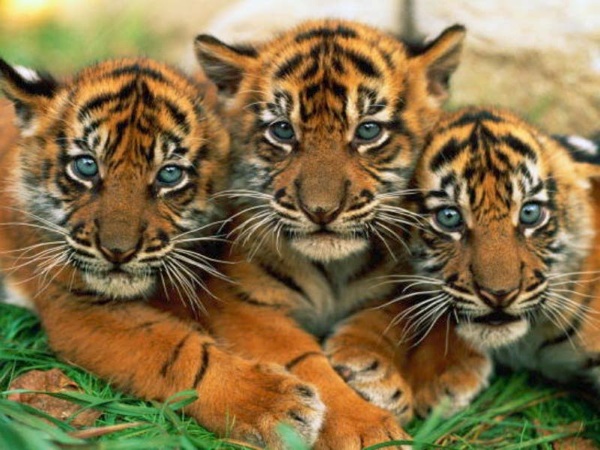 Martin van Buren may have gone down in history as one of the most hated presidents of all time, but not everyone hated him. The Sultan of Oman liked him so much that as a gesture of friendship, he gave him a pair of tiger cubs. The president was known for his excess and fancy dress, so it came as a shock to everyone that he really liked the cubs and wanted to keep them. Leave it to congress to ruin everything. Technically, the cubs weren’t gifted directly to him, they were the property of the people of the United States of America. Crestfallen, he loaded the cubs into a shoebox and donated them to the local zoo, after pouting during the entire carriage ride there. 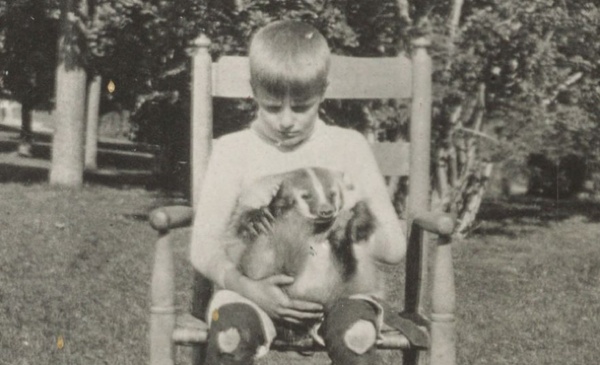 Teddy Roosevelt was visiting Sharon Springs, Kansas when he was asked by a little girl if he would like a baby badger that she and her brother had just caught. He didn’t just accept, he was beside himself with joy. He bottle-fed the badger and kept it in the front platform of his presidential train on the long ride back to the White House. Along the way, he stopped at various other cities where he showcased the animal to young schoolchildren and accepted other animals as gifts, including two bears, a lizard, a horned toad, and a horse. When he finally arrived home, he filed down the teeth of the badger and set it loose throughout the White House. It apparently hissed and spat and when a person would casually walk past it on their way to another part of the house, it would charge and nibble on their ankles. Eventually everyone was tired of being hunted, and they donated it to the Bronx Zoo.