American artist Ron English is what many people call a subvertiser—through his art he breaks down iconic images from pop culture and advertisements, changing the message into something entirely different – usually the opposite of what was originally intended. As a result, most of his art makes a satirical statement, commonly along the lines of political, religious, or consumerist—but no matter what the message may be, the art stands alone as something incredible.

The majority of his work shows up overnight on billboards—illegally—like the now famous “Camel Kid” ads featuring a young Joe Camel offering cigarettes to kids, or the McDonald’s ads featuring an overweight Ronald McDonald and some not-quite-subtle comparisons to idol worship.

But it’s with Ron English’s oil paintings that he really brings to life a unique mash-up between the classic and the modern. Sometimes the message is obvious; sometimes it’s a little more open to interpretation. Here are ten of his best pop culture versions of famous paintings, with some boring art history drivel on the side. 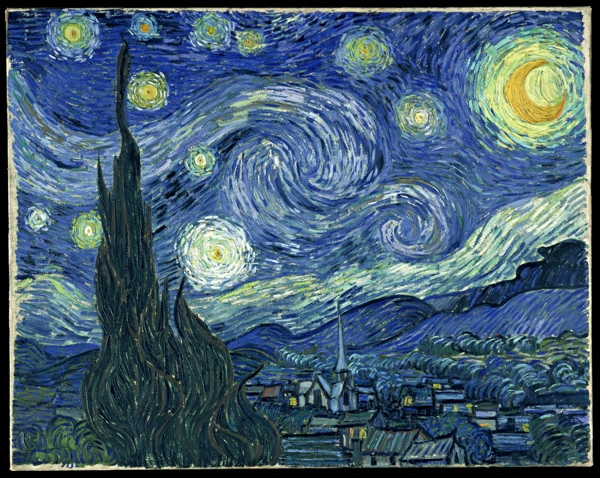 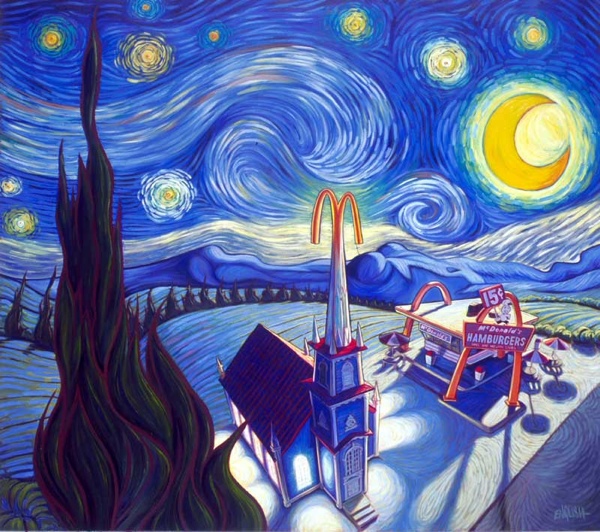 The Starry Night is one of the most famous paintings by Vincent van Gogh. It shows a stylized version of the town of Saint-Remy as seen from the window of the mental hospital where van Gogh was living at the time, in 1889.

According to Ron English, what he saw out of his window was a sea of advertisements, and with that he made his own version, entitled McStarry.

9
Virgin of the Lilies 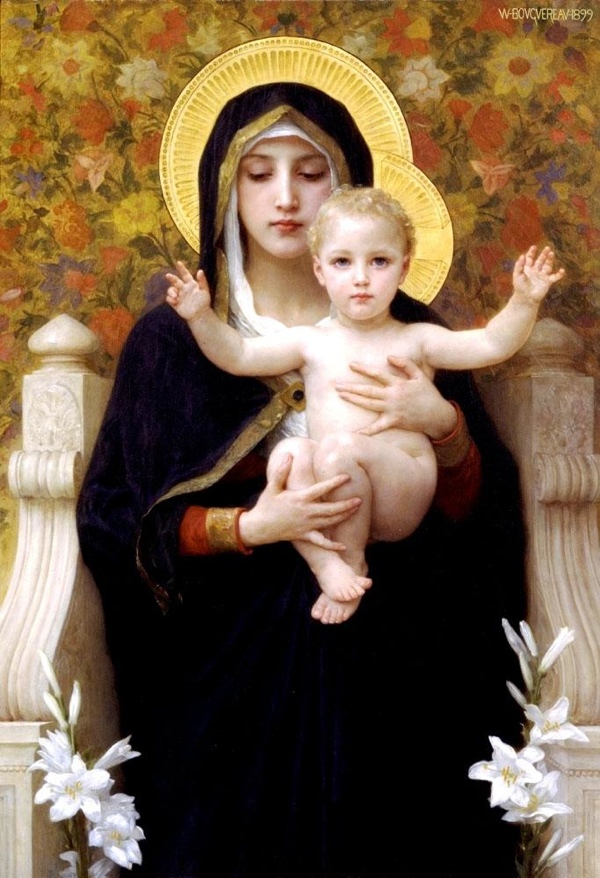 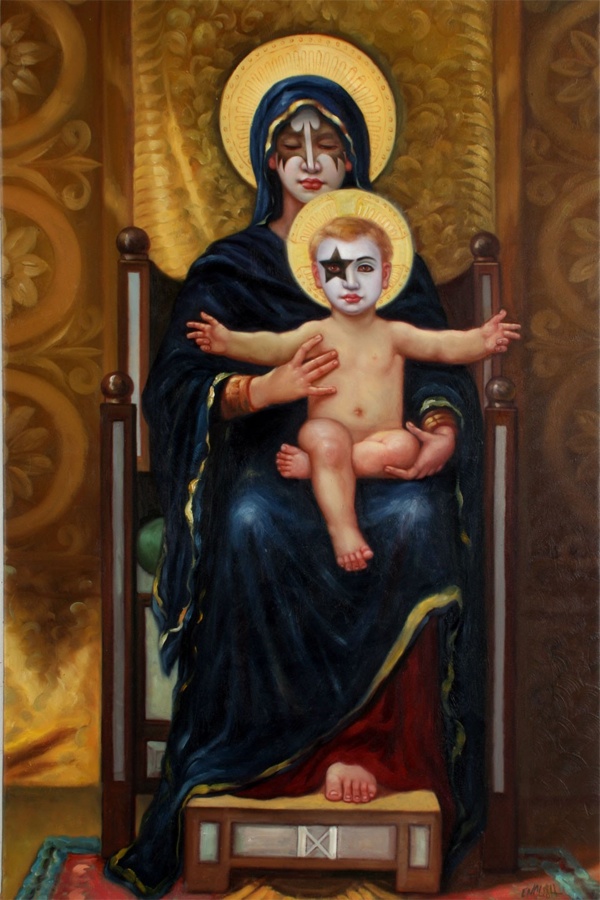 The Virgin of the Lilies is a painting by William Bouguereau from 1899. It shows a peaceful Virgin Mary holding the infant Jesus, who even as a child has assumed a pose of authority with his outstretched arms. The halos around their heads were typical of Catholic art from that time period.

As another statement on pop culture gods, English’s version puts the well-known KISS face paint over the two subjects, effectively turning Mary into Gene Simmons and Jesus into Paul Stanley. 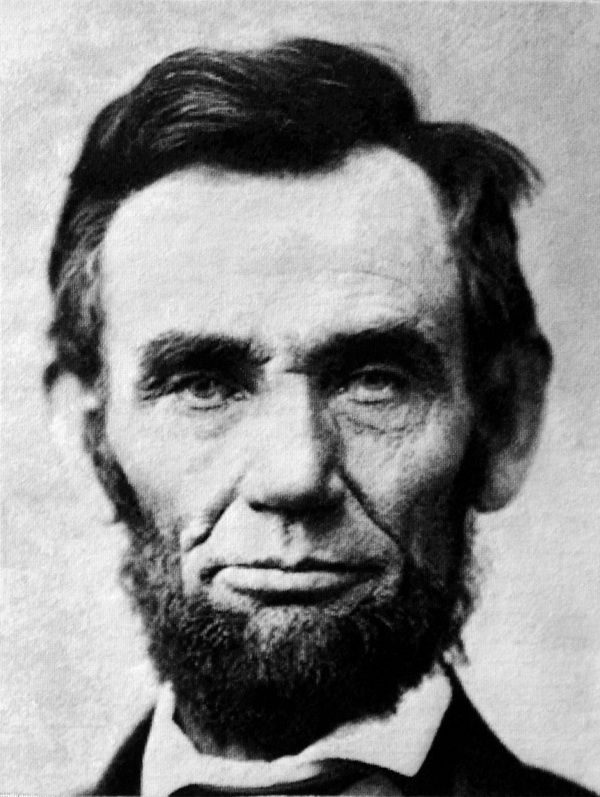 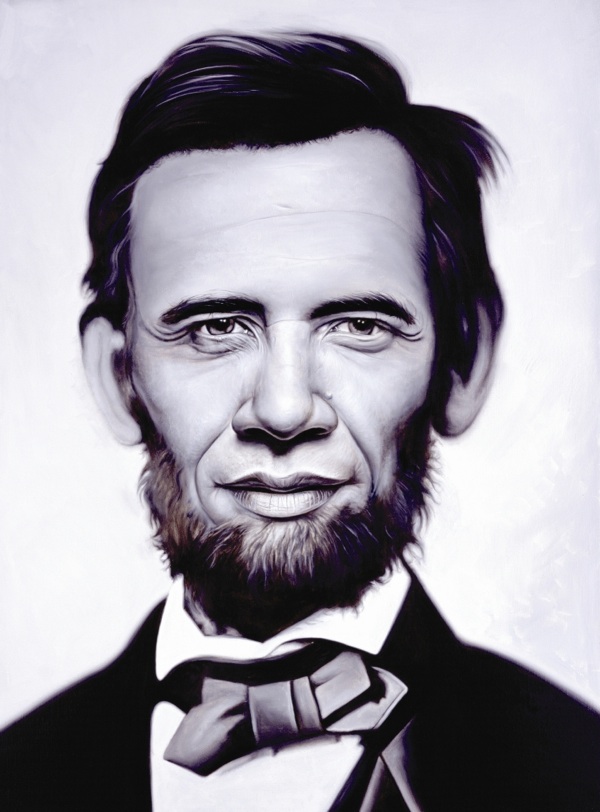 In 2008, Ron English created Abraham Obama, a surprisingly subtle amalgamation of the faces of both presidents. This has since become one of his most famous political images, unless of course you want to count Incredible Barack.

After the village of Guernica was bombed in 1937, Pablo Picasso created this massive oil painting, entitled Guernica, in an attempt to capture the suffering of the villagers. It has since become one of his most popular pieces and is often held up as a symbol for anti-war efforts.

Ron English’s version features grade-school children in the same horrific poses as the original, surrounded by carousel animals while a young boy in the center drops bombs from a toy airplane. It’s entitled Guernica Go-Round. He also created this one, which features Mickey Mouse dropping bombs from the plane.

6
The Luncheon On The Grass 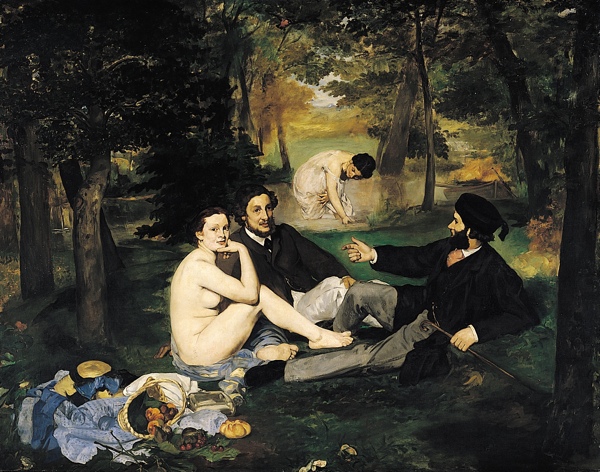 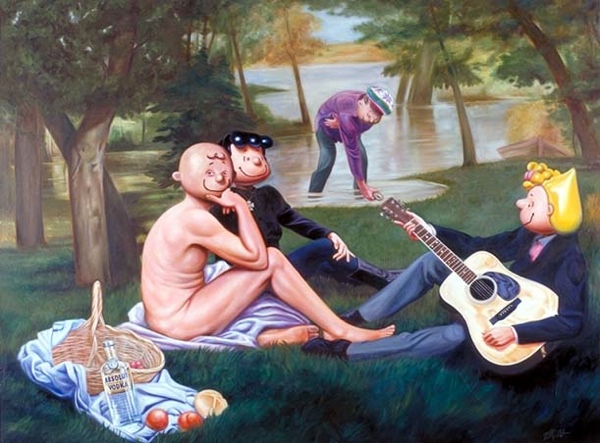 The Luncheon On The Grass, or Le dejeuner sur l’herbe in French, was painted by Edouard Manet. The original itself was shocking at the time for featuring a woman who is not only nude, but nude despite the two men she’s with, who are fully clothed. Even more unusual is the way the two men seem to be holding a conversation and ignoring the woman completely.

The Ron English version sort of speaks for itself. It’s the same painting, but the figures are replaced with Peanuts characters Charlie Brown, Lucy, and Sally. The roles are also reversed—Charlie Brown is the nude, while Lucy and Sally are clothed. 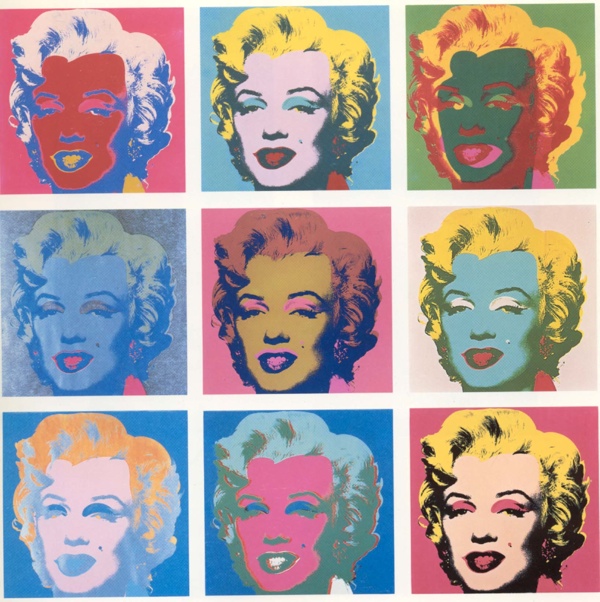 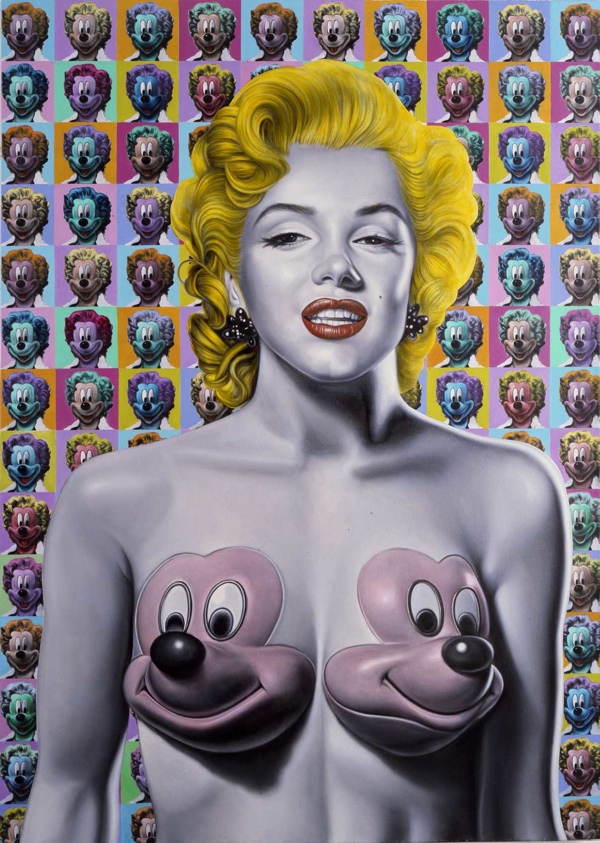 Andy Warhol almost single-handedly created the American pop art movement, and the most enduring image from the time is his silkscreen print series of Marilyn Monroe, which he created after her death in 1962.

Ron English took the sex symbol in a new direction in his own version, which is actually more of an homage than a “version.” His oil painting features Marilyn Monroe topless with the face of Mickey Mouse in place of each breast. The background of the painting has a repeating series of Mickeys with Marilyn’s hair in a shifting color pattern. 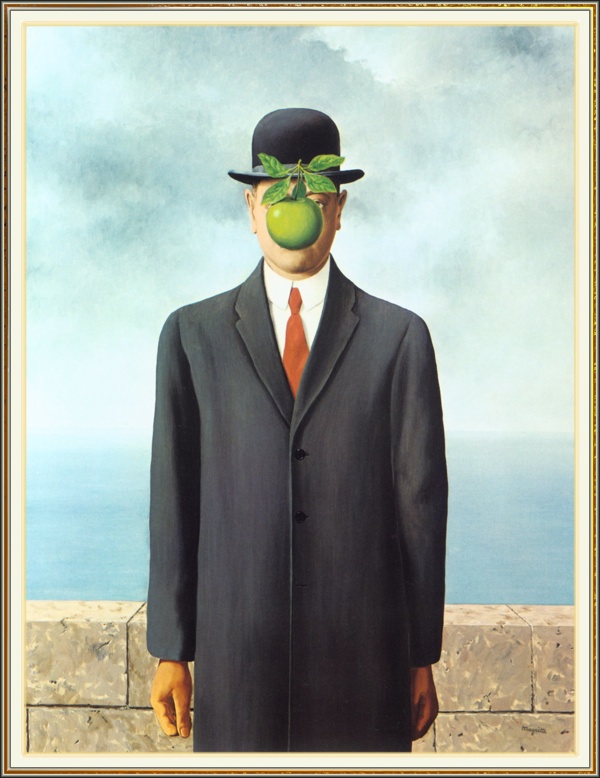 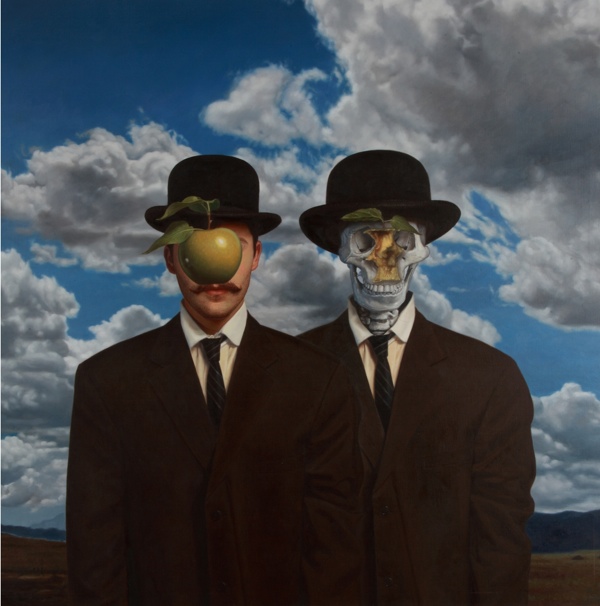 In 1964, Rene Magritte painted the surrealist The Son of Man, which has a man in a suit and a bowler hat, with an apple in front of his face. The artist described the painting as an example of how everything that can be seen is actually hiding something else.

In Stereo Magritte, Ron English recreated the man and the apple, but placed them beside another subject—a skeleton wearing the same clothes as the man, with a spoiled apple core in front of his face, probably signifying life and death. 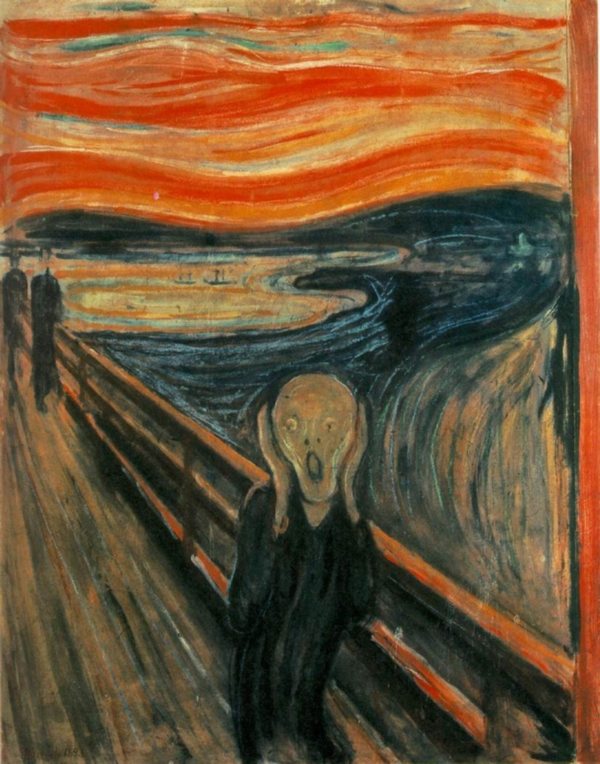 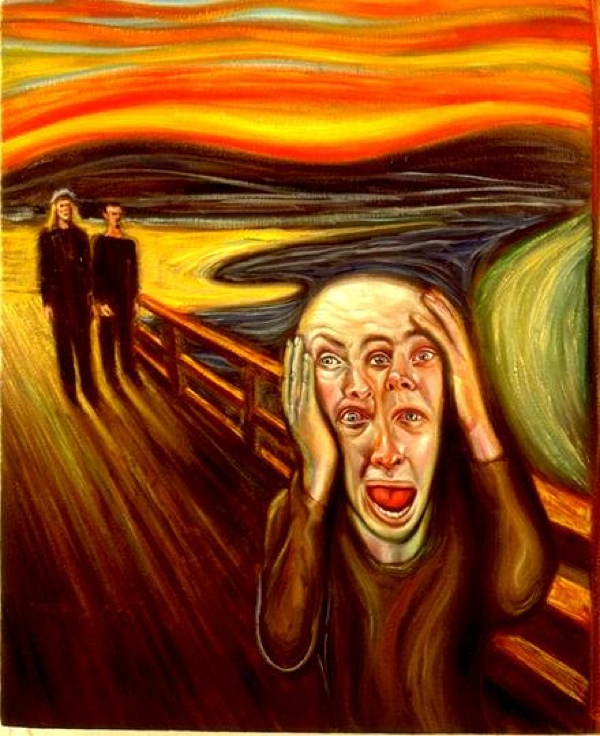 Edvard Munch’s The Scream is probably the most recognizable painting in the world. There are actually four versions of The Scream, which were done at the end of the 19th century.

Ron English’s version, Harmonic Scream, is quite a bit different. In keeping with his usual style, the figures in the painting are most likely members of a band. 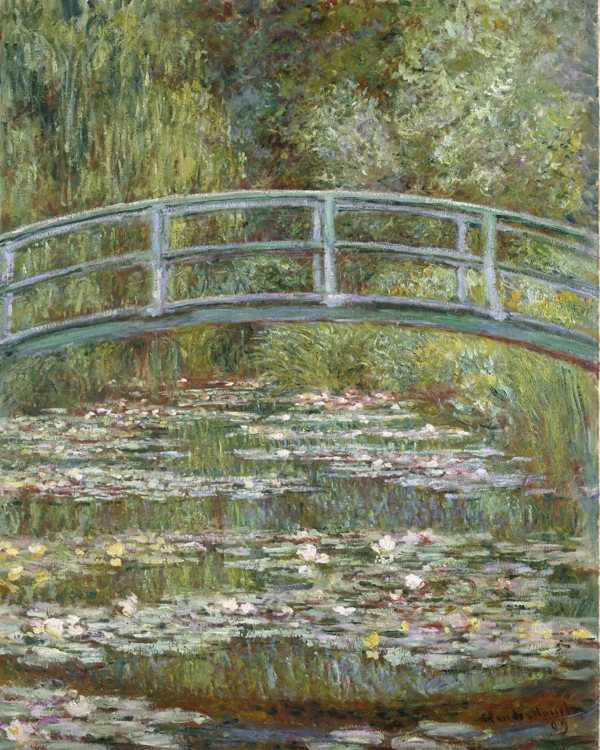 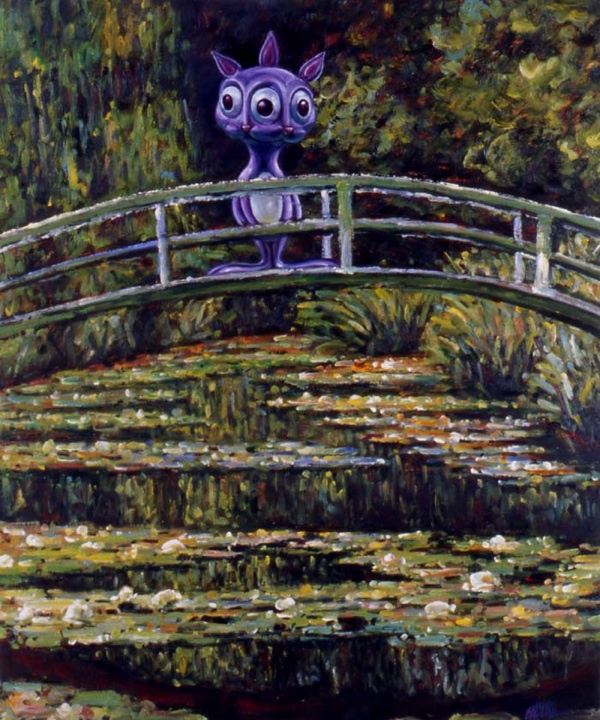 From 1893 to 1900, Claude Monet created a series of paintings that focused on a bridge over a small pond on his property. This series contains some of the most famous pieces of the Impressionist period.

The version by Ron English uses noticeably darker colors and features the “Bunny Rabbit,” a creepy figure that shows up in a lot of other Ron English paintings as well. While the background and foreground are painted in the style of Monet, the Rabbit is a lot crisper and more modern looking. 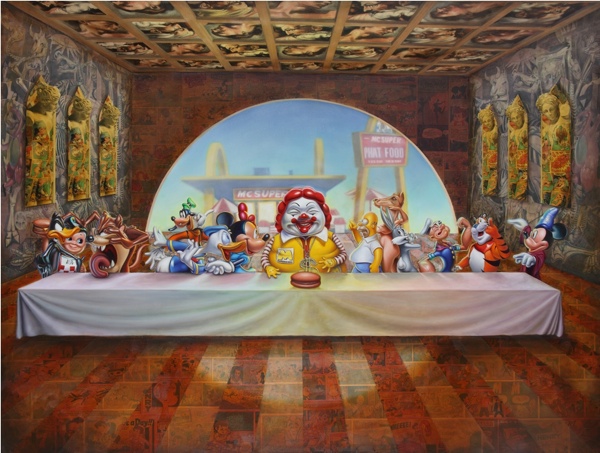 The Last Supper is one of the most iconic paintings in the world, depicting Jesus Christ sitting down for his final meal with his twelve disciples. It was painted in the late 1400’s by Leonardo da Vinci.

According to Ron English, with different times come different gods, and so we get his take, Super Supper. The parallels are obvious, and it makes an incredible visual. There’s another version here.