There are over 4,800 different species of frogs that can be found all over the world. The different environments experienced by these frogs have resulted in many bizarre looking species that we can find today. In this list, we will learn more about the most fascinating and unusual frogs known to man. 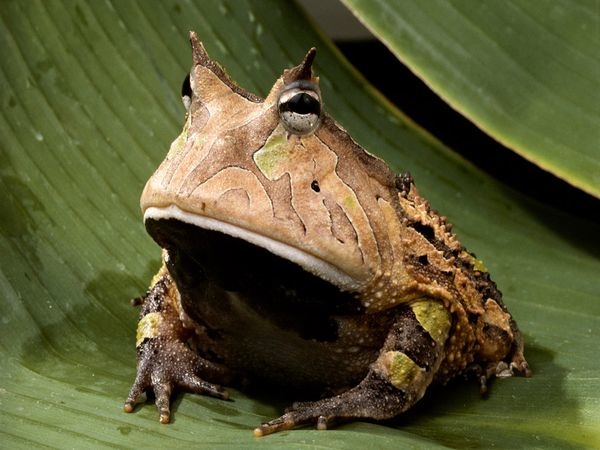 This amazing frog is found in the Amazon Rainforest of South America. The Brazilian Horned frog, Ceratophrys aurita, has a distinct appearance compared to other amphibians. Evolution has hidden this creature well, disguising it as a leaf to blend into its surroundings.

The frog can grow to a large size, reaching a length of twenty centimeters. It buries itself in leaves so only its head is visible and when anything walks past, it’s quickly snapped up and eaten. It is a very aggressive animal and local villagers often wear large leather boots to protect their feet from the powerful bites. Despite their aggressive nature, some people keep these frogs as pets. 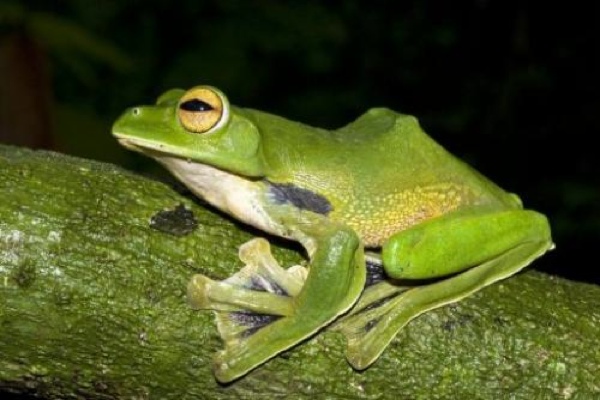 This newly discovered frog was first documented in January this year, so there is little information on this creature. However, we do know that this frog can fly using its huge webbed feet. It glides across the forest canopies of South Vietnam to escape predators and female specimens have flaps of skin on their arms to aid flight. Its large feet are used to stick to tree branches after gliding. Helen’s Flying frog—Rhacophorus helenae is quite large, reaching ten centimeters in length.

It was discovered in Vietnam near Saigon by an Australian scientist. She named the frog after her mother. What amazes biologists is that it is so large and lives so close to Saigon but has remained undetected for so long. 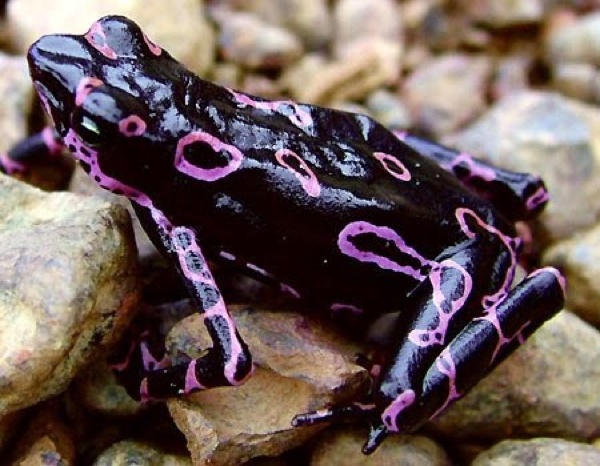 The Variable Harlequin toad—Atelopus varius—is native to Costa Rica and over the past few years, due to the spread of a fungus and changes in climate, its numbers have decreased rapidly to a single isolated population. The species is now dangerously close to extinction.

The toad’s colors (which can be purple, black or yellow) warn predators to stay clear as it has a powerful toxic poison, which is 100 times stronger than potassium cyanide. The only creature that poses as a threat to the Harlequin toad (apart from humans) is a parasitic fly which lays its eggs on the frog’s legs, allowing them to burrow inside. They then eat the frog’s internal organs, eventually killing it. 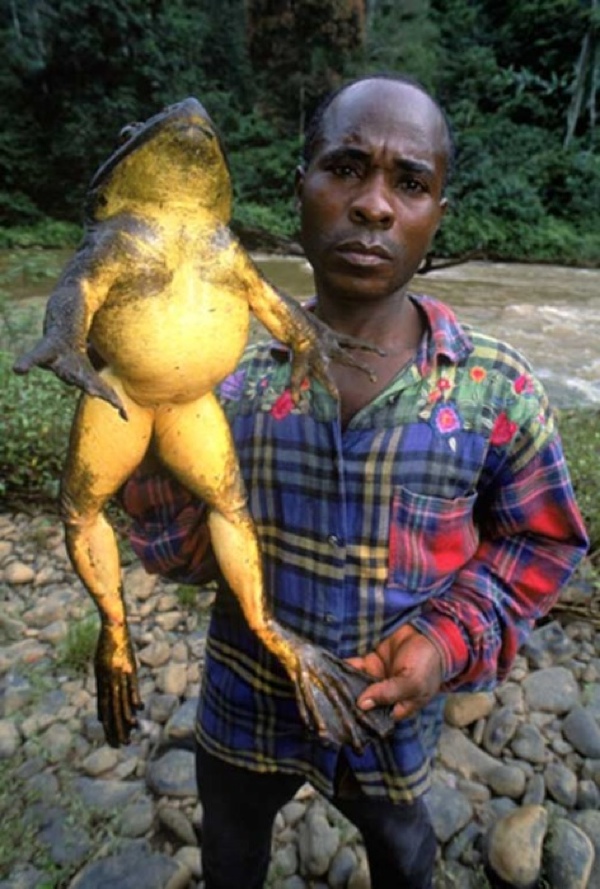 The Goliath frog—Conraua goliath—is the largest frog on Earth. It can grow up to thirty-three centimeters in length and can weigh up to three kilograms. The giant African Bullfrog is only half the size of the Goliath frog.

The creature is native to west Africa. It eats crabs, small snakes and even other frogs. The Goliath frog makes no sound due to the lack of a vocal sac. It has huge, powerful legs that allow it to jump a great distance—up to three meters (10 feet). Unfortunately, like many other frog species, the Goliath frog is vulnerable to human activity such as hunting, deforestation and the pet trade. These factors have now made the frog an endangered species. 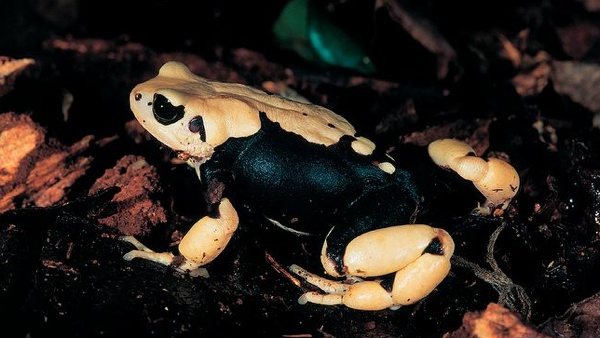 Endemic to the tropical forests and grasslands of Tanzania, the Morogoro Tree toad—Nectophrynoides viviparus—has large glands on its body near the eyes and the limbs. These glands can be a wide range of colors including orange, grey, green, red and white. The color of the glands usually contrasts to the rest of the frog.

The eggs hatch while inside the female and they are released as small, but fully formed toads. This type of gestation is rare amongst amphibians.

Typically found in mountainous regions with lots of steep slopes is the Venezuelan Pebble toad—Oreophrynella nigra. When faced with danger, such as a tarantula, (one of the toad’s main predators), it tucks its head and limbs under its body and then tenses its muscles. It forms a ball shape and then rolls down the nearest hill, landing in a puddle or crevice at the bottom.

They do not take any damage from rolling and bouncing because they are so light and their muscles are very strong. The frog uses this defence mechanism because rolling is a lot faster than jumping and it cannot jump very far.

The Vietnamese Mossy frog—Theloderma corticale—is found in the tropical forests and marshes of northern Vietnam. The name comes from their distinct form of camouflage which resembles moss and lichen. When predators approach, the frog hides by curling its legs inwards, so only the mossy body is visible. It has large pads on its feet to stick to trees and its diet consists entirely of insects. The frogs lay eggs on cave walls and the tadpoles fall into the water below, where they spend the rest of their lives. The Vietnamese Mossy frog is also a popular pet in Asia.

The Turtle frog—Myobatrachus gouldii—is found in semi-arid regions of Western Australia. It has a very unusual appearance, and looks like a shell-less turtle, with a round, pinky-brown colored body, a tiny head and stubby limbs. Their limbs are short and muscular, allowing them to dig through the sand and to break open termite mounds, which is the frog’s main food source.

The Turtle frog skips the tadpole stage and grows into a fully formed frog while inside its egg. For this reason, the eggs are the largest out of any other frog in Australia, measuring 5 to 7 millimeters in length.

This frog has been featured on listverse before but it definitely deserves a place on this list. The bizarre-looking Glass frog—Centrolenidae—is also native to the Amazon basin.

These frogs are green but have transparent skin on the underside of their bodies. This allows their liver, heart and intestines to be seen clearly. In pregnant female specimens, even frogspawn is visible inside. It is thought that the transparent skin serves as protection, allowing light reflected off leaves to shine through the frog. This makes it harder for predators to spot. They live in the trees of humid, mountainous areas and lay their eggs on leaves. The tadpoles then drop into the water below and continue their growth to the adult stage. 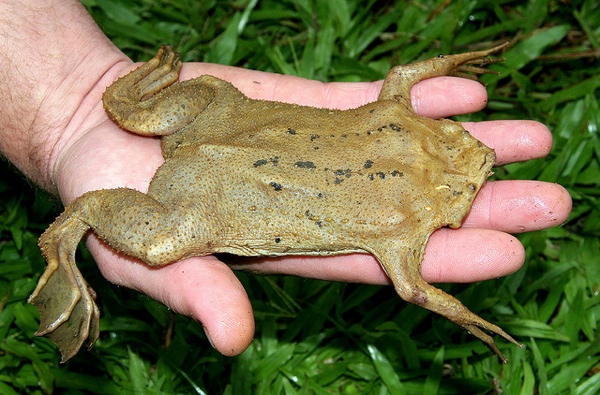 At number one is the Surinam toad—Pipa pipa. Like many other frogs, it is found in the tropical rain forests of the Amazon. It is a large toad, and can grow to twenty centimeters. Compared to other species, it has tiny eyes and an extremely flat body. it’s usually mud-brown in color and it has no tongue or teeth. When searching for a mate, the Surinam toad does not croak like normal toads, but instead strikes two bones in its throat together to produce a high-pitched clicking noise.

Even more bizarre are the toad’s spawning and reproductive techniques. In a body of water, the male attaches to the female, forming what is known as an amplexus. Then the pair jump out of the water several times. The female releases a few eggs after each jump, and these eggs implant into the back of the creature—through the skin. These eggs move further into the body and they develop into fully formed toads inside these pockets. Then they burst out of the skin during birth. 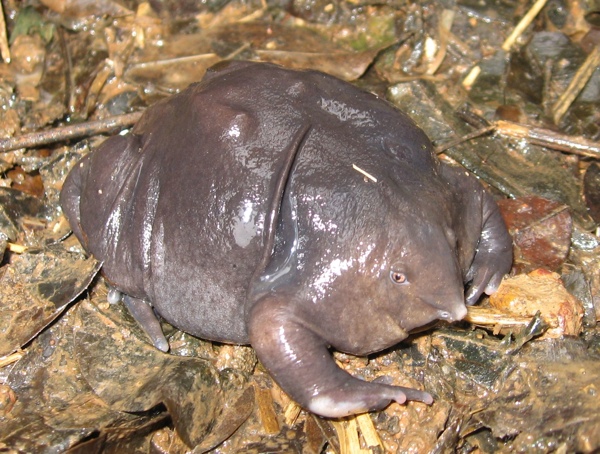 Found in the mountains of southern India, the Purple frog—Nasikabatrachus sahyadrensis—is a unique species of frog and the only member of the Nasikabatrachidae family. It has smooth, purple skin and a large, round body with stumpy limbs. The head is small and it has a pig-like nose. The Purple frog spends most of its life underground and only leaves its tunnel for two weeks every year. This species has evolved independently for 130 million years and its closest living relatives are the Sooglossidae frogs of the Seychelles.

Caleb is a Listverse author and moderator from Cornwall, UK. You can follow him on twitter: @ComptonCaleb