There is certainly no shortage of people who are afraid of certain animals. Spiders and bees would be among the most common and least rational examples of such fears. But there are certain instances when they can deal some serious damage. Examples of more rational fears would be of alligators, or snakes: Most of us don’t know much about them and there are plenty of them that can really hurt us. But even if you don’t scare easily, there are certain animals that just look plain freaky. And these only get worse when you magnify them. 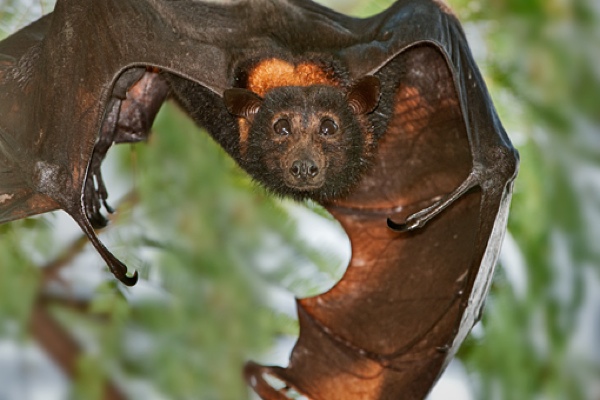 The black flying fox, found in Indonesia, Papa New Guinea, and Australia, is the largest bat in the world. Unlike some of its relatives, such as the vampire bat, black flying foxes are mainly herbivorous. While they may be unlikely to attack you, that doesn’t mean they are any less terrifying to see. The average black flying fox will have a wingspan of 1 meter, but their wings can grow to be twice as wide as that. There’s no denying that seeing a bat more than twice as wide as you are tall flying towards you at 25mph would be more than a little scary. 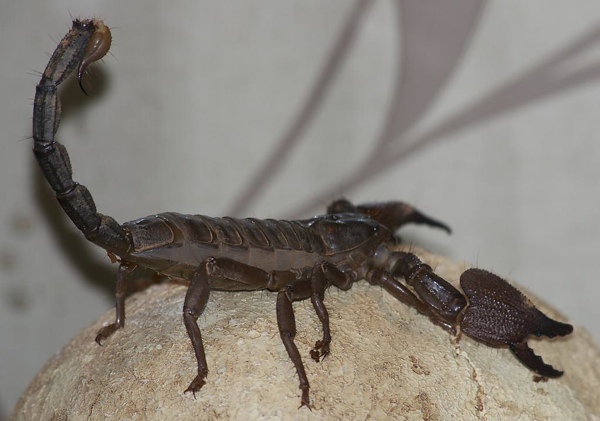 While many people believe the Emperor scorpion to be the biggest of their kind, that title actually goes the indian giant forest scorpion (Heterometrus swammerdami). These scorpions can be found in India, Malaysia and Asia, and can generally grow to be about 8 inches long. Apart from being larger than the emperor scorpion, they are faster, more aggressive, more likely to attack and have a more painful sting. The largest recorded specimen was 9 inches, according to the Guinness Book of World Records. 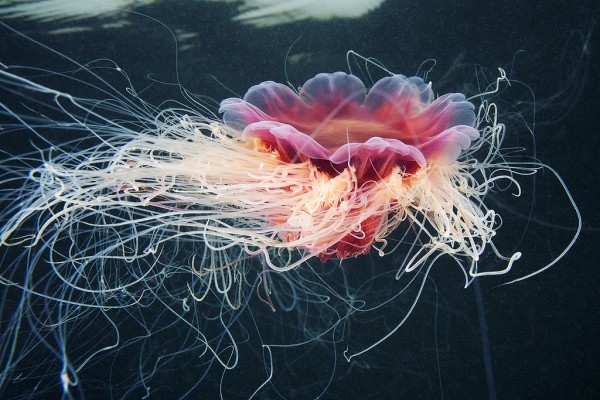 The lion’s mane jellyfish (Cyanea capillata) is found in the northern Arctic, Atlantic and Pacific oceans. Their tentacles can grow to be as long as 15 meters, and while their sting is not lethal, it can still be extremely painful. Alexander Semenov—the famed underwater photographer—has only seen the behemoth twice in ten years of diving, and didn’t have a camera the first time. Despite wearing a mask, he still got stung in the face, and says his lips were “as big as Angelina Jolie’s, but not so beautiful”. The jellyfish will eat almost anything, including other jellyfish, and Semenov says he could see other, smaller jellyfish alive inside the lion’s mane’s stomach. The Portuguese man o’ war has gained a lot of infamy through the years for its sheer size, with its stingers able to reach up to 50 feet in length, although this isn’t technically a jellyfish. 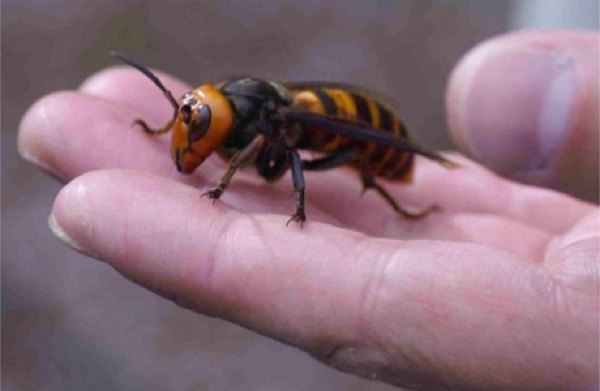 The asian giant hornet (Vespa mandarinia) is the largest hornet in the world, found mainly in East Asia. They can reach up to 2 inches in length, which doesn’t sound like much until you consider that the average hornet is only about 0.7 inches. Apart from being over twice the size of regular hornets, their sting is reported to be excruciatingly painful. Using a stinger that measures 1/4 of an inch, the Asian giant hornet can inject you with a venom powerful enough to dissolve flesh. 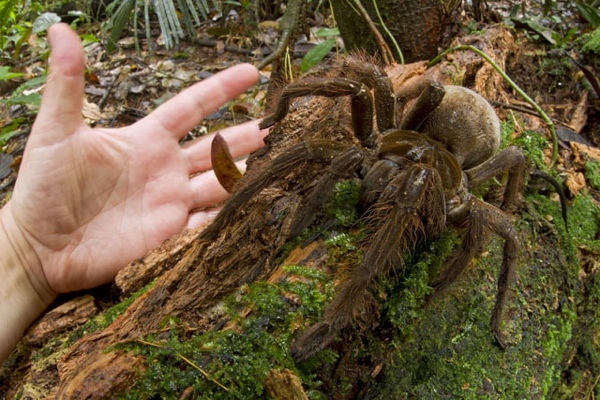 Found mainly in the Northern half of South America, the Goliath bird eater is the largest of all tarantulas in the world, with a leg span of 1 foot. As you may have guessed, this particular spider eats birds, making it a lot more terrifying than your average house spider. They spend most of their time living in their burrows (or burrows they’ve stolen), and only venture out a few feet to feast. To make matters worse, not only do they eat birds, they can, unlike most spiders, hiss at perceived threats, their bite is quite painful, and they can flick their hair at you, which can be extremely irritating to skin, eyes and lungs. They are considered to be extremely aggressive, and it is advised against keeping them as pets. 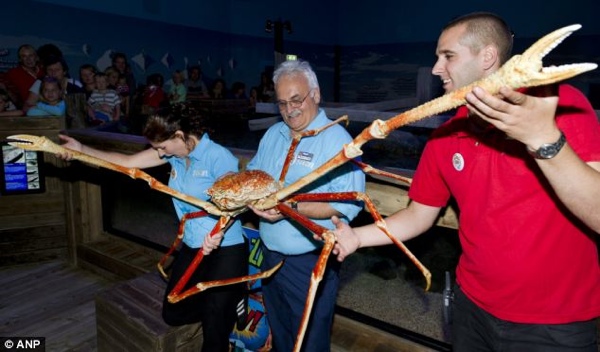 The Japanese Spider Crab (Macrocheira kaempferi) is the largest type of crab in the world, with a leg span of 12 feet, making it the largest of any anthropod, and is found in the waters around Japan (surprise!). They can be found anywhere from 600 feet below the surface to as shallow as 50 feet. One was caught in the Pacific Ocean in 2009. Nicknamed “Crabzilla”, he’s the biggest crab ever to be exhibited in Europe. While Crabzilla was only 40 years old, Japanese spider crabs can live to be 100. 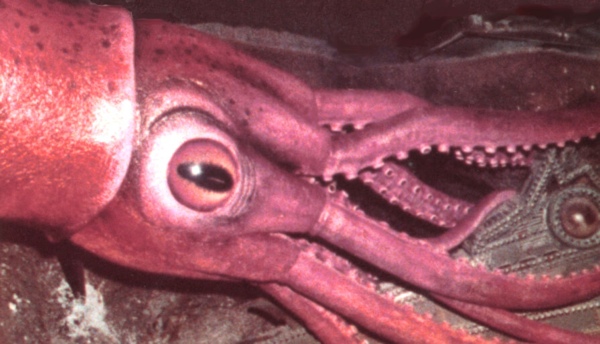 Not much is known about the colossal squid (Mesonychoteuthis hamiltoni) as few have ever been found, but the ones that have been found have lived up to the name. In 2007, one became tangled in hooks on a fishing boat, and it took the crew 2 hours to haul the squid on board. The first reports of colossal squids come from 1925, when 2 tentacles were found in a sperm whale’s stomach, but full bodies are rare, and sightings are next to nonexistent. While their average or maximum length cannot be determined from so few examples, we know that they can be around 13 meters long, which is more than a school bus. 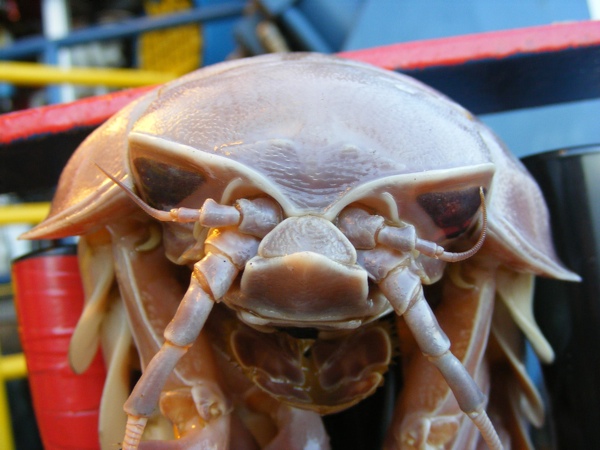 The giant marine isopod (Bathynomus giganteus) looks essentially like a giant wood louse. While those are not exactly scary, they’re certainly not nice to find and the giant marine isopod would definitely freak you out if you saw it walking up to you. The isopod can grow to be about a foot and a half long, and while they spend most of their time on the ocean floor, they are found in almost every ocean in the world, so it’s likely that the giant marine isopod isn’t nearly as far away from you as something this disgusting should be. Although in reality it isn’t that dangerous, that doesn’t make it any less freaky to behold. 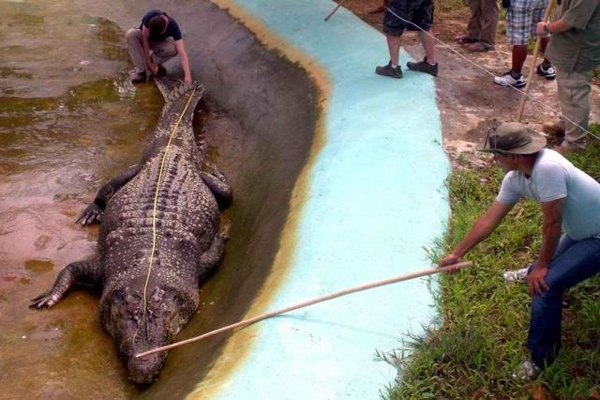 Crocodiles (Crocodylidae) are among the most dangerous looking animals alive today. They can be found in Africa, Asia, the Americas and Australia, and generally grow to about 5 feet, but certain species can grow to be about 15 feet long. But there have been a few recorded births of crocodiles over 20 feet long, such as Lolong, the world’s largest crocodile. Lolong was a 21 foot long crocodile who was captured in the Philippines, making him over twice as long as the average crocodile. He lived 18 months in a zoo, before he got sick and died. He was believed to be about 50 years old. There are many reports about how old a crocodile can be, with guesses including 70 and 100 years. 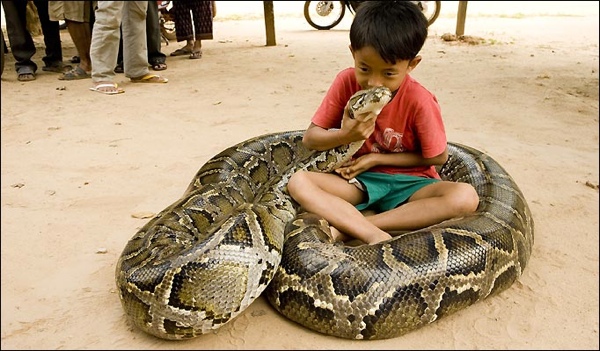 There have been many stories over the years from people who claim to have found a gargantuan snake that puts all others to shame, such as the 49 foot python an Indonesian village alleged to have caught a few years back (when it was officially measured, they were surprised at the fact it had shrunk 28 feet). The longest type of snake is the Burmese python, which can grow to be 23 feet long, with the longest snake in the world being a Burmese python named “Baby”, who measures 27 feet long. Like many other snakes, they kill by constricting their prey. But don’t think that their size will make them easy to spot. They’re excellent swimmers, and can stay underwater for as long as 30 minutes, meaning they could easily sneak up on some unsuspecting paddlers.