It is not common for fish to hunt land animals because sea and land creatures are rarely adapted to survive in the other’s territory. Even at that, land animals are likelier to go into the water to hunt sea animals.

However, it sometimes happens in the reverse, with fish coming on land to hunt land animals. Those that do not come on land have developed specialized tactics to catch land animals. Their targets are usually creatures flying above the water or those unfortunate enough to wander too close to the shore.

European wels catfish in the Tarn River in Albi, France, have evolved to grab pigeons by the riverbank. Researchers are unsure why the catfish do this as it has not been documented among European wels catfish elsewhere. One theory is that the fish have eaten most of their prey and are short of food, forcing them to look outside the water.

But that does not explain why only medium-sized catfish between 1–1.5 meters (3.3–4.9 ft) in length hunt pigeons. It is suspected that the biggest catfish are too large to swim across the shallow water along the riverbank and the smaller catfish are not strong enough to grab the pigeons.

Another theory is that the biggest catfish, which can reach 3 meters (10 ft) in length, have taken to hunting in the depths of the river, forcing the smaller catfish to find other sources of food. The medium-sized catfish have concentrated on catching pigeons. Once the catfish catch the pigeons, they drag the birds into the water where they are consumed.

Through observation, researchers discovered that European wels catfish make successful kills 28 percent of the time. While this seems small, we should remember that lions have a success rate of just 18 percent despite hunting in groups and having prey that are also land animals. So this record is impressive for a fish hunting a land animal.[1] 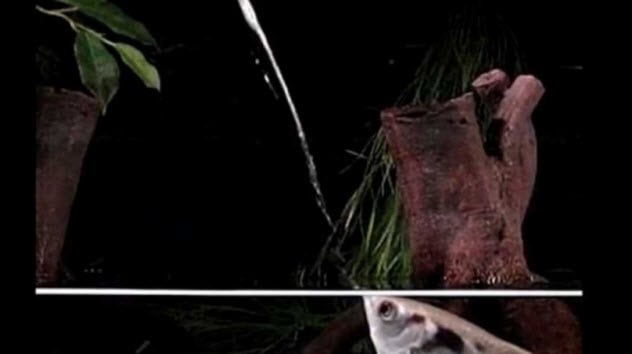 In the unforgiving wild, predators and prey will do anything to survive. For unsuspecting flying prey like insects, some predators will hunt them in flight and others will seek them on land. Tree branches hanging over water should have been a safe abode for these insects, but that is not always true. Sometimes, it is even more dangerous than flying over land or water.

The archer fish is an unexpected predator from below. It has evolved to hunt insects hanging on tree branches above the water. The archer fish does not leap to catch its prey but shoots them with a stream of water instead.

The water does not hit the target in a single stream. Rather, the water at the end of the stream is faster than the liquid in front. So it hits the insect at once, sending the poor creature falling into the water where the fish picks it up.[2] 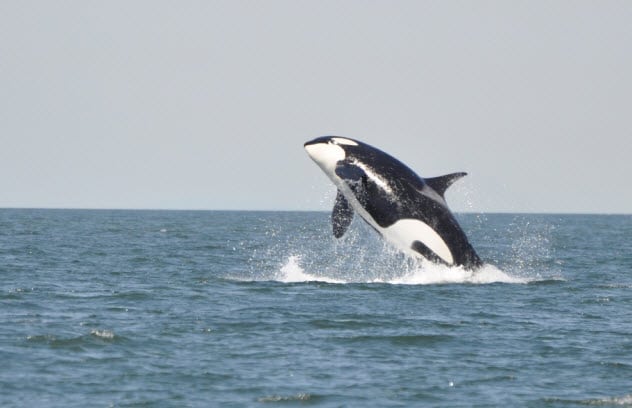 Killer whales (aka orcas) are apex predators that will hunt and eat almost anything they come across. They will readily prey on seals, seabirds, octopuses, turtles, sharks, and even whales.

Even though they live in the water, orcas are not fish. They are mammals in the dolphin family. But we thought their hunting habits made them interesting enough to put on this list anyway.

Orcas do not feed on sea animals alone. They will readily grab birds flying above the water or other land animals wandering along the coastline.

The silver arowana is a ferocious hunter found in the waters of South America. It is capable of leaping out of the water to snatch birds, insects, and snakes from overhanging branches. The action is so fast that the prey is already in the mouth of the fish before the victim realizes what is happening. Silver arowanas grow up to 1 meter (3.3 ft) in length and can leap up to 2 meters (6.6 ft) out of the water.

In South America, they are called water monkeys because of this ability. They show a preference for land animals over fish and have been documented eating spiders, beetles, small birds, and snakes.

Silver arowanas are so adapted to hunting prey above the water that they often develop drop eye when they are kept in aquariums. If they have this condition, one or both of their eyes look down and are unable to look up again.

This is caused by their owners giving them food that sinks to the bottom of the aquarium. It also happens when they are fed live fish, especially ones that swim below the silver arowanas.[4] 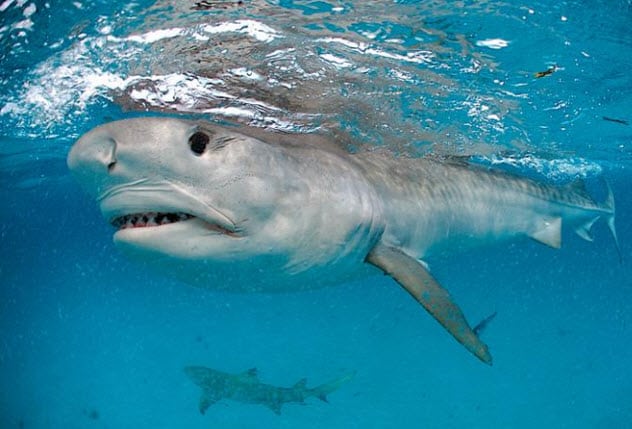 Some birds migrate long distances over the sea to breed. But migration can sometimes be confusing, and birds do lose their way. Unlike us, they cannot stop to ask for directions.

So they just continue flying until they become exhausted and fall from the sky. It appears that tiger sharks in the Gulf of Mexico are fully aware of this and have proceeded to take advantage of the confused birds to fill their stomachs.

We used to think that tiger sharks exclusively fed on marine animals and waterbirds until Marcus Drymon, a researcher with Dauphin Island Sea Lab, proved us wrong in 2009. Drymon had just caught a tiger shark off the coast of Alabama when it coughed up feathers.

The feathers did not belong to a waterbird, which made him curious. This prompted a study that led to the dissection of the stomachs of 50 more tiger sharks.[5]

The stomachs of about 25 of these sharks contained the remains (beaks, feathers, and feet) of terrestrial birds like tanagers, woodpeckers, and meadowlarks. Further investigations revealed that the bright lights from offshore oil rigs were disorienting the migratory birds and making them confused, causing them to fall into the water and end their migrations in the bellies of waiting tiger sharks. 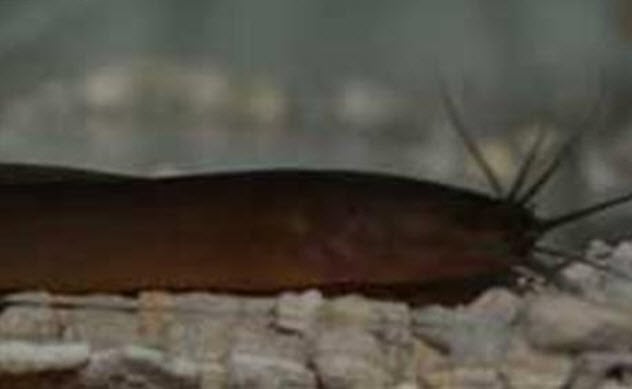 The eel catfish is able to do this thanks to its spine, which has evolved perfectly to allow it to bend to catch the beetle.[6] 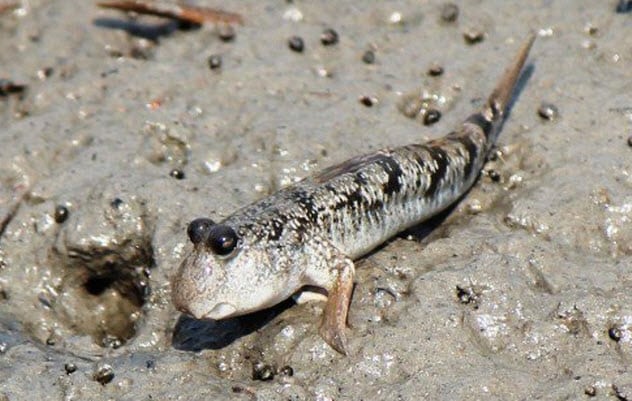 The mudskipper has that name for good and obvious reasons. It leaves the water to walk on mud by skipping through it. They have adapted so well to hunting insects, worms, and smaller mudskippers on land that they see better on land and will drown if they remain in the water for long. Some species can even travel far away from water, although they often require a moist and swampy environment.[7]

Besides feeding, mudskippers do several other fishy things on land. This includes mating and marking territory, for which they will often fight. Mudskippers can switch between land and water because of their unique ability to breathe through their gills like fish underwater and through their skin, mouth, and throat linings on land.

Diving with the Deadly Tigerfish

Unlike the silver arowana that focuses on insects and birds hanging on tree branches above the water, the African tigerfish concentrates exclusively on hunting barn swallows that fly quickly above the water. The tigerfish is able to achieve this feat thanks to its sleek, 1-meter-long (3.3 ft) body and sharp, fang-like teeth. Interestingly, it is the only freshwater fish known to hunt this way.

The tigerfish has different methods of hunting the birds. One tactic is chasing the bird from the surface of the water before leaping above the water to grab it. Another is to hide underwater and leap out the moment the bird flies past.[8]

Despite reports going as far back as 1940 explaining the tigerfish’s unique hunting method, we only confirmed it recently when a research team from North-West University in Potchefstroom, South Africa, observed a tigerfish leaping out of the water to catch a barn swallow in a lake at Mapungubwe National Park in South Africa.

The team was studying the tigerfish’s habitat and migration routes when they saw one leap out of the water to catch a bird. It happened so fast that they did not quickly realize what had occurred. 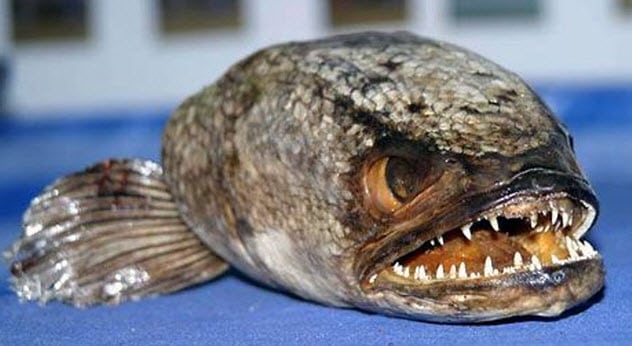 The snakehead fish is also capable of hunting on land. They are native to Asia but mysteriously ended up as an invasive species in American rivers. They used to be legally imported from Asia to America for food and as pets, so it is suspected that someone might have released them into the river. The Potomac River alone has over 21,000 snakeheads.

These fish have been observed leaving the water to hunt on land. In Australia, they have been seen feeding on waterbirds, rodents, and even snakes. The snakehead fish will leave the water and wriggle their way through land to get their prey, which they swallow in one go.[9] 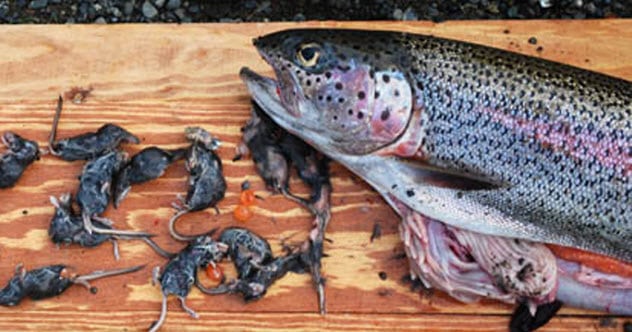 The rainbow trout is a colorful freshwater fish whose body is covered with black spots. It is known for its ability to leap high into the air and its tendency to fight back when caught. This fish has a diverse diet and will readily hunt anything from insects to other small fish and even small land mammals.

Researchers are unsure of how the rainbow trout catch these animals but suspect that the trout grab these creatures from the banks when they wander too close to the rivers. Shrews eat a lot and will often wander around rivers or even enter the water to hunt insects. Although they are bad swimmers, they are known for trying to cross very shallow streams, all of which makes them easy prey for the rainbow trout.[10]