“The sea has never been friendly to man. At most it has been the accomplice of human restlessness.” – Joseph Conrad

For millennia, the open waters have beckoned to us, calling adventurous souls to their liberation—and, in many cases, to their doom. Traces of these explorers, heroes, and merchants can still be found in our oceans; divers among us can explore their sunken vessels, which have been essentially frozen in time.

The United Nations estimates that there are over three million shipwrecks on the ocean floors. Lost, destroyed, or deliberately sunk, these wrecks are of interest to divers, underwater archaeologists, and treasure hunters alike. 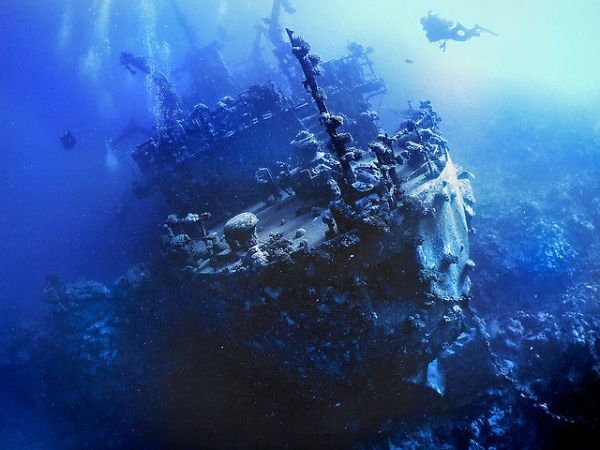 Known only as the “Russian Wreck”, the mysterious sunken ship was discovered in 1988 beneath eighty feet (24m) of water. Some say that this ship was the “Khanka,” a fishing trawler believed to have sunk in the area. But the presence of electronic equipment—including a communications mast, more than two hundred batteries, and directional-finding antennae—suggests that the ship was most likely used for surveillance or communications. The spy-ship rumors have their roots in the fact that the Soviets preferred to use commercial vessels such as fishing trawlers to gather covert intelligence in the 1950s, and many believe they had a surveillance facility nearby in Yemen’s Ras Karm Military Airbase in 1971. 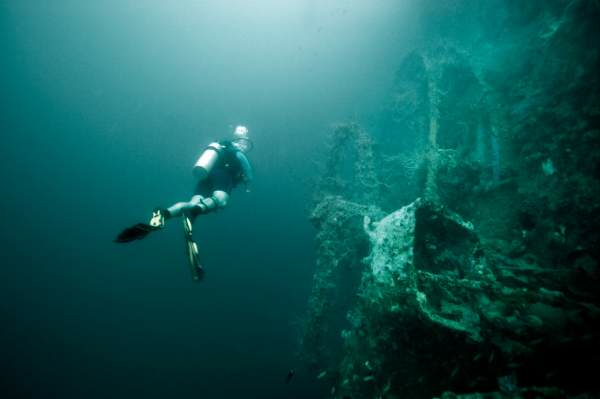 In October 1898, a terrible storm caused the sinking of various ships and the loss of many lives on Lake Michigan. One of these was the Doty, one of the last giant steamships built to carry cargo across the Lakes. She was finally rediscovered on June 16, 2010, after being lost for 115 years.

At that time, she was the largest wooden vessel still missing on Lake Michigan. Found below more than three hundred feet (91m) of water, the wreck was still upright and intact with even the corn cargo still safely in its hold. The Doty is in such an amazing state of preservation due to the extremely cold, fresh water, and the great depth.

8
SS President Coolidge
Off the coast of Vanuatu, South Pacific 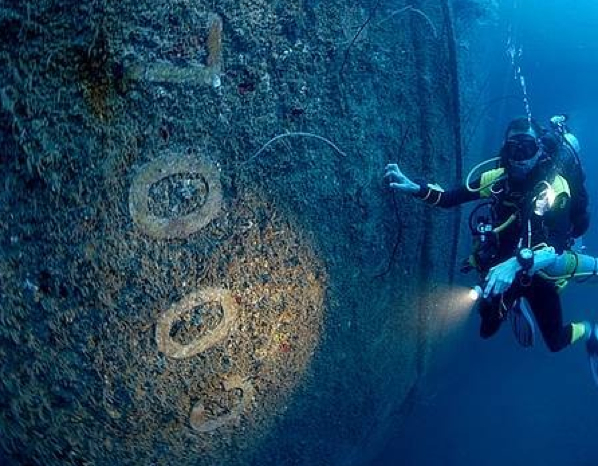 The SS President Coolidge was one of the most extravagant luxury ocean liners ever built—until 1941, that is, when she was converted to carry troops for the war effort. As she attempted to take troops into the harbor at Espiritu Santo on 26 October 1942, she struck two mines. There were only two fatalities, with most of the troops making it safely to the beach.

Today, the Coolidge is the largest and most accessible wreck of its size and type from WWII. In 2007, it was listed as one of the top ten wreck diving sites in the world, for its visibility and easy beach access.

7
The Umbria
The Red Sea 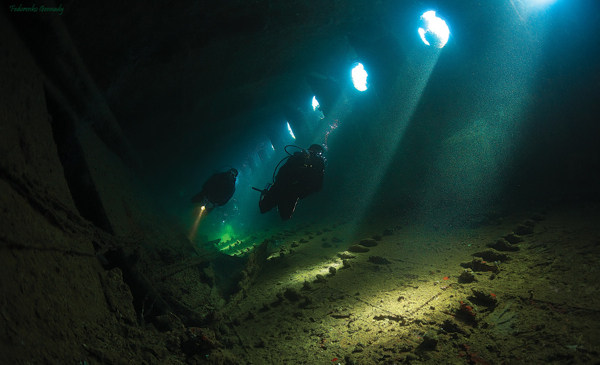 The Umbria has been described by divers as “the best shipwreck in the world.” Still very much intact, only her wooden decking has been lost through the years—making it a great site for divers wishing to explore a preserved piece of history.

Launched in December 1911 as a cruise ship, it was eventually purchased by Italy and used to ferry troops to the East African colonies. When WWII had broken out—but before Italy had formally declared war on the Allies—the ship was searched by British sailors, who noted that it was chock-full of arms and explosives which would inevitably go towards the Axis war effort.

But Italy still had not declared war, so Britain couldn’t do a thing. That night, as the Umbria lay in British custody on the Red Sea, the Italian captain was the first to hear Italy’s war declaration over the radio. Wasting no time, he scuttled the ship—with 360,000 bombs still onboard. The ship and its contents have never been salvaged. 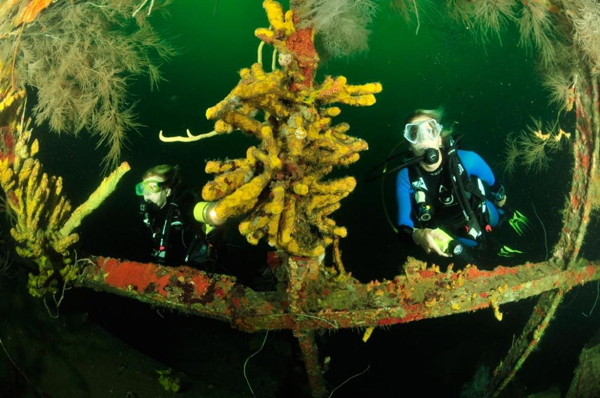 Aptly named the “Titanic of the Caribbean,” the luxury liner Bianca C is the largest wreck (600 ft/180m) to be explored in warm waters. In October 1961, during the early morning hours, an explosion occurred in the engine room while the ship was at port. As the ship started burning, passengers and crew were evacuated.

After burning for two days, the ship was towed away from the mouth of the harbor as it slowly began to sink. To this day, the Bianca C’s anchors are still lying in the mouth of St George’s Harbor. She currently lies beneath about 165 feet (50m) of water. 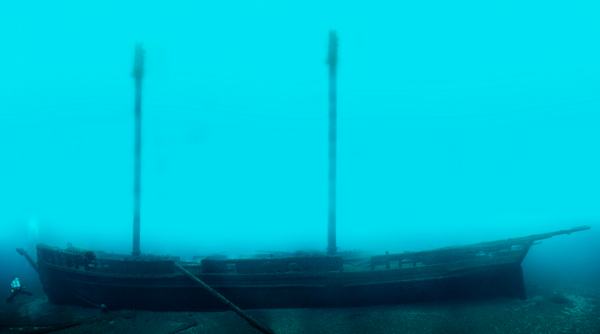 Lake Huron is host to hundreds of sunken vessels, some of them quite historic. The wrecks in these waters are extremely well preserved due to the cold, fresh water conditions. In October 1854, the Defiance was southbound on Lake Huron with a hull full of grain.

Around 1:30 a.m., in misty conditions, she somehow struck the mid-section of another ship, the John J Audubon, gashing open the hull and ultimately causing its demise. The Defiance followed the Audubon to its watery grave within fifteen minutes. Remarkably, its wreck seems to be completely intact. 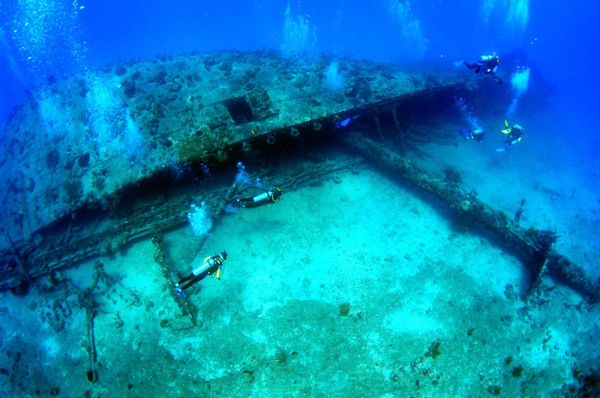 The RMS Rhone was wrecked in October 1867 during the San Narciso Hurricane, the last of the Atlantic Hurricane season. Trapped in the Great Harbor of Salt Island by the storm, the captain tried to make his escape via the channel as soon as the winds began to calm.

Before he reached safety, however, the winds shifted again—throwing the Rhone directly onto the rocks. The impact broke the vessel in two, and the cold waters caused the boilers to explode. As was common practice at the time, the passengers had been tied to their beds during bad weather to keep them safe from harm, and because of this, only twenty-three crew members survived. Lying between thirty to eighty feet of water, it has become a very popular dive site. 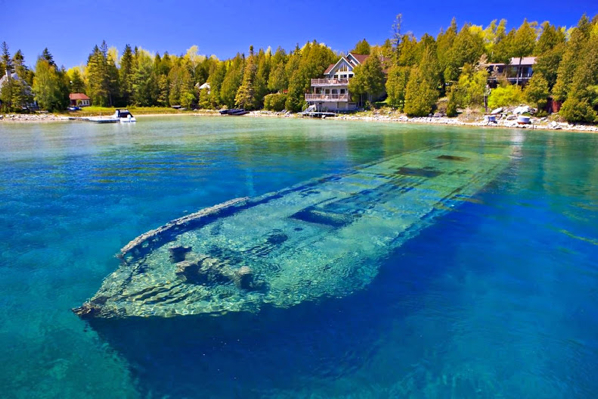 The highly visible wreck of the Sweepstakes is one of the best-preserved nineteenth century schooners ever located, and one of the most picturesque shipwrecks in the world. Lying at a maximum depth of twenty feet (7m), it is a favorite location for divers, tour boat operators, and snorkelers in the Fathom Five National Marine Park.

Built in 1867, the 119 foot (36.3m) schooner was mainly used to transport coal for eighteen years until she sank in Big Tub Harbor after being damaged. Due to deterioration caused by divers’ oxygen bubbles, the wreck can no longer be entered; a fence has been put up to help preserve the wreck for future generations.

2
The Ghost Ship
The Baltic Sea 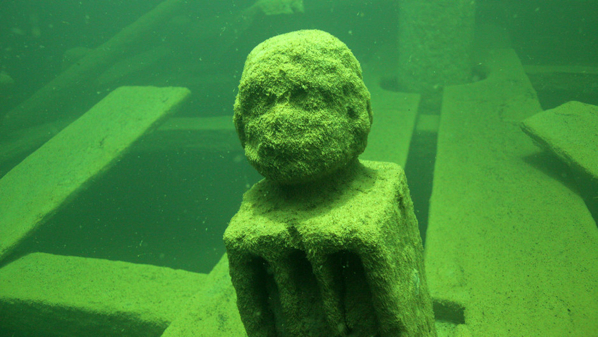 The Ghost Ship was accidentally discovered in 2003 by a crew searching for a Swedish plane shot down in WWII on the Baltic Sea. A full-scale archaeological expedition was launched in 2010, and soon the researchers were able to confirm that the ship was built around 1650. It is believed to be a type of Dutch ship known as a fluyt (a sailing cargo ship). As the waters of the Baltic Sea have almost no tidal movement and the salinity is only 0.06-0.15%, shipworms are not able to inhabit it. That’s why the Baltic houses some of the most ancient and well-preserved vessels in the world.

The most exquisite shipwreck ever to be found in the Baltic Sea was the Swedish royal warship, the Vasa. Built to glorify king Gustavus Adolphus, no expenses were spared in its decorations and equipment. Built between 1626 and 1628, it rather unfortunately sank on its maiden voyage, less than one nautical mile from the harbor.

When it was located again in the 1950s, the Swedish government decided to salvage the wreck. During a recovery operation in 1961, thousands of artifacts and human remains were removed from in and around the hull. The wreck was so well-preserved (after almost 350 years under water), that the smallest details could still be discerned on its artwork. It took more than eighteen months, 1,300 dives, and eighteen separate lifts to salvage the Vasa. But the effort paid off: today, the Vasa museum is one of the most popular tourist attractions in Sweden.

+1
The Titanic
The North Atlantic Ocean 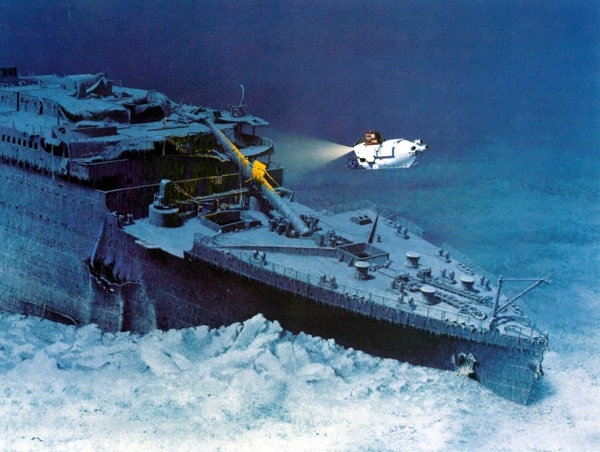 As the most famous shipwreck of all time, I had no choice but to add the Titanic to the list. Featured in various other lists on Listverse, which can be read here and here, the ill-fated ocean liner was discovered in 1985, close to Newfoundland. Lying at a depth of 12,460 feet (3.6km) the wreck is a tomb for many of the men, women, and children who lost their lives when the ship sank.

Though it was at first believed to have sunk in one piece, the expedition team that discovered its resting place were amazed to find that the ship had in fact broken into two pieces. According to some estimates, the Titanic’s hull and structure will collapse within the next fifty years—leaving only rusted rubble on the ocean floor.

Hestie is a graphic designer, author and entrepreneur living in Pretoria, South Africa. She has a semi-unhealthy obsession with vampires, serial killers, history and of course, Listverse.