Space exploration is a grand adventure. Its mystery has always captivated us and the inevitable discoveries to come will add to the many cosmological insights we already have. But let this list serve as a warning for any weary inter-solar travelers. The universe can be a very frightening place. I hope no one should ever find themselves stuck in one of these ten worlds. 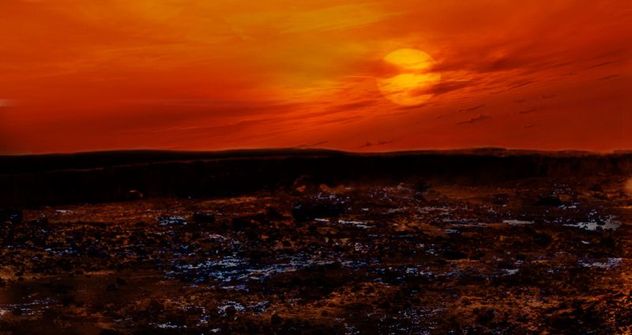 Our planet maintains a high ratio of oxygen to carbon. Carbon actually makes up only about 0.1 percent of earth’s bulk (hence the scarcity of carbon based materials like fossil fuels and diamonds). Near the center of our galaxy however, where carbon is more plentiful than oxygen, planet formation is very different. It is here that you find what cosmologists call carbon planets. The morning sky on a carbon world would be anything but crystal clear and blue. Picture a yellow haze with black clouds of soot. As you descend farther down into the atmosphere you find seas made of compounds like crude oil and tar. The surface of the planet bubbles with foul smelling methane pits and black ooze. The weather forecast doesn’t look good either: it’s raining gasoline and asphalt (…no smoking). But there would be an upside to this “oil-well hell.” You may have guessed it. Where carbon is plentiful you also find high quantities of diamond.

On Neptune, one can find constant jet stream winds that whip around the planet at terrifying speeds. Neptune’s jet-stream winds push frozen clouds of natural gas past the north edge of the planet’s Great Dark Spot, an Earth-size hurricane, at a staggering 1,500 miles per hour. That is more than double the speed needed to break the sound barrier. Such wind forces are clearly beyond what a human could withstand. A person who happened to find himself on Neptune would be most likely be ripped apart and lost forever in these violent and perpetual wind currents. It remains a mystery as to how it gets the energy to drive the fastest planetary winds seen in the solar system, despite it being so far from the sun, at times farther from the sun than Pluto, and having relatively weak internal heat. 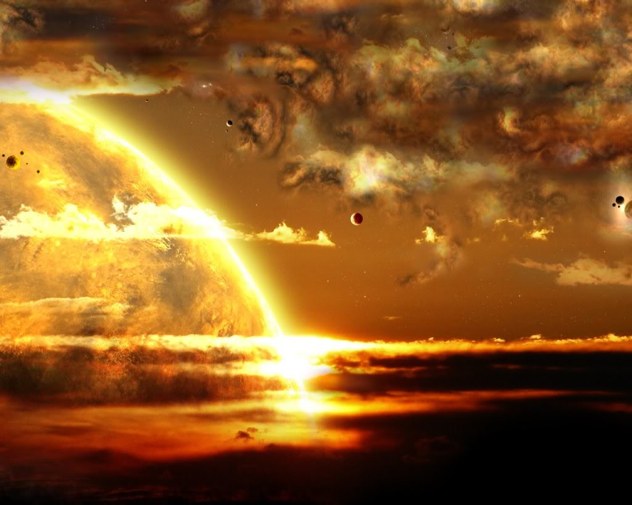 Nick-named Bellerophon, in honor of the Greek hero who tamed the winged horse Pegasus, this gas giant is over 150 times as massive as earth and made mostly of hydrogen and helium. The problem is that Bellerophon roasts in the light of its star at over 1800 degrees F (1000 degrees C). Bellerophon’s star is over 100 times closer to it than the Sun is to Earth. For one thing, this heat creates an extremely windy atmosphere. As the hot air rises, cool air rushes down to replace it creating 1000 km per hour winds. The heat also ensures that no water vapor exists. However, that does not mean there is no rain. This leads us to Bellerophon’s main quirk. Such intense heat enables the iron composing the planet to be vaporized. As the vapor rises it forms iron vapor clouds, similar in concept to water vapor clouds here on Earth. The difference though, is that these clouds will then proceed to rain a relentless fury of molten iron down upon the planet (…don’t forget your umbrella). 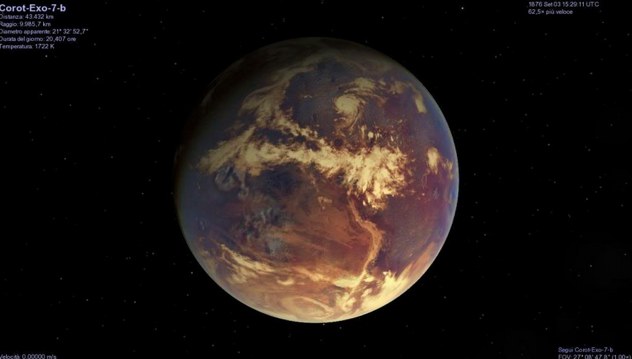 The densest and most massive exoplanet to date is a world known as COROT-exo-3b. It is about the size of Jupiter, but 20 times that planet’s mass. This makes COROT-exo-3b about twice as dense as lead. The degree of pressure put upon a human walking the surface of such a planet would be insurmountable. With a mass 20 times that of Jupiter, a human would weigh almost 50 times what they weigh on Earth. That means that a 180 pound man on Earth would weigh 9000 pounds! That amount of stress would crush a human beings skeletal system almost instantly. It would be the equivalent of an elephant sitting on your chest. 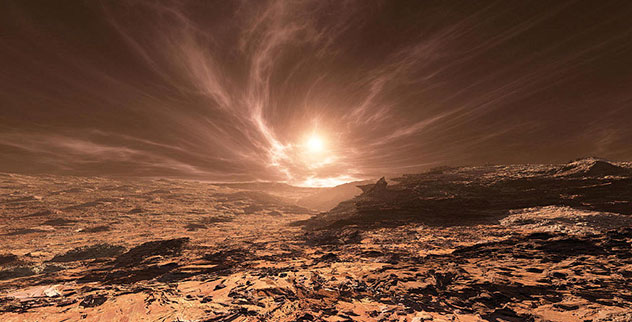 On Mars a dust storm can develop in a matter of hours and envelope the entire planet within a few days. They are the largest and most violent dust storms in our solar system. The Martian dust vortices tower over their earthly counterparts reaching the height of Mount Everest with winds in excess of 300 kilometers per hour. After developing, it can take months for a dust storm on Mars to completely expend itself. [Text redacted: see endnote.] Hellas Basin is the deepest impact crater in the Solar System. The temperatures at the bottom of the crater can be 10 degrees warmer than on the surface and the crater is deeply filled with dust. The difference in temperature fuels wind action that picks up the dust, then the storm emerges from the basin. 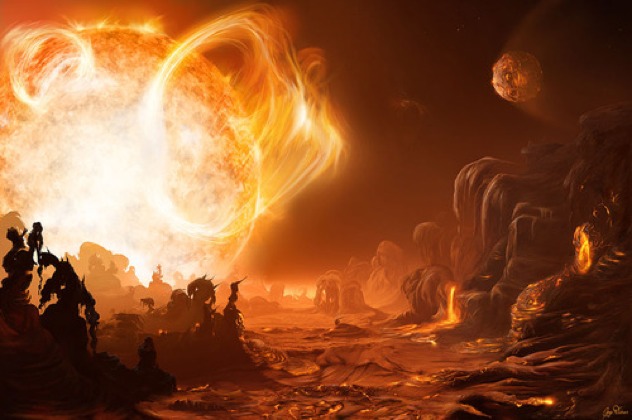 Simply put, this planet is the hottest planet ever discovered. It measures in at about 4,000 degrees F (2,200 degrees C) and orbits its star closer than any other known world. It goes without saying that anything known to man, including man himself, would instantly incinerate in such an atmosphere. To put it in perspective, the planets’ surface is about half the temperature of the surface of our sun and twice as hot as lava. It also orbits its star at a blistering pace. It completes a full orbit once every Earth day at a distance of only about 2 million miles (3.4 million km). 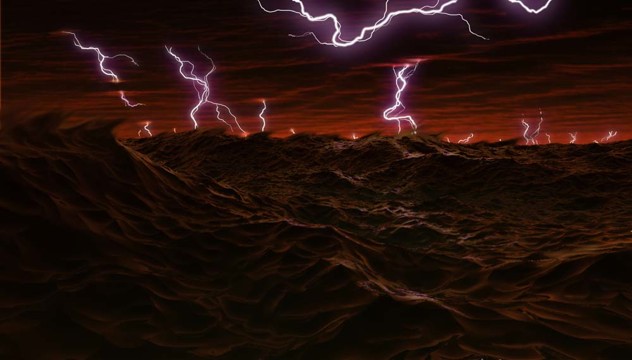 Jupiter’s atmosphere brews storms twice as wide as the Earth itself. These goliaths generate 400 mph winds and titanic lightning bolts 100 times brighter than ones on Earth. Lurking underneath this frightening and dark atmosphere is a 25,000 mile deep ocean of liquid metallic hydrogen. Here on Earth, hydrogen is a colorless, transparent gas, but in the core of Jupiter, hydrogen transforms into something never seen on our planet. In Jupiter’s outer layers, hydrogen is a gas just like on Earth. But as you go deeper, the atmospheric pressure sky-rockets. Eventually the pressure becomes so great that it actually squeezes the electrons out of the hydrogen atoms. Under such extreme conditions, the hydrogen transforms into a liquid metal, conducting electricity as well as heat. Also, like a mirror, it reflects light. So if you were immersed in it, and caught under one of those ferocious lightning bolts, you wouldn’t be able to see anything. 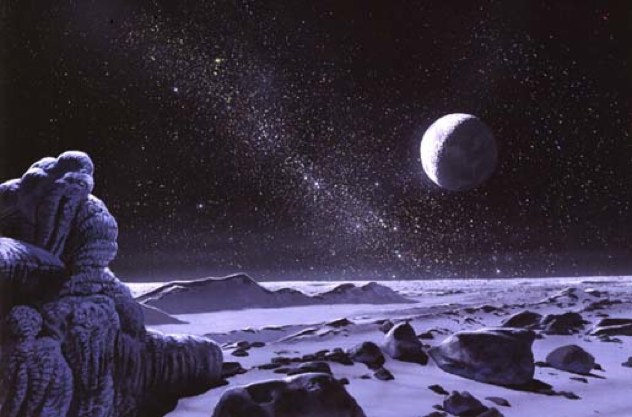 (Note: Pluto is technically no longer classified as a planet). Do not let the picture fool you; this is not a winter wonderland. Pluto is an extremely cold world where frozen nitrogen, carbon monoxide, and methane blanket the surface like snow during most of its 248 year plutonian year. These ices have been transformed from white to a pinkish-brown due to interactions with gamma rays from deep space and the distant Sun. On a clear day the sun provides about as much heat and light as a full moon does back on earth. With Pluto’s surface temperature of -378 to -396 F (-228 to -238 C) your body would freeze solid instantly. 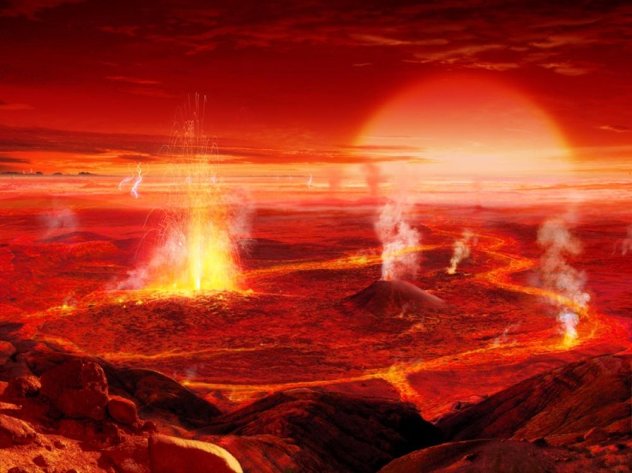 The temperatures on the star-facing side of this planet are so hot that they can vaporize rock. Scientists who modeled the atmosphere of CoRoT-7b determined that the planet likely has no volatile gases (carbon dioxide, water vapor, nitrogen), and is instead likely made up of what could be called vaporized rock. The atmosphere of CoRoT-7b could have weather systems that unlike the watery weather on Earth cause pebbles to condense out of the air and rain rocks onto the molten lava surface of the planet. And if the planet doesn’t already sound inhospitable to life, it also could be a volcanic nightmare. [Text redacted: see endnote.] 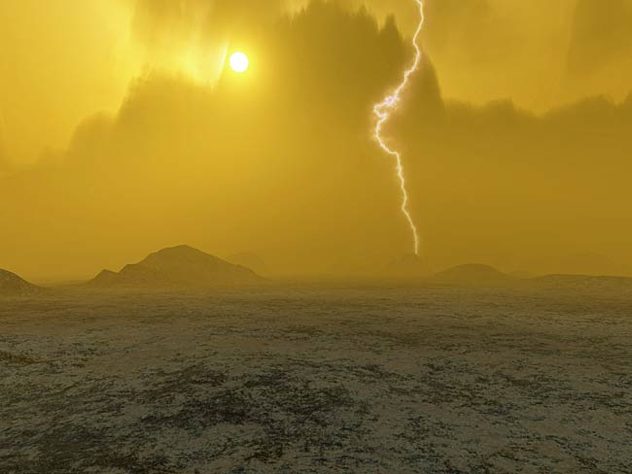 [Entry redacted. The original text of this entry can be found on this list.]

Note: Portions of this list have been redacted because they were found to be plagiarized.

Ross is a law student and long time Listverse reader.