Reptile attack: Nothing strikes fear into the human mind faster than the clash between prehistoric crocodiles or venomous snakes and modern man. However, we are not talking about these well-known dangers. In this shocking list, we look at the horrific Monster Lizards and Terror Turtles on Earth. Some are capable of killing, others, dismembering, or simply chewing your hand apart. The sight of a hard shell or thin tail signals danger beyond your expectations… 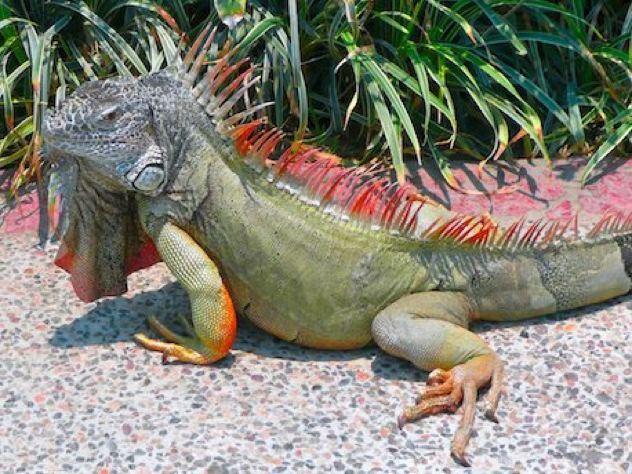 The Iguana has become a fairly popular pet in recent years, and advocates would say having this giant, prehistoric looking reptile around is like an alternative to a dog. Although herbivorous, the Iguana can be unpredictable, and possesses razor sharp teeth. On several occasions, savage injuries have resulted when “tame” but powerful Iguana have become agitated and latched on their owners face or slashed hands with teeth and claws. Iguana may weigh up to 18 pounds and reach over 6 feet in length, making an attack by this giant lizard nothing to joke about. Emergency room visits could very well follow your visit to Jurassic park. 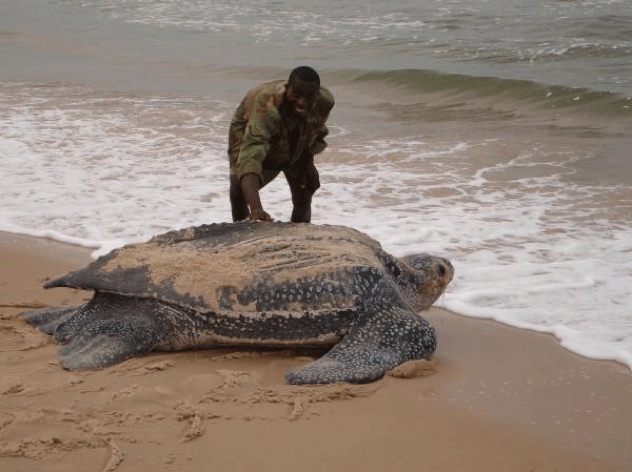 The Leatherback Sea Turtle is the largest of all turtles, occasionally reaching over 8 feet in length. These 2,000 pound omnivores are possibly the widest ranging vertebrate animal on Earth, but are becoming rare and endangered due to development, pollution and bycatch. The turtles are usually fairly gentle giants, but can deliver a bone shattering bite if disturbed, and are extremely strong and powerful. In one bizarre case, a huge leatherback, likely weighing over 1500 pounds turned its aggression toward a small boat and charged it. The turtle had just been chased by a shark, so the boat was considered a threat. 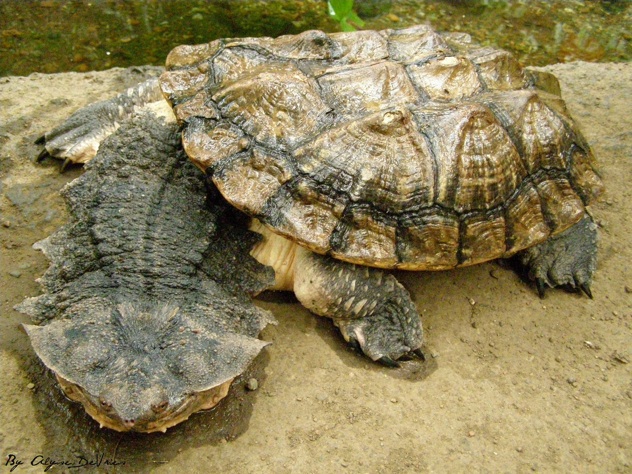 South America’s Amazon is famous for its incredible and sometimes disturbing creatures. Sharing the rivers with Piranha and River Dolphin is the unearthly Mata-Mata Turtle. The fate of a human who stepped on a Mata-Mata has not been well tested, but the bizarre river reptiles have an elongated, snake-like neck with a strange mouth filled with two sharp plates that resemble human fused teeth. Prey items of these extraordinarily creepy exclusive carnivores include waterbirds, fish, and other reptiles. We could only imagine the effect on a boater who reaches towards the bump in the water… 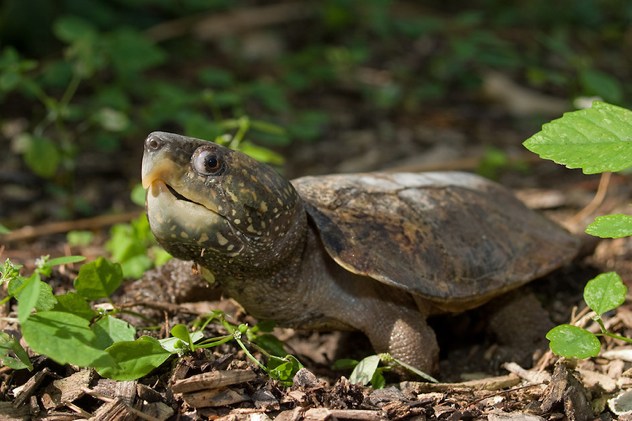 The Big-headed Turtle is a bizarre chelonian species with a long, snakelike tail nearly the length of its body. This turtle is native to Southeast Asia, where it hunts for a variety of prey items in the rivers. The large head cannot be retracted into its shell, and carries immensely powerful jaws. The turtle will not hesitate to use its bone shattering beak if a threat is perceived, so it is best to keep your distance. The Asian Soft-shelled is, incredibly, capable of climbing trees, where it may perch, birdlike. Sadly, this awesome creature is at risk due to poaching, which must be combatted with increased diligence. 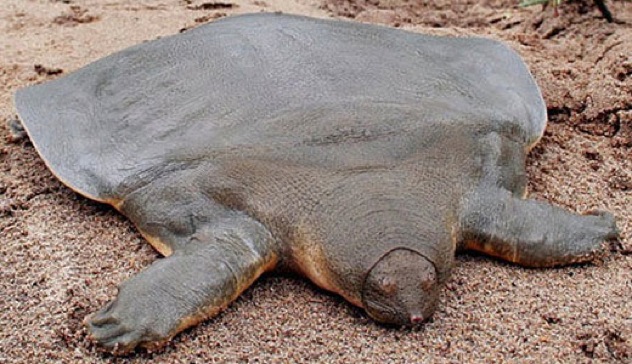 Looking like flattened, human/reptile hybrid out of an alien horror film, Soft-Shells make up for their shell shortcomings with a very hard bite. Among the many species of Soft-Shelled Turtles worldwide, the Cantor’s Giant Softshell, native to China is the most terrifying. It hides in the sand, waiting for prey, before striking out with sharp teeth. The sheer size and power of the bite could lead to horrendous injuries. However, this species is unfortunately now endangered, but more abundant species of soft shell such as the Florida Soft Shell occur in numbers worldwide and may chomp unwary fisherman. 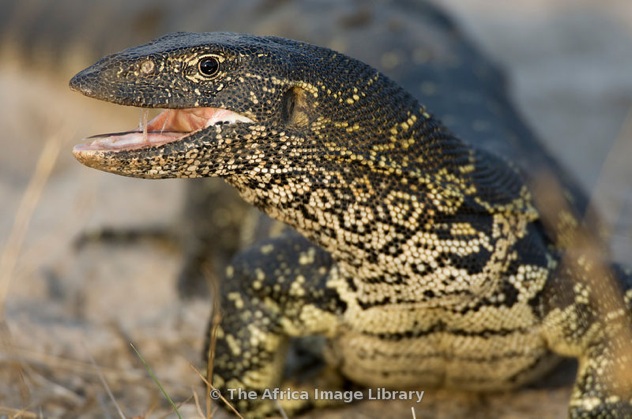 The Nile Monitor shares the Nile and other African rivers with crocodiles, growing up to 9 feet in length. This terrifying lizard often preys upon the young crocodiles as an addition to its mammal and bird diet, and possesses an extremely powerful, infectious bite. When threatened by humans or other potential intruders, a Nile Monitor can seize with a viselike, bone shattering grip, which it is reluctant to release. The giant reptiles are sold as family pets, but owners should be cautious with reports of serious injuries and the fact that these lizards can “snap a cat’s neck in an instant and then swallow it whole”. Children should remain well out of reach of these lizards, as an attack is a possibility with such predators. 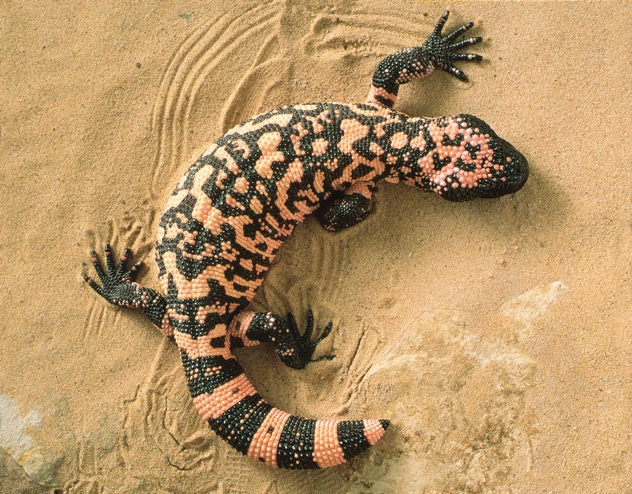 The Gila Monster is North America’s largest lizard at over 2 foot long, and is the only one that is venomous. Gilas are endangered and protected by law, but humans who interfere may become endangered themselves. If disturbed, a Gila Monster may latch on to the offender’s legs or arms, where it sinks its teeth in, quickly releasing a dose of extremely potent, neurotoxic venom. A number of deaths took place before greater awareness of the dangers and treatment options became known. Lacking fangs, the Gila will hold on with great force to a human hand, slowly chewing up the flesh, leaving a mangled, venom soaked mess. Submerging the monster in water may force it to let go, stopping the carnage.

The Malayan Water Monitor is the second heaviest lizard in the world, and lurks in the rivers and deep swamps of Southeast Asia. The lizard has backwards curving teeth, and is known to feed on…dead bodies. If a living human fell into the water where several Water Monitor were feeding, it is very possible that the reptile’s hunting instinct would be activated by the vulnerability of the human, provoking an attack. Water Monitors are capable of feeding on a wide range of animals, and have little trouble with large prey, weighing over 150 pounds in some cases. Length may reach…9.5 feet. 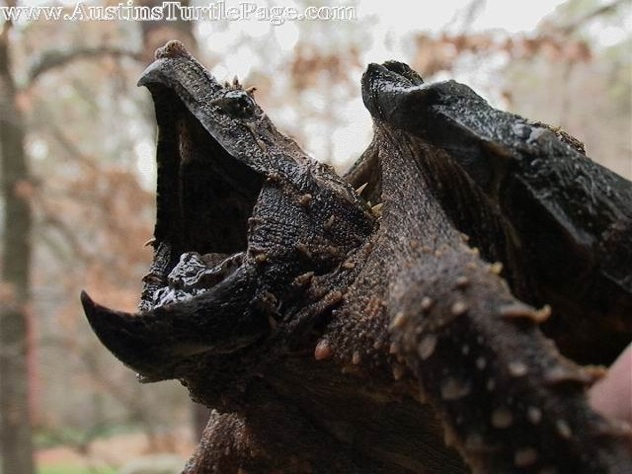 The Alligator Snapping Turtle is the world’s largest freshwater turtle, and by far the most dangerous. Weighing over 200 pounds, the bizarre looking reptile has a cone covered, dinosaur like shell, and a massive beak that will cleanly amputate any body part brought near it, and is capable of severing a broom handle with lightning speed. A swimmer accidentally treading nearby could easily lose part of a foot. Although deaths have not been confirmed, drowning may have occurred undetected. A hypothetical report of a 400 pound snapper is supported by the continued growth of this species throughout its lifespan, which may reach 200 years.

The Komodo Dragon stalks the forested lowlands, beaches and plateaus of Indonesia, posing a threat to nearly every living thing as a prehistoric apex predator. The 10 foot, 300 pound beasts are the largest lizards on Earth, forming microcosm of a prehistoric world where reptiles ruled. Komodos feed on prey as large as water buffalo, and have attacked, disremembered and consumed humans. Such large prey items are charged and knocked down, followed by a vicious attack involving large amounts of flesh being removed. The toxic saliva and bacteria will weaken an animal that does not die right away. Scientists have theorized the Komodo evolved to feed on now extinct dwarf island elephants.

Ron Harlan is a wildlife enthusiast and fan of incredible, dangerous or animals. He does freelance writing covering fascinating and scary wildlife, conservation and oddities.