Near the end of the movie “Skyfall”, there’s a scene in which James Bond and M drive out of the city in a classic 1960 Aston Martin DB5, the distinctive silver Bond Car first used in Goldfinger in 1965. Later—and this is a slight spoiler—the car is shot full of holes with assault rifles and blown up with a helicopter.

If you’ve seen any movie in the past dozen years, you’ll know that this particular scene probably wasn’t hard for the filmmakers to film. All they needed to do was to digitally insert an explosion—or with that kind of budget, perhaps take one of the three hundred or so remaining DB5’s and blow up the real thing.

Instead, the filmmakers printed detailed 1:3 scale models of the Aston Martin on 3D printers, and blew them to absolute bits, saving the real cars for the museums. Remember Iron Man’s suit? Same process.

Here are ten ways people are using 3D printers for something functional—and sometimes changing the world in the process. 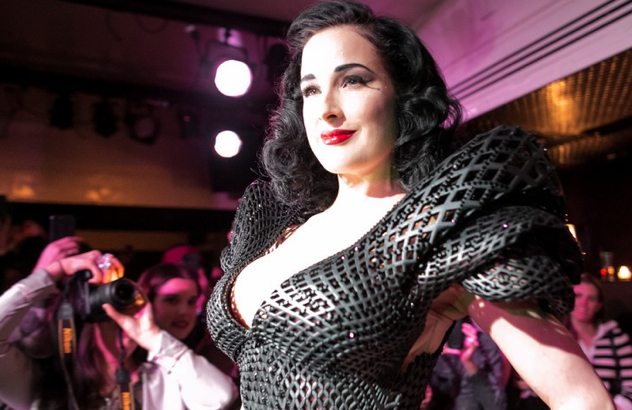 In the early days of 3D printing, the object you got from the printer was usually some sort of bulky plastic thing—a design prototype, for example, used as a visual guide before building the actual product. Now that the technology is more accurate, we can print smaller, more intricately detailed objects. The 3D printing team at Shapeways ran with that idea and gave us printed nylon clothing, which is printed to the exact body dimensions of the person ordering it—the most personalized clothing in the world.

Their first 3D printed clothing line is called the N12 Bikini (N12 stands for Nylon 12, the material it’s made of). The bikini is formed with an equation called circle packing; in other words, it’s made entirely with small connected circles that an algorithm adjusts based on the curvature of the shape—the larger the curve, the smaller the circles. The entire design is based on a body scan so that the final product perfectly fits the wearer. 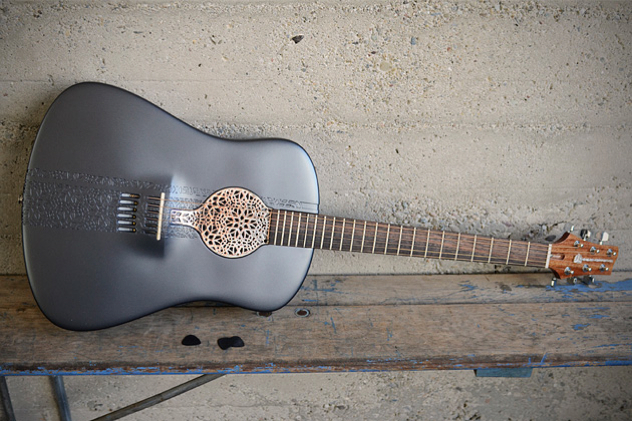 Since about the twelfth century, guitars—or at least their predecessors—have been made out of wood. More recently, plastic has also been used, but the construction process is the same in either case. It’s subtractive, meaning that something is taken away to get the right shape. You start with a big block of wood, and after carving it, you end up with a part for the guitar. And indeed, manufacturing in general is usually carried out in this way.

3D printing, on the other hand, is additive—it’s built up layer by layer into the right shape with material that later turns into a solid (like a puddle of glue from a hot glue gun).

With that process, you can make almost anything—even the near-perfect acoustic shape of a guitar. This guitar is a great example; it was printed by Scott Summi, and is the first of its kind. Every part of it was printed except the neck and the strings (even the metal parts were printed), and it took about two hours to complete. And since any 3D printed object comes from a computer model, there’s no limit to the different ways a guitar could be designed—opening the door for immense creativity. Last year, Behrokh Khoshnevis—an engineering professor at the University of Southern California—gave a TED talk in which he described how a full-sized house (25,000 sq. feet, or 2,320 sq. meters) can be 3D printed in less than twenty hours, plumbing and electrical wiring included. That time frame is almost unbelievable. Entire neighborhoods could be built in a month, and all you need to do is change the computer’s design blueprint for a house that looks completely different—no more homogenous suburbs.

More importantly, this system could be used to replace slum areas or provide quick housing for victims of natural disasters. To put that in perspective, if this technology was in use when Haiti was struck by an earthquake in 2010, almost everybody who was rendered homeless would already have another home.

Photography is probably the last place you’d expect 3D printing to show up. A high quality camera can cost several thousand dollars, and the lenses that come with it are just as pricey. And there’s a reason for that: photography at its core is a capturing of light, and for the best result you need the best equipment. Lenses are especially important because they’re responsible for refracting the light at the right angle to create a focal point, resulting in a crystal clear image.

Although 3D printed camera lenses aren’t anywhere near the quality of traditionally-made lenses, they’re progressing with leaps and bounds. This is partly due to sites like Thingiverse, where users can upload their design blueprint—allowing others to download it for free and improve upon it. This camera lens is made from acrylic on a home printer, and it takes decent pictures. Pricier 3D printers are already capable of printing glass objects, so it actually shouldn’t be long before it’s possible to make a glass lens in your home that rivals commercial lenses—all for a fraction of the cost. 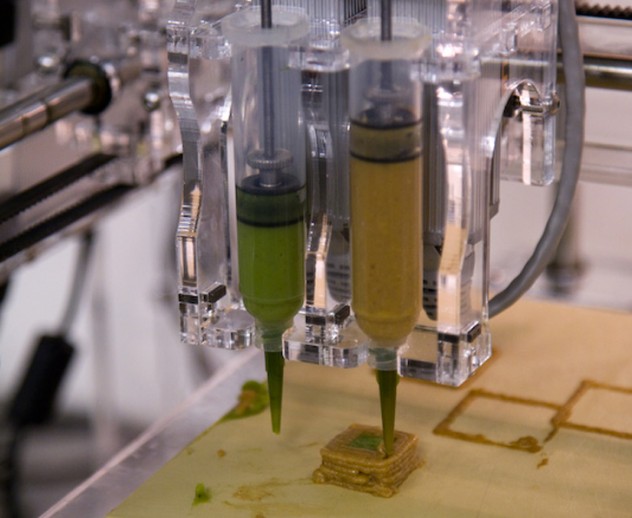 NASA has been using 3D printers to print parts for their spacecraft for the past few years—a fact which is cool enough on its own. But these days, NASA is taking that concept in a completely new direction; they’re currently in Phase One of a three-phase plan to develop a method for printing food on long space voyages.

The space program isn’t pioneering that technology, though—that’s the job of Andras Forgacs, CEO of Modern Meadows, who became the first person to eat a piece of printed meat earlier this year. The process of printing food is essentially the same as anything else: you just substitute the plastic for living cells, and build that into muscle tissue, layer by layer.

With that simple substitution, you also single-handedly remove the thousands of environmental problems that stem from modern agriculture. People are pretty spectacular. There are those who set out to save the world, and there are those who inspire the world. Art has played its own part in advancing the human intellect throughout centuries, and 3D printing is offering yet another medium for artists to express themselves—and some of the results are absolutely mind-blowing.

The sculpture pictured above was made by Sophie Kahn, a photographer and sculptor who was initially attracted to 3D printing as a “post-photographic process”—a way to get yet another layer of creativity out of a photo. Sophie Kahn is making a splash in the art world, but there are already hundreds of other people who have turned to 3D printing as a creative outlet. It doesn’t hurt that, for a struggling artist, the materials are much cheaper than traditional art supplies.

In 2011, Richard Van As lost four of his fingers in a carpentry accident. Faced with a hefty sum of around $10,000 for a mechanical prosthetic, Richard decided to build his own instead. And he did this at home—with a 3D printer.

His prototype, called the Robohand, has five fingers that close when he bends his wrist. After he built the hand, he uploaded the blueprint to the internet so that anybody could do the same thing. But then he went a step further: Richard and his partner are now building prosthetic hands for South African children with missing fingers, like this five-year-old boy who was born with amniotic band syndrome, a disorder that caused him to be born fingerless.

The exciting thing is that Richard’s work is only the tip of the iceberg. In 2009, a man named Eric Moger had a tumor removed from his face, leaving a hole the size of a tennis ball in his left cheek. Doctors printed a prosthetic that mirrors the right side of Eric’s face. The prosthetic has the flexibility of normal skin and looks almost startlingly realistic. And earlier this year, a man in the United States had a prosthetic implanted in his skull which covered nearly a quarter of the skull’s entire surface.

We aren’t going to re-grow lost arms and legs with lizard-like efficiency anytime soon, but we’re heading in that direction. For example, engineers at Cornell University printed a working ear using cells pulled from a patient’s rib. The cells were mixed into a gel material that the 3D printer could use to build a model—and after three months, the ear actually began growing its own cartilage.

Once again, it gets better. A few months ago, we briefly mentioned 3D printers in a list, and prophesied that sometime in the future we might be able to print human organs. Well, that actually happened about a month after the list was published. San Diego research company Organovo announced in April that they had successfully printed human liver tissue capable of performing all the functions required of a liver. They don’t have a full liver yet, but the horizon is getting closer. This is definitely the first step towards printing replacement organs on demand—potentially saving many thousands of lives every year.

We seem to have an almost religious fascination with the idea of breathing a semblance of life into another creature. But perhaps that’s because robots are awesome.

In any case, there are already quite a few research groups who have begun prototyping robots with 3D printers. In Germany, Fraunhofer-Gesellschaft has developed an eight-legged spider robot, printed so easily that one researcher compared it to a “disposable rubber glove”—in the sense that after you’ve used it once, it’s easier just to print a new one.

A joint project from MIT and Harvard has also developed a 3D printed robot—which, incredibly, can assemble itself. The bot is made with “shape memory polymers,” which allow it to fold itself into the appropriate shape once it’s been printed.

Finally, there’s this robot, a voice-activated android that will respond to verbal commands in an appropriately creepy fashion. The plans are available for free online, so anybody can build one and play their part in constructing a robot army. 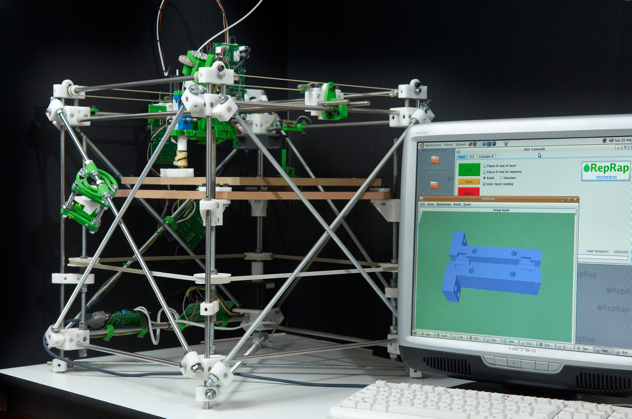 Typically, someone has already designed a 3D printer that can print other 3D printers. Called RepRap, the printer uses open-source design plans, and all its pieces can be printed out via another printer (except a few of the metal nuts and bolts). In 2008, the machine was tested at the University of Bath in the U.K., where it successfully made a “child” copy of itself. Just over three minutes later, that child had finished printing the first part for the next child down the robo-geneological line.

Since all of the plans for the printer are freely available online, a community of sorts has formed around it, evolving the design to make it more efficient. For example, one person can download all the blueprints, tweak them, and then upload the modified blueprints. It’s probably the first true example of hardware crowd-sourcing in history, and there’s no telling where it will go in the future.