This list is a cliff-hanger, literally. We’re talking about Earth’s most dangerous, terrifying, and bizarre natural areas that humans have somehow conquered as wilderness sport zones, making Pandora & Mordor look tame. From a molten Guatemalan footpath to the Irish bicycle route where a mere sneeze could send you into a deadly free fall, here are nine of the most pants-soakingly scary extreme activities. 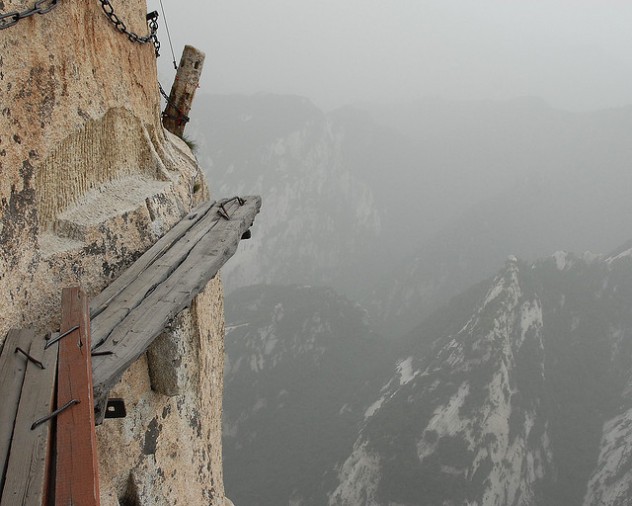 Appearing like a scene from ancient ink artwork, Mount Huashan rises nearly 2,100 meters (6,800 ft) into the clouds in China’s Shaanxi province. Featuring impossible sheer drops and crags in the cedar-studded limestone, climbing the mountain would be nearly impossible, except for a terrifying “trail system” constructed in the early 1800s. Appearing like a scene from a nightmare, a rickety system of boards 0.6 meters (2 ft) wide circle the mountain (sometimes sloping downward), allowing climbers to cling to life as they hold onto chains perilously bolted into the soft cretaceous sedimentary rock. Hikers can admire a drop of 915 meters (3,000 ft) in places. The number of deaths that occur here have not been totaled, but there have been enough to give this unearthly place the title “Mountain of Death”. 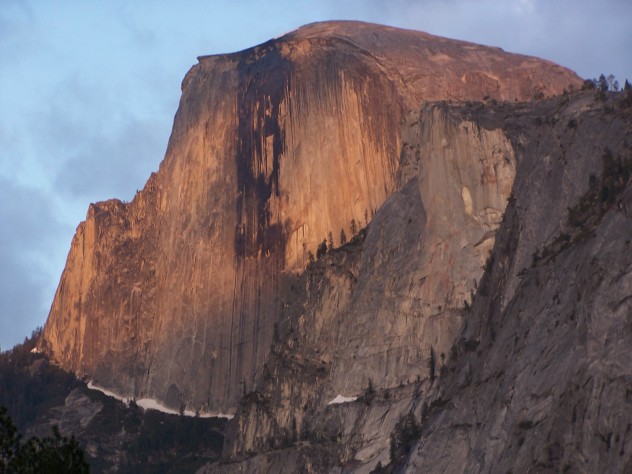 A cliff without mercy, the Prophet can predict your fate with 100 percent accuracy if you try to climb it without world class skills and equipment. Nearly perfectly smooth, the composite rock cliff extends in a sheer line more than 550 meters (1,800 ft) into the sky from the rocky canyons below. Climbers ascend the terrifyingly smooth cliff by wedging a climbing clamp inside cracks, and then climbing a few feet before holding on tightly and reconnecting it. The rock is so hard, normal pitons cannot be used. Some even more extreme climbers ascend partway up without the benefit of a rope, giving death a good opportunity. The greatest risk of the rope method is slippage of the clamps due to human error in securing them. 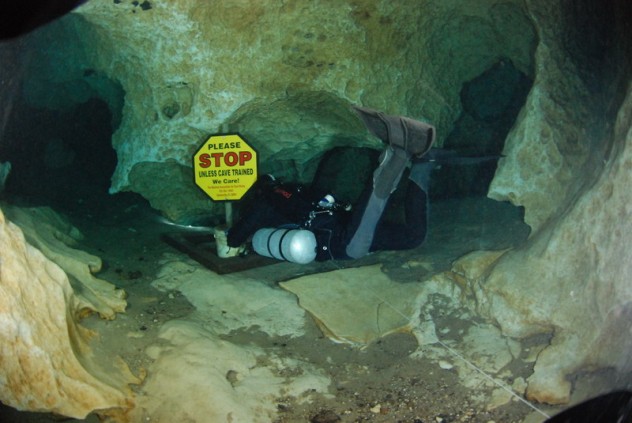 While the prospect of climbing an enormous cliff, and possibly falling to one’s death is sufficiently terrifying, an even worse endeavor is to sink below the surface of the Earth. In an increasingly popular pastime, extreme sports experts combine the skills of the scuba diver and spelunker by swimming through pitch black caves and tunnels hundreds of meters below the surface. The passageways have been mapped to lengths of 400 meters (1,300 ft), with further depths still unexplored. The passageways narrow to the point where passing through becomes an agility test, at only 0.6 meters (2 ft) around in some spaces. Extreme claustrophobia coupled with a fear of drowning and darkness is entirely warranted.

6Bike Path of Moher
The Republic of Ireland 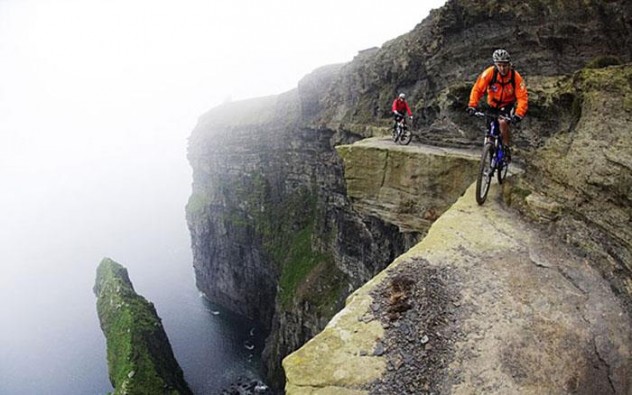 Ireland is a nation associated with rolling green hills, fine whiskey, and lucky clover plants. However, you might need a little more than whiskey impairing your judgment to ride the most dangerous bike path on the planet and a little more than clover to keep the spirits of death away.

The Cliffs of Moher are an ancient sandstone formation in Ireland, formed from the same rocks as the famed Giant’s Causeway. A narrow ledge crowns a sheer face that stretches down 180 meters (600 ft) to the rocky tidal pools below. One would have to be nearly fearless to even walk this path, but extreme mountain cyclists with an apparent death wish chance their lives against a mere gust of wind or tip of the handlebars and somehow balance their bikes on the ledge, which shrinks to 10 centimeters (4 in) in some places.

At just 22 years old, Tyler Bradt approached the roaring, 60-meter (180-ft) Palouse Falls precipice with the intention of turning them into just one more section in his kayaking route. With a number of cameras trained on him to capture the life-or-death bid, Bradt slowly approached the Falls and then sent his river kayak over the edge, plunging the full 60 meters through the massive waterfall before dropping into the river crater below.

He survived the plunge and proved that, to an experienced kayaker, going over a full-scale giant waterfall can be just another part of the route. The risk of impalement, drowning, or blunt force trauma loom large in such extreme attempts.

Paddle boarding is an increasingly popular sport worldwide that hardly ranks as extreme and may be practiced with a minimum amount of experience. Operators stand on top of a floating, 2.5-meter (8-ft) board in calm, shallow water, and propel themselves with a handheld paddle.

However, marine biology researchers and extreme sportsmen like Chris Fallows have turned paddle boarding into a death-defying pursuit. In calm, deep waters off the South African Cape, Fallows has pioneered the use of paddle boards to get as close as 1.7 meters (5 ft) from massive Great White sharks. When the sharks, reaching lengths of up to 8 meters (25 ft), rise to the surface, the paddle boarder can approach. In California, in 2010, Chuck Patterson launched his paddle board to film two Great Whites, and was closely approached by a pair. Paddle board shark watching seems to be taking hold. 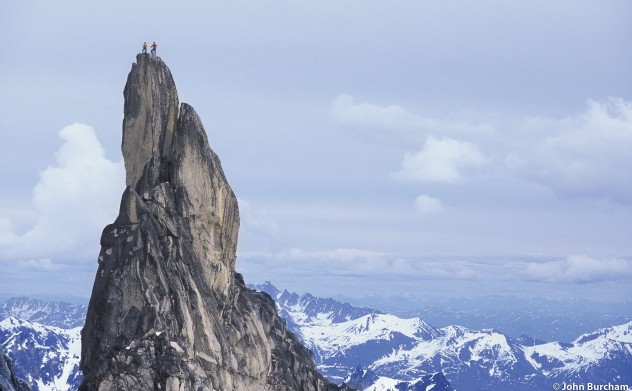 When we think about mountain climbing, we usually imagine a mildly pointed land mass reaching a high elevation. While some mountaineering routes feature sheer drops and craggy slopes that must be navigated, the aptly named Plunger Mountain is not a precipitous ridge, but an unearthly pinnacle that stands out like the towers of Mordor or even the Space Needle among the surrounding peaks. Climbers must first cross the massive glacier at the mountain’s base before climbing the natural church steeple that rises into the sky. At the top, there is barely standing room, and 70-80 degree sheer drops of up to 300 meter (1,000 ft) from the spire onto the mountain’s central section. Imagine this experience as climbing an enormous tree, but without the branches. 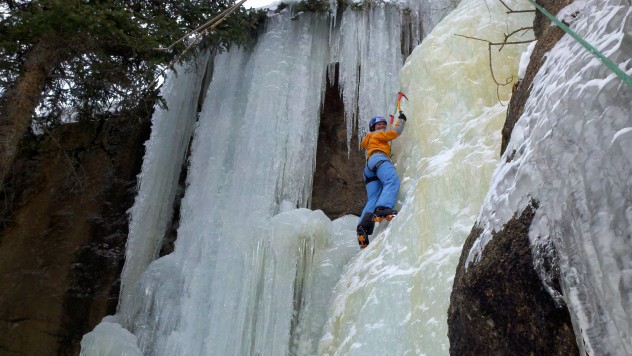 The most extreme and dangerous sports often involve some terrifying combination of perils and skills, or forming a bizarre twist on some existing sport. Rather than climbing a solid, icy peak, waterfall climbers armed with ice picks and ropes scale recently frozen waterfalls. In Canada’s Rocky Mountains on the British Columbia Border, extreme climbers target mountain waterfalls up to 182 meters (600 ft) in height that freeze solid against sheer cliffs. In tackling these routes, an incredible set of dangers present themselves.

Unlike alpine ice, waterfalls contain many brittle, thin and slushy sections due to the highly variable freezing patterns and periodic reheating from the sun. Time of day is critical. Waterfalls without a solid base of frozen water may also break away from the rock wall and collapse, taking the climber with them. 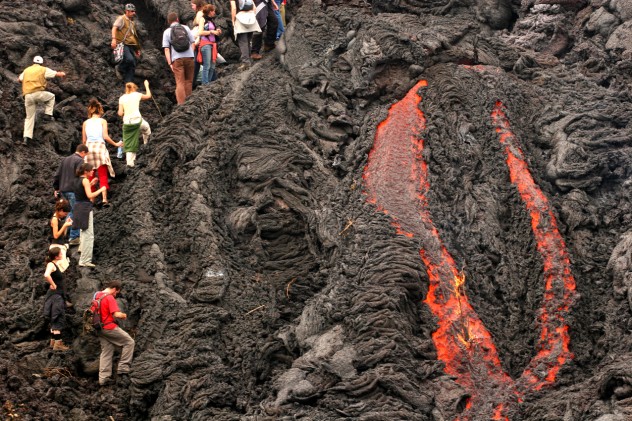 Mountain climbers who get bored combine the elements of air and fire in the extreme sport of volcanic mountaineering. A primary target of those seeking the ultimate experience, Mount Pacaya in Guatemala rises to over 2.4 kilometers (8,000 ft) and has erupted 23 times since Spanish colonization. Despite the risk, the cinder cone is tackled by fearless climbers who experience heat, smoke, and even melted running shoes should they miss a step.

In some sections, climbers scale recently formed basalt just meters away from red hot lava oozing down from above. In 2006, the appearance of new hot lava flows actually increased tourism. If a colder experience is desired, ice climbing can be added to the volcano experience by tackling Chile’s Villarica, which has an ice cap broken only by the lava spewing crater.

Christian Marlberg is a freelance writer and researcher with an interest in travel, weird risks, and the unexplained. He divides his time between wilderness exploration and investigating unexplained mysteries.