The yo-yo is undoubtedly one of 20th century’s most iconic toys—a fact you can thank Pedro Flores for. While working as a bellhop in a Santa Barbara hotel, he was inspired to adapt the yo-yo (a traditional toy from his homeland, the Philippines) for the mass toy market. After opening the imaginatively named Yo-Yo Manufacturing Company in 1928, he then went on to produce over 100,000 before selling his company to the larger toy manufacturer Donald Duncan Yo-Yo Company, which then catapulted the yo-yo into popularity.

But if you’re a lover of Ancient Greek archaeology (and who isn’t?), you’ll know that the yo-yo has been around for so much longer. In dig sites across the Mediterranean, archaeologists found examples of Greek yo-yos made from materials such as bronze and terracotta. Indeed, one example held by the Metropolitan Museum of Art is made from terracotta and dates to between 460 and 450 B.C.. In addition, several ancient vases—such as this example which dates to 440 B.C.—depict children and adults playing with yo-yos. To many, roller skates are synonymous with the 1970s. After all, this was the age of roller disco, a curious sport which attempted to combine the high-stakes world of disco with the unpredictability that comes from wearing shoes attached to wheels.

Actually, the first roller skates were invented in the 1770s by a Belgian named John Joseph Merlin. He was so impressed by his invention that he felt confident enough to unveil it in the most flamboyant way imaginable: at a high society ball, while simultaneously skating around the room and playing a violin. While no evidence remains as to the precise design of his skates, we do know that they were designed without brakes, since this demonstration ended with him skating (at a reportedly high speed) into a mirror.

If we asked you to name the first role-playing game that utilized a scaled gaming board, a gamemaster, and a complex set of rules that governed how players moved and attacked foes, there’s no doubt that you’d say “Dungeons & Dragons” (created in 1974 by Gary Gygax and Dave Arneson).

You’d be wrong, though: enter Kriegsspeil (or “Instructions for the Representation of Tactical Maneuvers under the Guise of a Wargame”). Invented in 1812, it was used by the Prussian Army to teach military tactics to officers-in-training. Players were pitted against each other on a D&D-esque gridded gaming board, which itself was lined with dozens of removable modular tiles that simulated landscapes such as rivers and hills in order to allow the creation of a near-unlimited number of practice battlefields. Game pieces were used that represented not individual soldiers, but entire military formations (such as companies and divisions). Meanwhile, a gamemaster oversaw the process and enforced the game’s litany of rules, as well as ensuring that (since each game was based on an actual real-life battle) the player stuck to these scenarios throughout. However, the first remote-control toy was actually invented in the late 1890s by—and this might not come as a huge shock to some people—famed inventor and Edison punchbag Nikola Tesla. At the 1898 Electrical Exhibition in Madison Square Garden, Tesla unveiled a remote-control boat outfitted with functioning lights, rudders, and a propeller. 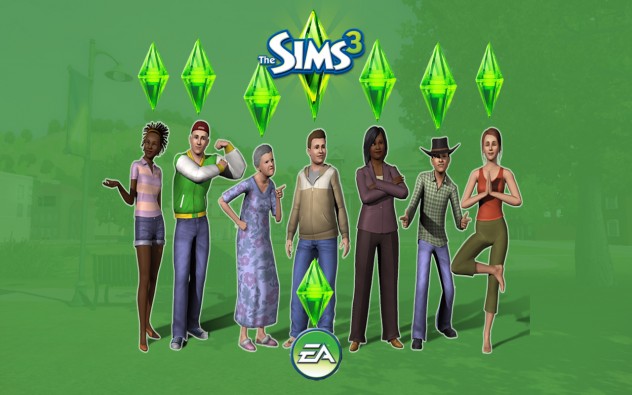 The Sims (2000) is the classic video game where your only task is guiding your personalized character through a life fraught with love, career changes, infinite amounts of decorating, inexplicable house fires, and mysteriously disappearing pool ladders.

With the exception of the latter two, those were also the objectives of the 1985 video game Little Computer People. Like The Sims, players had the ability to customize their houses and command their characters to perform actions (like watching TV, reading, playing poker, etc). You also had the ability to communicate with your character directly; for instance, you could order them to play a specific song on the piano, play a board game with you (because they heard you like games), or send you messages.

The game of paintball that we know and love was invented in the 1970s by two friends, Charles Gaines and Bill Gurnsey, who found an alternative (and painful) use for the paint-pellet guns that until then had only been used by farm workers to mark livestock.

But, if you’d lived in the early 1900s, you might have played an earlier form of paintball known as wax dueling: a sport where men would partake in duels using pistols that fired wax bullets. Competitors were required to wear specialist armor to (ideally) protect them from any serious injury. Indeed, an issue of the Pittsburgh Press (dated August 1908) describes how one player had “the soft piece of flesh connecting the thumb and forefinger” of his right hand shot out, and also warned that spectators risked being blinded by ricocheting rounds. Nevertheless, this sport soon became so popular that it even made an appearance at the 1908 Olympic Games in London. 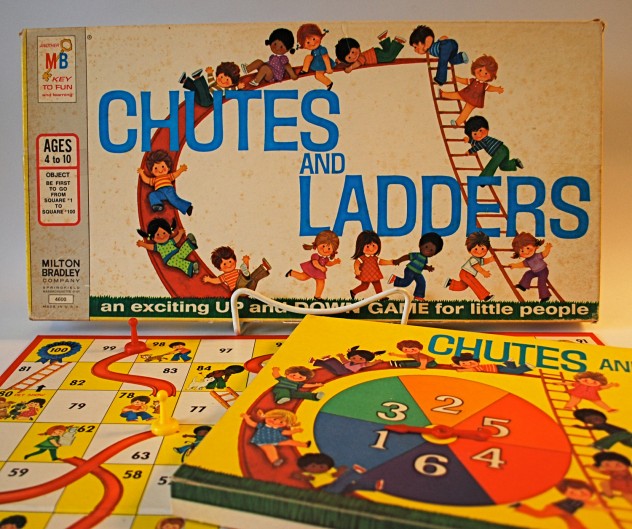 The only way someone wouldn’t know about Snakes and Ladders would be because they’re more familiar with it as Chutes and Ladders.

But we’re betting that you didn’t know that the game has existed in some form since the 16th century. Originating in India, the objective for players back then was still the same—reach the end of the board by climbing ladders and avoiding snakes—but in this version, the ladders symbolized the virtues of faith, reliability, generosity, knowledge, and asceticism. Meanwhile, the snakes symbolized vices such as vanity, theft, rage, greed, pride, murder, and lust. The game aimed to teach players that in order to reach salvation (the end of the board), they must perform virtuous acts throughout their lives, as opposed to indulging in the aforementioned vices. For this reason, there are more snakes/sins on the board than ladders/virtues. The makers wanted to reinforce the idea that a virtuous life was harder to attain—and therefore more worthwhile—than a life of vice. 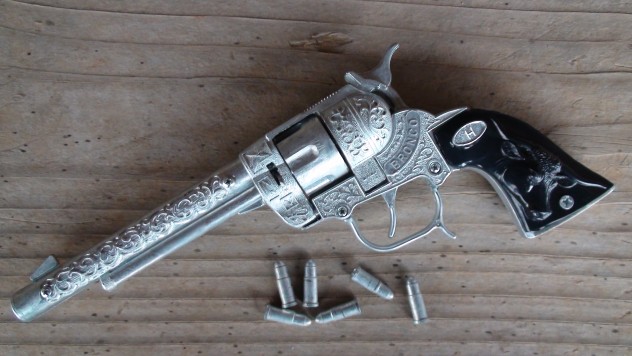 You might think that cap guns are a relic of the 1940-50s. After all, that was the great age of the cowboy movie, when children clamored to relive the adventures of onscreen cowboys such as Roy Rogers, The Lone Ranger, and Hopalong Cassidy.

Actually, cap guns have a history that predates the American Civil War. In 1859, the J & E Stevens Company—a toy manufacturer that specialized in the production of cast-iron toys—released a firecracker pistol similar in design to the modern-day cap gun. Several years later, and after achieving great success with this product, Stevens began producing novelty cap guns in the 1890s, including a model shaped like a sea serpent (which, on pulling the trigger, detonated a cap placed on its jaw) and another shaped like a monkey, which would trigger the cap by slamming a coconut-shaped hammer into it.

Monopoly, for those of you who have actively avoided all forms of popular culture, is the fun, hyper-capitalistic game that’s been tearing families apart since 1934.

However, Monopoly was itself inspired by a 1904 board game called The Landlord’s Game. Created by Elizabeth Magie, The Landlord’s Game was intended to teach people about how property owners at the time made vast fortunes at the expense of tenants like themselves, many of whom were already a hairs-breadth away from poverty. Magie hoped that any children who played the game would recognize the inherent unfairness of this system and be able to protect themselves against it in later life.

Magie later sold the patent to the company Parkers Brothers in 1934, who obviously abandoned her initial goals. The major company had recently acquired the rights to produce Monopoly and wished to gain ownership of any patents which could prove problematic in the future. Duck Hunt is regarded by many as being one of the greatest games ever. Released in 1984, it pits players against an army of (admittedly harmless) ducks to shoot—as well as a dog that will taunt you into your grave. Luckily, players were armed with a lightgun: a gun-shaped controller that mimics any real-life movements onscreen and allows wannabe hunters to blast any wayward ducks.

Incredibly, this wasn’t the first time that people had the opportunity to shoot fictional ducks with imitation firearms for the purposes of entertainment; that honor instead goes to 1936’s Ray-O-Lite Rifle. Created as an arcade game, punters were handed a lightbeam-firing rifle and tasked with shooting as many wooden ducks as they could within a given time. To add an extra element of difficulty to the proceedings, the ducks were also able to move around the shooting gallery courtesy of a hidden conveyor belt. The makers, Seeburg, also created several other varieties of this game, where targets included bears, chickens, and—in an edition made in 1942—even Adolf Hitler himself. Most of us reading this list are familiar with bingo after spending hours on mobile bingo sites—though a few “older” folks will remember it from Church halls of yesteryear. Amazingly, Bingo is a really old game. It originated in 16th century Italy as the lottery-style game “Il Giuoco del Lotto d’Italia”—a game still played across Italy every Saturday Within two hundred years all of the much loved elements of the game had been added (tokens and cards). The game took on its standardized modern form in the 1920s when Hugh Ward created the rules we still use today.

When Adam isn’t destroying the sanctity of childhood, you can find him at his website, One Word Louder, or on Twitter.