Geisha are one of the most iconic images we associate with Japan. If there’s one thing most Westerners can say they know about Japan, it’s that they had those female prostitutes who covered their faces in thick, white paint.

One problem: None of that’s exactly true. Geisha weren’t prostitutes, and they didn’t always cover their faces in white paint. And—for a while—they weren’t even women.

10 The First Geisha Were Men 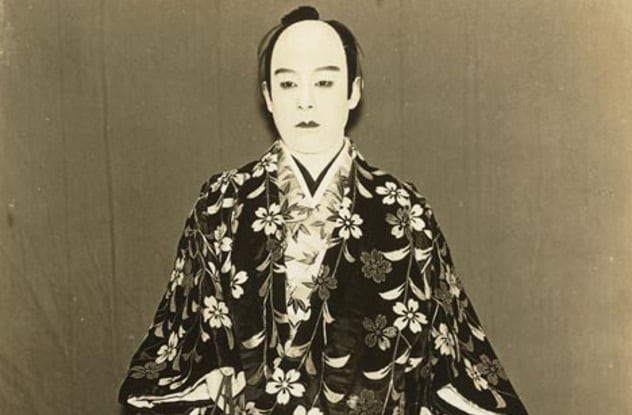 The first female geisha didn’t come around until 1751, and when she started working, the idea that a woman could be a geisha was treated like a weird, novel thought. She was advertised as the “female geisha” because, up until then, every single geisha had been a man.[1]

Male geisha had already been around for hundreds of years. Technically, they didn’t call them geisha until the 1600s, but the idea had been around for more than 500 years. Since the 13th century, there had been men who did exactly what the geisha did: entertained male lords by serving them tea, performing songs, telling them jokes, and making them feel like the most important person in the room.

By the 1600s, those men started calling themselves geisha and working in the brothels of high-class courtesans. They’d entertain the guests and keep them happy while they waited for their turn.

It took until the 1800s for the female geisha fad to catch on. Until then, female geisha were still a rarity, even after the first one broke the mold. Even today, most Japanese people are called female geisha by the feminine word geiko—because, technically, a geisha is supposed to be a man. 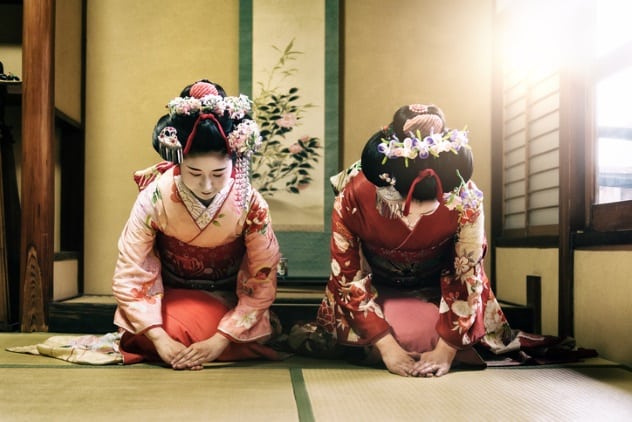 Despite what we’ve heard, geisha didn’t sell their bodies. In fact, they were expressly forbidden from sleeping with their clients.[2]

Geisha were hired to entertain male customers while they waited for their turn with the actual prostitutes: high-class courtesans called oiran. They would play music, dance, and flirt with the men to keep them entertained while they waited.

Their goal was to keep the men from walking out and to make them feel like they were charming. They let the men imagine themselves as studs who could seduce beautiful women instead of desperate johns paying for sex. But they never actually slept with the men themselves. Some brothels even forbade their geisha from sitting too close to the men out of fear that they’d steal the oiran’s customers.

It was something they took pride in. In the 19th century, the motto of the geisha was: “We sell art, not bodies.”

“We never sold ourselves, our bodies, for money,” one geisha has said. “That was not the purpose of what we did; that was what the other women did.” 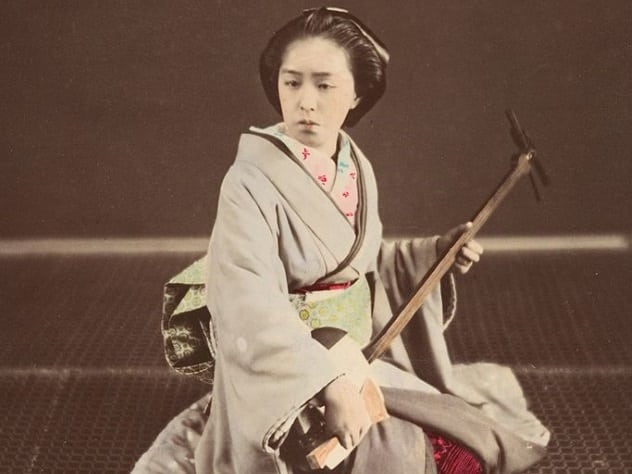 Geisha were artists—in fact, that’s what the word geiko means. It’s a combination of the words “arts” and “child” or, as a simpler translation: “artist.”[3] “Geisha” has been said to essentialy mean “artist,” as well.

It wasn’t a title they took lightly. Geisha worked incredibly hard at their artistic talents. They would spend years training in music and dance, and it would never stop. No matter how old a geisha was, she was still expected to practice her instrument every single day.

Many of them played a stringed instrument called the shamisen, and some wrote their own music. They were famous for writing “melancholy” songs and for designing slow, graceful dances that were filled with complex symbolism.

It took years to get those skills down. In their heyday, they would start training when they were as young as six years old. The geisha houses had their own schools for the arts and would pair each new girl with a personal mentor to them, and the process would take years. On average, a girl would be expected to spend five years or more training before she’d be allowed to call herself a geisha. 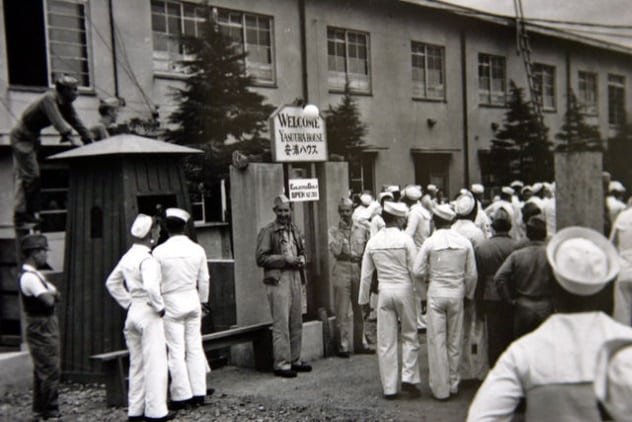 There’s a reason we think of geisha as prostitutes. With the US military stationed in Japan at the end of World War II, prostitutes flocked out to them in droves. And when the men asked, they said they were geisha.[4]

They weren’t real geisha, of course—they just knew that the exotic fantasy of Japanese geisha would lure the foreign men in. And at the end of the war, the Japanese girls were struggling so badly for money that they were willing to sleep with the enemy if it meant having food for a night.

So, yes—statistically speaking, odds are that your grandpa slept with a prostitute while he was stationed in Japan. 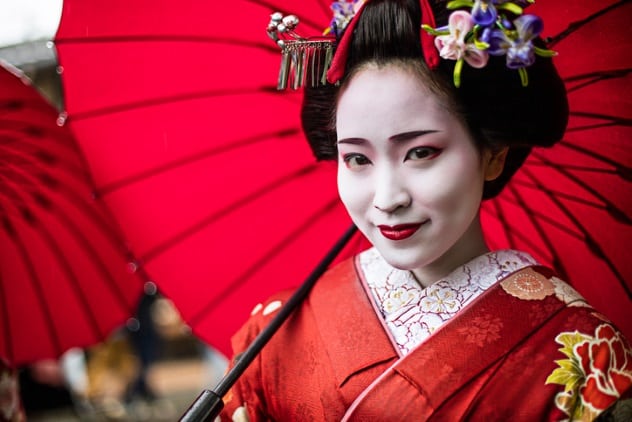 The picture that pops into most of our minds when we try to imagine geisha is a girl with an elaborate kimono and decorations in her hair, her whole face covered in white paint.

This isn’t exactly what geisha looked like. Geisha would put on the white face paint for special occasions, but generally speaking, they wore a far more subdued look that wasn’t too different from the makeup any other woman would wear.

The girls who walked around with white face paint all day long were the maiko : the underage, barely pubescent apprentices who were training to become geisha.[5]

Today, that white face paint look is so iconic that you might catch a modern geisha dressed up as a classic maiko—but if we’re accurate about it, the look you’re really picturing is the look a 13-year-old child. 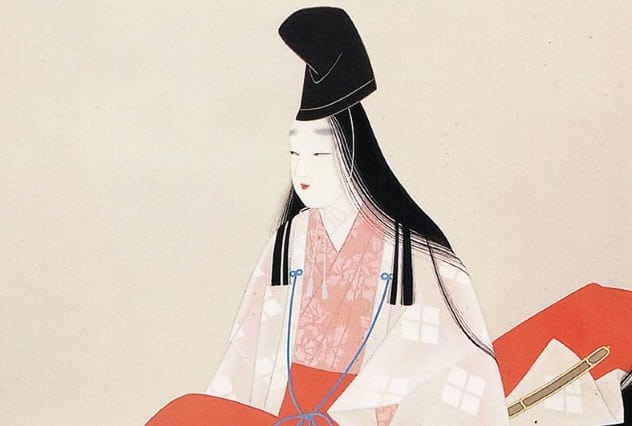 Before the male geisha, there was another group called the shirabyoshi that could be considered an early version of the geisha.[6] These early geisha were women—but they did their best to keep their clients from noticing. Because they’d dress up as men.

The shirabyoshi were female dancers who, in a lot of ways, sound like geisha. They wore white makeup, told stories, put on shows, played music, and entertained guests. They essentially served the same function as geisha, except that they did it all dressed up as male samurai.

Nobody’s 100-percent sure why these women insisted on dressing up like guys, but the most popular theory is that this was just what samurai were into. At the time, most samurai took young boys as lovers. It’s believed that these girls dressed up as boys simply because that was what the men they were trying to impress wanted to see.

4 Most Geisha Had Bald Spots 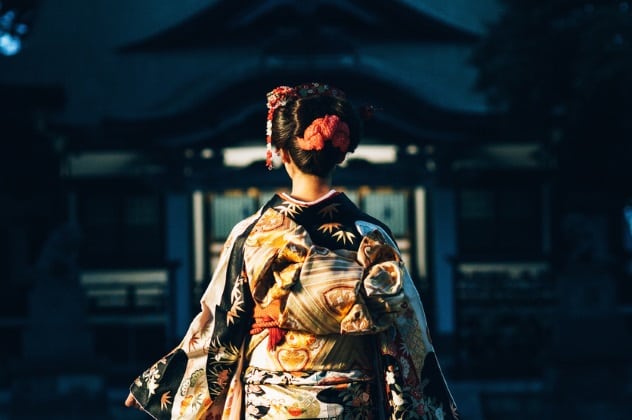 One surefire way to recognize a geisha out of costume was from the bald spot on the top of her head.[7] At work, it’d be covered up with a wig or a comb-over, but secretly, almost every geisha in Japan had a big, hairless spot at the top of her head.

They’d get the bald spot while training as maiko. Maiko were expected to have particularly extravagant hairstyles that required them to pull a small, tight bundle of hair together at the top of their heads. It put so much stress on their hair that it would end up falling out and never growing back.

Geisha called their bald spots the “maiko’s medal of honor.” In Japan, it was considered a mark of pride. It was a clear sign you’d spent years training in the arts.

Of course, that didn’t always go over as well in Europe as it did back home. One geisha came back mortified and humiliated, telling her friends that the Europeans couldn’t understand how the bald spot on her head was a point of pride.

3 The Older A Geisha Was, The More Desirable She Was 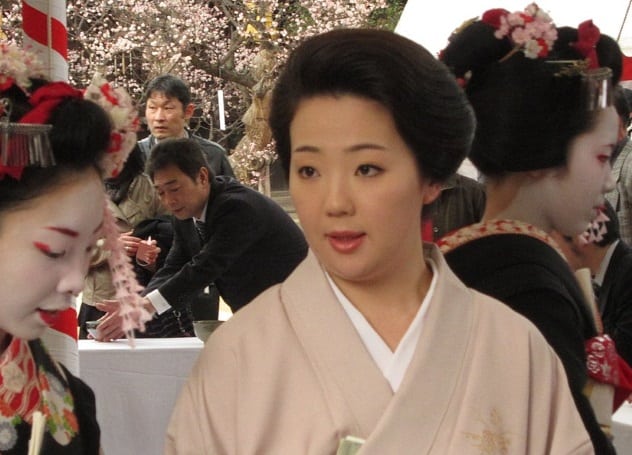 Not all geisha were young. Geisha got more respect the older they got, and in their heyday, the most popular geisha around were in their fifties and sixties.

The geisha believed they only got more beautiful as they grew older, and the older a woman was, the more they’d show off her bare, uncovered face. While a young geisha would still wear white face paint at special events, once she turned 30, she’d be allowed to drop the face paint altogether. By then, the geisha taught, her “natural beauty” had come out.[8]

Geisha would retire if they got married, but if they wanted to stay in the business, they were welcome to do so as long as they wanted. The oldest geisha still working today, Yuko Asakusa, is 94 years old and has been working as a geisha since she was 16.

That 94-year-old geisha commands a premium. She usually gets hired by politicians and incredibly wealthy businesspeople—clients who are willing to pay a little bit extra to be wooed by someone with a bit more experience.

2 Geisha Training Was So Rigorous That It’s Illegal Today 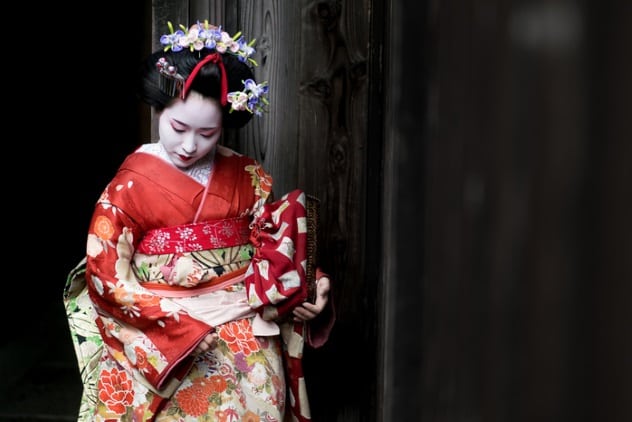 There are still geisha today, but it’s not quite the same as it used to be. In the good old days, the life of a geisha would usually start with her impoverished family selling her to a geisha house, and her training would start when she was six years old.

Today, there are about 250 geiko and maiko working in Kyoto, compared to the 2,000 who worked there a century ago. Modern geisha, though, are very different from the geisha of yesterday. They don’t start training until they’re at least 15 years old, they don’t work near courtesans, and they don’t go through nearly as rigorous of a training system. Some geisha houses today only offer one day of training.

In 1998, some parents actually tried to put their child through the classic training system, but it didn’t exactly work out.[9] They went to jail—these days, selling your daughter is a bit more frowned upon than it used to be.

1 There Are Still Male Geisha 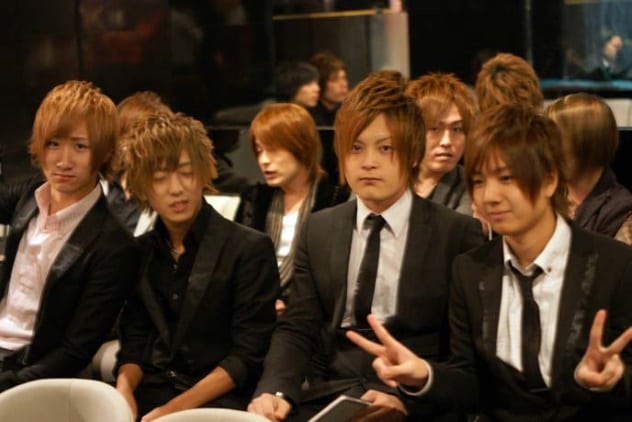 The earliest roots of the geisha, though, are still around. Even today, there’s a still a booming business for male geisha.[10]

There’s a surprisingly large number of men still working as geisha. By one count, there are up to 7,000 male geisha still working in Kabuki-Cho district of Tokyo—although that count worked off of a fairly liberal definition of “geisha.” Still, the male geisha has made a surprising comeback.

It started in the 1960s, when a market opened up for wealthy women who needed a way to pass the time while their husbands were at work. Those husbands were often off cementing business deals at geisha houses, and the women figured they deserved geisha houses of their own—so they started hiring men to entertain them.

There are several clubs today where women can hire these “male geisha,” more commonly referred to as hosuto (pictured above). They usually don’t have the artistic talents of the geisha of the past, but they can still drink with the women, flatter them, and make them feel special.