Game shows came of age toward the end of the Great Depression, and for good reason. People were so hard up for money that the lure of cash and prizes drew in audiences like nothing else. In some ways, the game show can be seen as the precursor to the reality show, taking ordinary folks and immersing them in a world of possibility. But like most forms of entertainment, game shows have their bizarre and sordid side. 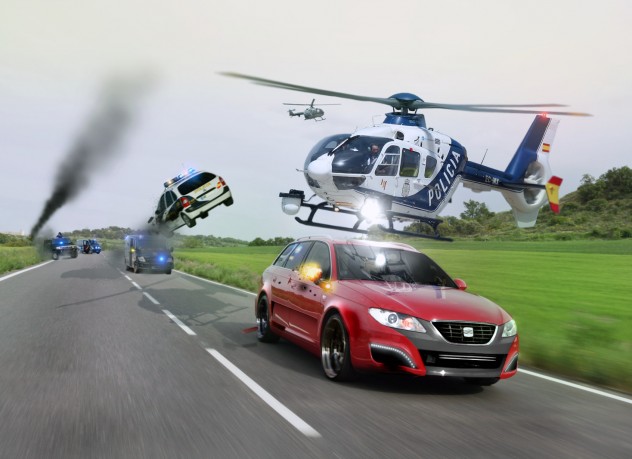 Grand Theft Auto is one of the most popular video game franchises in the world, but one can immediately see serious logistical problems in adapting it to a game show setting. Leave it to the Russians to put this concept on wheels. The Intercept was a game show in which contestants were instructed to steal a car.

Once they were on the road, they had to evade the show’s police force for 35 minutes. If they could escape, they were given the car as a prize. Of course, winning was nearly impossible—the cars were outfitted with tracking devices, making staying ahead of the police a true miracle. 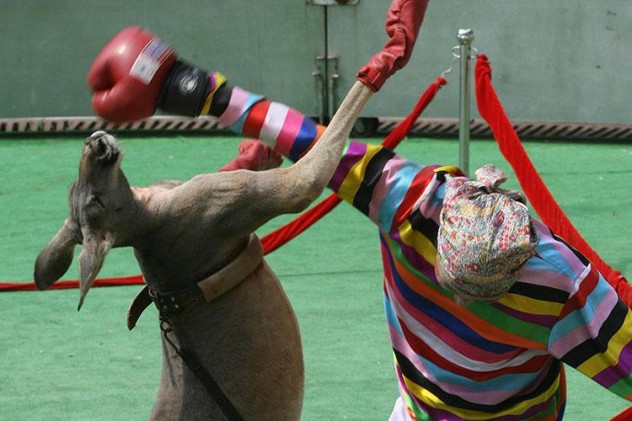 In 2003, Fox aired Man vs. Beast, a show that consisted of people competing (and largely losing) against animals in different events, including an eating contest between former Nathan’s Hot Dog champion Takeru Kobayashi and a half-ton Kodiak bear. The most distasteful competition occurred between 44 dwarfs and an Asian elephant in an airplane-pulling race.

The only event clearly dominated by man was an obstacle course race between a US Navy SEAL and a chimpanzee. The SEAL, Scott Helvenston, wouldn’t have long to celebrate his victory though. The following year, he started as a contractor for the private security firm Blackwater and became the victim of one of the most savage acts of violence in the Iraq War. His team was ambushed by insurgents, torched, butchered, and dragged through the streets.

8 The Price Is Right 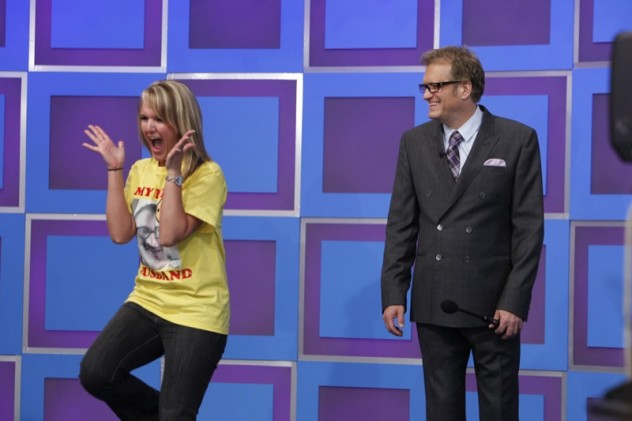 Each episode of The Price Is Right concludes with two finalists guessing the price of a showcase, an assembly of big-ticket items like cars, furniture, and vacations. The contestant who guesses close enough to the actual price (without going over) wins.

For the most part, it’s an inexact science. But on September 22, 2008, contestant Terry Kneiss blew everyone away when he buzzed in with the exact amount of his showcase ($23,743), which consisted of a billiards table, a karaoke machine, and a 17-foot camper. Carey’s reaction was noticeably deadpan, as he feared yet another game show scandal might have been in the works.

However, Kneiss hadn’t cheated; a longtime viewer of the show, he merely noticed that many of the items were repeatedly featured. He memorized the prices of many items, and fortunately, those appeared in his showcase. And the $743? That was a fluke. Kneiss randomly used his PIN number. 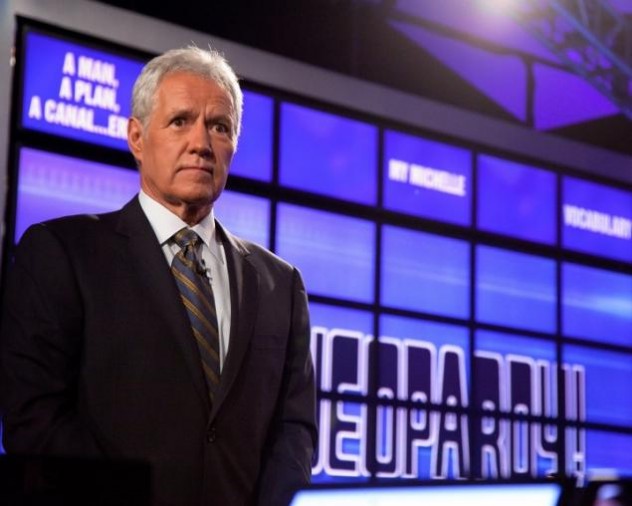 Quiz show Jeopardy! is perhaps best known for the 2004 reign of Ken Jennings, a Mormon genius featured on 75 episodes of the show, until losing on the Final Jeopardy answer “Most of this firm’s 70,000 seasonal white-collar employees work only four months a year.” Jennings responded “What is Fed-Ex?” but the correct question was “What is H&R Block?”

In response to the kind of advertising that money couldn’t buy, H&R Block granted Jennings free tax preparations and financial advice for life. He would go on to appear in several more Jeopardy! tournaments, including one against IBM “artificial intelligence” supercomputer Watson (who beat him soundly).

However, winning Jeopardy! is only a matter of having the most money of three contestants. While Jennings often triumphed by tens of thousands of dollars, in 1993, Air Force lieutenant colonel Darryl Scott won a game with a score of $1. In case you’re wondering, the maximum amount one can win in a single game, provided you answer every question correctly, land on the Daily Double questions last in each round, and bet the maximum amount in Final Jeopardy is $566,400. 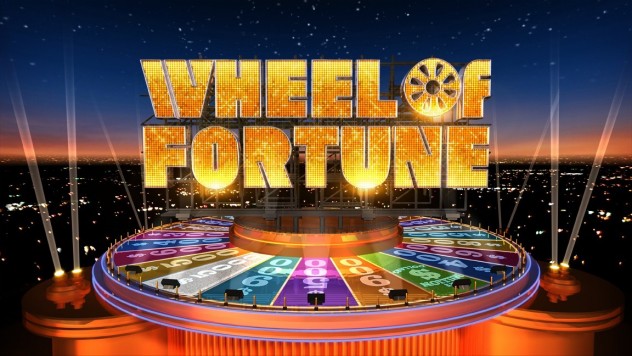 Wheel of Fortune, which generally airs right before Jeopardy!, tends to aim at a less academic audience, with contestant auditions that rely less on intelligence than personality. Amiable host Pat Sajak runs the show while statuesque cougar (she’s 56!) Vanna White manipulates the electronic letter board.

Today, players can win hundreds of thousands of dollars, cars, and exotic vacations, but back in the 1980s, the show was “boring” according to Sajak. Instead of competing to win cash, players won symbolic funds which could be used to buy lame prizes like appliances. In 2012, Sajak admitted that the format took so long to film that he and Vanna used to sneak off for margarita-fueled dinners at a nearby restaurant. He claimed he and Vanna would have “two or three or six” margaritas before returning to the set, where they would “have trouble recognizing the alphabet”. 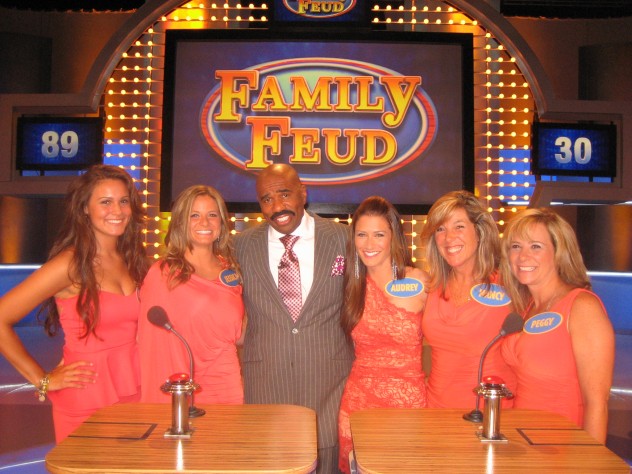 Family Feud premiered in 1976 and was hosted by Richard Dawson, a charming Englishman known for kissing the female contestants. Dawson was succeeded by Ray Combs, a somewhat-forgettable figure who hosted the show for six years. He was infamous for walking off the set after the final episode without even saying goodbye to anyone. In 1994, he was in a car accident that left him with permanent, painful spinal damage.

His career stalled, he suffered financial setbacks (including the foreclosure of his home), and he and his wife filed for divorce. Combs became psychotic, spending time in the hospital after a suicide attempt. Upon his release, he proceeded to destroy the inside of his home and smash his head into the walls. Police were summoned and took him to the Glendale Adventist Medical Center in Glendale, California to be evaluated. The next day, he hanged himself in the closet of his hospital room with his bedsheets. He was just 40 years old. 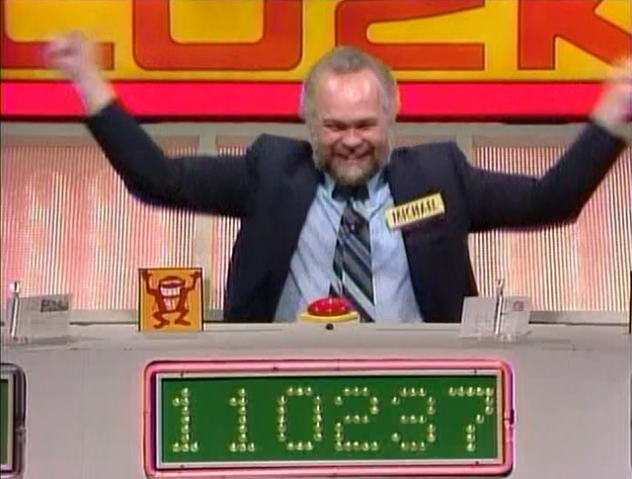 Press Your Luck was a mid-1980s game show that was part quiz show and part “dumb luck.” Contestants played against an illuminated game board that lit up prizes in different patterns, and they could stop it at any time to win the cash or prizes it landed on.

If they stopped the board on a “Whammy” (a caricature of a villain), they would lose everything. It all seemed entirely random until 1984—when unemployed ice cream truck driver Michael Larson appeared on the show and begun to run the board, playing 45 rounds in a row before striking out. His turn went on so long that it had to be incorporated into two episodes of the show.

Larson won an improbable fortune of $110,237. An investigation by CBS found that he had been using the stop-motion function on his VCR to painstakingly review episodes of the show. He realized that the random illumination of the game board actually worked in a predictable sequence. They determined this was not cheating and gave Michael Larson the prize money, but they made sure to reprogram the game board so that no one could duplicate the stunt. 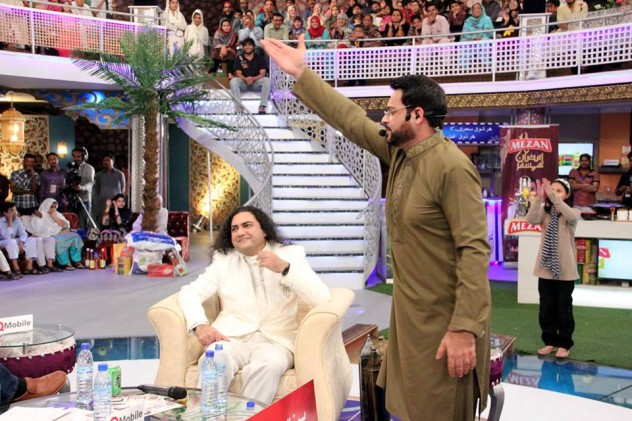 Amaan Ramazan is a Pakistani game show where guests are presented with prizes like laptops, smartphones, and land deeds for correctly answering questions about Islam.

Hosted by the lively Aamir Liaquat Hussain, one of the most famous television personalities in the country, the show has been criticized by opponents for doing wild stunts in the name of ratings. But during the 2013 holy month of Ramadan (which ran from July 9 to August 7), a time when shows in the Islamic world fight for ratings, Hussain unveiled his most audacious stunt yet: He gave away orphaned babies.

Although it appeared on the show that the babies were given away as prizes, the families were approved and fully vetted beforehand. Although this may seem like a controversial move, Amaan Ramazan may have actually saved these children’s lives. Babies are abandoned in Pakistan frequently, especially girls, who are seen by many as less desirable. 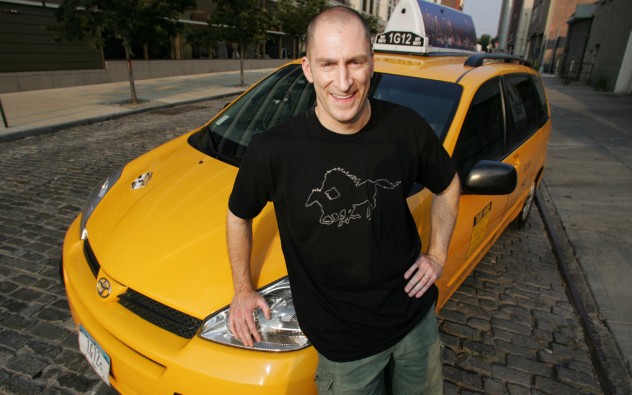 Cash Cab is a quiz show in which a cab driver lobs increasingly difficult trivia questions at taxi passengers while driving them to their destination. It has a three-strikes rule that dumps you on the sidewalk if you rack up three wrong answers during your ride.

The Canadian version of the show endured an ugly scandal in 2011, when the Cash Cab struck and killed a 61-year-old pedestrian in Vancouver, British Columbia. Fortunately for the fate of the show, the accident did not occur during filming, but later in the day when one of the show’s producers was bringing the cab back to a garage for the night.

There have been more than two dozen international versions of the program throughout the world. The American version went off the air in 2012.

1 Who Wants To Be A Millionaire? 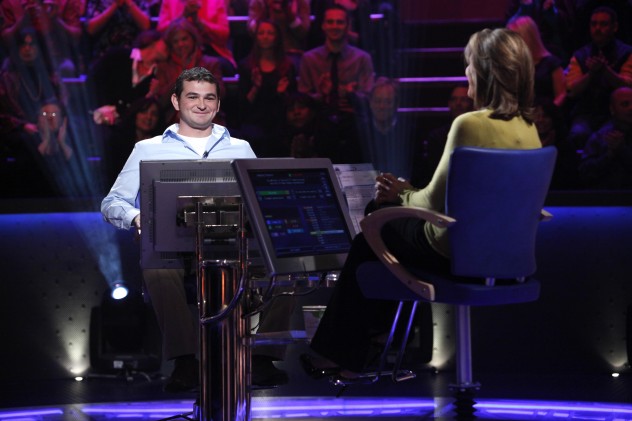 Who Wants To Be a Millionaire is notable for its “lifelines,” which contestants can use to seek help with a particularly tricky question. Although the lifelines have evolved somewhat throughout the run of the series, two of the common choices were “phone-a-friend” and “ask the audience.” Objectively, the best “phone-a-friend” moment occurred on November 19, 1999, when John Carpenter called his father while answering the million-dollar question. Carpenter didn’t need help—he just wanted to tell his dad he was going to win. And he did, becoming the first million-dollar winner in the US version of the show.

In “ask the audience,” the audience is prompted to provide their answer to the question, usually leaving the contestant with a clear majority choice. In the American version of the show, this is typically the correct answer. However, audiences in international renditions of the show can be quite fickle, instead choosing to troll the contestant and provide the wrong answer intentionally. This has been observed in the French version, and especially in the Russian version.