Volcanoes. Fiery messengers of death and destruction, from deep within the planet. While natural disasters such as tornadoes and tsunamis are terrifying, volcanoes have a uniquely hellish quality. Of course, they are more than just mountains that spit out molten rock—they feature heavily in our culture and shape the land we live on. 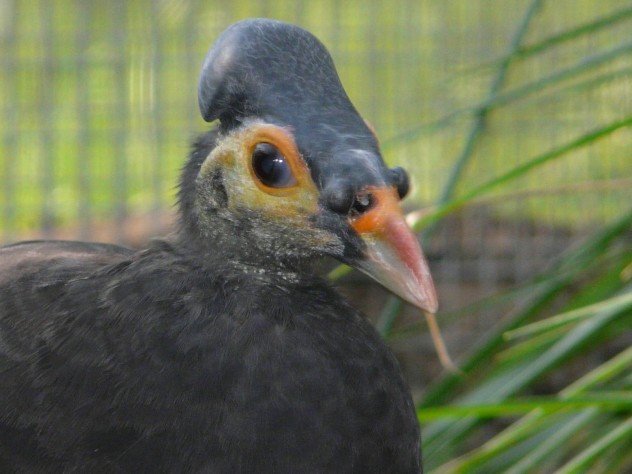 Not all creatures think of volcanoes as instruments of destruction. One very strange bird actually depends on them to survive. The Maleo is a highly endangered species that relies on geothermal energy to incubate its eggs. During nesting season, the maleo specifically seeks out exposed volcanic areas and uses their heat for the eggs to hatch. They do this because their eggs are so enormous—about five times the size of a chicken egg—that the female, which is only the size of a small duck, would have no chance of incubating them on her own. 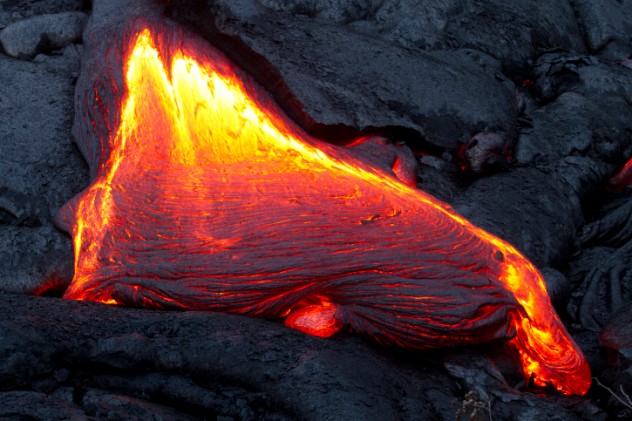 The tongue-twistingly named Ol Doinyo Lengai is a solid contender for the prize of the strangest volcano in the world. This Tanzanian volcano is relatively impressive in size and appearance, being 2,200 meters (7,200 ft) tall and looming over the surrounding grasslands. However, its true power lies in its lava.

Ol Doinyo Lengai is the only volcano in the world to erupt “black lava,” a dark, mud-like carbonatite substance that is unlike anything any other volcano produces. Geologists often compare this lava to something you might find on another planet. Ol Doinyo Lengai’s lava is significantly cooler than ordinary lava—about 540 °C (1,000 °F). That means it sometimes cools in midair, raining down like shards of glass. And since it’s a very active (though relatively harmless) volcano, experts who are willing to make the arduous trek to see it are often rewarded with the sight of black lava fountains, pools, and constructs. 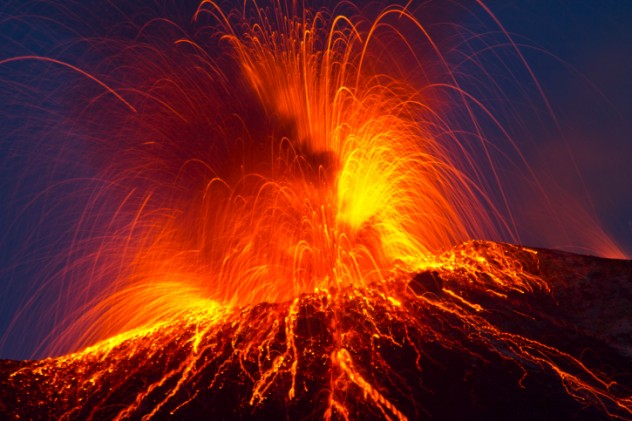 Volcanoes have often been associated with divinity. Many cultures that lived in highly volcanic areas have worshiped volcano gods, the most famous probably being Vulcan. He was the Roman blacksmith of the gods, whose forge was said to be on the volcanic island of Vulcano, the place after which volcanoes are named. Vulcan was essentially a repackaging of Hephaistos, god of fire and craftsmanship in the Greek pantheon.

Hawaiians, who live in one of the most volcanically active areas in the world, worshipped Pele, the goddess of volcanoes, as one of their primary gods. According to them, a fight between Pele and her older sister, Namakaokahai, created volcanoes, and Pele commanded them at will. Native Americans had a similar legend about dueling gods—some of their volcano creators were called Llao and Skell, although various tribes had other legends.

Perhaps the most curious legend about volcano worship comes from the Aztec Empire, where the massive twin volcanoes Popocatepetl and Iztaccihuatl were actually humanized. Aztecs built effigies of the volcanoes with human faces and treated them with a reverence similar to that shown to human kings or holy men. This practice continues even today. The larger of the mountains is known to the locals as Gregorio and is usually depicted as a big guy with long, blond, wavy hair. 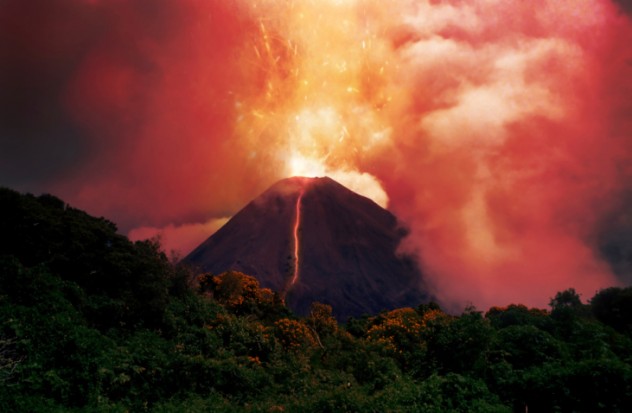 The Volcanic Explosivity Index (VEI) was invented in 1982 to describe the destructiveness of explosive volcano eruptions. The index ranks every volcanic event that fits the criteria on a scale of zero to eight. Eruptions on a scale of zero to two are daily or weekly events, and Category Three explosions, ranked “severe,” with an eruption plume of up to 15 kilometers (9.32 mi) happen every year.

Categories Four and Five happen every few decades or centuries. Their destructive power is cataclysmic and their plumes can be 25 kilometers (15.53 mi) high or more. Categories Six and Seven are called “Colossal” and “Super-colossal.” At that point, they’re not so much volcanoes as they are giant, flaming shrapnel bombs—they cause tsunamis, fling hot rocks hundreds of miles away, and cover the skies in ash. The unbelievably powerful explosion of Krakatoa in 1883, which killed 36,000 people with tsunamis and thermal trauma, was a Category Six.

Category Eight or “Mega-colossal” explosions are at least 100 times more powerful than Krakatoa and can create calderas the size of a small country. Luckily, no VEI-8 eruptions have happened in human history. VEI-8 explosions occurred in Yellowstone (640,000 B.C.), Toba (74,000 B.C.), and Taupo (24,500 B.C.), as well as multiple other locations around the globe. 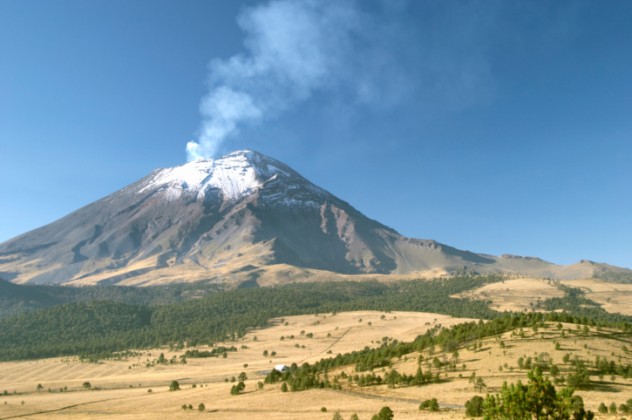 Many people think of volcanoes as simple mountains that spew magma. However, there are three distinct types of volcano, as well as a phenomenon that is often considered to be a fourth type. Out of the three classic mountain-type volcanoes, the cinder cone is what most people think of when they imagine a volcano—a hollow mountain with an open top and a lava pit. The second type, composite volcanoes, are steep, symmetrical mountains built of several layers of lava vents, ash, cinder, and other material which, during eruptions, often form massive bombs that fly through the air. The third type, the shield volcano, is most commonly found in Hawaii. They are relatively flat mountains that can be up to 160 kilometers (100 mi) across. The insides of a shield volcano are almost entirely composed of massive lava flows.

The fourth type is not always categorized as a volcano at all. It’s a strange phenomenon called a lava dome. These domes are massive concentrations of thick lava that, upon eruption, is caught in a valley or caldera, unable to flow very far. Instead, it congregates into a large dome that slowly cools from the outside. Although this seems relatively harmless, the formation of a lava dome is sometimes accompanied by massive, explosive eruptions. 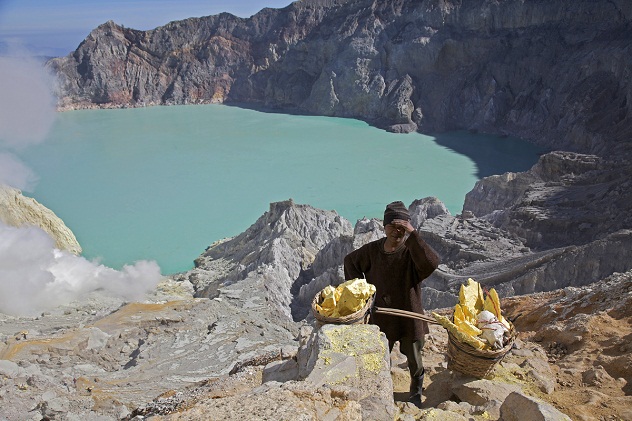 Ijen is an active stratovolcano in Java. Due to the site’s high volcanic activity, it has extremely high sulfur concentrations. This has provided the area with a steady source of mining income. It has also given them one of the most hellish lakes in the world.

The volcano’s crater is filled with water. It’s called Kawah Ijen, and it is the world’s largest acid lake. The entire lake has been contaminated by sulfur, turning it into deadly sulfuric acid. The pH of the lake’s water is 0.5, making its contents essentially battery acid. The lake will eat away almost anything, up to and including metal. Its fumes are lethal, and breathing is difficult even with a gas mask.

Because of the lake, eruptions from Ijen are considered particularly dangerous. Not only does the volcano have a shower of all-consuming acid on top of the usual arsenal of volcanic destruction, but the draining of the acid lake can also cause extremely destructive lahars—giant slides of mud and debris. 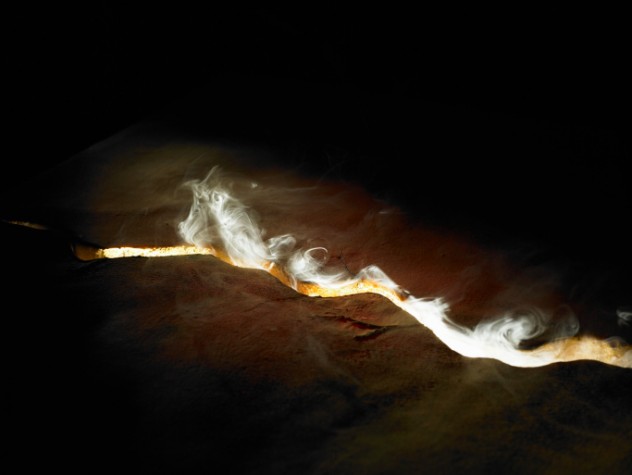 Volcanoes are particularly frightening because they can appear in an instant. A prime example of this is the Mexican volcano Paricutin. In 1943, farmers started to hear strange rumbling noises and found a long crack in the ground. It was just about shin-deep, so they were not particularly concerned at first. However, the noises deepened, the crack widened, and the earth started rising. Within hours, the ground started coughing up sulfur and ash. A volcano had been born literally overnight.

Although it was initially no more than 1.8 meters (6 ft) tall, Paricutin grew rapidly. Just 24 hours later, its height was 50 meters (165 ft). Six days later, it had doubled in size. And all the time it spat out lava. Although the volcano was relatively small, the surrounding areas, including the nearby town of San Juan, were slowly consumed by the lava flow, and the locals had to flee.

Meanwhile, Paricutin became internationally famous—geologists and tourists alike flocked to observe the young volcano. They had plenty of time to look at it, too—Paricutin erupted continuously for nine years. By the time it died down, it had covered 25.9 square kilometers (10 sq mi) of fertile farmland in a thick lava casing. 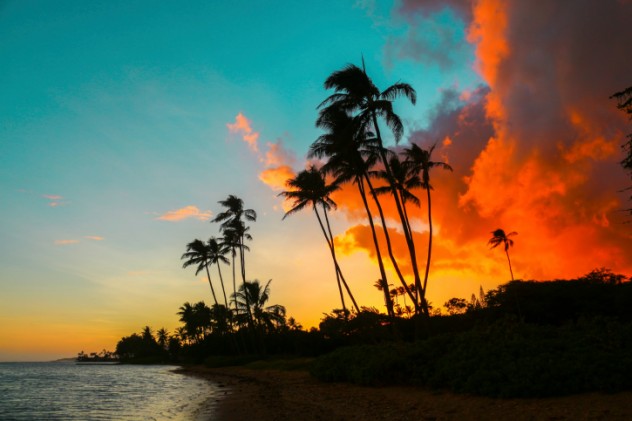 When discussing volcanoes, the giants Mauna Kea and Mauna Loa must be mentioned. They are massive shield volcanoes that loom ominously over the island of Hawaii. In fact, they are so huge that they make up most of Hawaii.

The taller of the two, Mauna Kea, rises 4,205 meters (13,795 ft) above sea level. However, much of its mass is underwater. When measured from the ocean floor, Mauna Kea is well over 9,000 meters (29,500 ft) tall, making it easily the tallest volcano in the world. In fact, measured in that way, it is the highest mountain as well—Mount Everest is only 8,850 meters (29,035 ft) tall. Hawaiians hold the inactive, but still magnificent, Mauna Kea in extremely high regard, both as a monument of nature’s magnificence and an awesome ski resort.

Mauna Loa, on the other hand, is very much active. Although it only rises 4,170 meters (13,680 ft) above sea level, its true height rivals that of Mauna Kea. It is also much more massive, making up about half of the island of Hawaii. At 96.5 kilometers (60 mi) long and 48 kilometers (30 mi) wide, this monstrous bulk of volcanic rock is a humbling sight—especially because it has erupted 39 times. The last eruption was in 1984, and the volcano is showing signs of waking up once again. 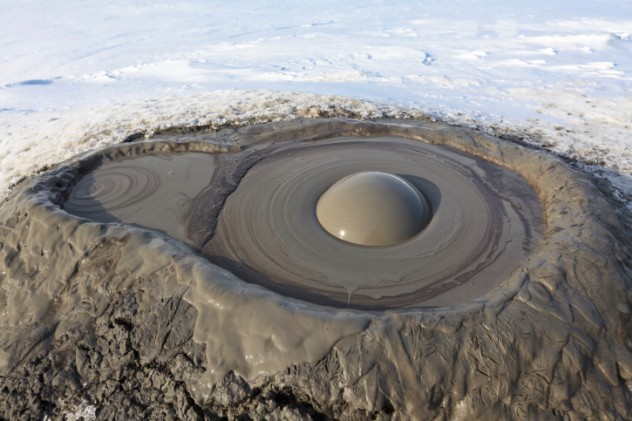 On September 24, 2013, an earthquake of 7.7 on the Richter scale shook the sea floor near Pakistan. A few hours later, there was a new island in the sea. The oval-shaped, 91-meter (300 ft) island came seemingly out of nowhere, but that was just the beginning—the island also emits flammable gas, making it dangerous to explore.

It was created by the sudden appearance of a mud volcano, a type volcano that spews hot mud instead of ordinary lava. Since the volcano was on the ocean floor, the mud was soon cooled by the water and formed an island.

The scientists are still trying to work out the true nature of the phenomenon—some experts think there may be other volcanic or tectonic activities involved—but the locals have a ready explanation. According to them, a similar island called Zalzala Koh (Quake Hill) existed 60 or 70 years ago. Zalzala Koh eventually disappeared into the ocean, but now they say the earthquake has finally brought it back. 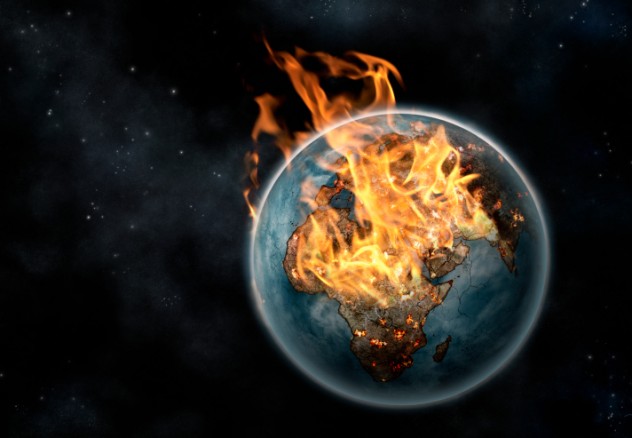 The short-term effects of volcanoes—rains of fire, rivers of magma, panic and screaming—are terrifying enough, but they pale in comparison to the long-term effects. In fact, it is thought that natural processes such as volcanic eruptions could very well be a leading influence on climate change.

There are three main types of climate-changing effects—the ozone effect (where sunlight breaks oxygen into ozone in the stratosphere, enabling it to deflect the sun’s ultraviolet rays), the greenhouse effect (where greenhouse gases get trapped in the atmosphere and cause global warming), and the haze effect (where dust and ash particles get trapped in the atmosphere, blocking sunlight and causing global cooling). Volcanic activity can greatly contribute to each of these effects—volcanic eruptions release acid that destroys ozone, large amounts of carbon dioxide, a notorious greenhouse gas, and ash. Because of the amount of ash they release, easily their biggest impact is on the haze effect. Strangely, this means that a sufficiently large and fiery volcanic explosion actually cools the planet down instead of heating it up. 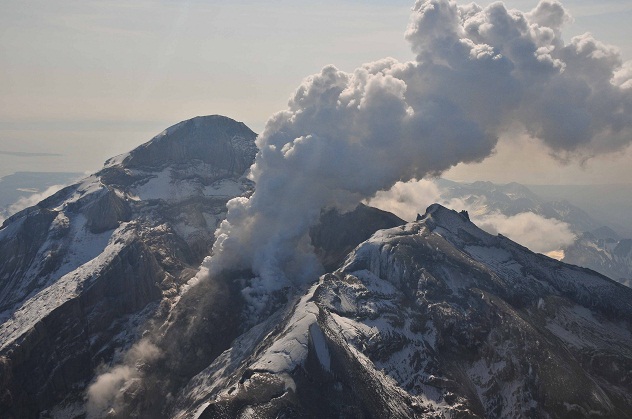 Volcanoes are scary by default, but the Redoubt Volcano in Alaska took fear to a whole new level in 2009—right before it erupted, it started to scream.

The scream, a sped-up version of which can be heard here, sounds exactly as you’d expect. It starts as the deep, ominous roar of a huge stone monster, until it rises into a high, terrifying crescendo. It’s the perfect “I’m coming to get you” scream for the most terrifying force of nature. And it gets worse—experts are not sure what caused it. Sure, they have various theories about gases and tectonic strain, but until they specifically state otherwise, it might be safest to assume it was the war cry of Mother Nature herself.