Most historical wars are odd by nature. Blowing up, shooting, and torturing thousands of people seems downright bizarre when you consider that it was usually all caused by the actions of a small group of power-crazed individuals. On a brighter note, war has led to some of the strangest and most interesting stories in history. 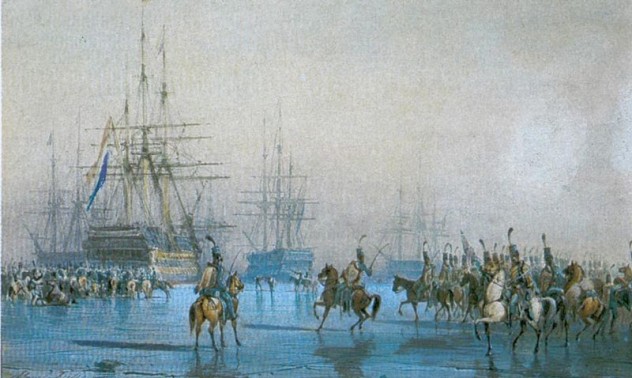 In January 1795, the French Revolutionary Army was advancing into the United Provinces (now the Netherlands) when the cold weather led to one of the strangest battles of the era. Johan Willem de Winter was sent with a group of French Hussars to capture the strongpoint of den Helder and to keep any Dutch ships from escaping to friendly Britain. When the general arrived, he found that a Dutch fleet, which had been anchored at den Helder, had become stuck in thick ice. Silently approaching the fleet by marching onto the ice, the Hussars were able to surround the ships and force the Dutch sailors to surrender. This is the only time in recorded history that a fleet has been captured by a cavalry charge. In May 1943, L. Ron Hubbard, commander of the PC-815 submarine chaser and future founder of the Church of Scientology, was ordered to take his ship from Portland to San Diego. On May 19, at 3:40 AM, Hubbard detected what he thought to be a Japanese submarine on his sonar. At 9:06 AM, two American blimps were called to help with the search. By midnight on May 21, a small fleet had been called in to help Hubbard hunt the elusive enemy, including two cruisers and two Coast Guard cutters. The ships dropped over 100 depth charges. After an engagement lasting 68 hours, with no sign of the enemy being damaged or even moving, Hubbard was recalled. A report, with testimonies from other ship commanders on the scene, later found that Hubbard had fought a 68-hour naval battle against a well-known and well-charted magnetic deposit on the sea floor. Later, Hubbard nearly caused a diplomatic incident by bombarding Mexican territory. In the autumn of 334 B.C., Alexander the Great was bogged down trying to take Halicarnassus (modern Bodrum) from the Persians. The defenders were well-supplied, and their walls were built to resist the recent invention of catapults. This long and difficult siege led to many a man in Alexander’s army getting bored, including two hoplites of the Perdiccas brigade. The two were bunkmates in the same tent, meaning that they often shared tales of their exploits. One day, while drunk, the two got into a fight over who was braver. Eventually they agreed that to settle the argument they would assault the walls of Halicarnassus—all by themselves.

The soldiers within the city, seeing only two men approaching, left the walls and rushed the pair. The two are reported to have slain many of their attackers before being overwhelmed and killed. However, soldiers from both forces saw the small fight and rushed to help their respective sides, resulting in a full-blown battle. During the attack started by two drunk men, the lightly guarded walls were nearly captured by the attacking forces on several occasions. Had all of Alexander’s forces been dedicated to the attack, the city would have likely fallen to two drunk guys trying to test their manhood.

7The British Get The Ottomans High 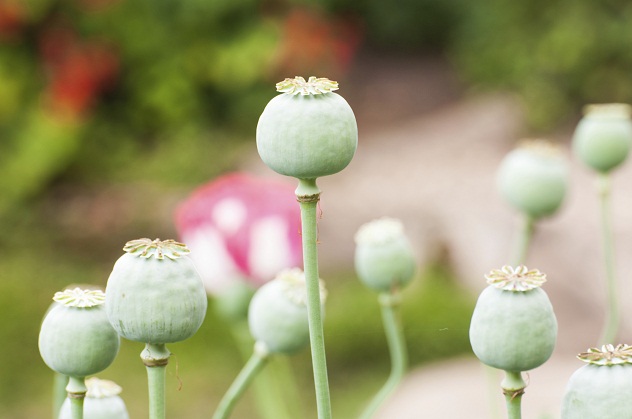 On the 5th of November, 1917, the British were striking back at the Ottoman Empire, who had attacked their colonies in the region during World War I. The Turks were forced back to Sheria, just south of Gaza. Richard Meinertzhagen, a member of British intelligence, decided to give the besieged Ottomans a gift, dropping cigarettes and propaganda leaflets from a plane. Unbeknownst to the Turks, Meinertzhagen had laced these cigarettes with opium in an attempt to drug the defenders, who happily lit up. When the British attacked Sheria the next day, they came across very little resistance. What they did come across were Ottoman defenders so high that they could barely stand, let alone raise their rifles in defense of the town. 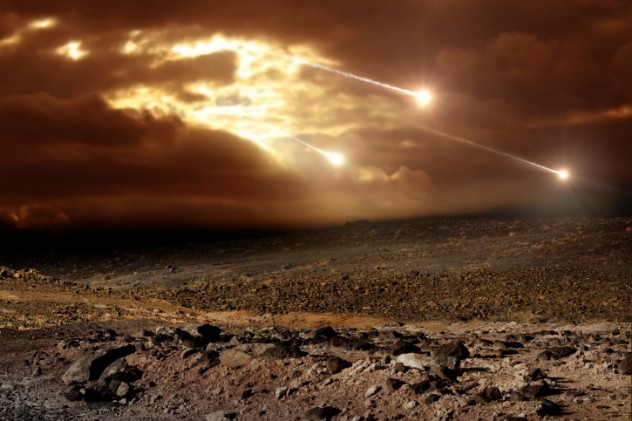 Lucullus, a politician of the Roman Republic, was a major commander during the Third Mithridatic War of 76–63 B.C. Hoping to attack the Kingdom of Pontus while its army was away, Lucullus was surprised to find his invasion force met by King Mithridates of Pontus himself. With the two armies on the verge of battle, a “fireball” meteorite was suddenly sighted in the sky. The molten object then slammed into the ground between the armies. Reports from each side suggest that both forces, fearing the wrath of their respective gods, fled the battlefield as quickly as they could, making the visitor from out of this world the first alien victor of a human battle. Lucullus was eventually successful in his conquest of Pontus, though failed attempts to invade Armenia led to the Senate relieving him of his command.

5A Bathroom Break Causes A War 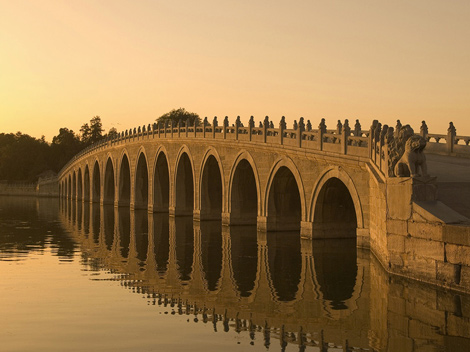 The Marco Polo Bridge Incident took place on July 7–9, 1937. The Bridge, located in Beijing, was right on the border between the Empire of Japan and China. Since it was a period of high tension, the buffer zone was being occupied by both Japanese and Chinese troops. After unplanned night maneuvers by the Japanese on the night of the 7th, there was a brief exchange of gunfire. After the fire ceased, Private Shimura Kikujiro, of the Japanese Army, failed to return to his post.

After the Chinese allowed a search for Kikujiro, the Japanese, thinking the private had been captured and looking for any excuse, attacked the Chinese positions during the early morning hours of July 8. Both sides took numerous casualties. This battle eventually resulted in the Second Sino-Japanese War, which itself eventually blended into World War II. Private Shimura returned to his position later that day, bewildered at the claims that he’d been captured and saying that he’d become lost after going to the toilet in a secluded spot. The Battle of Chosin Reservoir between encircled United Nations forces and Chinese troops raged from the 27th of November until the 13th of December, 1950. 120,000 Chinese troops entered North Korea and eventually forced the 20,000-strong United Nations force to retreat from their defensive positions at the reservoir. Though the Chinese took great casualties, the battle is still seen as a Chinese victory as it brought about the complete UN withdrawal from North Korea. One of the factors that may have contributed to the UN loss at the reservoir were Tootsie Rolls.

After running desperately low on ammunition, the mortar division of the US Marines risked losing aircraft and supplies to anti-aircraft fire. They decided to call in a resupply by parachute. Unfortunately, someone in the supply depot, not knowing that mortar shells went by the code name “Tootsie Rolls,” sent a plane loaded with candy into the war zone. The delicious treats, which were eaten rather than used as projectiles, reportedly kept morale high until the United Nation Forces were forced to break their encirclement and flee to the south.

3A Blind King Charges Into Battle On August 26, 1346, an English and Welsh army met a French force at Crecy, France. The Bohemian King, John, had joined the conflict on the French side and accompanied their army with his own knights. In 1340, while on a crusading mission, John had lost his sight completely. However, after being a warrior for most of his life, he didn’t really seem to take much notice of his new disability.

Some way into the melee of the battle, it was obvious that the English and Welsh were going to win, with France’s Genoese mercenaries being routed by their longbows. John, however, was unable to see the full extent of the retreat. His knights, perhaps too afraid to tell the King to run, were unable to persuade him that charging the enemy wasn’t the greatest of plans. Riding on horseback, with a mounted knight attached to the King’s bridle on either side, John went straight for the English. His brave escorts, who presumably had to duck his blind swings, were found dead along with the King after the battle. 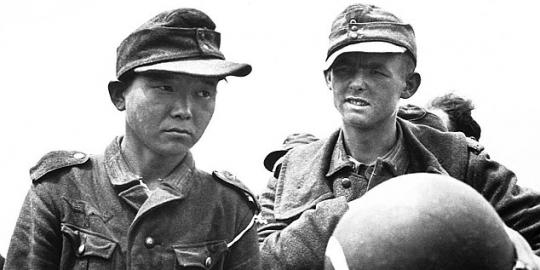 In 1938, 18-year-old Korean Yang Kyoungjong was conscripted into the Imperial Japanese Army to fight the Soviets. A year later, during the Battle of Khalkhin-Gol, Yang was captured by the Red Army and eventually sent to a labor camp. However by 1942, the USSR was engaged in a bloody fight with the advancing German army. With a military strategy that mostly involved sending their own men to die until the enemy ran out of bullets, they needed new bodies constantly. Yang was “convinced,” likely under threat of death, to join the Red Army.

In 1943, he was captured once again, by German soldiers during the battle of Kharkov. With the Soviet strategy working, Germany now also needed bodies and Yang was convinced to join the German army. Yang was later captured for the last time by American forces in June 1944. After becoming a veteran of three armies, he decided against joining another.

1The British Sink Their Own Flagship In fairness to L. Ron Hubbard, the legendary British Navy had an even worse disaster at sea. The HMS Victoria, a battleship of the Royal Navy, began service in 1888 and was destined to be the flagship of the Mediterranean Fleet. Battleships, costing as much as £1.35 million apiece, were not something that Britain could spare. Despite this, they still managed to sink it, even without the help of the enemy. On June 22, 1893, Vice Admiral Sir George Tryon and the 10 battleships of the Mediterranean fleet were heading out to sea. Ordered into two columns, only 1,000 meters (3,300 ft) apart, the Vice Admiral decided to try something quite absurd.

Wanting to put on a show, he ordered the two ships leading the column to turn 180 degrees toward each other and then continue forward to port, with the rest of the column repeating this move. The gap between the ships was far less than the turning circle for either battleship, something which Tryon had failed to calculate in his desire to take the lead in some synchronized sailing. The two insanely expensive battleships inevitably crashed, sinking the Victoria, which had only seen five years of service, and badly damaging the HMS Camperdown. Over half the crew of the Victoria was killed. Rather than face embarrassment, and a rather expensive bill, Tryon decided to go down with the ship.