When Washington Irving’s The Legend of Sleepy Hollow was published in 1820, the world was introduced to the iconic character known as the Headless Horseman. But Irving’s creation echoes a wide range of beings which have haunted our imaginations for centuries. 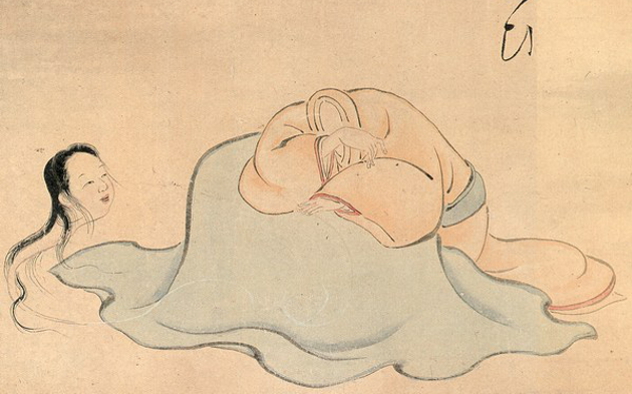 Japanese folklore contains the legend of a vampire-like creature called the nukekubi, meaning “prowling head.” By day, a nukekubi is largely indistinguishable from an ordinary person. At night, however, its head detaches from the neck and flies away. The flying head of the nukekubi preys on mortal flesh: Once it has found its victim, it emits a paralyzing scream before going in for the kill.

Often the nukekubi has no idea what they are. They might only recall dreams of seeing their room from odd angles. To vanquish a nukekubi, you must find its idle body at night and destroy it, thereby also killing the head. There is one way to identify a nukekubi by day: They will have two or three wrinkles along the bottom of their neck. 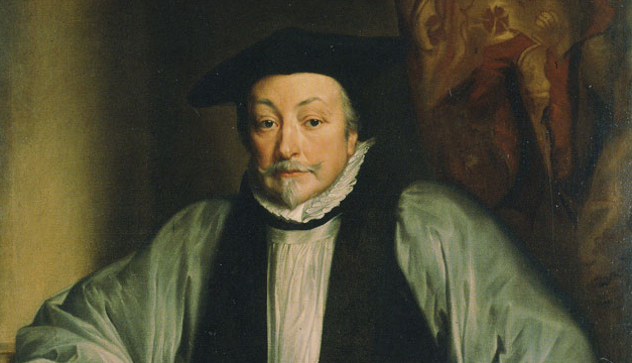 William Laud was Archbishop of Canterbury, the head of the Anglican Church, from 1633 to 1645. This was an era of religious turmoil in England, and William Laud made some fierce enemies: He once had three prominent Puritans’ ears cut off, and their cheeks branded with the letters “SL,” for “Seditious Libeller.” The court jester at the time quipped, “Give praise to the Lord and Laud to the Devil.” Eventually, his enemies gained enough political power to have him arrested and beheaded for subverting Protestantism and alienating the King from his subjects.

Before becoming Archbishop of Canterbury, Laud was the Chancellor of Oxford Univeristy. His gruesome end has become associated with a haunting at the library of St. John’s College in Oxford. At night, it is said, a ghostly figure can be seen walking the building, carrying a candle in his hand as he kicks his own severed head along the floor. This last detail suggests that he has developed a playful side in death: After all, we tend to picture decapitated ghosts carrying their heads under their arms, rather than using them in impromptu soccer matches.

8The Dullahan
The Original Headless Horseman 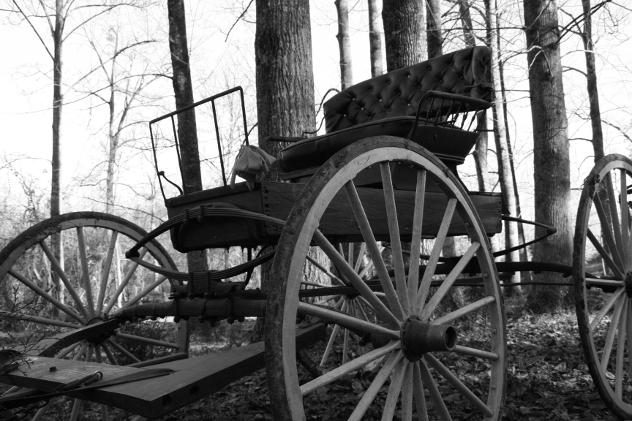 The dullahan of Irish legend is a type of fairy—but it’s a long way from the pretty little winged creatures we imagine today. A headless horseman who travels the land carrying his grinning head in one hand and a whip made from a human spine in the other, the dullahan is an omen of death. If he stops in his travels, it is a sign that someone will shuffle off this mortal coil. In some versions of the tale, the dullahan’s horse is also headless, and he is said to drive a coach containing a coffin, skulls, and lit candles.

As well as being an omen of death, the dullahan presents a direct physical threat, as anyone who sees him risks having their eyes lashed out by the creature’s whip, or a basin of blood tipped over them. However, he is terrified of gold and will disappear if you throw even a single coin at his feet.

No one knows for sure where the legend of the dullahan comes from, but it’s suspected he’s a twisted form of the ancient Celtic god Crom Dubh (“Dark Crooked One”), demonized after the country’s conversion to Catholicism. 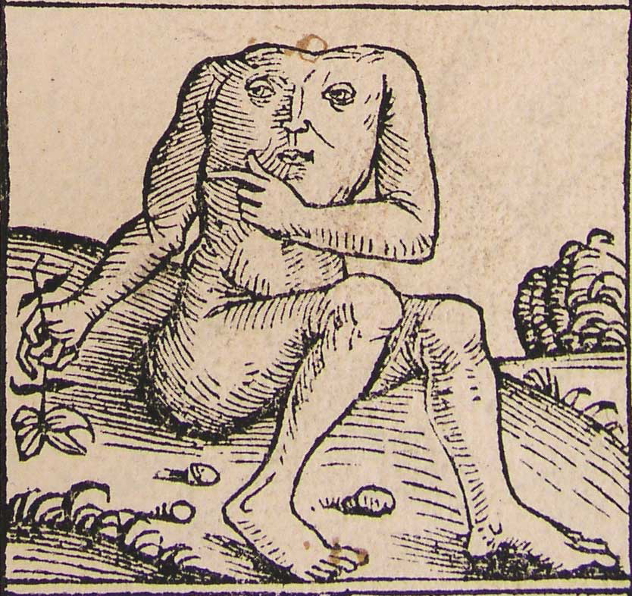 While on his travels, English explorer Sir Walter Raleigh met the son of a local chief who claimed to have been taken captive by a race of headless people called the Ewaipanoma. According to Raleigh, these Ewaipanoma had eyes in their shoulders, mouths in their chests, and long hair growing from between their shoulder blades. They were heavily armed with bows and enormous clubs, and made formidable opponents for any rival tribes.

This tale is very similar to reports of the Blemmyae, a supposed African tribe which likewise had their faces on their chests. According to the Ancient Greeks, they were “eight feet tall and eight feet wide.” The controversial English knight Sir John Mandeville claims to have encountered Blemmyae in the 14th century, and claimed that they share a set of islands with a race of headless men who have their faces on their backs, rather than their chests. Mandeville’s book was very popular for its time although, for obvious reasons, many have questioned whether he actually went on these expeditions.

6 The Drummer Boy Of Edinburgh Castle 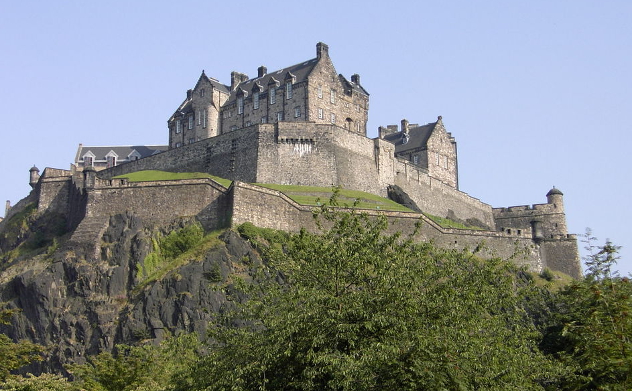 Rumor has it that a mysterious drumming noise can be heard in the walls of Edinburgh Castle. The source of this lonely sound is said to be a phantom drummer boy. According to the story, the boy is seen whenever the castle is under threat, first appearing in 1650 when Oliver Cromwell launched an attack. When he appears, the ghostly drummer boy lacks a head.

Ghostly drummer boys are a recurring motif in legends around the world—for example, one such spirit is said to have been haunting Shiloh in America since the days of the Civil War. However, the headless nature of the ghost of Edinburgh Castle marks him out as something altogether less common—and more eerie. 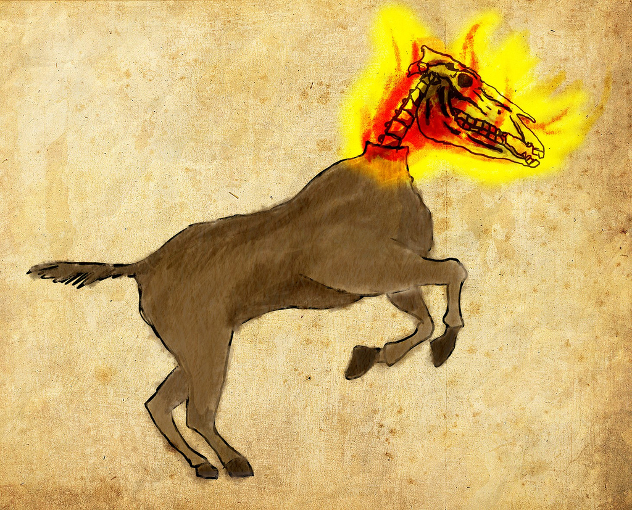 Brazilian folktales tell of a curious being known as the mula sem cabeça, which is the ghost of a woman—but which resembles a headless mule with fire spewing from its neck. The story goes that the beautiful wife of a farmer became the phantom headless mule, doomed to dash across the roads after midnight and then trample anyone who gets in its way. Using a pin to draw blood from the mule will turn it back into a woman, but only while the benefactor lives.

The headless mule is a strange specter and no mistake. Although many will assume that a headless ghost is the spirit of someone who was beheaded in life, in this case the hideous transformation was a punishment for a woman’s sins. It is a figure to be pitied more than feared. 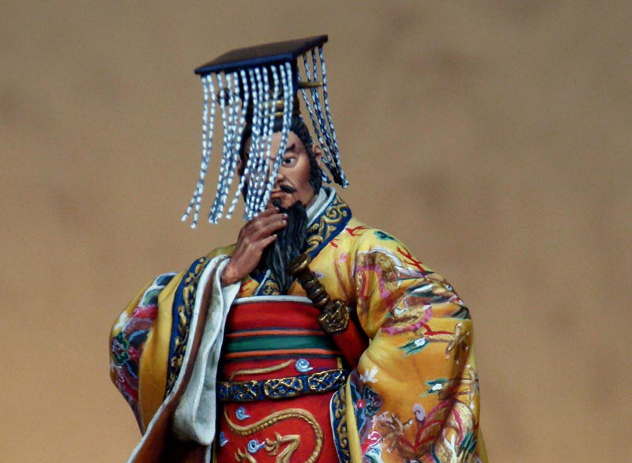 Legendary Chinese ruler Huang Di, known as The Yellow Emperor, once went into battle against a nameless giant. During the fight, Huang Di successfully decapitated the giant, causing the mountains to shake as he fell to the ground. The giant was still alive, however, and began blindly trying to reclaim his severed head. Huang Di cut open the mountainside and rolled the head into it.

When the giant realized his head was gone for good, he concentrated his will and forced himself to see out of his nipples and use his navel as a mouth. He rose again as Xing Tian, “The Headless One,” and continued to fight. He is now widely respected for his undying resolve. 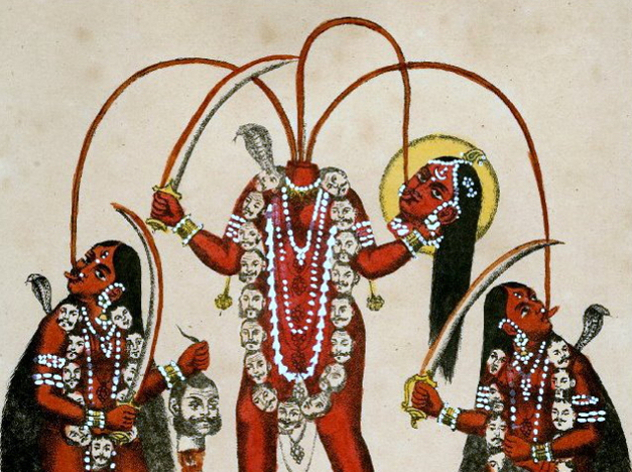 Unlike the others on this list, Chinnamasta is not a ghost or monster at all. She is a goddess in the Hindu pantheon who uses her gory appearance to demonstrate important religious tenets. She is depicted carrying her own severed head on a platter, its mouth open as it swallows the blood which sprays from the stump of her neck. Her devotees are usually nearby, also catching the goddess’s blood in their mouths. The legend goes that Chinnamasta decapitated herself so that she could feed her hungry servants with her own blood.

She stands on top of a couple having sex, demonstrating that sex, life, and death are inextricably linked. Chinnamasta does not have many worshipers due to her intense nature, but some practitioners believe that shocking imagery is the best way to break through mental barriers to the truth. 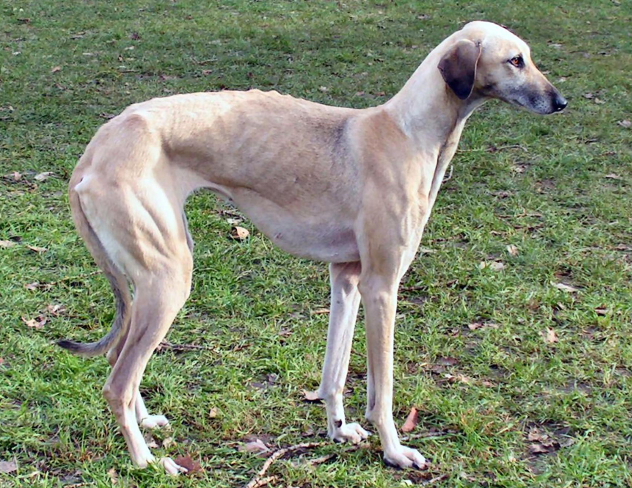 During his persecution of English witches in the 17th century, the infamous witchfinder Matthew Hopkins claimed to have come across familiar spirits with such curious names as “Griezel Greedigutt,” “Pecke in the Crowne,” and “Sacke and Sugar.” Most of these resembled ordinary animals, but the alleged witch Elizabeth Clarke confessed to having a far stranger familiar she called Vinegar Tom, which she fed with her own blood.

Clarke was an old, one-legged widow who lived in Manningtree, Essex. According to Hopkins, her familiar Vinegar Tom initially appeared in the form of a greyhound with the head of an ox, but upon being challenged it shapeshifted into a new guise: a headless four-year-old child. Hopkins claimed that the transformed familiar then ran around in a circle six times before fleeing the house.

1 Ghost Of The Headless Woman Pub 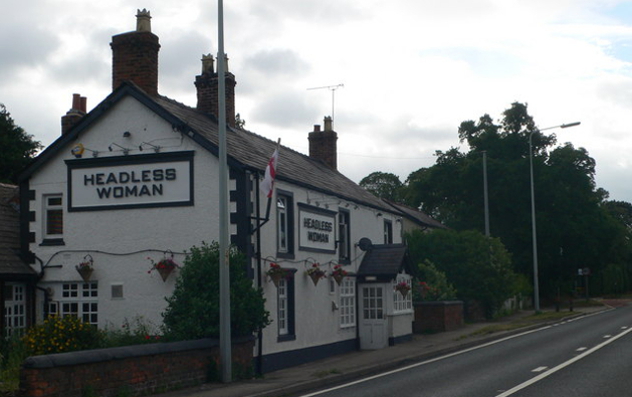 The English town of Duddon is home to a pub named the Headless Woman—and with a name like that, there is bound to be a fascinating story attached to the place. Sure enough, the pub is reputed to be haunted by the headless ghost of Grace Trigg, a woman who was tortured and beheaded by the soldiers of Oliver Cromwell during the English Civil War. Researchers have had trouble verifying this tale, but paranormal phenomena are still reported in the area today.

This is not the only pub whose sign bears the image of a headless woman: There are others, often with names such as the Quiet Woman or the Silent Woman. Skeptics have argued that this is all just a chauvinistic joke, the idea being that the only quiet woman is a woman who has lost her head. The Quiet Woman pub in Earl Sterndale is connected with a very literal version of this joke, as legend has it that one former landlord grew so tired of his wife—nicknamed Chattering Charteris—that he decapitated her. Who knows, perhaps her ghost also haunts the location?