Monsters have always been with us. The oldest stories hint at tales stretching back before the invention of writing. One myth common across Indo-European cultures features a monstrous dragon—and its slaying by a brave hero.

More modern monsters often do not offer us the comfort of showing us how to defeat them. They can also be uncomfortably close to us—even in the United States. Here are 10 contemporary beasts and where to find them. 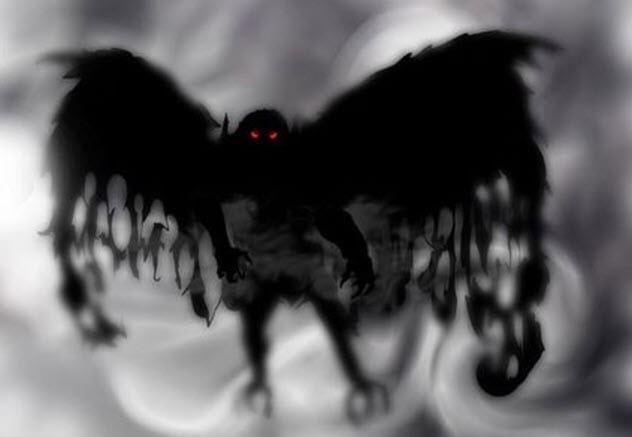 In 1966 in West Virginia, people began to report sightings of a terrifying human figure with wings. Soon dubbed “the Mothman,” this creature appeared to gravediggers, couples out walking, and other groups of people. Even eerier than a flying man was the pair of huge glowing red eyes with which he stared at witnesses. For months, more and more people reported sightings of the Mothman. But they all stopped in December 1967.

On the 15th of that month at Point Pleasant, the Silver Bridge catastrophically failed. A single cracked beam suddenly fractured and sent dozens of cars plummeting into the river below. When the bridge fell, it was full of rush hour traffic and 46 people lost their lives. People immediately connected the appearances of the Mothman to the disaster and saw him as a herald of doom.

Since the Silver Bridge disaster, Mothman has rarely been seen. But there are those who claim to have glimpsed him just before other tragedies. So was Mothman a spectral creature trying to warn people of disaster or, as some researchers think, just a large owl?[1] 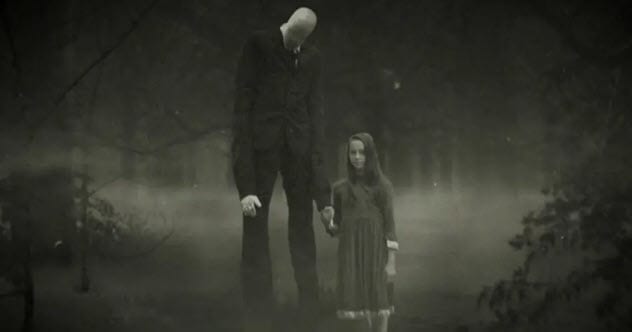 Slender Man may be one of the most horrific things to come from the Internet, and that is up against some stiff competition. Originally birthed from a Photoshop competition in 2009 when users were challenged to create paranormal images, the Slender Man has spread throughout popular culture and even, tragically, into the real world.

A tall, thin, and besuited character, Slender Man appeared in the background of many photos. Soon, a whole backstory and legend became attached to him. He targeted children or drove adults insane. One alleged power of Slender Man is that he can take control of people and force them to do things against their will.

In 2014, two 12-year-old friends held down and stabbed another 12-year-old 19 times. The aggressors told police that this was what they had to do to become proxies of the Slender Man or else he would kill their families.[2]

The two girls told each other that they could see “Slendy” and created a world in their minds where he was real. The girl they attacked survived the ordeal, and the two assailants were sentenced to long periods in mental hospitals. 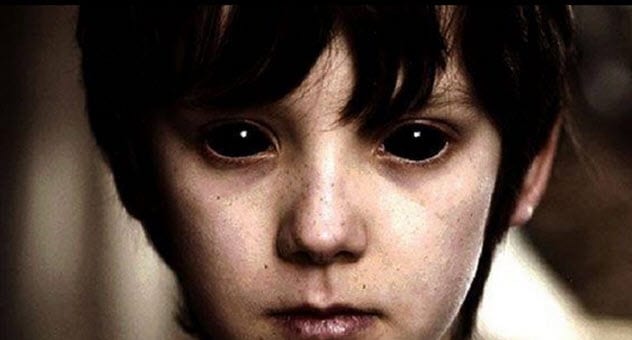 Children can be scary things to some people at the best of times. But when they stare at you with ghostly black eyes, fear is probably an appropriate response. Black-eyed children have been popping up all over the world.

In 1996, a Texas journalist made what is considered one of the earliest sightings. Stopping his car late at night, the reporter was approached by two children who tapped on his window. As soon as he looked at them, he was gripped with terror.[3]

The two asked for a lift to the cinema and became agitated when he would not let them in. When he broke eye contact with them, the children’s eyes turned pure black. Understandably, the journalist drove off rather quickly.

Now black-eyed children have been spotted in many countries. In the UK, they have been seen several times in Cannock Chase. Recently, they have been making an appearance on the London Underground. Perhaps this explains why Londoners are so reluctant to make eye contact with anyone on the morning commute. 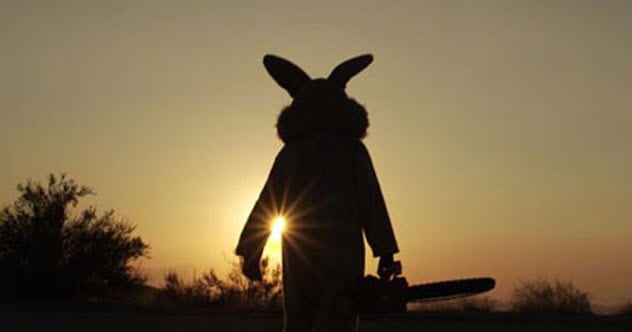 Venture into the woods near Colchester Overpass in Virginia, and you might be in for a big surprise. According to local legend, a former inmate of an insane asylum has made this location his home. But this is not any old madman—he always wears a giant bunny costume.

The tale goes that a 12-year-old boy named Douglas Griffon murdered his parents with an axe at Easter. Locked up for his crimes, all was well until he escaped during a prison transfer. When the police searched for him, all they discovered were mutilated rabbit corpses.

When three teenagers were later killed in the area, a hunt uncovered the axe-wielding Griffon dressed up in a homemade bunny outfit. Before they could capture him, he stepped in front of a train. That should be the end of the story. But rumors persist that Griffon’s spirit—still dressed in his costume—haunts the area.

In fact, people who have looked at the legend of the Bunny Man have concluded that the story above is false. Interestingly, there was a recorded event when a couple was menaced by a man with an axe. He wore a white suit and bunny ears.[4] 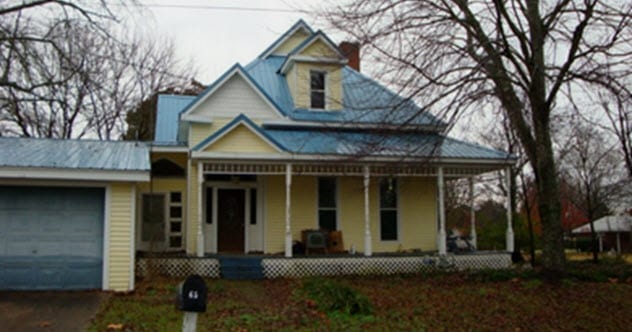 In the Arkansas town of Quitman, many of the houses are supposed to be home to ghosts. Gerald Floyd Bettis was born in one such haunted house in 1954. Apparently, the boy was sufficiently spooky for his home. He developed a mean streak along with unusual habits such as collecting cats and dogs.

This is how he gained the name “Dog Boy.” Gerald was not caring for the animals he found but torturing them instead. Neighbors could hear their screams.

As Gerald grew up, he tormented his parents, forcing them to live only in the upstairs rooms and feeding them only when he decided they needed feeding. He threw his elderly father out a window and beat up his mother. Eventually, Gerald was arrested for his crimes and died of a drug overdose. But Dog Boy was not done with his home.[5]

The new owners of the house have reported coins floating down hallways, lights turning on of their own accord, and spectral apparitions. Due to these “darned spirits,” the house has been difficult to sell.

The Skunk Ape is a creature said to stamp through the swamps of several states. Also known as the “swamp ape” or “swamp cabbage man,” this large humanoid beast carries with it a pungent and repulsive odor—as you might if you spent your life in the swamp. As it is supposed to look somewhat like Bigfoot, many people are searching to capture the Skunk Ape to find out just what it is.

Sightings of the creature tend to occur when hunters spot something moving in the dense plants. Suddenly, a tall and bipedal hairy monster looms up and runs away, leaving nothing but an awful stench in the air.

Given the eyewitness testimony and lack of any physical evidence, most researchers think that the Skunk Ape, if it exists at all, is just a black bear that has rolled around in something nasty.[6]

On the other hand, Dave Shealy is so sure that the Skunk Ape is out there that he has set up a Skunk Ape Research Headquarters in the Florida Everglades. 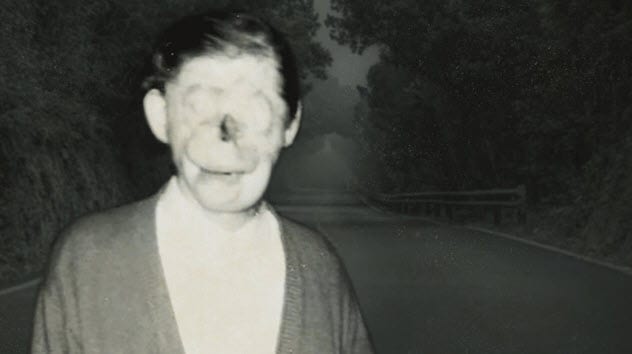 Charlie No-Face may be the saddest case of a modern monster. At night, people would drive down the back roads of Pennsylvania to catch a glimpse of a monster they called the “Green Man,” or “Charlie No-Face.”

In the glare of their headlights, they might see a solitary figure slowly walking up and down the streets with a disfigured face. Shrieking, they would drive off and tell the story of how they came face to no-face with a legendary creature.

The real monsters, though, were the ones in the cars. Charlie No-Face was a man whose real name was Ray. He had suffered a terrible accident as a child when he climbed a pole to reach a bird’s nest. The pole carried a high-current electric wire, and Ray was burned so badly that he lost his nose, eyes, and right arm.[7]

Due to his appearance, Ray preferred to stay inside during the day with his family. But he liked to go for walks at night so that he would not frighten people. Despite the sometimes cruel attention he received from those who came to see Charlie No-Face, Ray refused to let them put him off his nightly strolls. 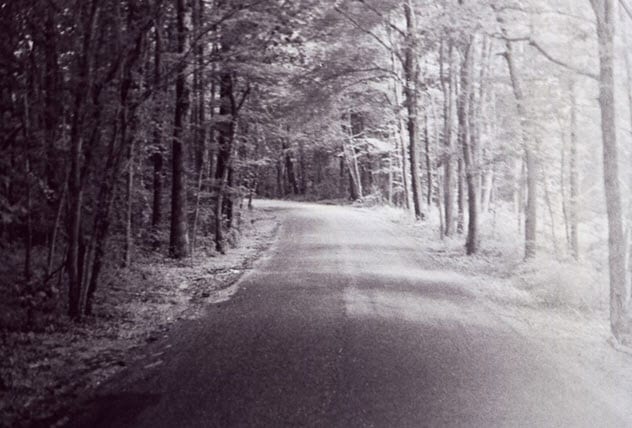 Few things would be scarier than meeting a creature that had the head and legs of a goat but the body of a human. However, the Goatman of Maryland is even more terrifying because he also carries an axe.[8]

According to legend, the monster was created by a scientist who was doing research into . . . whatever mad scientists do with goats. The experiment went wrong, and the researcher was transformed into a half-man, half-goat. Apparently a little distressed by this change, he took out his rage on cars with an axe.

The Goatman legend took off in 1971 when a local dog was found decapitated. Now the Goatman is said to enjoy bleating at people out of the darkness in the woods. He has a particular fondness for haunting places where lovers in cars like to park.

The legend of the Goatman was kept alive by local teens who would use the excuse of “Goatman hunting” to organize drunken parties. Imagine meeting the Goatman when you’re drunk, though.


2 The Three-Legged Lady Of Nash Road 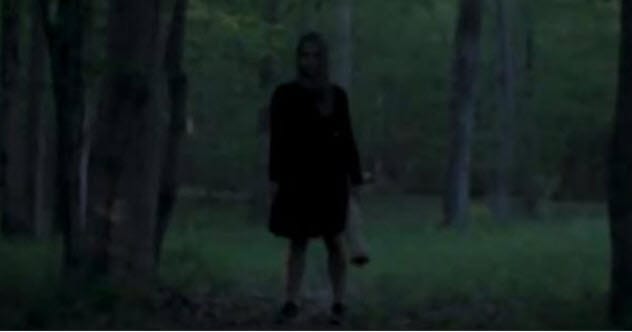 The Three-Legged Lady of Mississippi is a ghost that locals claim will chase you down Nash Road. And racing against a three-legged lady doesn’t sound very fair.

Sources vary, but legend has it that a young girl was kidnapped and murdered in the area. The killers cut up her body and tossed it into the woods. When the girl’s mother went searching for her daughter, all she found was a single leg. Unable to stop searching, she now wanders Nash Road with the decaying leg of her daughter stitched crudely to her body.

Should you want (for some reason) to meet the three-legged lady, you must drive to Nash Road at night, turn off your headlights, and honk your horn three times. The three-legged lady will then tap on the roof of your car. As you drive off, presumably in horror, she will race you along the road, bumping into you all the way. It’s not recorded what happens if you lose the race.[9] 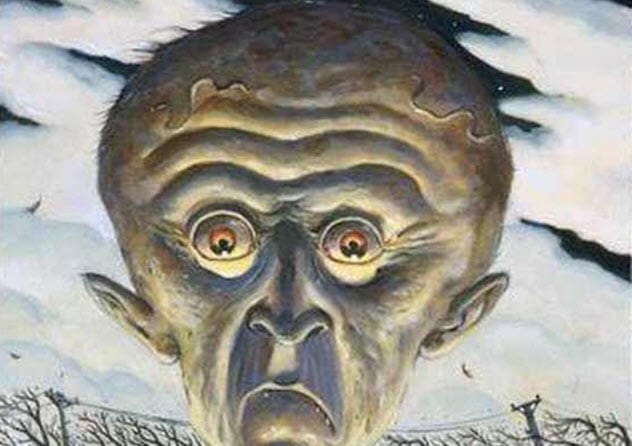 In Michigan, Ohio, and Connecticut, people have reported sightings and attacks by small humanoids with grotesquely swollen heads. The Melon Heads, as they are known, are often associated with legends of people locked up in asylums.

In Ohio, the Melon Heads are said to be cannibals who stalk rural places. With shriveled bodies but massive heads, these pale creatures surprise the unwary and attack them with their pointed teeth. Local tales describe how the Melon Heads were taken in as children by a demented scientist called Dr. Crow.

Through his experiments on them, they became twisted. When they escaped or were let loose, they thrived and waited in lonely places to capture their victims.[10]

In Michigan, the Melon Heads were children suffering from hydrocephalus, a real condition that can cause the head to swell immensely. After being abused, they escaped from the hospital where they were being held and became feral in the wild. Of course, there is no evidence for the Melon Heads’ existence. But there never is any evidence—until there is.

Read more frightening facts about freaky modern monsters on 10 Folklore Monsters That Persist In The Modern Age and 10 Japanese Monsters That Will Kill You.