Getting your first piercing or tattoo is a rite of passage for many young people. The buzz of being rebellious is something we all want to experience in those tearaway years. But some feel the pinch of the needle or see the bruise on the flesh and realize it was their calling in life to decorate their bodies to the point of excess. The following folk have dedicated their lives to looking different from the rest of us . . . in the most extreme way possible. 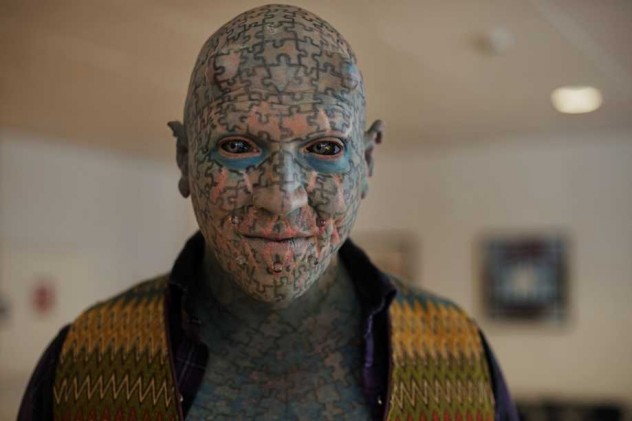 Whether Paul Lawrence is a fan of jigsaw puzzles is unknown, but one look at him and you would probably hazard a guess that he is. The sword swallower, who is no stranger to pushing an electric drill up his nostril, is covered in blue puzzle pieces. Enigma’s tats are the work of over 200 tattoo artists. At one point he had 23 working on him at the same time.

The Enigma is also a bit of a media star, having appeared on The X-Files and Penn & Teller. His stage shows include a stunt called “The Kiss of Death,” where he places an apple in his mouth and cuts off the end with a chainsaw; lighting his partner’s cigarette with power tools; and sticking a needle in his eye.

Zombies are perhaps more in vogue now than they’ve ever been; every summer there seems to be another wave of the living dead hitting the big screen. But Rick Genest doesn’t have to wait until the warmer months to catch sight of a zombie. All he has to do is look in the mirror. Genest has spent over $4,000 Canadian dollars on tattoos. He can also conceal all his tats, as demonstrated in the amazing video above (skip to about 1:30 to see the transformation).

Genest comes from Quebec, and he got his first ink age 16. After he left home and met Montreal artist Frank Lewis, his zombie vision took off—and six years later he’d become the Zombie Boy. At first glance, the tats seem to resemble a skeleton, but a closer look reveals a decomposing body and an infestation of insects to boot. 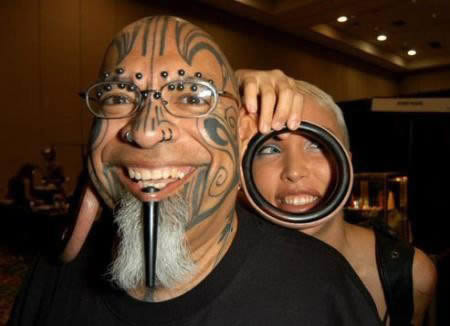 Daryl Belmares has massive ears. Well, that’s not technically true. He has massive ear-lobes. They’re so big, he can literally wrap them around his face. Belmares has made it his mission to see how far he can stretch the saggy bit of skin most of us find no use for. The pastor’s ears have 14-centimeter (5.5 inch) holes in them, making them the world’s largest stretched earlobes.

Belmares has been a professional body piercer for the best part of 30 years. He sees his trade as spiritual and argues that the role of the piercer is similar to that of a shaman in other cultures. 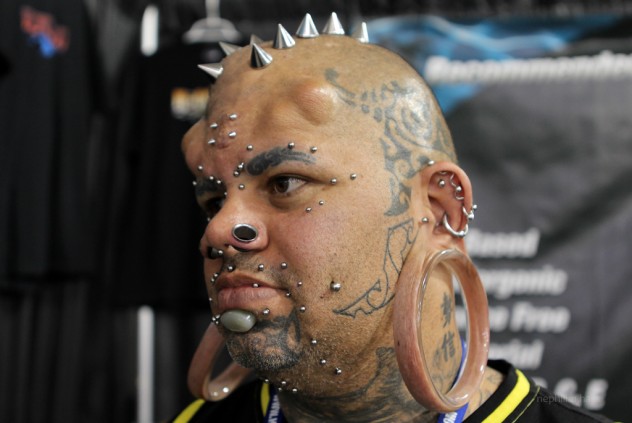 Kala Kaiwi certainly looks mutated, but his face is all man-made. Kaiwi has 75 percent of his body covered in tattoos, a split tongue, 70-odd piercings, numerous silicon implants in his face, and stretched ear-lobes and nostrils. That’s all pretty run of the mill for the people on this list, but Kaiwi took it one step further. He’s also got metal spikes screwed into the top of his skull.

Kaiwi was inspired to look the way he does by his strong connection with his indigenous Hawaiian culture. He’s certainly dedicated to the look: The stainless steel spikes he uses are his own brand. Oh and one more thing—he did all his piercings himself. 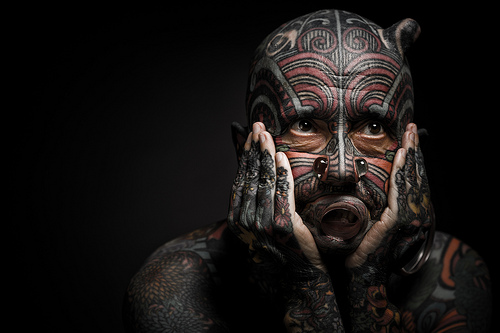 When we think of art critics, we often think of studious eyes behind trendy spectacles or a neat little suit and tie studying a brand new artist’s exhibition while brandishing a glass of champers. Very rarely would we imagine a man like Etienne Dumont. Dumont, from Geneva, is completely covered in tattoos, has silicon implants like horns on his forehead, big rings in each earlobe, and Plexiglas piercings through his lips and nose.

To justify his reputation as “Living Art,” the 60-year-old Dumont had his own photography exhibition in 2009 in the Krisal gallery in Geneva. He had his first tattoo in 1974, but unlike others on this list Dumont has stated that his tattoos aren’t anything spiritual, he simply finds them “amusing.” 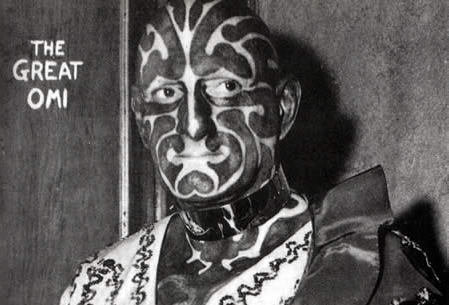 Horace Ridler was a professional freak and sideshow performer. Performing as The Great Omi or The Zebra Man, Horace easily stood out, tattooed as he was from head to toe in black and white stripes. To accentuate his tats, Ridler wore black lipstick and nail polish.

But Ridler wasn’t always that way. Before his death in 1969, Ridler explained, “underneath it all, I’m just an ordinary man,” although his past as a World War I hero (he was decorated for outstanding conduct and gallantry in Mesopotamia) would suggest he was always destined to stand out from the crowd. 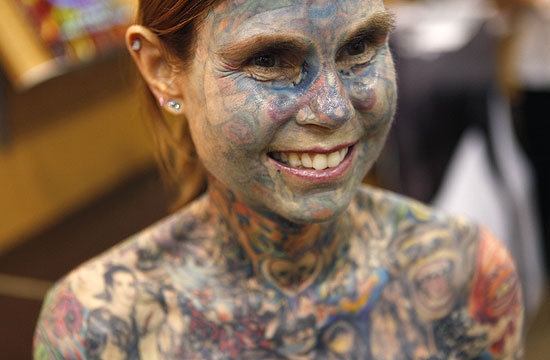 Julia Gnuse was born different. She suffers from a rare condition called porphyria, which basically means that her skin easily blisters in sunlight, leading to scarring. Believe it or not, it was actually Gnuse’s doctor who recommended that she look into getting some body art done—particularly with ink which matched the color of her scars. Gnuse obviously agreed, but what started as a medical solution soon became a bit of an obsession.

By the age of 55, an incredible 95 percent of Gnuse’s body was covered in ink, earning her a spot in the Guinness World Record books as the World’s Most Tattooed Woman. 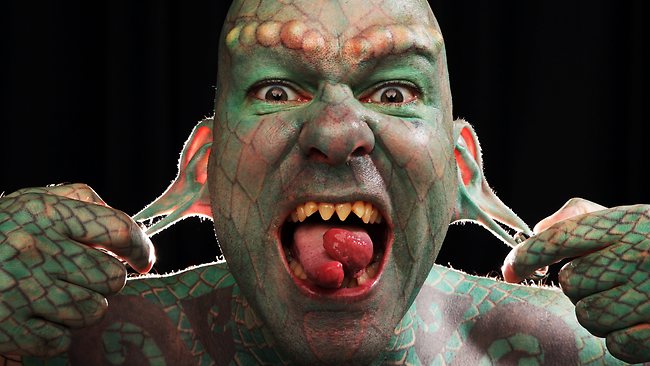 If you had to pick an animal to look like, what animal would you choose? Eric Sprague had certainly asked himself this question—and he knew the answer. The man from Austin, Texas went and had his tongue split in two (one of the first people to do so) and underwent a mere 700 hours of tattooing.

He also had his teeth sharpened to fangs, his lips dyed green, and his septum and earlobes stretched. When he’s not basking on a rock, Sprague is a modern day freak show performer, showing off his fire-eating and sword-swallowing skills all over the world. 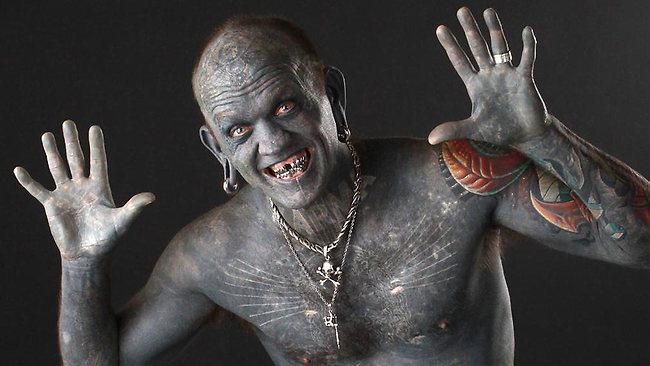 Lucky Diamond Rich has spent over 1,000 hours in the tattoo chair. That’s roughly 40 days. But Gregory Paul McLaren is a dedicated man. The New Zealander is totally covered in tats—and that includes his eyelids, the skin between his toes, his ears, and even his gums. He’s also had all of his natural teeth replaced with new shiny silver ones.

Not content with covering 100 percent of his body in ink, he is now embarking on getting the black tattoos covered in white tattoos. When he’s away from the inker’s chair (and the dentist’s chair for that matter), Rich can be found juggling chainsaws and swallowing swords. As of 2006, McLaren is the official World’s Most Tattooed Person. 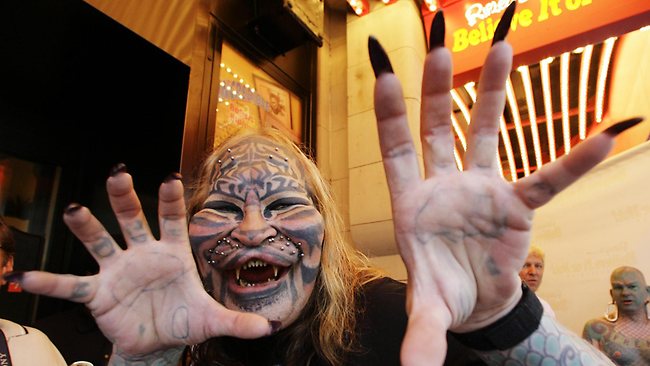 Are you a cat or a dog person? Dennis Avner was most certainly the former. The Native American, also known as Stalking Cat, took his allegiance to his totem animal, the tiger, to the extreme. Avner had extensive tattooing, numerous piercings, implants which allowed him to “wear” whiskers, more implants to change the shape of the face, his ears surgically pointed, and his teeth sharpened—all for the love of cats.

By all accounts, Avner was a pretty amiable chap. Whereas other modified folks do sideshows and freak show tours, Avner kept up his day job as a computer programmer. One of the most visually arresting people on the planet, the US Navy veteran was tragically found dead in his Nevada home in November 2012.