What happens when we die? It’s a question that has long haunted mankind, and while it seems unlikely to be definitely answered anytime soon, different cultures have always found their own ways of explaining where a person’s essence goes when their body ceases to function. And for many, the door to the afterlife was very, very close. 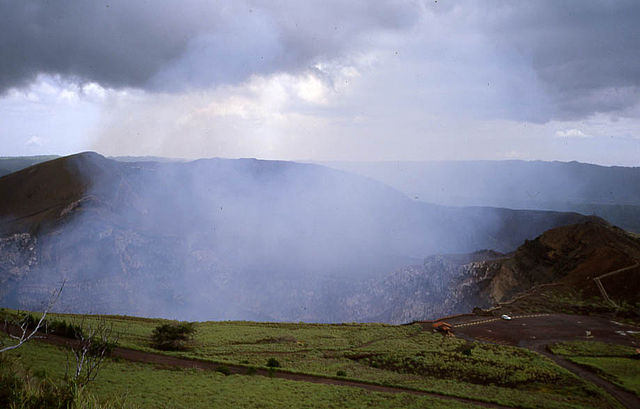 Letters from 16th century explorers in the New World told of great volcanoes that turned the night into day and lakes of fire that never stopped burning. Those brave enough to climb the Masaya Volcano described fire, smoke, and a seemingly endless abyss beyond the crater mouth. It’s easy to see why they started referring to the volcano as the Mouth of Hell. And European explorers weren’t the only ones to think that. For generations, the native people believed that the volcano was one of the forms of a god, and volcanic activity was a sure sign that he needed to be appeased. Young women and even children were thrown into the volcano as sacrifices, a practice oddly termed “fetching water.”

The volcano was also supposed to be the home of a powerful sorceress who was consulted on only the most important matters. The description of both the sorceress and the deity were so similar to the European’s ideas of what the Devil looks like, that it seemed obvious they were one and the same. Interestingly, the volcano and the beliefs surrounding it also spawned a discourse from Friar Juan de Torquemada, in which he cited the corporeal existence of volcanoes as reason why they could not be Hell or the entrance to it. 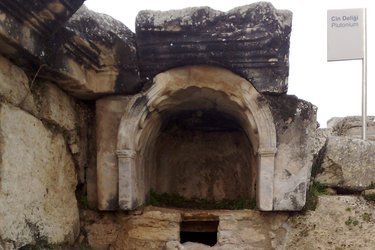 Greek and Roman mythology is a somewhat strange mix of the corporeal and the incorporeal—after all, Mount Olympus, home of the gods, is a real place, so why shouldn’t the gateway to Hades be real? Legend says that Pluto’s Gate, also known as the Ploutonion at Hierapolis, is the entrance to the Greco-Roman underworld.

Long unknown, the site of the cave has been found in Pamukkale, once the ancient city of Hierapolis, which is also the home of breathtaking hot springs and the reputed burial site of St. Philip. Located in an ancient temple where pilgrims sought visions and prophecies, the gate was supposed to be protected by toxic fumes, which would kill any non-priest who tried to enter. An inscription at the mouth of the cave refers to this legend. The deadly fumes are still there, carbon dioxide gases that kill living creatures that get too close. 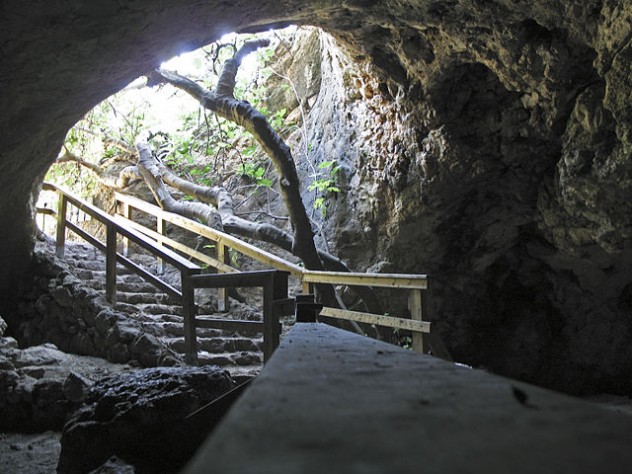 Of all the religious traditions and stories that Israel and Jerusalem are associated with, perhaps the least well-known is their connection to Hades, Persephone, and Demeter. As the story goes, Hades fell in love with the beautiful Persephone, daughter of the harvest goddess Demeter, who he kidnapped and took to the underworld. Before her mother could find her, Persephone ate the seeds of the pomegranate and was forever bound to the underworld. She would spend three months with Hades (during which time Demeter grieved and winter fell) and the rest of the year on the surface with her mother. Caves were long thought to be entrances to the underworld, and archaeological discoveries in the Judean Hills’ Twins Cave show that it was the site of numerous pagan rituals. Roman lanterns, placed to help guide Demeter to the underworld in her search for her daughter, were found throughout the cavern. 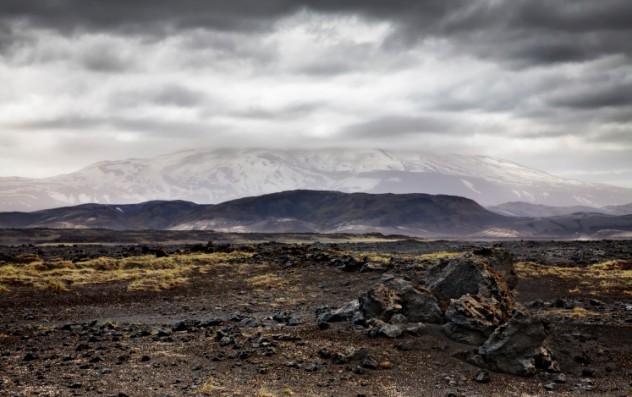 The very active Icelandic volcano Hekla has been cited as an entrance to the underworld ever since violent eruptions began in 1104. Five kilometers (3.1 mi) long and seated on a 40 kilometer (25 mi) wide volcanic fissure, Hekla was once said to be spitting hellfire and spirits back onto the Earth. Close to populated areas, Hekla didn’t just bring fire down onto the surrounding landscape. It also caused countless deaths, violent earthquakes, and devastating famines even in the years after an eruption. So it’s not hard to see why people thought it was a gateway to Hell.

Balls of fire and lava that hissed as they hit the cold Icelandic air created the sound of the damned screaming in agony, and it was the perfect place for witches to meet and cast their evil spells. Uneven, deadly terrain was said to have been created by a war between the immortals. Even William Blake has immortalized the dark side of Hekla in his poem To Winter. Hekla is the site to which the monstrous Winter is driven, banished along with his storms and long, dark days. 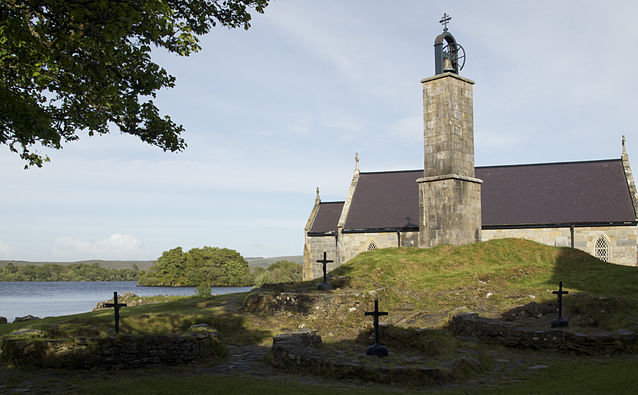 The story of St. Patrick’s Purgatory centers around Station Island on Lough Derg in the county of Donegal. The story goes that St. Patrick was preaching on the island and was met with overwhelming skepticism from the locals. He turned to prayer, asking how he could get the stubborn islanders to see the truth of his sermons. In response, Christ appeared to him and opened up a gateway to purgatory. A single man was sent into the long, deep pit, where he saw what waited for non-believers as they paid their dues in Purgatory. In other versions of the story, St. Patrick himself experienced the vision of the afterlife, and was also given a book and the staff that is traditionally associated with him. The cave said to be the gateway has long been sealed off and shut to the public, but there are still regular pilgrimages to the island. 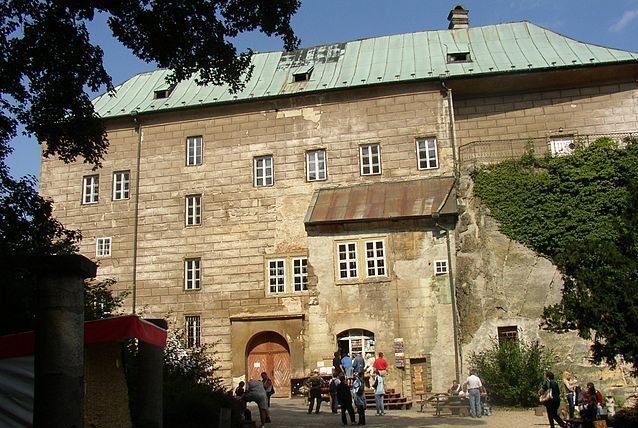 Houska Castle is a 13th century castle in the Czech Republic. While most construction projects have a logical explanation for their location, Houska Castle sits in a place that gives it no strategic value, no access to goods or resources, and isn’t even near a water source. It’s also rather oddly designed, with few outer defenses and many, many more features that appear to be constructed to keep something inside.

Legend says that the castle was built over a pit into Hell itself. Locals have long been said to be witness to strange, flying creatures and long lines of tormented souls chained together and begging for mercy. At one point, criminals were offered a pardon in return for being lowered into the pit to figure out just where it went—a project that was as inconclusive as it was short-lived. Once the castle was built, stories of strange noises, screams, and apparitions of otherworldly monks continued. The castle was also occupied by the Nazis during World War II, amid claims of hellish experiments and transgressions. Now little more than a slab of pavement and whispered stories, Lacus Curtius was once a deep chasm with several similarly-themed stories associated with it. One says that when an oracle told of the looming fall of Rome, the chasm to the underworld opened in preparation to receive a sacrifice. That sacrifice was one of Rome’s finest warriors, a man named Marcus Curtius. He gave the chasm his name when he rode into it, giving his life to appease the gods and prevent the fall of his country.

A different account credits another family member with giving the pit its name. In this story, Mettius Curtius fell into the chasm during the battle that followed the Rape of the Sabine Women. 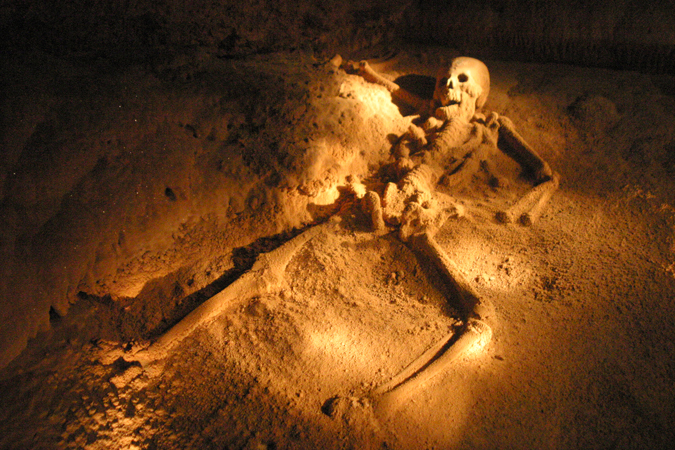 A series of caves in the Tapir Mountain Nature Reserve in Belize, Actun Tunichil Muknal, or the Cave of the Crystal Sepulcher, has long been used for ceremonial rituals by the Mayans. Now open to tours, visitors can see the skeletal remains of human sacrifices that range in age from infants to middle-aged adults. Some of the skeletons have been there for roughly 1,200 years, and the unique environment of the caves means that some have even become covered in fine crystals. The caves themselves were thought to be the home of Chaak, the Rain God.

Further into the caverns, the Mayans believed there were entrances to Xibalba, or the Place of Fear. Xibalba was the underground home of 12 demons and their minions, who were responsible for death, disease, starvation, pain, and poverty. Some of them were oddly specific, such as Ahalmez, who used unswept areas of a person’s floor as a gateway to enter their house and stab them. The Mayans performed human sacrifices in the caves to keep the gods happy—and contained. 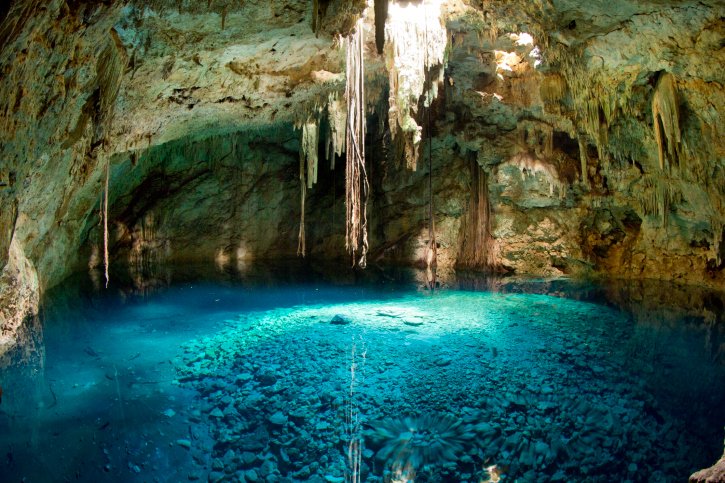 The Sacred Cenotes are a series of wells in Mexico that were used by the Mayans for a number of purposes. They were firstly a solar timekeeper—on May 23 and July 19, the sun casts no shadow in the wells when at its highest point. Beyond the well stretch underground caves, where archaeologists have found remnants of offerings, including human and animal bones and intricate carvings of animals sacred to the Mayan. Similar to the cave systems in Belize, the Sacred Cenotes of Mexico were also believed to be the domain of Chaak, and contained the clay jars he would break to release the rains. Leaving offerings in the caves—the home of the rain—helped to ensure the success of crops and the continuation of a very delicate cycle of life. Days when the sun was at its zenith and the cenotes were filled with bright, shadowless light, were cause for celebrations and dancing at the doorstep to the underworld.

Lake Avernus in Italy has long been mythologized as a gateway to the underworld. With the Greek expansion into the territories that are now Italy, the lake was on the edge of their world and therefore closest to the underworld. Its distinctively dark appearance, with its dead volcanic craters, still waters, deep caverns, and occasional gas-spitting fissures, made it completely believable that visitors would see Hades striding through and disappearing back into his domain. Birds and other small animals give the lake a wide berth, or fell dead from its toxic emissions.

Mentioned by Virgil as the gateway to hell and visited by figures like Heracles and Odysseus, caves around the lake also lead to deep tunnels and the homes of oracles. Cicero makes mention of otherworldly activity such as ghosts around the lake, but so shrouded in mystery was the presence of the oracle that there are no accounts of anyone actually consulting with her. Subterranean lakes were said to be the sites of necromancy, and the caverns were thought to allow dreams and nightmares alike to pass from the realm of the dead to visit the living in their sleep.

Debra currently lives in New York with dogs, cats, and a bucket list that includes visiting all 10 of these places.