The buildings and structures left behind from ages past have astounded history buffs for centuries. From the Parthenon to the Great Pyramid, there never seems to be an end to the multitude of information we can gain from them. But often, that which can be observed above the ground pales in comparison to the extraordinary finds that have been discovered underneath our feet. Whether it be ancient reservoirs, theaters, temples, or disguised strongholds, these monumental subterranean structures serve as a continuing legacy of the ancient world’s remarkable ingenuity.

The pre-Colombian pilgrimage center of Chavin de Huàntar covers an area of around 12,000 square meters (130,000 sq ft). Consisting of artificial terraces and squares, coated stone buildings, and a sunken plaza, its impressive appearance authenticates the site’s ceremonial and cultural importance in the ancient Andean religious sphere.

The site’s essence however, lies in the three stories of subterranean tunnels, ventilating shafts, chambers, and stone-lined galleries. It’s here that you can see engraved obelisks and sculptures in situ, as well as marvel at the enormous scale of the site’s masonry. In fact, the network of drains and vents present inside the site’s core is unparalleled in all of South America’s subterranean archaeological sites and leaves Chavin de Huàntar without equal. 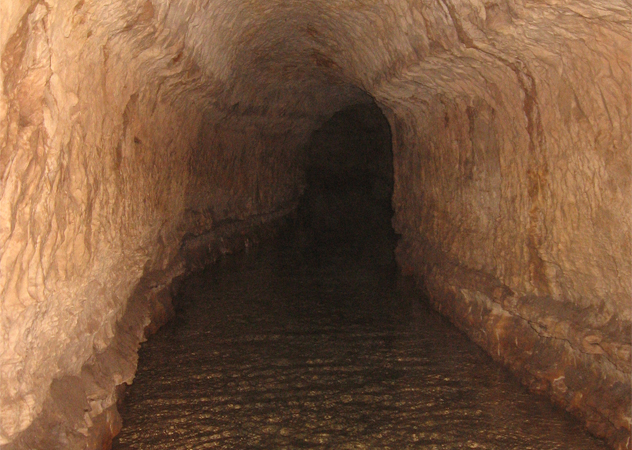 The Qanat Firaun, or Gadara Aqueduct, is the ancient aqueduct that supplied water to the Roman-Hellenistic Decapolis cities of Adraa, Abila, and Gadara. Only rediscovered in 2004, the 170 kilometer (105.6 mi) pipeline is not only the longest underground aqueduct of antiquity, but also the most complex.

It was constructed in the qanat manner—with vertical shafts every 20 to 200 meters (65–650 ft) connected from opposite sides by a multitude of tunnels. It took hundreds of miners over 120 years to complete the tunnel, during which time they excavated over 600,000 cubic meters (21,200,000 cu ft) of limestone, comparable to more than a full quarter of the Great Pyramid’s total volume.

8 The Mithraeum At The Baths Of Caracalla
Rome, Italy 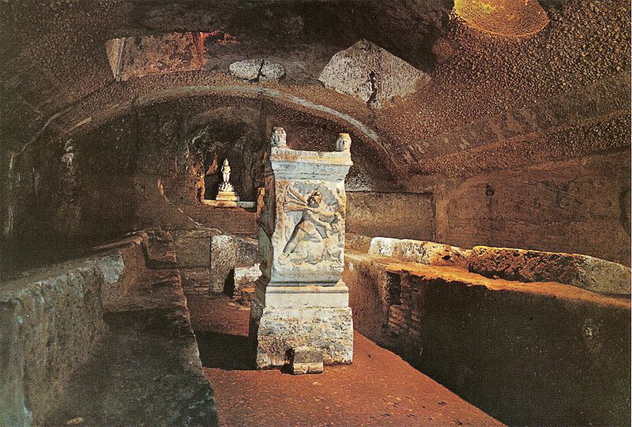 Mithraeums were the underground worship centers for the Roman Mithraic cult, a religious movement that revolved around the Persian god Mithra. During excavations at the Baths of Caracalla in 1912, archaeologists uncovered the largest Mithraeum found to date, which measured 230 square meters (2,475 sq ft).

Unfortunately, most of the artwork inside the great hall was lost to time, but a few relief carvings and inscriptions survived. One of its most significant remaining features is the fossa sanguinis, a deep hole into which initiates were lowered to be baptized by the blood of a sacrificed bull. 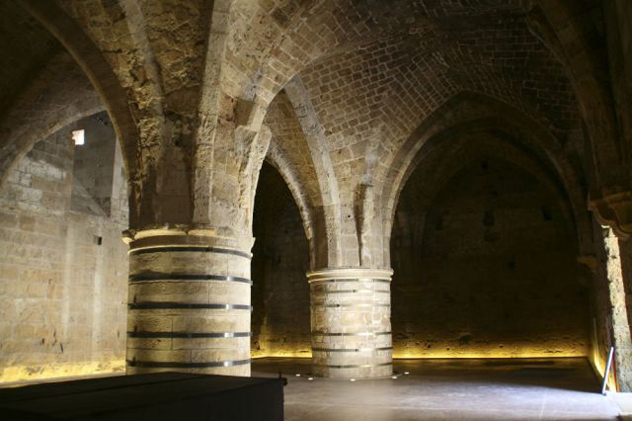 The Knights’ Halls were built by the Hospitaller Knights, a monastic order who devoted themselves to caring for the injured and ill during the First Crusade. Cleverly engineered underneath the castle and prison of Acre—the port city and entrance to the Holy Land—the complex of halls all form part of the Hospitaller’s citadel.

The structure includes a dungeon, an ancient Gothic church, several conjoined halls, and a dining room. Although the site was mostly destroyed by the invading Muslim armies after the Crusaders’ defeat in 1187, it was rebuilt during the Second Crusade. Consisting of three floors, to date only 5,000 square meters (53,819 sq ft) of the archaeological marvel has been excavated. 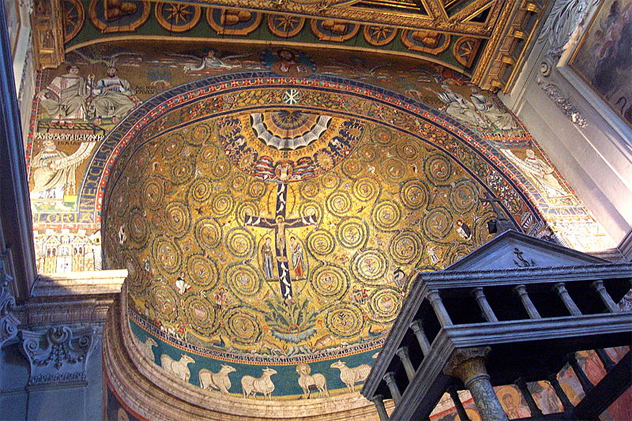 From the outside, the small Basilica dedicated to Pope St. Clement in A.D. 99 may seem insignificant, but on closer inspection you realize that it is an unvarnished, layered representation of Rome’s religious history. Immediately below the beautifully decorated 12th-century Basilica, we find the lower church, or lower Basilica. This is a fourth-century church built partly on top of what historians believe was the home of a Roman nobleman.

Apart from being the site of the papal conclave in 1099, it also contains one of the largest collections of early medieval frescoes in Rome today. Beneath the lower Basilica are the remains of a building destroyed by the great fire of A.D. 64, as well as a Mithraeum containing several monuments used by the cult of Mithra. 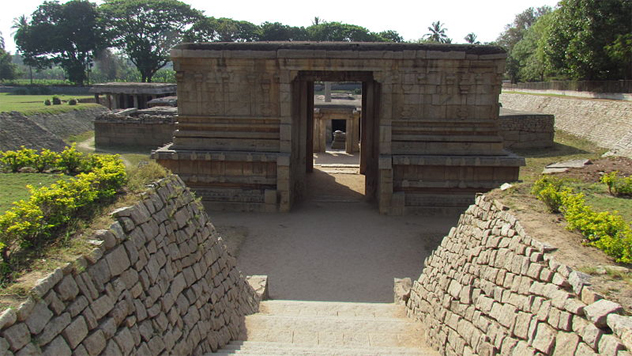 Amid the mesmerizing ruins of Hampi, a World Heritage Site, the Prasanna Virupaksha Temple—also known as the Underground Shiva Temple—lay buried for over 400 years before it was rediscovered in the 1980s. Believed to have been used by the royal household during private ceremonies, the temple is similar in design and layout to the temples located on Hermakuta Hill, and features a variety of carvings, sculptures, and murals.

The grand inner sanctum includes an impressive pillared hall and beautifully carved columns that actually extend through the roof. The floors of the hall—as well as the inner sanctum—remain underwater despite excavations and ongoing attempts to preserve the site. 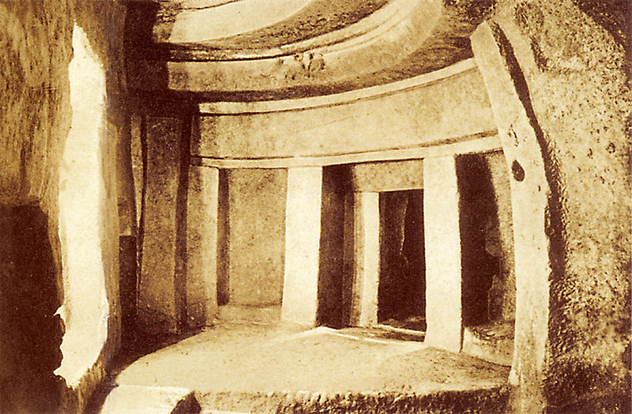 The Hal Saflieni Hypogeum dates back to around 2500 B.C., making it the only known prehistoric subterranean structure in the world. Although many believe it started out as a sanctuary, it also served as a necropolis, and thousands of human remains have been located within its mysterious chambers. One of its most significant features is the Oracle Room—a carved hole in the wall which produces an echo that reverberates throughout the Hypogeum whenever someone speaks into it.

Several smaller chambers throughout its three levels pick up these echoes and turn the reverberations into something that sounds a lot like a heartbeat, leading many to speculate that the hole played a major part in the ancients’ ceremonies. Other features include its unique formation in relation to the equinoctial sun, massive carved stone formations not unlike those found at Stonehenge and Baalbek, and an elaborately painted ceiling displaying ocher spirals. 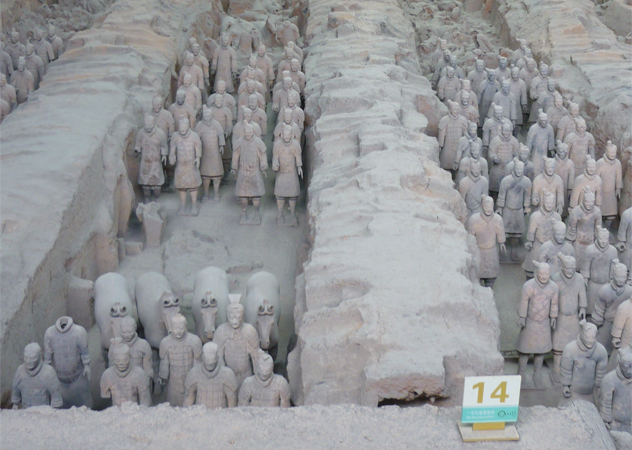 The Qin Shi Huang Mausoleum is the 2,200-year-old burial site of China’s first Qin emperor. Most famous for its partly excavated terracotta army which lies to the north and south of the mound, many foreigners do not grasp that the mausoleum is in fact China’s most extravagant tomb complex. The complex consists of four layers and includes an underground palace, an inner city, an outer city, and a wide variety of subordinate buildings and tombs.

The subterranean phenomenon, which stretches more than 600 square meters (6,500 sq ft), took over 700,000 laborers more than 38 years to build, and in the four decades archaeologists have been excavating the site, they’ve barely begun to scratch the surface. Even though nobody has yet been allowed to excavate the central tomb housing the underground palace, we know from ancient records that it symbolized the emperor’s real palace while he was alive and that it occupies more than two-thirds of the inner city.

2 Tomb Of Seti I
Abydos, Egypt 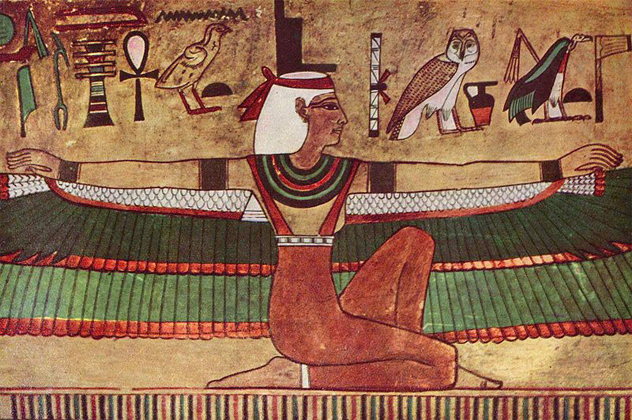 The Tomb of Seti I is the longest and deepest of the tombs in Egypt’s Valley of the Kings. The first tomb to be artistically adorned and decorated, it features exquisite reliefs, colorful paintings, and an intricately carved column depicting Seti I with the goddess Hathor. In fact, every single chamber, roof, and passageway in the tomb was decorated, setting a precedent for the tombs of all the kings to come. Unfortunately, since excavations during the ’50s and ’60s caused changes in the tomb’s moisture levels, a number of the walls have cracked or collapsed, and the tomb is now mostly closed to the public. 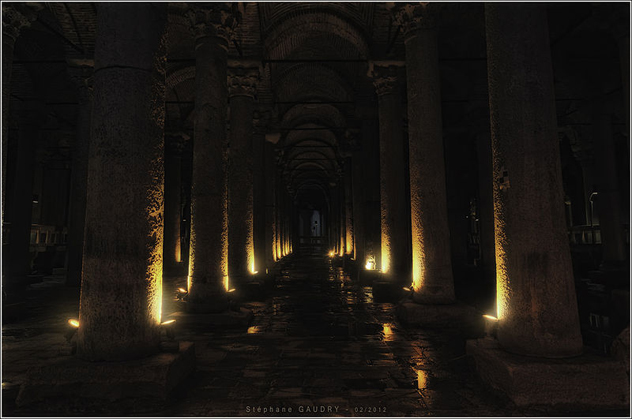 The Basilica Cistern‘s name might imply that it’s nothing more than an ancient water reservoir, but nothing could be further from the truth. During the third and fourth centuries, a spectacular temple surrounded by magnificent gardens stood in its place. When that was destroyed by fire, Emperor Justinian had 7,000 slaves rebuild the original structure on the very same ground—all 9,800 square meters (105,500 sq ft) of it. Also known as the Sunken Palace, it is a wonder to behold.

The Cistern’s arched ceiling is supported by 336 engraved marble columns—each of them 9 meters (30 ft) tall—which you can reach by descending down a flight of stone steps. While operational, the Cistern supplied water to the buildings on the First Hill, including the Great Palace of Constantinople, and continued to do so into modern times. Today, only a few feet of water remain. It has been the subject of several films, novels, and, most recently, a video game.

Hestie Barnard Gerber is a freelance writer, copy editor, researcher and graphic designer. Born and raised in the culturally diverse and beautiful South Africa, her interests lie at the intersection of African history and archaeology, cultural studies, European arts and culture and ecotourism.