Around 5 percent of you likely suffer from acrophobia, the irrational fear of heights. The rest of us are at least a little cautious—after all, falling can be pretty dangerous. Yet as a species we still seek to build things in places where looking up or down is likely to make us giddy. Throughout history we’ve put everything from art to towns on the sides of cliffs and mountains. 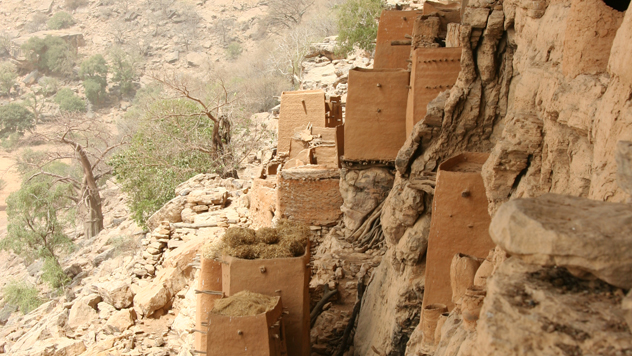 The Bandiagra Escarpment cliff settlement in Mali is has been home to the Dogon people since the 15th century, and the area had been settled for over a millennium before they arrived. By building their settlements on cliff faces, the Dogon protected themselves from invaders and maintained their traditional culture.

Sadly, the culture that fostered the precarious stone settlements is taking a battering from the tourist industry. A huge majority of Mali’s visitors go to see the Dogon settlements, and many local artifacts are taken sold for profit. Economic and environmental pressures are now driving the native settlers away from their steep dwellings to the nearby plains below.

In Nepal, nestled near the Himalayas, is a gorge that in parts dwarfs the Grand Canyon. The cliff walls contain more than 10,000 caves, many of them nearly 50 meters (over 150 ft) from the ground. They are around 800 years old, some are stacked eight or nine stories high, and they can only be reached by scaling the fragile rock face with mountaineering equipment.

The caves once belonged to the Mustang civilization and were a bustling settlement on the trade route between Tibet and India. The Mustang were scholars, artists, and clearly talented diggers, and they flourished for centuries.

No one knows why the caves were built or how they were accessed—any steps, ropes, or scaffolding have failed to survive the passage of time. Yet explorers have found intricately painted Buddhist murals, ancient texts, and skeletons, suggesting the caves were used for religious reasons. The caves have also contained manuscripts from Bön, the Tibetan religion that dominated before Buddhism. 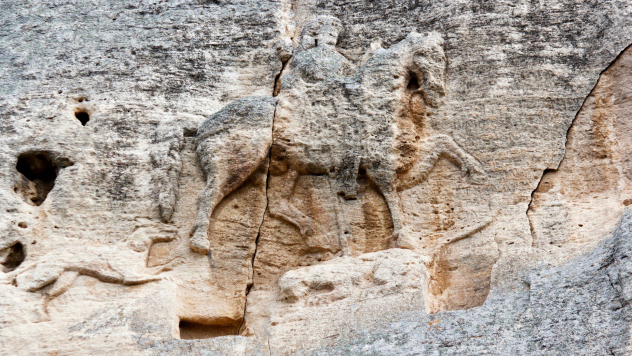 On a sheer cliff in Bulgaria, 23 meters (75 ft) above the ground, is a carving of rider and dog spearing a lion. UNESCO describes it as the only relief of its kind and lists it as a world heritage site. It dates from the start of the 8th century, representing the recognition of Bulgaria by the Byzantine Empire.

The entire cliff is 100 meters (330 ft) tall, leaving the rider visible across a huge distance. It’s famous in Bulgaria and was voted as the symbol to represent the nation on the Euro, should they opt to join the currency. Inscriptions on each side of the rider also provide the earliest written information on Bulgarian history, so it’s perhaps no surprise that it’s become the country’s foremost national symbol.

And yet despite how celebrated the carving is as a symbol, no one knows for certain who the rider is supposed to be. Some say he’s one of three of the earliest khans of Bulgaria. He could also be Tangra, a pagan god. 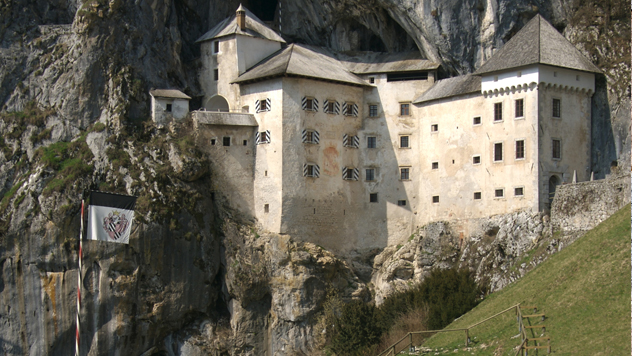 There are many ways to make your castle impenetrable, and building it on the side of a 123-meter (400 ft) cliff is high among them. Predjama Castle in Slovenia almost seems to be stuck on the front of the limestone face that bears it. Much of it is housed in a large natural cave. The castle as it’s seen today was largely constructed in the 15th century, when it housed its most famous inhabitant—the robber baron Erazem Lueger.

Lueger made the mistake of killing a relative of Fredrick III, the Holy Roman Emperor. Frederick sent his forces to besiege Predjama, and Luger was forced to hole up for a year and a day. The troops outside the castle weren’t aware that a secret tunnel linked the castle to a nearby cave, and Lueger used the tunnel to keep himself supplied.

The forces bribed a servant to signal them when the baron was going to be in the castle’s weakest spot—the outhouse. When Lueger made a visit to relieve himself, he was killed by a single cannon shot through the wall.

6 The Neptune Of Monterosso al Mare 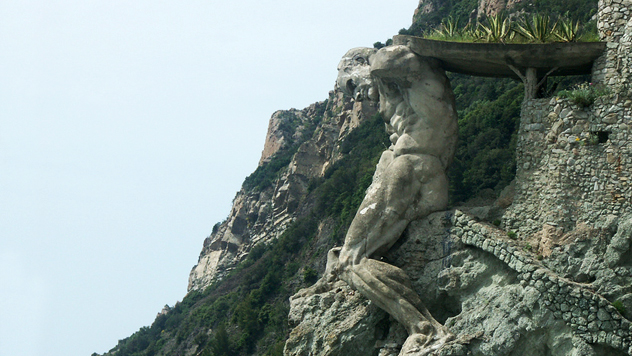 The Italian village of Monterosso al Mare is home to Villa Pastine, whose stone terrace juts over the edge of a large cliff. The terrace is held in place by a 14-meter (45 ft) tall statue of the god Neptune.

The 1,700-ton behemoth of iron and concrete was created in 1910 by sculptor Arrigo Minerbi. Naturally it became an iconic part of the town’s identity, looking out to sea as if holding back the waves. Whether by design or accident, it’s about a meter taller than the statue of Zeus declared to be one of the Seven Wonders of the Ancient World.

Sadly, the statue took a battering during the World Wars, losing both arms and the trident it held. With Neptune’s arms gone, nothing held up the sides of the terrace, and the giant seashell became a thin, overgrown rectangle. Further weathering has made the damaged Neptune appear almost part of the rocky outcrop on which he rests.

Though the statue’s original glory can only be seen in postcards from the early 20th century, what remains is still a sight to behold. Building a 16-meter (50ft) tall Buddha on the side of a mountain is an impressive achievement. Carving three of them with their feet already 30 meters (100ft) from the ground is just showing off.

Yet that is only one small part of the grottoes at Maijishan in China. The 142-meter (465ft) tall sandstone mountain has over 1,000 square meters (10,000 sq ft) of murals. Its face is also littered with the entrances to 194 caves, containing over 7,000 pieces of artwork amassed over the centuries.

The sandstone is too soft to carve statues directly from the rock, so combinations of clay, wood, and even imported stone have been used. A network of wooden stairs and balconies linked the cave entrances, but these have now been replaced with metal. The artwork within the caves traces the history of China through 12 dynasties. Some of the statues still retain their original bright paintwork, and unexplored caves offer further undiscovered treasures.

4 Saint Michael Of The Needle 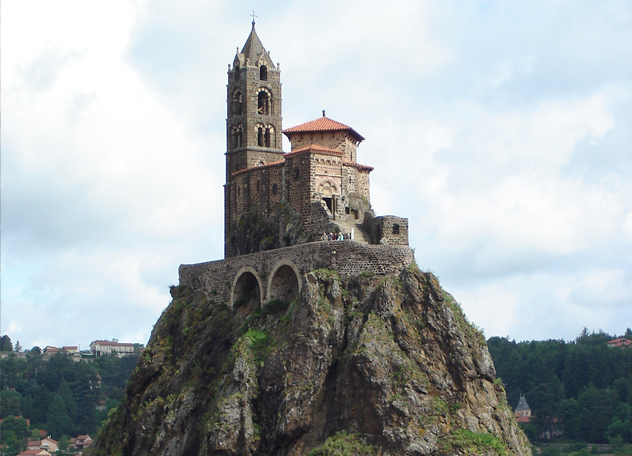 The small French settlement of Aiguilhe sits beside an 85-meter (280 ft) spire of volcanic rock. In ancient times, the Romans dedicated the basalt needle to Mercury. Now, the needle has a chapel that looks as if it the rock itself sprouted it. It’s the Chapel of Saint-Michel d’Aiguilhe, which was built in 962 and was enlarged a couple of hundred years later. A millennium later, it continues to dominate the surrounding landscape.

The chapel was built to celebrate a return from pilgrimage and became a popular starting point for people setting out on their own journeys. People now climb the 268 steps to the top to have their walking sticks blessed—likely necessary, if they want to make it back down again. 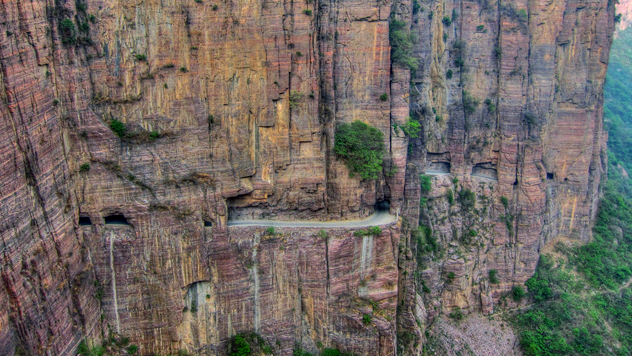 Until the 1970s, the outside world knew nothing of Guoliang, a village in China’s Taihang mountains. Only a few hundred people lived there, and the only way into the village was a slippery, narrow staircase.

The Chinese government had no interest in making travel more convenient for the villagers, but locals decided to take matters into their own hands. Thirteen workers began to dig through the edge of the nearby cliff, hand carving a 1.2 kilometer (0.75 mi) roadway through the rock over the course of five years. A stone ledge just a couple of feet high is all that separates users of the road from a very big fall.

The tunnel indeed made it easier to access the village, but it had the side effect of making the village a tourist destination, and tourism has become the village’s new main source of income. The uneven road surface makes visiting vehicles shake, which can be rather unnerving with a massive drop a couple of feet away.

If you visit, you’ll not be far from an outdoor spiral staircase up the side of one of the mountains in Taihang. The staircase climbs for 90 meters (300 ft) and shakes back and forth in the wind as you approach the top. There’s an age limit, so you can’t climb if you’re older than 60, and you need to sign a declaration that you’re in good health before you can go up. The people of Yemen have taken the idea of cliff castles and cliff villages and decided, “We can do better.” They built entire fortified towns, towering several stories high, just a few inches from the edge of sudden drops into abysses. Al-Hajjara in the Haraz Mountains is the most impressive of these, with its dozens of tall stone buildings perched on mountains and cliffs.

The buildings are hundreds of years old, with Al-Hajjara itself dating back to the 11th century when it was built by the Ottomans. It’s not difficult to see why these places were difficult to invade, and it’s easy to imagine they must’ve been a nightmare to build. 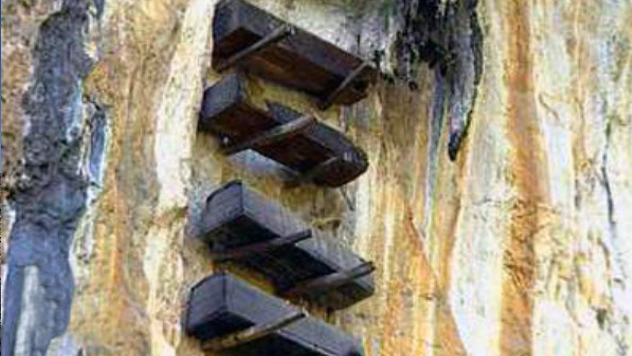 People will do some spectacular things to honor their dead—that’s how we got the pyramids, after all. In China, there are places where dozens of coffins line sheer cliffs. Some of the coffins sit on beams of wood hammered into the mountainside. Others have been placed in specially dug caves. All are at least 10 meters (33 ft) above the ground, with some as high as 130 meters (427 ft) up the cliff walls.

The coffins were resting places for the Bo, an ethnic group that dominated the area for millennia until they were massacred by the Imperial Army of the Ming Dynasty before the 17th century. The coffins weigh around 200 kilograms (440 lbs), and no-one knows how they got there. The Bo may have lowered them using ropes from above, or built mounds of earth to allow them to reach the necessary heights.

Alan would happily visit any of these places. If you’d like to buy him a plane ticket, drop him an email.