Let’s face it—childbirth is messy and kind of creepy. It’s weird, but at least we have the medical technology to understand the biology behind what’s going on. Yet pregnancy and birth has been going on for long before ultrasounds and even before hygiene, so ancient cultures had some pretty odd ideas about birth. Perhaps more surprising? Some of those ideas are still hanging around and gaining popularity. 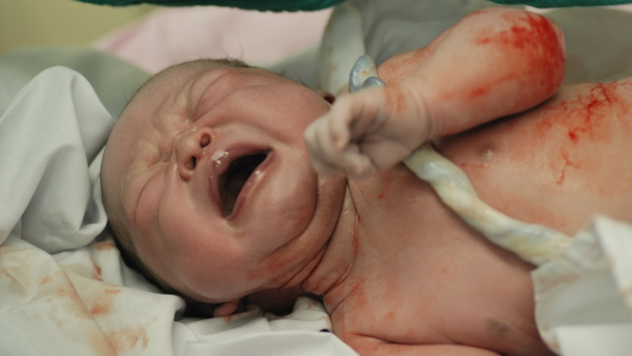 There’s no shortage of non-traditional, modern medical practices that revolve around childbirth. One such custom that’s gaining popularity is called the Lotus Birth. Instead of cutting the baby’s umbilical cord, the cord is left intact—and so is the placenta.

After the placenta is passed from the mother’s body, it’s set out alongside the baby to dry. It’s then rinsed and wrapped up; often, it’s coated with sea salt and herbs to keep it from smelling as it dries and decays, finally naturally detaching from the newborn baby.

Those that campaign in favor of the practice say it allows the baby access to the rich blood and stem cells still present in the placenta after birth. It also means that baby is less mobile while it’s still attached to the placenta, making it necessary for baby and mother to remain somewhat stationary for their first days today, supposedly increasing the mother-child bond. Opponents say that the lotus birth exposes the baby to an unnecessary risk of infection and the chance of absorbing a blood clot broken off from the inert organ. 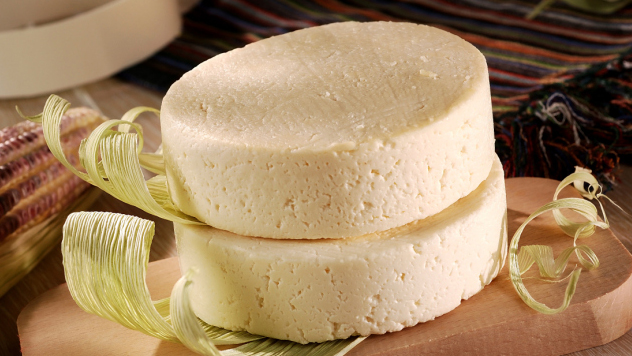 When it came near the time for a baby’s delivery, new fathers of Great Britain once had to provide a wheel of cheese and a cake for the family. The groaning cake was named for the complaints and pains that accompany the delivery of a child, and the cake and the cheese were part of the meal that would be eaten in celebration of the new child.

Traditionally, the doctor delivering the baby would cut the cheese and cake after the successful birth, and then it would be eaten by those coming to give the new parents their happy wishes. The cheese, typically in the shape of a wheel, was cut so that the outer shell of the wheel remained. The family would pass the baby through the wheel of cheese on the day of their baptism. In other areas, the first cuts of the Groaning Cheese were placed in the apron of the midwife; this was thought to bring dreams of lovers to young women in the family. 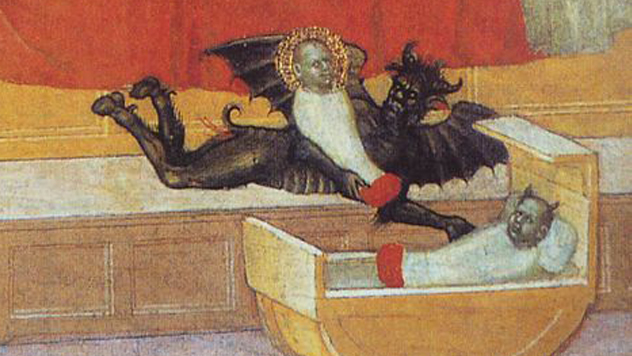 The trow are a mythical creature from the Orkney Islands in the north of Scotland. Sometimes confused with fairies, trow were mostly harmless aside from their pesky habit of stealing human newborns. As trow children were thought to be born weak and sickly, a healthy newborn baby was at a high risk for being stolen by the trow and replaced with their own child, called a changeling.

Babies who were born healthy but turned sickly were said to be changelings, and it was also used to explain babies whose physical or mental defects became evident as they grew up. Because of this danger, it was vitally important that a woman hide her pregnancy, lest she become a target for the trow.

Once the child was born, the first night was crucial. Tradition dictated that the mother or a close family member stay awake with the baby through the night to make sure it wasn’t taken. Another trow-related myth stated that women who died in childbirth were actually taken by the trow, and replaced with an enchanted block of wood. 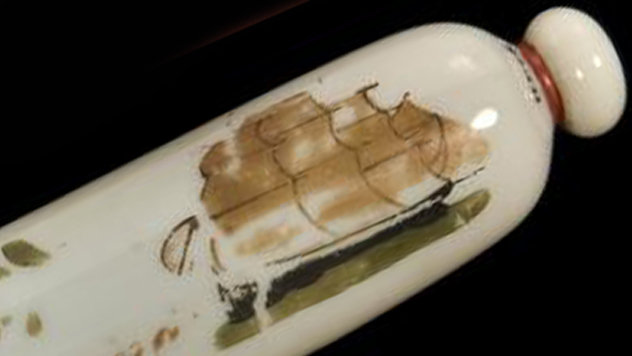 A baby born with a caul still has the amniotic sack over his or her head. It’s a relatively rare birth, rare enough that both the baby and the caul have some pretty steep claims associated with them.

In various European mythologies, it’s thought that the baby itself is incapable of drowning===probably because of the imagery of being essentially born with a watery sac over its head. The cauls themselves were said to act as a ward against drowning, and they became a much-desired artifact for sailors.

The Pitt Rivers Museum at the University of Oxford has several caul-related artifacts, including a hollow charm that once contained a child’s caul. These glass tubes, called rolling pins, were often brought back from overseas travels and presented to friends and family—eventually, the superstition grew so great that the rolling-pin-shaped charm itself took on a protective meaning. The museum also has a caul itself; thought to be lucky, their specimen has been preserved on a piece of paper behind pressed glass. It wasn’t uncommon for new mothers to sell the cauls of their children to sailors. 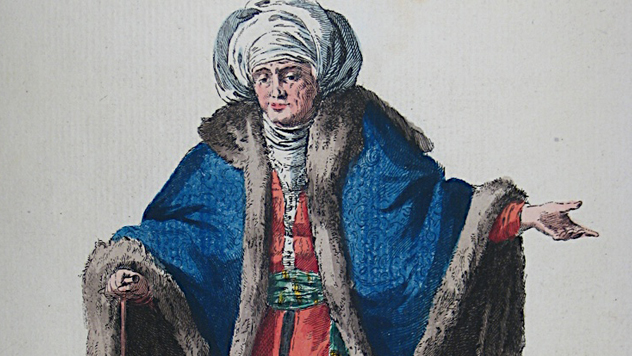 Medicine in 17th century rural Russia left much to be desired, and looking back, it’s clear that well-meaning individuals did more harm than good. Doctors weren’t around, so the local peasant population relied on folk healers called the znakharka. The counterpart to this folk healer – and the one that oversaw the births of peasant children – was called the povitukha.

The povitukha was a peasant woman who had no medical experience beyond having studied with a znakharka and then having training to become a midwife. This incredibly specified training actually consisted of no more than having had a child herself.

The povitukha made sure the birth was accompanied by all the proper rituals and prayers, and also stayed for a few days after the birth to help the new mother with her daily duties. While that was undoubtedly extremely helpful, less helpful was the actual midwifery. That included making the woman in labor climb onto a bench and jump off to speed the delivery, forcing her to vomit, and even hanging her upside-down by her feet.

It was also common to put rags up the new mother’s anus to make sure the baby came out the right spot. After that, it probably didn’t even matter that no one knew anything about hygiene and that povitukhas‘s rarely washed their hands. 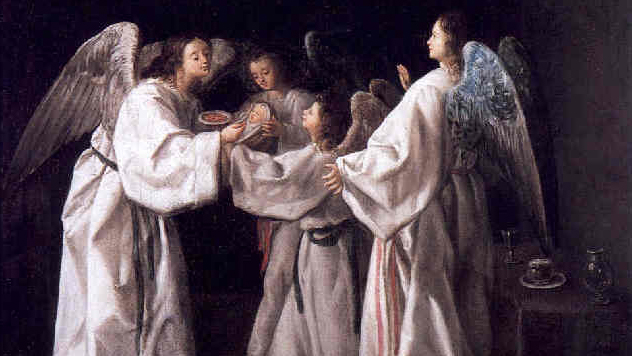 St. Raymond Nonnatus is the Catholic saint of childbirth, midwives and pregnant women. All things considered, he’s a bit of an odd one to pray to if you’re going to have your first child, as his mother died before giving birth to him. St. Raymond was born via posthumous Caesarean section, giving him his name—Nonnatus means “not born.”

The saint has parishes dedicated to him in New York City and Puerto Rico, and he has towns named for him in Argentina and Brazil have been named for him. Statues of him are found throughout the Spanish Empire. We’re thinking a lot of people miss the irony of appointing him guardian of pregnant women. 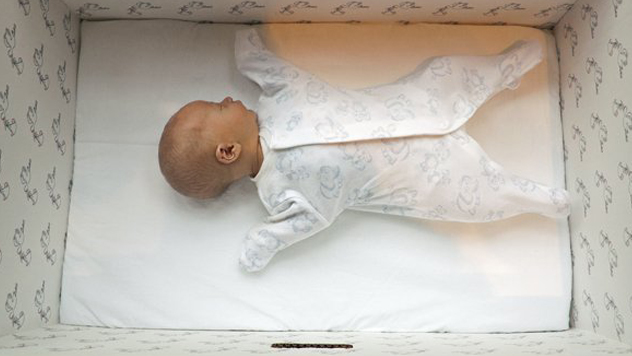 Cradles, bassinets, cribs—there’s no length or expense most new parents would go to in order to find a comfortable resting spot for the times their new bundle of joy is actually asleep. In Finland, though, it’s been a 75-year tradition that baby’s first bed is a cardboard box.

The tradition started in the 1930s, when the government began issuing maternity boxes to expectant mothers. While the point of the cardboard box is to show that all babies essentially start out life the same, it also had a practical purpose. Mothers had to go to the doctor to get the box and all it contained, and in a country where infant mortality was incredibly high, it helped encourage women to get the pre-natal care they needed in order to have a healthy baby. And it worked—the infant mortality rate dropped. The box also contains other goodies like clothing, bath towels, hair brushes, washcloths . . . and condoms. 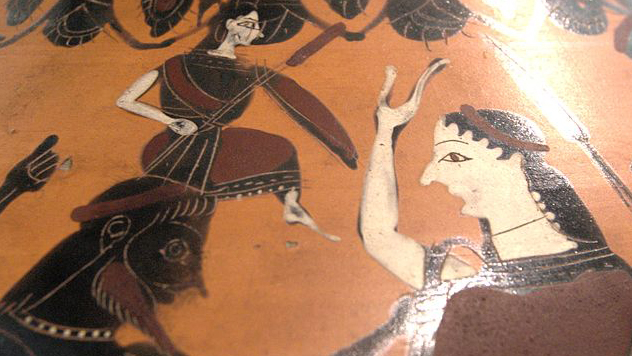 Eileithyia was the Greek goddess of childbirth, and was thought to watch over pregnant women and those delivering. As long as they didn’t have too many children and remained chaste when they were young, that is. While she assisted the women she deemed worthy, in true Greek goddess fashion she became a tyrant when angered or dishonored. Women who she deemed wanting in the chastity department would be cursed with a painful, drawn-out and even delayed birth.

Her mother was Hera, and she often assisted her mother in making deliveries miserable for those women Zeus had fathered children with. According to some legends, she made the birth of Hercules last seven days. While Aphrodite was the goddess of romantic love, she was also the goddess of love for reproductive purposes. Oddly, the animal associated with Eiliethyia was the polecat, because of the legend it gave birth to its young through its mouth. 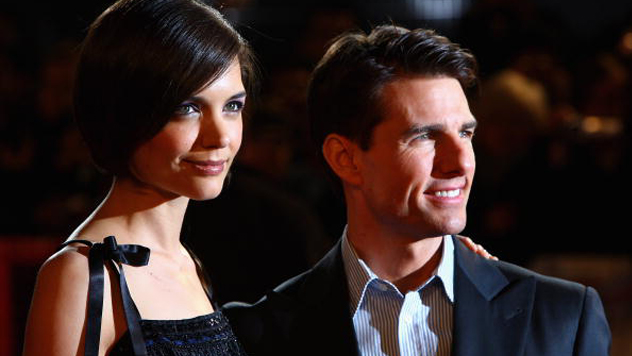 Naturally, any list about strange beliefs needs a mention of Scientology.

L. Ron Hubbard’s Dianetics claims that noise in the birthing room inflicts severe trauma on a newborn baby. What babies hear in their first moments, the book argues, can create a lifetime of irrational fears and nightmares—in fact, if you have any of those, that’s where they come from.

To keep this from happening, Scientologists create a calm, loving, and not-at-all-creepy birthing environment—one in which no one says a word. There should be no talking whatsoever, although Hubbard did say that the mother is still allowed to scream. She shouldn’t be encouraged or instructed in any way, as this might disturb the baby.

Hubbard’s “research, findings and practice of silent birth” has supposedly made life a better place for children all over the world. 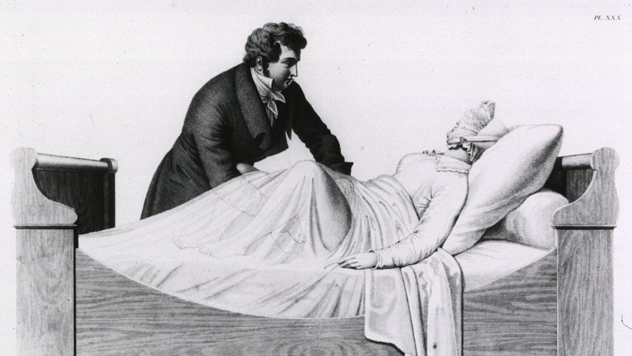 Greek physician Hippocrates, of the Hippocratic oath, blamed a wandering uterus for difficulties in conceiving (and for other female-exclusive problems, all termed “hysteria”). This was, as its name suggests, a uterus that had wandered off from its appropriate position in the body and was hanging out elsewhere.

If the woman was having chest pains, the uterus it had evidently wrapped itself around her heart. Stomach pains? It was banging at the stomach. The only solution was to lure it back to its proper place. this was done by the frighteningly logical method of applying honey or other sweet-smelling substance to the vagina in order to attract the uterus.

Pregnancy—or at least engaging in intercourse on a regular basis—was thought to keep the uterus happy and moist and content right where it was.