People often say, “A picture paints a thousand words.” While that holds true for most pictures, Leonardo da Vinci’s Mona Lisa has for centuries continued to evade the understanding of art critics, historians, and the public.

On display in the Louvre, the tiny portrait is often touted as “the best known, the most visited, the most written about, the most sung about, the most parodied work of art in the world.” As such, a deeper investigation into the mysterious smiling woman on the canvas reveals much more than meets the eye. 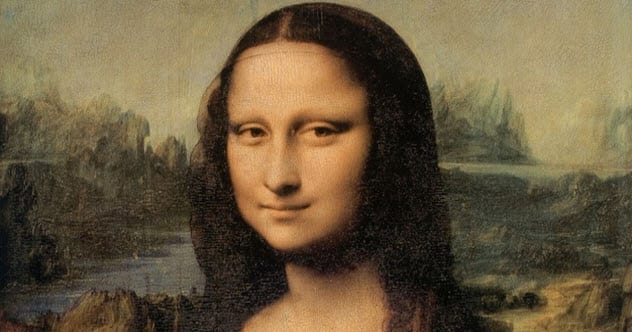 The true identity of the portrait sitter remains a mysterious aspect. The majority of thinkers believe the woman to be 24-year-old Lisa Maria de Gherardini (aka Lisa del Giocondo), an Italian noblewoman born in Florence in 1479.

Her portrait was commissioned by her husband, Francesco di Bartolomeo di Zanobi del Giocondo. She lived a middle-class life with her husband working as a silk and cloth merchant. She conceived five children: Piero, Andrea, Camilla, Giocondo, and Marietta.

Other hypotheses suggest that the woman in the painting matches the face of Caterina Sforza, the countess of Forli, and a most formidable foe in military operations. Another theory proposes the young lady to be a mistress of Giuliano de’ Medici, the ruler of Florence, or Isabella d’Este, the marquise of Mantua. Others have thought the woman to be a portrait of da Vinci’s mother or da Vinci himself due to the similarity of facial structures.[1] 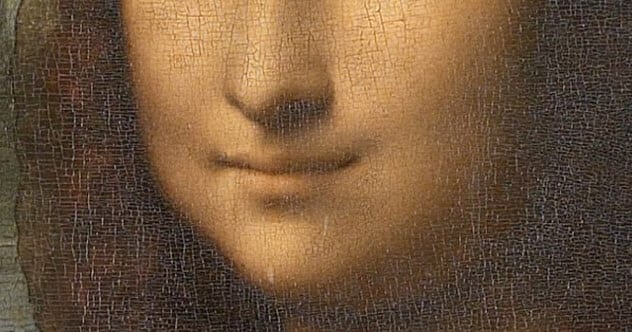 Mona Lisa’s enigmatic, intriguing, and profoundly perplexing smile is perhaps one of the most mysterious elements of da Vinci’s oil painting.

For five centuries, it has been argued whether she is smiling at all, whether she’s happy, or whether she’s sad. Professor Margaret Livingstone of Harvard University suggests that the “low spatial frequencies” at which the portrait is painted creates a striking smile when viewers look into her eyes.

With the development of “emotion recognition” computer programs in 2005 by Dutch researchers, the painting was revealed to be 83 percent happy, 9 percent disgusted, 6 percent fearful, 2 percent angry, less than 1 percent neutral, and 0 percent surprised.

However, many have said that her smile changes depending on where you look and at which angle and distance. In a close-up viewing, the fine detail gives the impression of a demure expression. But from far away, she appears to be smiling cheerfully.[2] 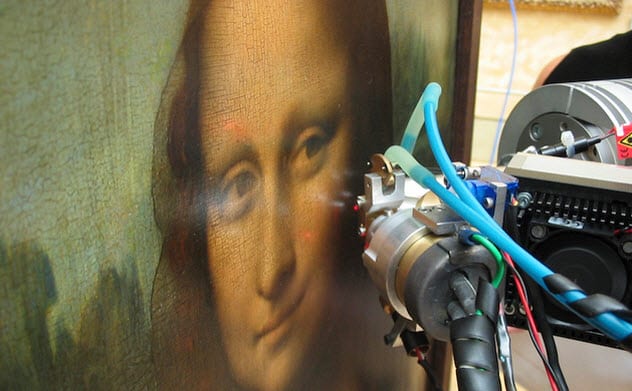 Through the microscope’s magnification of high-resolution images of the painting, Italy’s National Committee for Cultural Heritage has revealed the presence of a series of letters and numbers painted on numerous features of the canvas.

In Mona Lisa’s right eye, art historian Silvano Vinceti states that the letters “LV” appear, which is theorized to represent the artist’s own name, Leonardo da Vinci. In the left eye, the unclear outlines of the letters “CE” or possibly a “B” can be viewed. The bridge in the background features the number “72” or the letter “L” followed by a “2” painted onto its arch.

One may wonder what the artist intended when he mysteriously painted these letters and numbers in a form invisible to the naked eye.[3] 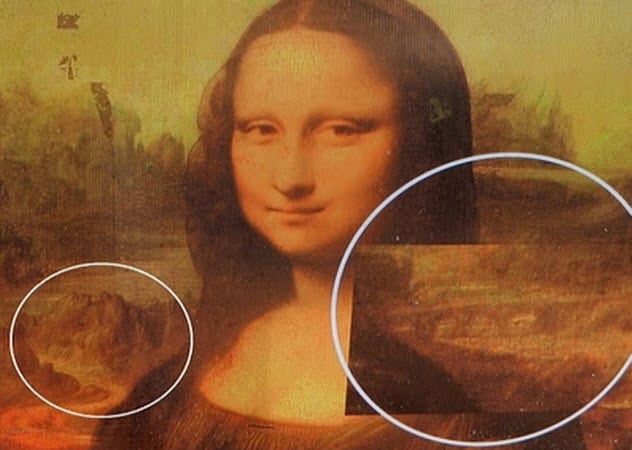 The dreamlike vista behind Mona Lisa’s head is often overshadowed by the allure of her face. But the three-arched bridge in the background begs the question about the exact location of the hazy, mysterious landscape.

Italian historian Carla Glori suggests that the bridge featured over the left shoulder of the woman is known as the Ponte Gobbo or Ponte Vecchio (“Old Bridge”). It is situated in Bobbio, a small village in a hilly country south of Piacenza in northern Italy.

Glori’s theory follows Vinceti’s finding of the number “72” secretly hidden in the stone bridge. She proposes that the number is a reference to the year 1472. In 1472, a disastrous flood occurred. The River Trebbia burst its banks and destroyed the bridge of Bobbio.

In her book The Leonardo Enigma, Glori theorizes that “Leonardo added in the number 72 beneath the bridge to record the devastating flood of the River Trebbia and to allow it to be identified.”[4] 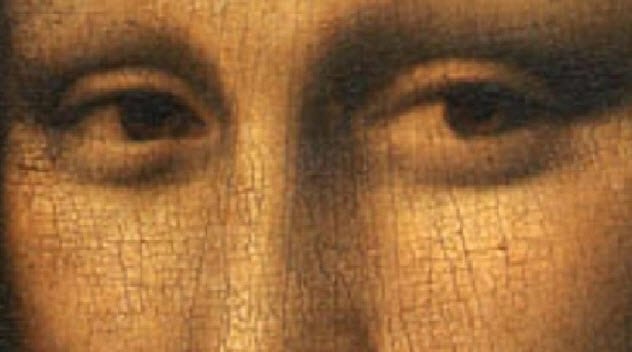 How is it possible that her gaze seems to extend beyond the confines of the painting, but simultaneously, it is directly held at the viewer? No matter where you move, she continues to meet you eye to eye. In our three-dimensional world, shadows and light on surfaces should shift according to our vantage point. But this does not correlate to a two-dimensional surface.

This optical phenomenon can be explained by a scientific understanding described by the University of Ohio which shows that an image may appear exactly the same no matter the angle at which it is viewed. Unknown to Leonardo da Vinci, his masterful manipulation of chiaroscuro on the canvas creates an intensely realistic sense of depth in the interplay of shadow and light.

Indeed, this phenomenon creates perspective and gives the Mona Lisa her unsettling gaze.[5]

5 A Hidden Painting Behind The Portrait 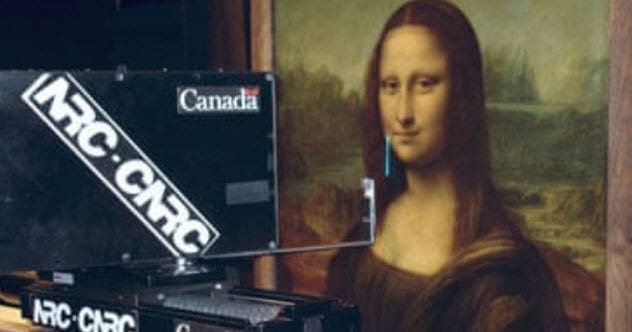 Using infrared and laser imaging on the Mona Lisa in 2006, scientists in Canada revealed da Vinci’s rudimentary sketches, including a change of position in the index and middle fingers of the left hand. Through this, numerous discoveries emerged, such as the lace drawn on Mona Lisa’s dress and the blanket on her knees extending to cover her stomach.

In 2015, French engineer Pascal Cotte used similar techniques of projecting light beams at varying wavelengths onto the work and measuring the quantities of light reflected back. Curiously, his discovery presented a secret portrait behind the Mona Lisa we see today.[6]

In what Cotte terms the “layer amplification method,” he states, “We can analyze exactly what happens inside the layers of the painting’s creation, and we can peel them like an onion.” Cotte found four images beneath the uppermost painted surface, including a painting of a younger woman with petite facial features and no smile.

Different theories have surfaced surrounding the real identity of the woman in the painting, but perhaps her true face will always remain a mystery. 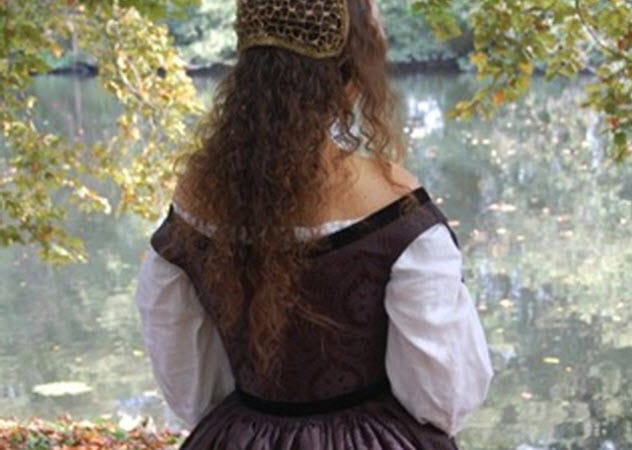 The art historians who think that the woman is Lisa del Giocondo also believe that she was with child when da Vinci painted her. Her arms crossed over her rounded stomach as well as historical evidence that suggests del Giocondo was pregnant for the second time when the painting was done perpetuate the idea that Mona Lisa was expecting.

Furthermore, the infrared scans indicate evidence of a guarnello (“veil”) draped across her shoulders. A guarnello is an overgarment made of linen and worn by a pregnant woman.[7]

It has been speculated that this veil could simply be a scarf or piece of fabric hung over her shoulders. However, the Mona Lisa’s hands over her stomach, the historically accurate timing of her pregnancy with that of del Giocondo’s, and the similar use of a guarnello on the pregnant Smeralda Brandini in Sandro Botticelli’s portrait suggest that Mona Lisa was mysteriously hiding a baby bump.

3 Why We Find Her Beautiful

Throughout history, the portrait of Mona Lisa has been cited as an example of timeless beauty. It would be very limiting to suggest that the Mona Lisa’s beauty and intrigue is restricted only to her gaze and her smile as it seems to extend beyond these two features into a transcendental and ineffable beauty that is felt.

The golden ratio is derived from the length to width dimensional relationship of rectangles and is supposedly the most aesthetically pleasing proportion to the human eye. Present in natural structures such as the spiraled center of sunflowers and the man-made columns of the Parthenon, the golden ratio was termed the “divine proportion” by Leonardo da Vinci himself.[8]

When a rectangle is formed around Mona Lisa’s face as per the ratio, her chin, the top of her head, and her nose are exactly aligned. The prevalence of this golden ratio in the artwork perhaps explains the mysterious intrigue felt by those who behold the portrait. Her proportions are deemed the most pleasing to the eye, producing a sense of natural balance and beauty.

Who knew that mathematics could explain this long-held sense of allure? 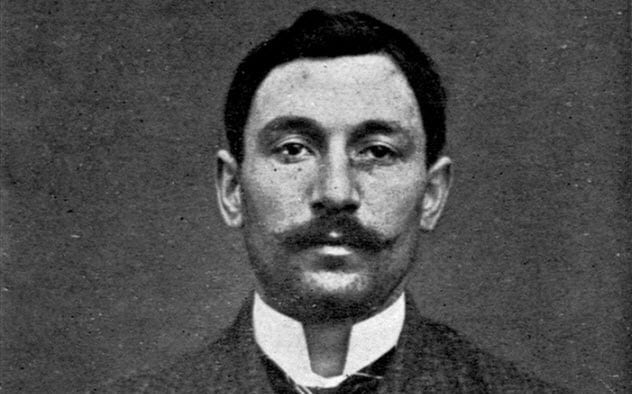 The Mona Lisa was stolen in 1911 by an Italian employee at the Louvre named Vincenzo Perugia. (Some spell his last name “Peruggia.”) He believed that the painting had been stolen from Florence by Napoleon Bonaparte and wished to see it returned to its “true home.”

For two years, the location of the painting remained a complete mystery as media coverage worldwide speculated on possible reasons for its absence and its location. Then, in 1913, Perugia came into contact with Italian art dealer Alfredo Geri. Perugia requested a monetary reimbursement from the Italian government in exchange for transporting the Mona Lisa back to Florence.

Upon the painting’s return, speculation continued. Perugia’s offer to return the painting to Italy had seen him request a rather modest amount of money. The public began questioning whether the incident of the stolen painting was all a ruse created to increase interest in the painting and the gallery.

When it was revealed that the thief behind the stolen painting—who had collaborated with Perugia—was none other than the well-known art forger Eduardo de Valfierno, people began theorizing that the Mona Lisa was stolen to make a copy of the painting and sell the forged copies to unaware art collectors for vast amounts of money.[9] 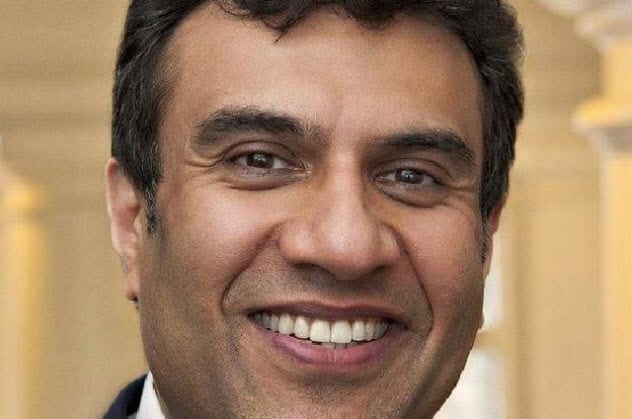 The mystery behind Mona Lisa’s lopsided smirk has perhaps finally been cracked by a Boston physician standing in line and waiting to view the tiny painting. Dr. Mandeep R. Mehra diagnosed Mona Lisa with a glandular condition as he noticed the odd details of her appearance—her sallow complexion, thinning hair, and misaligned smile.

Mehra works as the medical director of the Heart and Vascular Center at the Brigham and Women’s Hospital. He stated his difficulty of appreciating art in competition with his keen eye for clinical diagnoses.

Mehra observed the presence of a small, fleshy bump in the inner corner of her left eye, her thin and receding hairline, her lack of eyebrow hair, and a bulge next to her index finger. Coupled with her yellow skin and the bump on her neck as an indicator of an enlarged thyroid gland, he suggested that her odd smile may be caused by muscle weakness.[10]

Thus, he came to the conclusion that Mona Lisa was suffering from a condition called hypothyroidism, in which her swollen hands, thin and lank hair, and lump on her neck all feature prominently in da Vinci’s portrait.

Mehra furthered his investigation into the historical conditions surrounding the woman’s diet and discovered that iodine-deficient food was commonly eaten in the early 16th century. As iodine is an essential nutrient with the role of maintaining thyroid health, the mystery of Mona Lisa’s curious smile might finally be put to rest.

I am a writer passionate about art, books and films and am currently undertaking a degree in international studies.