You’ve heard of the Grand Canyon, the Galapagos Islands, and Venezuela’s Angel Falls; you’ve probably even heard of more obscure natural wonders, like the needle-like rock forests at Tsingy de Bemaraha. But no matter how much of the Earth we cover, there’s always something breathtaking just around the bend. 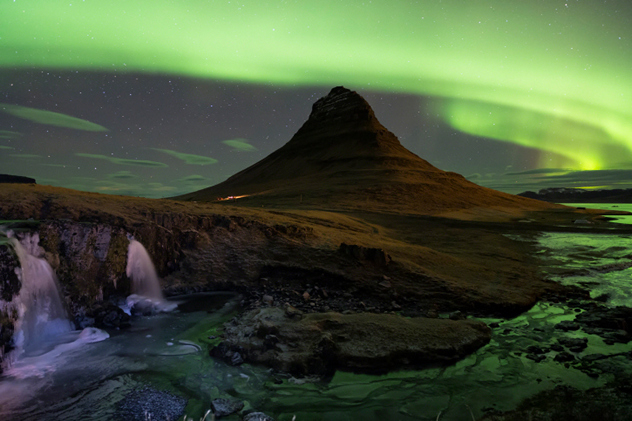 Kirkjufell Mountain is best known for the stunning pictures brought back by tourists. Located on the Snaefellsnes Peninsula in Iceland, there isn’t anything impressively significant about the mountain itself. It’s not the biggest mountain in Iceland, or the deadliest, and it can’t even claim to be one of the many volcanoes that have given Iceland the reputation of producing a third of all the basaltic lava in the history of the world.

But if there’s one thing that makes Kirkjufell stand out from the pack, it’s how all the elements of the scenery fall together. This is a photogenic mountain. From the Middle-earth landscape to the trio of waterfalls feeding a crystal clear stream at the mountain’s foot, it all creates a perfect portrait of idyllic Iceland. Even the weather pitches in. And, as the picture above shows, Kirkjufell is smack dab in the center of one of the best places to view the stunning Northern Lights. 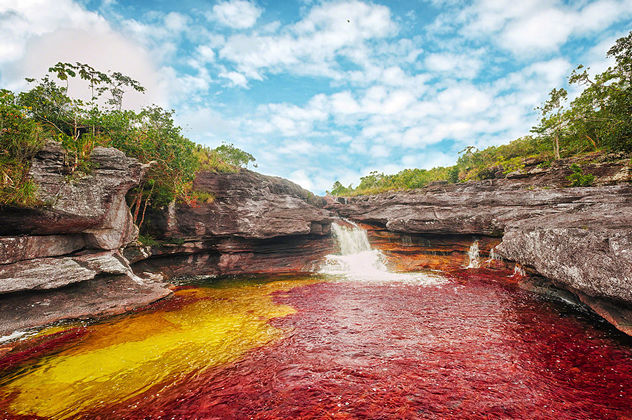 Known to the locals as the “River of Five Colors,” Cano Cristales is truly a hidden paradise. Tucked away in the mountains of Colombia, there are only two ways to reach the river, and both of them are by plane. The colors of the river come from a combination of algae, the natural hue of the river rocks, and the blue of the water itself. In particular, the red comes from an aquatic plant called Macarenia clavigera.

Because the coloration comes from living creatures, the effect shifts constantly, like a living watercolor painted by God’s own hand. The most spectacular time to see Cano Cristales is in the summer, when the heat brings out the most vibrant shades of red. In addition to the striking colors and the incredible biodiversity of the region, Cano Cristales also flows over some of the oldest rocks in the world—the Guiana Shield, which formed about 1.2 billion years ago. 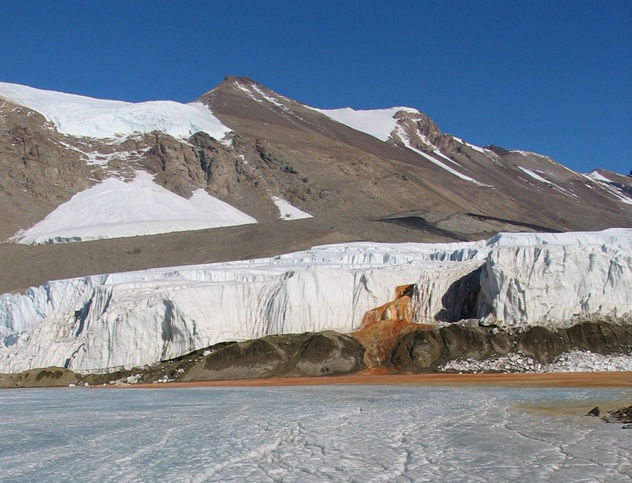 Antarctica isn’t usually the first place that comes to mind when you picture a paradise, but as harsh and unforgiving as the weather may be, the landscape can be equally beautiful. We’ve only begun to really explore this frozen continent, but we’re finding more and more wonders hidden beneath the ice.

One striking example of Antarctica’s uniqueness can be found at the Taylor Glacier, which vomits a continuous stream of iron-rich hypersaline water onto the surrounding snow. The glacier was discovered in 1911 by an explorer named Thomas Griffith Taylor, who surmised that the reddish tint was caused by an unknown form of bacteria. It wasn’t until much later that we found the real reason for the spring of blood-colored water—an ancient underground pool of saltwater about 400 meters (1,300 ft) below the surface of the ice.

During the Miocene period, about five million years ago, water levels around Antarctica rose enough to leave a lake of saltwater on the previously dry land. When the ocean receded, it stranded the lake, which was then slowly covered by a string of glaciers until it was completely cut off from the surface. With no oxygen, the lake was left in almost the exact same state as when it was covered—it became a five-million-year-old time capsule. There are microbes down there that have remained unchanged since the Miocene period, and they’re responsible for breaking down iron deposits in the salty water. Once that iron-rich water squeezes its way up through a fissure to the surface and comes in contact with oxygen for the first time, the iron hydroxide reacts instantly, giving us a waterfall of rust—the Blood Falls. 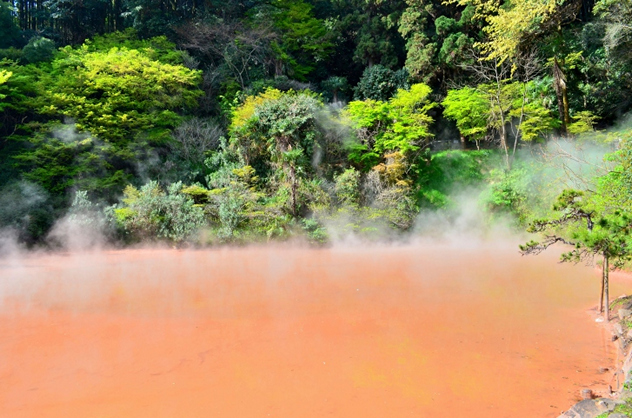 Beppu, Japan is one of the world’s hot spring hot spots; there are more than 2,500 springs in the area—the second largest such cluster in the world. The springs are colloquially known as the “Eight Hells,” since there are eight main areas, each producing a unique type of spring. Blood Pond Hell, pictured above, is saturated with iron, giving both the water and the steam a dark reddish tint.

Some of the other Hells include Demon Mountain Hell, which houses about 80 crocodiles; White Pond Hell, which contains boric acid that gives the water a milky consistency; and Oniishi Shaven Head Hell, which is a mass of bubbling mud that—supposedly—resembles the shaven heads of monks rising to the surface. Entire commerce systems have arisen around the springs, letting you buy vegetables cooked in the Hells’ steam or eggs boiled right in the multicolored water. There are also smaller springs that are cool enough for a foot bath, although the main springs are peppered with “Do not swim” signs—the water in some of the Hells can reach a blistering 150 degrees Celsius (300 °F). 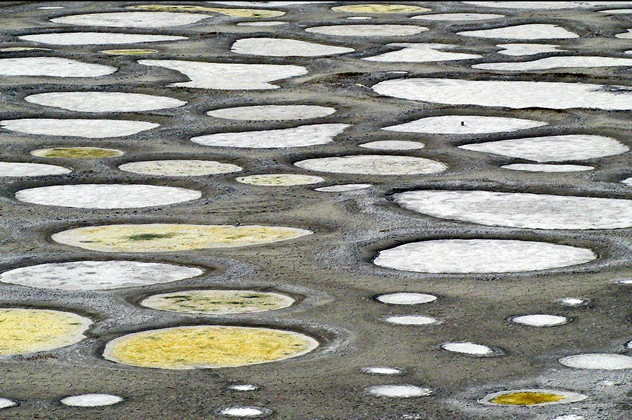 Used with permission from: Jacqualine Muller

The Okanagan Valley lies at the extreme southern border of British Columbia. For thousands of years, aboriginal tribes have lived and battled in the valley, and their legends remain to this day. One of their most prominent legends told of a battle that occurred in the hills around Spotted Lake—then known as Khiluk to the First Nations of the region. During the battle, both sides called a truce and allowed their men to bathe together in the mineral-rich waters of Spotted Lake.

The alleged healing properties of the lake are still advertised today. There are high concentrations of 11 different minerals, including calcium and magnesium sulfate, and some trace amounts of titanium and silver. In the summer, when the lake partially evaporates, the minerals precipitate into rounded “holes.” Each hole takes on a different color, depending on which minerals are more concentrated in that particular spot. 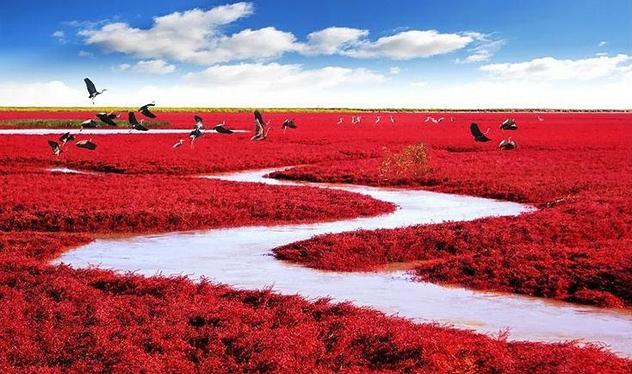 Used with permission from: Goglee

This gorgeous crimson landscape is located in China, near the city of Panjin. It’s situated in the middle of an immense, sprawling wetland area in the Liaohe River Delta, but it’s the only part of the wetland that takes on this vibrant coloration. Rather than sand, the beach is covered with a highly alkaline soil, which is too basic for most plants to live on. That leaves little competition for the Suaeda salsa, a species of seaweed that has completely taken over the 1.4 million acres that make up Red Beach.

In the summer, the seaweed is a dark green color—pretty but not exactly breathtaking. But in autumn, the mature plants take on a fiery red color that turns the beach into a one-of-a-kind spectacle. Most of the beach is closed to visitors in an effort to protect the delicate ecosystem, but there’s a small section that’s open to tourists. 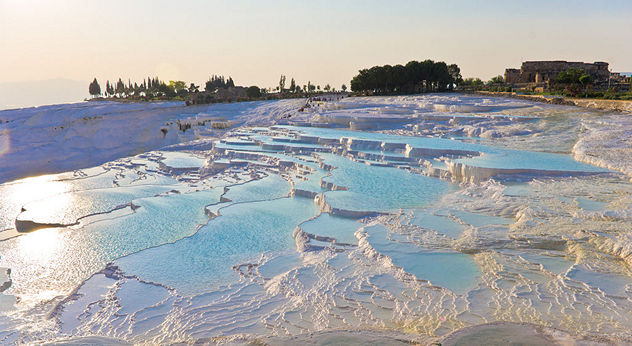 One of the most unique sights in the world is, without a doubt, the cliffside travertine pools in Pamukkale, Turkey. Travertine is a type of limestone that’s found in a lot of the world’s hot springs. When the spring reaches the surface, the travertine solidifies into stepped structures that hold the spring water. The fairy-tale result usually looks like something out of a Dr. Seuss book—layers of crystal clear pools stacked on top of each other. No matter where they form, they’re usually beautiful.

Pamukkale was the ancient site of the Greek city of Hierapolis, and the name itself means “cotton castle.” From a distance, that’s absolutely what it looks like. The pools are initially formed from soft calcium carbonate that later solidifies into travertine. Because of the high calcium content, the end result is a hillside that’s white as snow. 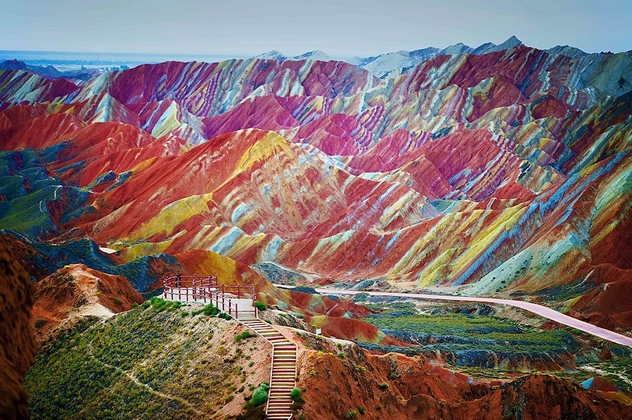 Used with permission from: Ghost Dog

The Zhangye Danxia Landform Geological Park is located in southwest China and contains more than a few unusual features. Probably the most startling are the multicolored mountains known as Danxia landforms. The surreal coloration comes from red sandstone and natural mineral deposits that have formed over the course of 24 million years. Each “stripe” constitutes a different mineral, and over the ages, they’ve formed layer upon layer, resulting in a rainbow pattern. Erosion from wind and rain has further polished the surfaces of the mountains.

China is the only place in the world with this type of mineral formation, and a few of the landforms have become UNESCO World Heritage Sites. The town of Zhangye has capitalized on the international interest in the Danxia landforms, and there are dozens of separate tour companies leading groups into the rainbow mountains. 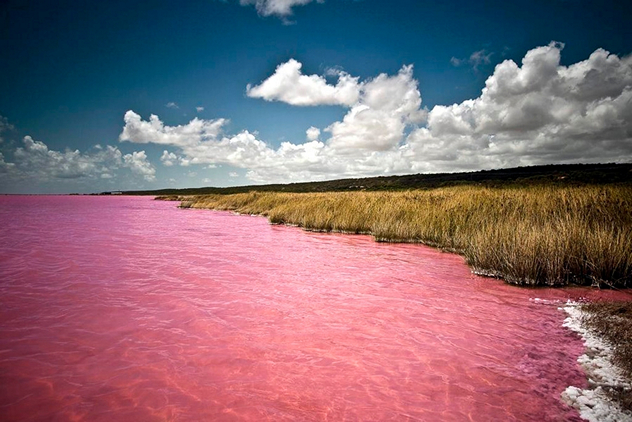 Used with permission from: Our Breathing Planet

There are a handful of names that have been given to this lake, some by locals and some by visitors, but they all essentially mean the same thing: “The Pink Lake.” And while that may not be the most creative moniker, it’s definitely the most accurate. Lake Retba is located in Senegal, and it’s only separated from the Atlantic Ocean by a thin strip of sand dunes. Because of that slight geographic separation, a species of algae called Dunaliella salina has been able to proliferate in the lake’s warm waters.

Found only in a few places in the world, Dunaliella algae are salt lovers—which is good, because Lake Retba is as salty as the Dead Sea. In order to survive such salty conditions, Dunaliella produce a red pigment that allows them to absorb more sunlight and produce beta carotene, which acts as a buffer against the salt. The saltier the lake gets (particularly in the dry season), the deeper the red gets. During particularly dry seasons, the lake will take on a hue that can only be described as “bloody.” 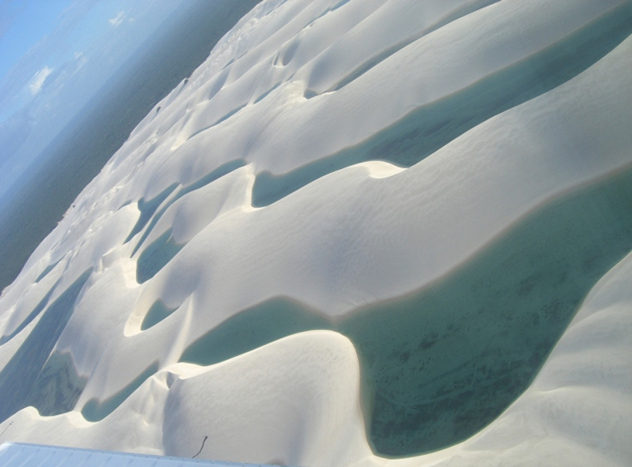 An oasis in the middle of the desert makes a pretty picture, but they’re few and far between in most of the world’s arid regions. Lencois Maranhenses National Park, on the other hand, is absolutely peppered with them. Located in northeastern Brazil, this sand-covered, 155,000-acre park isn’t actually a desert, even though it looks like one. It’s located right outside the Amazon jungle and receives the same amount of rainfall you’d expect to see in a tropical rainforest. When the rainwater collects between the dunes, it forms thousands upon thousands of separate lagoons that stretch as far as the eye can see.

Each lagoon functions as a completely unique ecosystem. Despite the lack of inlets or outlets, many of the standalone lagoons are filled with fish that were carried to the pools as eggs by seabirds. But since the sandy ground is largely devoid of nutrients, very little vegetation grows in Maranhenses, turning it into sort of a combination of two worlds, like oil and water stirred into the same bowl.