Society seems to be as fascinated today with dwarfs as we were when medieval kings kept them as court jesters. Several reality shows demonstrate the trials and tribulations of surviving in a world made for average-sized folk. Little people abound in our film and mythology, and despite their short stature, they have made a massive mark on the world. 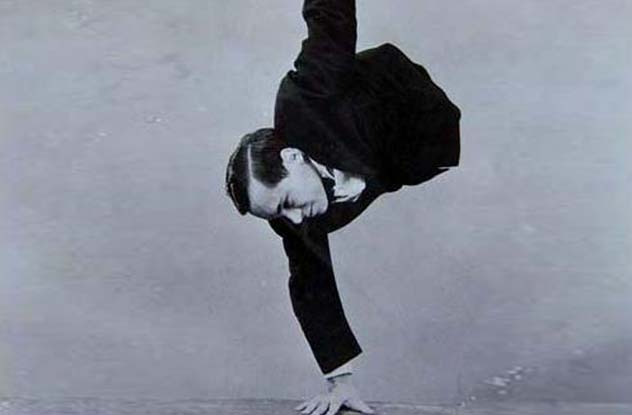 We don’t know which entertainer first sawed an assistant in half, but by the 1920s, the illusion had become relatively common. There are many variations on the trick, but the most shocking was a version called “The Miracle of 37” performed by magician Rajah Raboid.

Raboid made use of three people in his act—Johnny Eck, brother Robert Eck, and a dwarf. Johnny Eck had a rare condition called sacral agenesis, which gave him tiny, undeveloped legs and feet without making him a true dwarf. Often billed as the “Half-Boy,” Eck appeared in the cult classic film Freaks, walking around on his hands.

In Raboid’s version of the trick, the dwarf served as the feet poking out of the box, while the fully developed twin Robert served as the head. When the blade ran through the center of the box, the dwarf (dressed up as the legs) ran about while Johnny chased around the rest of his “body” on his hands. They often ran right through the audience, leading to shocked chaos, as people fainted and trampled each other in the rush to escape the horrible scene.

Scientists at the Centre Mediterraneen de Medecine Moleculaire in France have developed a decoy protein called sFGFR3, which has worked to restore bone growth in mice with achondroplasia-like conditions. There remains much work to be done before this treatment can be applied to humans, but researchers are hopeful.

For now, dwarfs looking for treatment turn to limb-lengthening surgeries, traditionally reserved for people with legs of different lengths. Doctors break the tibia repeatedly over a period of months, forcing the leg to gradually add bone over time and lengthen itself. This extremely painful operation has a grueling recovery process. The best anyone can hope for with current technology is about an extra 7.5 centimeters (3 in) of height.

Many countries have banned this cosmetic surgery completely, and even where it’s legal, it’s far too expensive for many people. Those wishing to undergo the procedure typically become medical tourists in countries such as Russia, where regulations are more slack and care can be had cheaply.

Historically one of the best teams in baseball, the Boston Red Sox labored for 86 years under the so-called “Curse of the Bambino,” continually falling short of winning the World Series. In 2004, they finally defied the odds and won it all. Precisely what shattered the curse is unknown, but it may well have been the influence of a very, very small man.

At 71 centimeters (2’4″), Nelson “Mahow” de la Rosa was one of the shortest men in history, recognized by Guinness World Records in 1989 as the shortest known adult. Although he would not hold on to this title, he went on to greater fame in 2004, when a mutual friend introduced him to Red Sox pitcher and fellow Dominican Pedro Martinez.

Before his stint as the Red Sox’s good luck charm, de la Rosa was probably best known for serving as Marlon Brando’s assistant in the film The Island of Dr. Moreau. He died on October 22, 2006 from heart failure.

Pedro Martinez was not the only athlete to employ a dwarf. Boxer Sugar Ray Robinson also had one in his entourage, a driver named Chico, who went around armed. 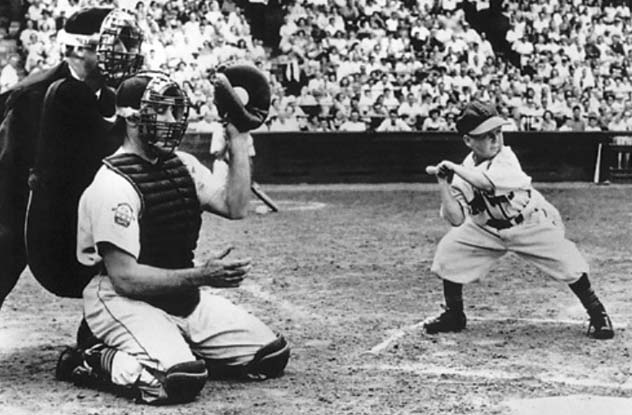 On August 19, 1951, Major League Baseball saw a dwarf at bat for the first and only time in history. St. Louis Browns player Eddie Gaedel was only 109 centimeters (3’7″) tall.

Gaedel wasn’t a legitimate player though—this was a publicity stunt based on the short story “You Could Look It Up,” which featured a dwarf playing baseball. Browns owner Bill Veeck threatened Eddie not to swing on penalty of death. The pitcher of the opposing Detroit Tigers, Bob Cain, threw two genuine attempts at strikes then doubled over with laughter. He lobbed two more balls to walk Eddie to a standing ovation.

Gaedel was promptly replaced by a pinch runner, and the following day, his contract was voided. His story from that point went from mildly sad to outright tragic. In 1961, he was followed home from a Chicago bowling alley and savagely beaten. His mother found his bruised corpse in bed the next day.

The only baseball player to attend his funeral was Bob Cain, the man who had pitched to him a decade before. 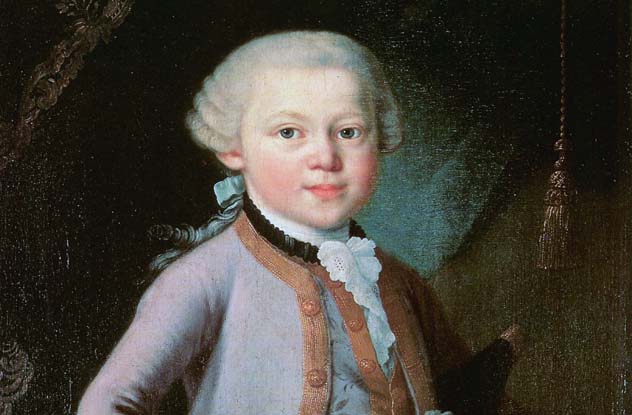 People often find genius disconcerting, and when Wolfgang Amadeus Mozart showed signs of prodigy during his early youth, people looked for some kind of trick. By the time he was six, he was traveling with his family to royal courts to exhibit his abilities. One of Mozart’s skeptics, Daines Barrington of the Royal Society of London, studied the boy closely when he was nine, believing perhaps that he might be some kind of dwarf of advanced age who merely appeared to be a child.

But while young Mozart may have been a genius in many aspects, he was still very much a little boy. He would run around with a stick between his legs, pretending he was riding on a horse. During the tests that Barrington arranged to measure Wolfgang’s talents, he was also easily distracted, preferring to play with a cat than exhibit his abilities on the harpsichord.

Radio shock jock Howard Stern’s formula has always included a retinue of bizarre personalities, a revolving group dubbed “The Wack Pack.” Several of these have been dwarfs, including microcephalic Lester “Beetlejuice” Green and wheelchair-bound Eric “The Midget” Lynch. Their notoriety has earned them several small acting roles.

Another member of the Wack Pack was Hank “The Angry Drunken Dwarf” Nasiff. Hank showed up randomly at the radio station in 1996 and Stern put him on the air. The 125-centimeter (4’1″) Hank was a hit and appeared frequently. In 1998, Hank won People Magazine’s “Most Beautiful” person poll, getting nearly 20 times as many votes as favored candidate Leonardo DiCaprio (fresh off Titanic fame). The press had a field day with the incident, calling it evidence of the emergence of a “digital democracy.” In retrospect, we would probably call this “trolling on a large scale.”

Sadly, the “drunken” part of Hank Nasiff was more than just a nickname—he really did have a terrible drinking problem, and it took a toll on his body. He died in his sleep on September 4, 2001, aged 39. 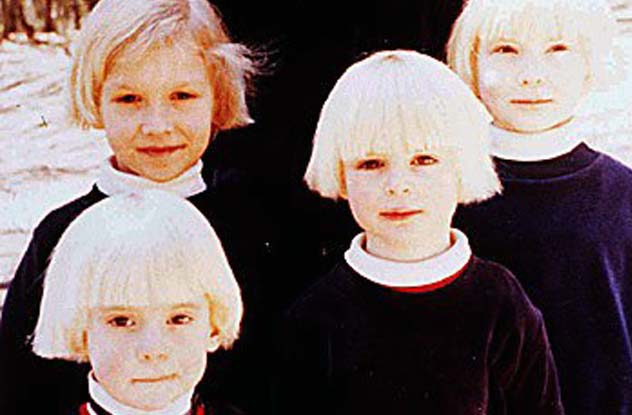 Children suffering abuse naturally experience various complications, but here’s one that you’d never expect: Stress can make a child a dwarf. Even when children receive adequate nutrition and have no congenital issues, they can suffer from a condition called psychosocial short stature or psychosocial dwarfism.

This condition, which generally affects children between 2 and 15 years of age, is caused when the environment is so negative that the body constantly produces stress hormones such as epinephrine. This takes an enormous amount of energy away from the body’s other functions, including digestion and the production of growth hormones. In the most extreme cases, the body completely ceases to grow.

This phenomenon is commonly noted in feral children—scraping to survive in the wild allows little time to properly grow. Then when the children are separated from the animals that raised them, the stresses of being introduced to human society are so traumatizing that all further growth stops.

Many sources legally define dwarfism as standing at less than 147 centimeters (4’10”) at adulthood. This is remarkably short, but many people without medical conditions fall into this range, including Jersey Shore personality “Snooki” Polizzi. Some true dwarfs have stood at less than half that size.

According to Guinness World Records, the shortest adult reliably recorded is Chandra Bahadur Dangi, a Nepalese man in his mid-seventies. Dangi is a primordial dwarf only 54.6 centimeters (21.5 in) tall, with a normal-sized head and a tiny body. Precisely what caused this condition is unknown; Dangi is the only one in his family who is not of normal size.

Although he can walk, Dangi only does small tasks around the house. His family reports that he has always been in good health, somewhat surprising since extremely short people tend to have abbreviated lifespans and various health issues.

2The Seven Dwarfs Of Auschwitz 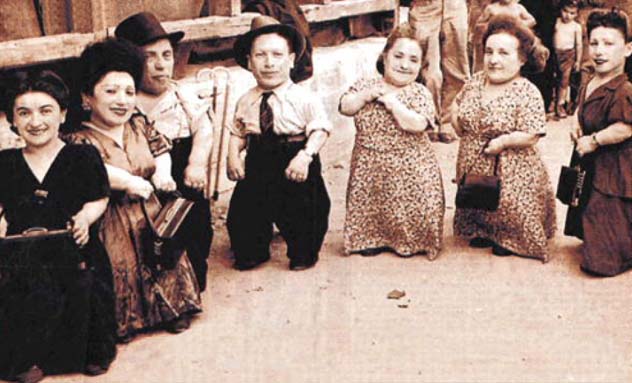 Photo via The Human Marvels

The Ovitz clan hailed from Romania, descended from dwarf Shimson Ovitz, a comedian and rabbi. Ovitz had 10 children, seven of whom were dwarfs, who traveled as entertainers called “The Lilliput Troupe.”

The Ovitzes performed throughout World War II, but they were rounded up in May 1944 and sent to Auschwitz. As the Nazis were not particularly well known for their love of either Jews or those with disabilities, it might seem that their stay in the concentration camp would be a death sentence, but for better or worse, the group instead caught the attention of Dr. Josef Mengele.

Rather than send the Ovitzes to the gas chamber, Mengele performed horrible experiments on the dwarfs. He took their blood, extracted their bone marrow, and ripped teeth from their jaws. However, Mengele made special efforts to keep them healthy so he could continue his tests. The dwarfs had better living conditions and food than other prisoners. The taller family members were kept around to help with various tasks, including carrying around their tiny relatives.

With the exception of one average-sized brother who was killed in an escape attempt, the Ovitzes all survived until Auschwitz was liberated. Later, they immigrated to Israel and continued their entertainment career. The last dwarf survivor, sister Perla, died in 2001. 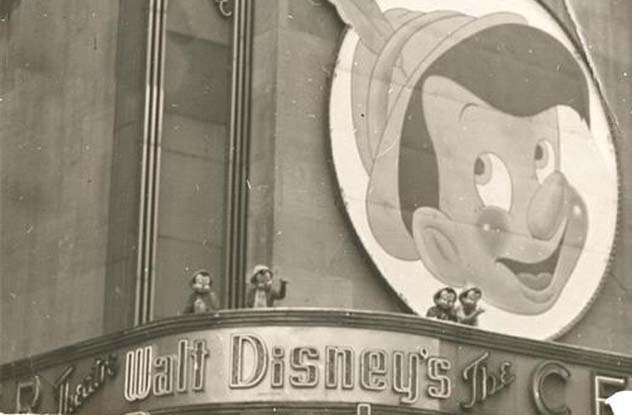 1937’s Snow White and the Seven Dwarfs was a massive hit for Walt Disney, raising high hopes for the next film from the studio, 1940’s Pinocchio. Unfortunately, World War II limited the number of international theaters that showed the film, and it was initially a box office bomb.

Troubles began right at the start of the release, at its premiere at New York City’s Center Theatre on February 7, 1940. To add excitement to the event, the publicity department hired 11 dwarfs to dress in Pinocchio costumes. They were hoisted atop the marquee, where they were expected to dance around and wave to the children below.

The merry group was plied with booze, and by the afternoon, they’d all stripped nude and begun a raucous game of craps. They refused to put their clothes back on or come down. Eventually, the police were summoned to drape them with pillowcases and drag them from the marquee.