Since the release of countless films based on the Marvel superhero in recent years, it seems impossible to go very far without seeing ads for Spidey toys, games, and cartoons. As a result, most people think they’ve got the web slinger figured out, but there’s much more to Spider-Man than what has been committed to celluloid. 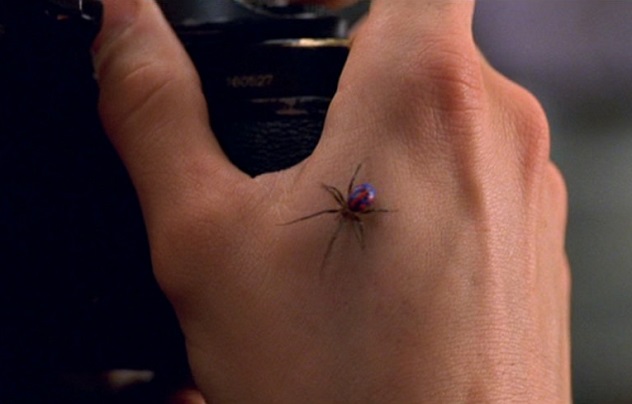 Even those who have never cracked open a Spider-Man comic can tell you his simple origin story: A bite from a radioactive spider gave him supernatural arachnoid powers. According to Spider-Man scribe J. Michael Straczynski, best known for his beloved Babylon 5 television series, that’s actually incorrect.

In Straczynski’s run on the comic The Amazing Spider-Man, he introduced a character named Ezekiel who seemed to have all of Spider-Man’s powers. According to Ezekiel, the radiation didn’t give that famous spider special properties. Instead, the radiation simply killed a spider that was already imbued with mystical powers. This story posits that Spider-Man is a “totem” of the spider, destined to battle not only those pretending to be totems (hence, all of the weird animal-themed bad guys he fights, like Doctor Octopus) but a monstrous creature named Morlun that is the natural predator of such totems. While Straczynski leaves it up to the reader to interpret the truth of Ezekiel’s words, it is interesting to imagine that Spider-Man is not the result of a freak accident but part of a—ahem—larger web of mystical destiny. More than any other comic, Spider-Man represents the essential dilemma of Marvel’s writers. On one hand, veteran readers of the books expect the writers to shake up the status quo, but because there is always another Spider-Man adaptation around the corner, the company wants the comic to be accessible to new readers. For this reason, Spider-Man’s stories have hit the proverbial reset button quite a few times.

The most egregious example of this is the infamous “One More Day” story. Those who only know Spidey from the movies would barely recognize the hero: He had long since married Mary Jane and recently supported Iron Man’s call for superhero registration by unmasking himself in front of the whole world. The Kingpin, having learned Spider-Man’s identity, hired someone to kill Peter Parker, but Aunt May ended up wounded instead.

When the heroes of the world couldn’t save her, Spider-Man turned to Marvel’s equivalent of the Devil, Mephisto. Mephisto agreed to save May’s life and even make the world forget Peter Parker, but it came at the price of erasing his marriage to Mary Jane. This allowed the narrative to fit the one familiar to new readers, but this awkward story was reviled by fans and creators alike, and the latter claimed that Marvel essentially forced them to write the story. 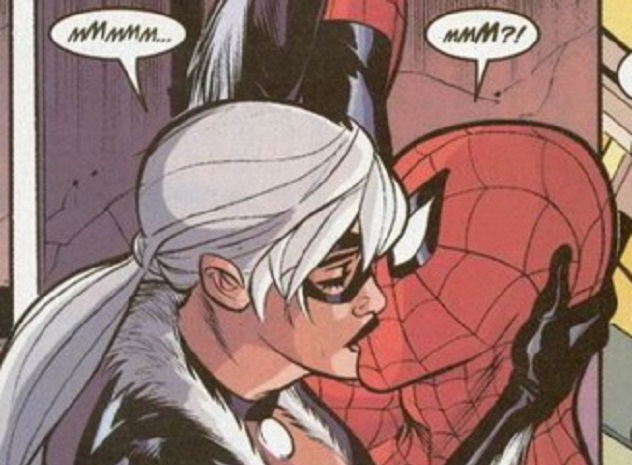 The franchise often goes out of its way to portray Peter Parker as he originally appeared: a wimp who most ladies prefer to ignore. However, Peter’s love life has been surprisingly full. For instance, prior to his well-known romances with Mary Jane and Gwen Stacy, he was the object of Liz Allen’s affections, though his life as Spider-Man kept him from properly dating her.

After his relationship with Gwen Stacy was cut short by her death, Spider-Man dated Mary Jane, the most well-known of his flames. However, their relationship had some breaks over the years, allowing Peter to indulge his inner Batman by starting a hot and heavy relationship with Black Cat. His most recent girlfriend was police officer Carlie Cooper, who figured out his true identity and continued to help him even after they broke up. These are just the serious girlfriends: This list doesn’t include the comely co-eds at Empire State University (where he worked as an assistant), Betty Brant (his boss’s secretary), or his roommate’s sister.

7He’s Not Always Himself 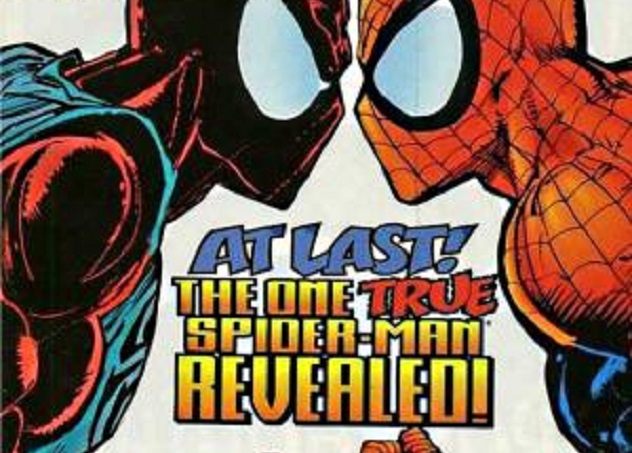 In the ’90s, Marvel decided to shake things up by revisiting a Spider-Man plot from the ’70s involving a mad professor of Peter’s who created a Spider-Man clone. The clone apparently died, but he reappears two decades later as The Scarlet Spider.

Things get weird when the story hints that this “clone” is real, and the Peter we know and love is, in fact, the clone. In the ensuing fiasco, Peter loses his powers, impregnates Mary Jane, and moves to Portland before it was cool. Ultimately, the status quo for Peter as a New York hero is restored when the comic reveals that the clone shenanigans were just another one of The Green Goblin’s plots.

Following reader outrage at the baffling story line, Marvel Comics filed for bankruptcy at the end of 1996. Luckily for them, Marvel only stays dead as long as the characters they write. 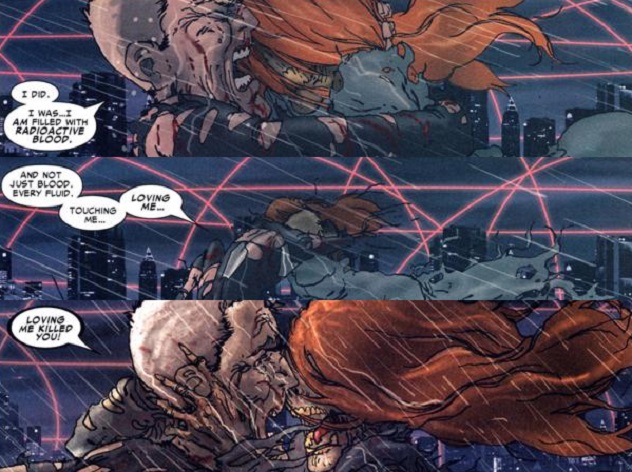 Normally, when Peter Parker frets that Spider-Man is likely to kill those closest to him, it is simply an emotional metaphor. However, in the Spider-Man story line “Reign,” a Dark Knight Returns homage that shows an aged Spidey returning to fight a corrupt city, the metaphor gets a little too literal.

At one point, Spider-Man must confront the body of Mary Jane, who has long since died. The story gets strange when Spidey reveals what killed her: Contrary to the totem story line, Spidey claims she was killed by his radioactive sperm. Spider-Man even gives us all the gory details: “Like a spider, crawling up inside your body and laying a thousand eggs of cancer . . . I killed you.”

It is at this point that an otherwise amusingly divergent alternate reality becomes completely baffling. Had Gwen Stacey been doomed to die of cancer, too, before her run-in with The Green Goblin? Will Black Cat one day perish from her dalliances with Peter? At the very least, this disturbing revelation takes the fun out of singing “He’s got radioactive blood.”

5He’s More Of A Team Player Than You Think 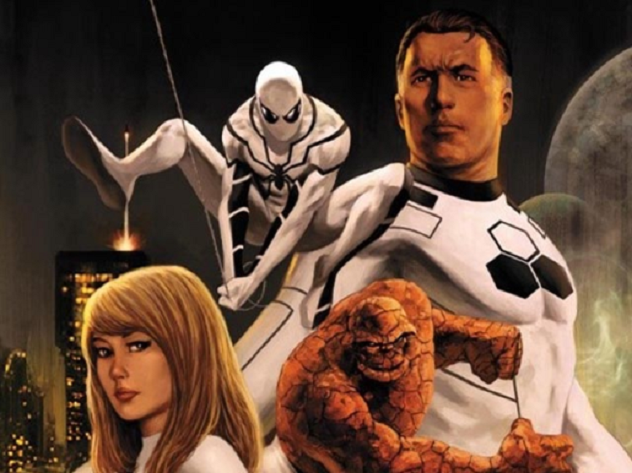 In addition to a preference for cat women, there’s another trait Spider shares with Batman: The writers can’t figure out if he’s more of a team player or lone wolf. After all, readers were supposed to believe that Batman was simultaneously an urban legend whose existence few could prove and a well-known member of an international team of heroes.

While the flamboyant Spider-Man has never stuck to the shadows as much as Batman, many of his major story lines and almost all of his modern movies have emphasized that Peter is generally a loner. He may get emotional support from his aunt and girlfriends, but he almost always has to face the villains by himself. However, Spider-Man has been on more teams than your average hero.

In his debut comic, he tried to join the Fantastic Four, and he succeeded years later as part of a “New Fantastic Four” that included Wolverine, Ghost Rider, and The Incredible Hulk. He temporarily hooked up with a crew called The Outlaws that consisted of Sandman, Puma, Prowler, and Rocket Racer. He has been an on-again, off-again member of The Avengers and has helped almost every hero in the Marvel universe through the Marvel Team-Up comic. He’s hardly a lone wolf, is he? 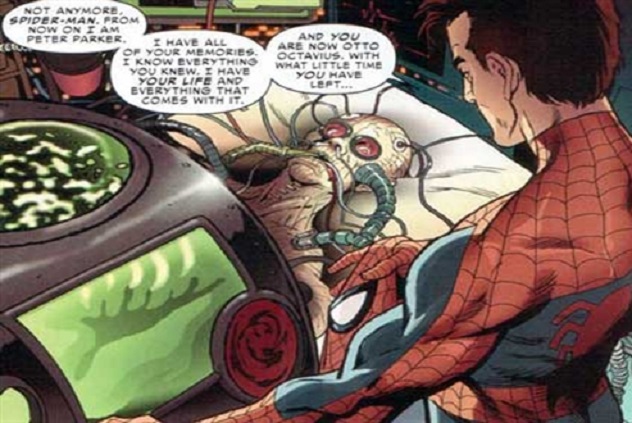 One of the most recent Spider-Man story lines has also been one of the most controversial. During battle with a dying Doctor Octopus, the villain used his own groundbreaking technology to place his mind inside Spider-Man’s body. This is par for the comic book course—heroes and villains alike are mind-controlled by their foes on a regular basis.

What made this situation different is how seemingly permanent it was. Doc Ock successfully cast Peter’s mind out of his own body, and an entire year of Spider-Man comics was devoted to the Doctor’s attempt to be a “superior” Spider-Man. In some cases, this worked out for the best: While driving Spider-Man’s body, Doc Ock helped Peter Parker finish a PhD and found his own company. He also gained the ire of groups like The Avengers for his overly brutal and sometimes even fatal brand of vigilante justice, though.

Thankfully, everything worked out. Faced with the prospect of The Green Goblin destroying everything he had created, Doctor Octopus sacrificed his own mind and life to restore Peter to his own body, just in time for Spider-Man to save the day. 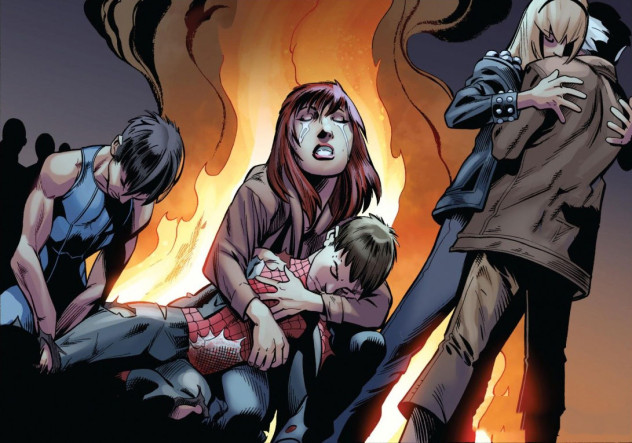 In the late ’90s, after recovering from that clone fiasco and subsequent brush with bankruptcy, Marvel came up with a fairly ingenious solution to their problem of catering to readers both old and new. They created a new comics universe, the “Ultimates,” which modernized these characters and rebooted their stories. For veteran readers who wished to read about the Peter Parker who had been Spider-Man since he was 15, there were the regular comics. For those who wanted fresh tales of a teenage Spider-Man, there was Ultimate Spider-Man.

The comics were a runaway success. In fact, the first Spider-Man movie borrowed heavily from the Ultimate Spider-Man comics, and the current crop of Marvel movies were all culled from that same universe, including the controversial casting of a black Nick Fury. The best thing about these comics is the creative risks the writers could take, free in the knowledge that the regular Marvel Universe was unaffected.

Perhaps their biggest risk was actually killing Spider-Man. After fighting The Green Goblin one last time and saving his neighborhood, Peter dies from his wounds, and his identity is revealed to the public. The most moving scene of this story line happens when Iron Man’s Tony Stark, who had been training Spider-Man, is driving Aunt May to the funeral. She expresses her wish that it be a small service, but an apologetic Stark shows her the thousands of New Yorkers who came to honor Spider-Man’s death.

2He Does Get Other Jobs 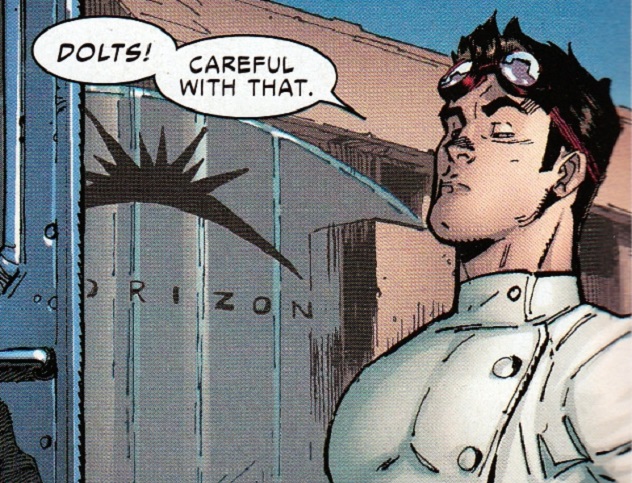 If you watch enough Spider-Man movies and cartoons, you’ll eventually wonder about Peter Parker’s financial situation. How can a freelance photographer possibly manage to afford to live in the pricey borough of Manhattan?

In the comics, Spider-Man has actually held many other jobs over the years, with steadier pay. While J. Michael Straczynski was wielding the pen, Peter took a job as a high school science teacher. During Dan Slott’s time writing the hero, he got a very prestigious job working as a scientist for Horizon Labs, where it was revealed that he used the job to provide Spider-Man with crime-fighting equipment. He even started his very own company while his body was under the control of Doctor Octopus. While the infamous bad luck that follows him may take it away at any moment, it currently seems like Peter’s days of living from photo to photo are long behind him. 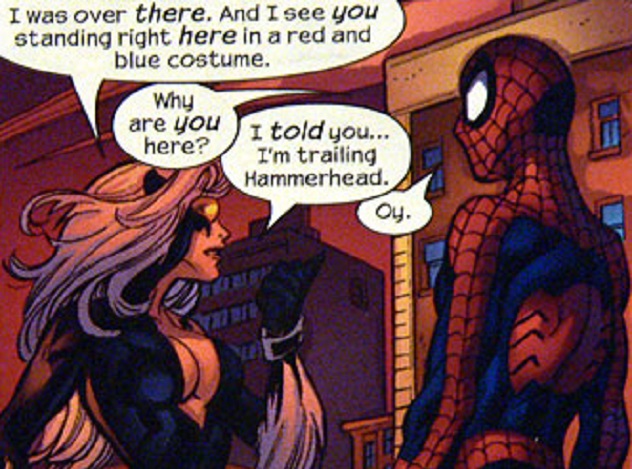 Marvel has steered clear of any open religious affiliation when it comes to their most beloved hero, perhaps very wisely. However, for those reading behind the lines—or, in some cases, just reading the lines themselves—there are a number of interesting clues.

Spider-Man has been written by a number of prominent Jewish writers, including comic legends Peter David, Brian Michael Bendis, and of course, creator Stan Lee. His dialogue is often littered with traces of Yiddish, such as remarking “oy” to convey his exasperation. Avi Arad, producer of Spider-Man and The Avengers, commented that he thought it was clear that Stan Lee had drawn upon his own experiences to portray the Parkers as a Jewish family trying to forge a new identity in the city. Andrew Garfield, the Jewish actor portraying the most recent incarnation of Spider-Man, believes that the neurotic good son who never thinks he has done enough to help everyone represents Jewish culture.

Chris Jenkins reads way too many comics to maintain his English professor cred. If you’d like to tell him this list is neither amazing nor spectacular, hit him up on Twitter.