Birds have always migrated, but humans haven’t always completely understood what was going on. We could certainly see the massive flocks journeying across the skies, but it was anyone’s guess as to why. Not surprisingly, some remarkable ideas and stories about migrating birds have come about through the ages.

These erroneous beliefs were largely based simply on observation, and some of them were downright ludicrous. From swallows burying themselves in the mud to geese flying to the Moon, here are some of the strangest myths about migrating birds, and some amazing facts to put it all in perspective. 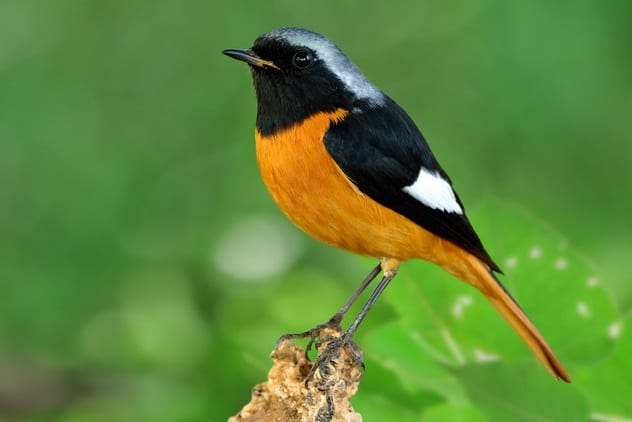 The Greek philosopher Aristotle noticed that redstarts and robins never seem to be sighted at the same time. Of course, this is because redstarts migrate in winter, but he didn’t know that at the time, so he attributed the disappearance of the redstarts to a “transmutation,” or metamorphosis, of the redstarts. He believed they turned into robins during winter and then back into redstarts in the summer.[1]

More than likely, Aristotle was inspired by the change from winter to summer plumage seen in other birds, because it wouldn’t be that crazy to compare the red tail of the redstart to the red breast of the robin. He also thought that garden warblers morphed into blackcaps. We forget that it was probably a real mystery to people in the past and that they really thought this made sense according to what they were seeing. 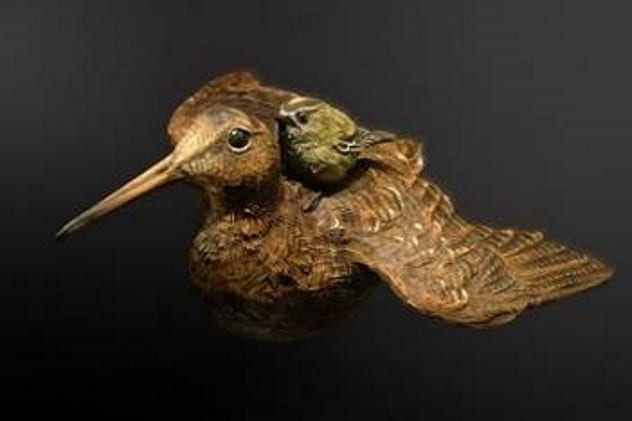 Goldcrests are very tiny birds with a brilliant gold stripe on their heads. In autumn, thousands of them migrate from Scandinavia to the UK. At the same time, another bird called the woodcock migrates along the same route. Because of this, some people used to believe that the goldcrests would sit on the backs of the woodcocks to cross the North Sea, assuming that the goldcrests were just too tiny to make such a stormy crossing on their own.

In Yorkshire, the goldcrests earned the name “woodcock pilots” in reference to this belief.[2] It’s amazing to think that people really thought that a goldcrest would sit on the back of another bird and give directions. 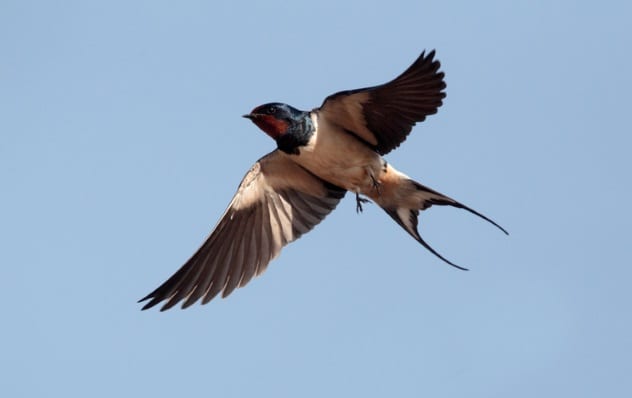 Swallows are migratory birds that spend the summer in Europe and the winter in Africa. They can manage to fly about 300 kilometers (186 mi) per day to get to South Africa in just five weeks. The author of a book about nature in the 1700s, Gilbert White, made the interesting assumption that swallows probably dived underwater in September and buried themselves in the mud. Again, it seemed unlikely to people back then that such a seemingly fragile little bird could fly all around the world without any assistance, so it perhaps made more sense without further knowledge that the swallows would spend the winter torpid underground.

Many people believed this theory for a surprisingly long time.[3] When bird banding, also known as bird tagging or bird ringing, was invented, it made it clear that the tags were not rusting or fading, as they naturally would underwater or in mud, and people were finally convinced that swallows did actually migrate rather than hibernate.

12 Flying To The Moon 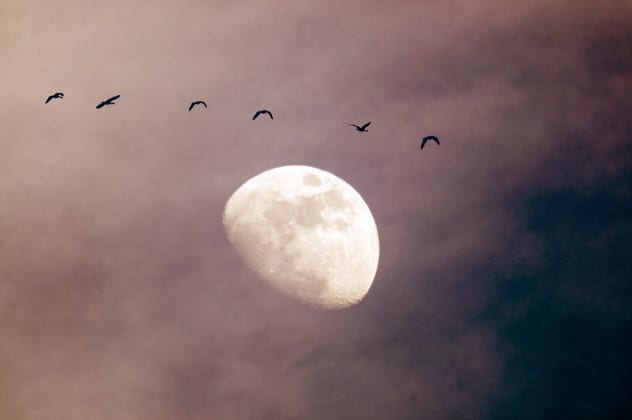 Perhaps the most outlandish of all theories is attributable to Charles Morton, a 17th-century English scientist. He reasoned that since nobody seemed to know or see where migratory birds actually went, they must be leaving the planet. He believed that birds migrated to the Moon and then, of course, came back again.

While many birds can and do migrate many thousands of miles, approximately 385,000 kilometers (239,000 mi) twice over without any oxygen might be expecting a little too much.[4] 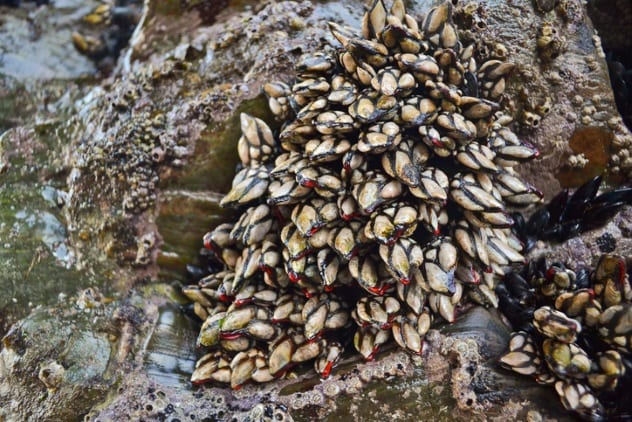 In the same sort of league, Olaus Magnus wrote that ducks hatched from trees. He believed that there was a tree which bore fruit, and when the fruit was ripe and fell into the sea, it split open to bring a new duck into the world. Again, the fact that this was never actually seen in real life did not persuade him that it wasn’t true. 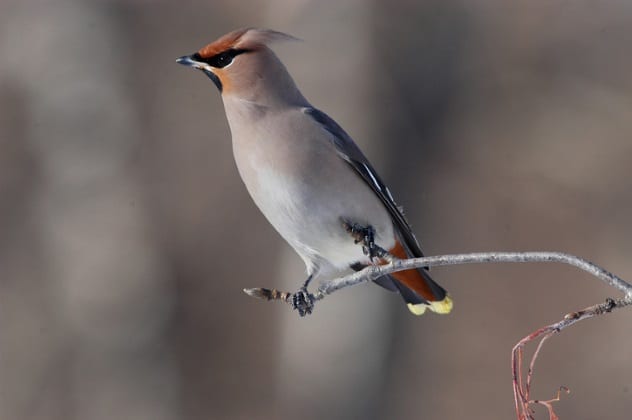 Waxwings only visit the UK every few years, probably largely dependent on food availability. People used to find this alarming because they thought that the arrival of the waxwings must be a bad omen.[6] At the very least, it was considered to mean a particularly cold and harsh winter, and in 1914, it was speculated that the waxwing migration predicted the beginning of World War I. 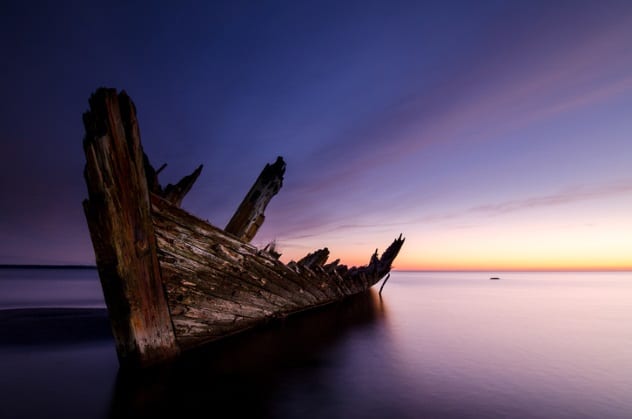 Pliny the Elder wrote that migrating quails would land en masse at night on ships and cause the vessels to sink.[7] Whether he meant that they did this on purpose or by accident is not really clear. It’s much more likely that the ships were sinking because of structural problems, and the quails were landing on them afterward to take a rest from their long flight. It would take an impossible number of quails to be heavy enough to sink a ship!

This was, however, the same person who suggested that there was a population of miniature humans in Africa known as pygmies who regularly went into battle with another species of bird—the crane. The tale included the pygmy people riding on the backs of goats and sheep to face the cranes. In light of this, perhaps quails sinking ships wasn’t so wild. 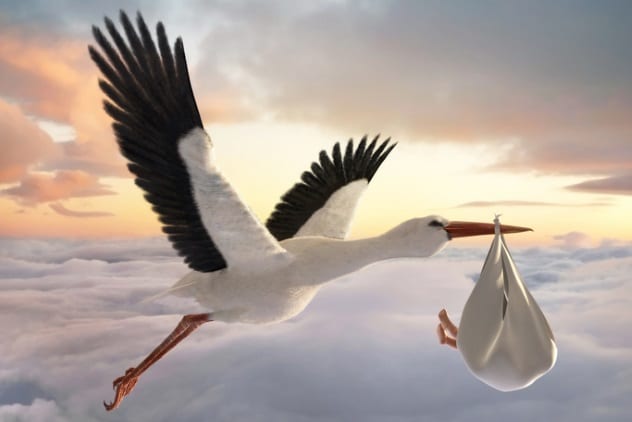 You are probably already well aware of the symbolic association between newborn babies and storks. There are many possible reasons for how the strange imagery of a stork carrying a baby in a bundle came to be, but the most interesting one is rooted in the stork’s migration patterns.

Storks migrate from Europe to Africa around the summer solstice and then return to Europe exactly nine months later. Traditionally, many people in Northern Europe got married in time for the summer solstice, the day of the year with the most hours of daylight. Of course, human gestation is nine months. As the storks returned in spring, it would be around the same time that babies were born from the previous summer’s marriages.[8]

7 Being Two Species At Once 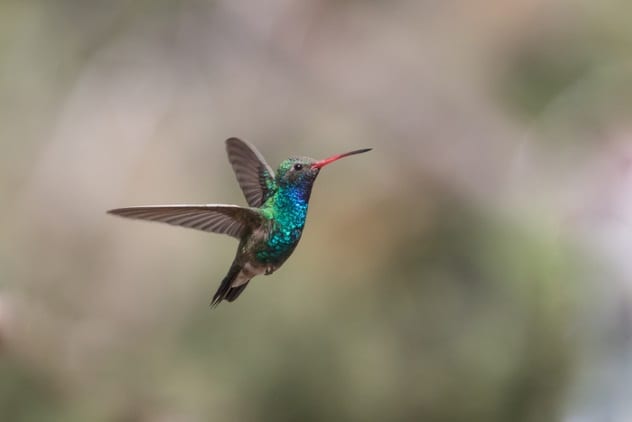 While the following myth isn’t strictly related to their migration, hummingbirds are migratory birds and have garnered a lot of mysterious legends around them. The Spanish queen Isabella received a report that hummingbirds are a cross between a bird and an insect.[9] That’s not a surprising mistake to make, considering species like the bee hummingbird, the smallest bird in the world, weighing in at just 1.6 to 1.9 grams. There is also the hummingbird hawkmoth to confuse the issue even further. Many people think they have seen a hummingbird when it is actually this moth, which has an amazing resemblance to a hummingbird. And even more confusingly, hummingbird hawkmoths migrate, too!

Hummingbirds were also erroneously believed to be too small to migrate by themselves, so they must “piggyback” on other larger birds, such as geese. Hummingbirds are, of course, perfectly capable of migrating all by themselves and can travel distances of 4,300 kilometers (2,700 mi) when migrating. 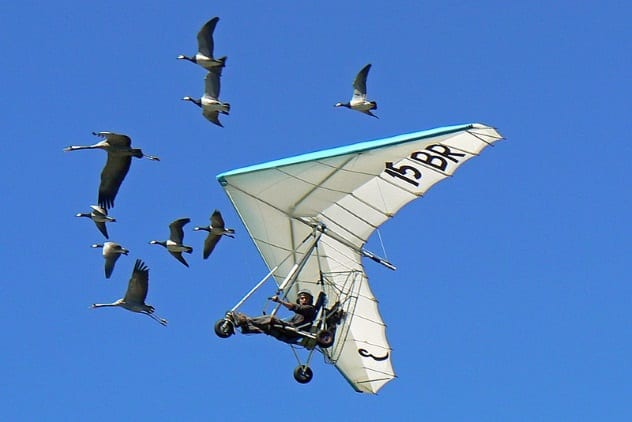 And now for something that is, remarkably, not a myth. Many orphaned birds have learned to migrate by being shown the way due to the efforts of kind humans. A former meteorologist from Sweden, Christian Moullec, brought up a flock of lesser white-fronted geese in 1995 and then took to the skies in a light aircraft to guide them onto their correct migration route.

He has been doing this every year since. The birds only need to be shown the way once, and then they will have the route stored in their memory. The process of imprinting on their surrogate human parent means that they will follow no matter what—even if it means following a microlight![10] 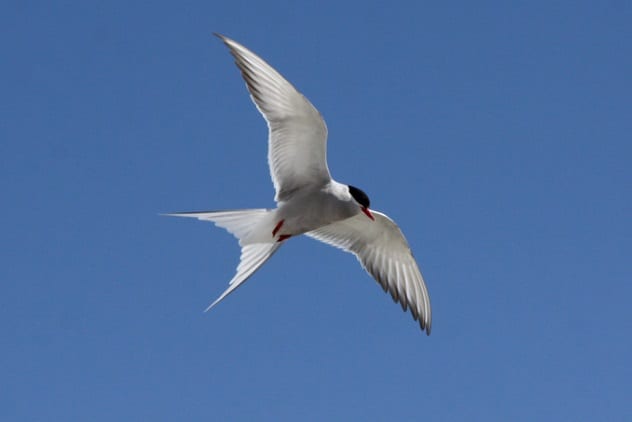 Arctic terns hold the record for the longest migration journey of any bird in the world. They fly approximately 70,900 kilometers (44,100 mi) on average from the Arctic to the Antarctic every year. One tern was recorded to fly no less than 81,600 kilometers (50,700 mi), which is like flying around the whole planet three times over![11] Another was recorded traveling roughly 90,000 kilometers (56,000 mi). 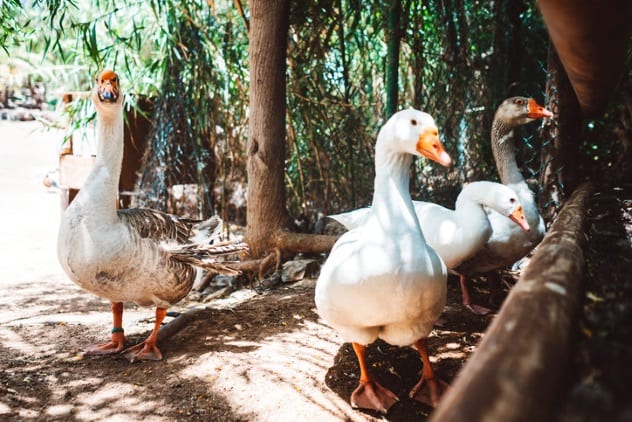 Even birds that live in captivity have been noted to become restless during their normal migration season. They often try to fly in the direction they would naturally migrate. These are birds that have never actually migrated and have been raised in captivity, showing that it is an automatic instinct in migratory birds to migrate, no matter what circumstances they are in.[12] 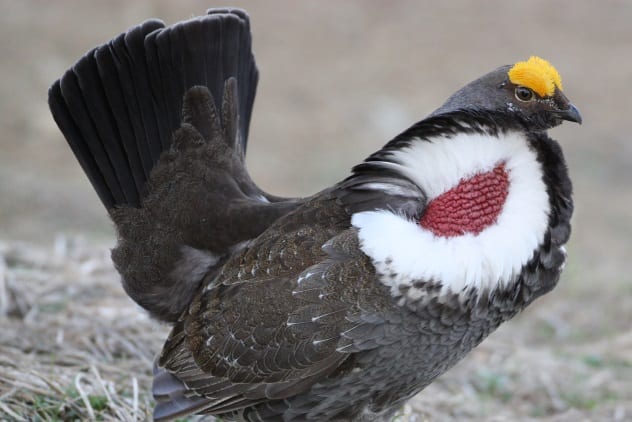 What is supposedly the shortest migration in the world is done by the North American dusky grouse (also known as the blue grouse). It feeds in the mountains in winter and then moves down into deciduous woodlands during the summer, essentially “migrating” about 300 meters (1,000 ft) in elevation. Does this count as a real migration? It’s a controversy.[13] 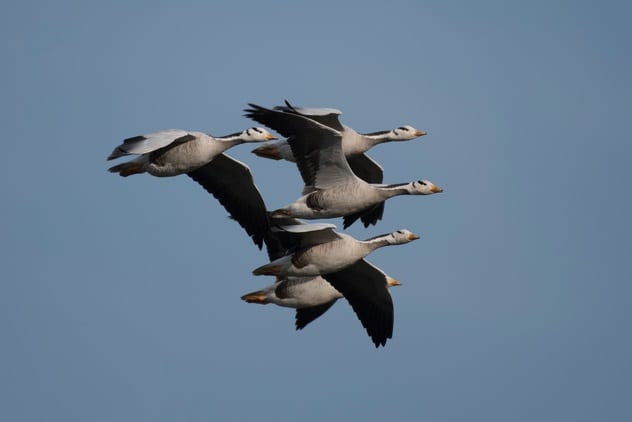 Bar-headed geese fly higher than any other bird while migrating. They can fly up to 8,851 meters (29,040 ft) above sea level. That means you could wave to them from your airplane window! For comparison, the highest a bird has ever been sighted was a Ruppel’s griffon vulture at 11,278 meters (37,000 ft). It was sucked into a plane’s engine. 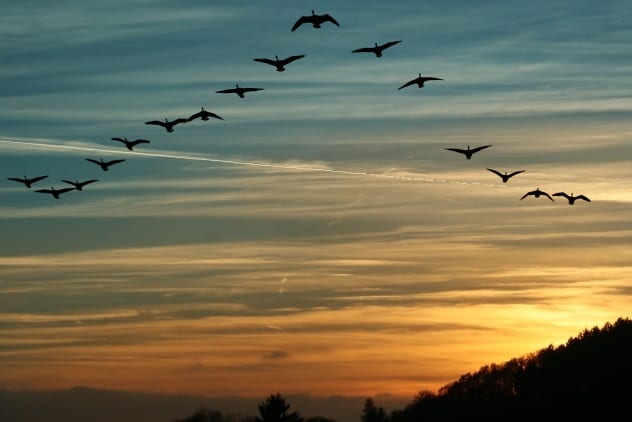 Having a big brain uses a lot of energy, and when you have to fly thousands of miles, you need all the extra energy you can get. Migratory birds actually have smaller brains than resident birds that do not migrate. The reason for this seems to be that migrating birds adapted to have smaller brains so that they wouldn’t use so much energy on thinking and can use more energy on flying.[15] If only we could shrink our brains before going for a run!

I like to write about nature, all things weird and wonderful.