There’s no doubt that we’ve figured out a lot about the cosmos, especially in the last century. But from black holes to pulsars, everything we find seems to bring just as many questions as answers. Astronomers don’t yet have all the answers, and every day heralds the arrival of a new discovery and a new cosmic mystery.

10The Nebula Of Uncertain Parentage 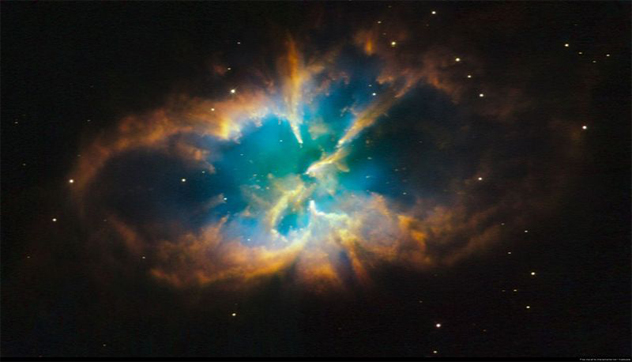 Planetary nebulae were discovered in the 1780s. The astronomer William Herschel believed that they were newly forming planetary systems. He was wrong, but the name stuck. They’re actually glowing clouds of gas around a dying star, and they’re often quite beautiful.

The nebula Sharpless 2-71 was discovered in 1946 and was believed to have formed around a bright star in its center. More recent photographs show that things aren’t that simple. Many planetary nebulae are bipolar, meaning that they have symmetrical clouds coming from opposite sides of their star—they’re often compared to an hourglass or a butterfly. Sharpless 2-71 is made of multiple bipolar lobes in different orientations.

There are three stars in the middle of the nebula. The brightest star is right at the center, so that was the original candidate for the nebula’s parent. Yet it doesn’t emit enough ultraviolet radiation to account for the nebula’s glow, whereas a smaller nearby star might. That star might also be part of a binary system, meaning that as many as four stars may be responsible for the structure.

Take a trip to the stars with Space: A Visual Encyclopedia at Amazon.com!

9The Neutron Stars That Look Too Old 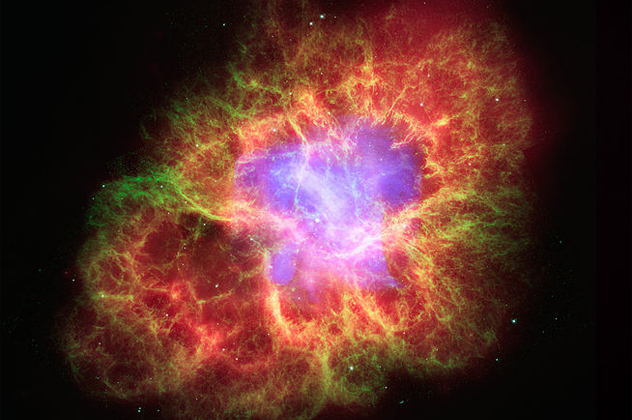 When a massive star goes supernova, it often leaves behind a massive cloud of debris. RCW103 is one such body, located around 10,000 light-years from Earth. At its center is a neutron star—an extremely dense object that weighs more than the Sun, but is only tens of kilometers across. They’re quite common in the debris of a supernova, but RCW103’s neutron star is unusual.

The neutron star in the center is spinning with a period of 6.7 hours per rotation. Since a star’s rotation speed slows down over time, this would normally put this particular neutron star’s age at several million years. However, the parent star went supernova around 2,000 years ago. The variation in the neutron star’s X-rays are also unusually large, so something is going on.

One theory is that another star that’s too dim for us to see is orbiting around RCW103. Its magnetic field could be slowing the neutron star. At the same time, gas may be flowing onto the neutron star and causing the changes in its X-rays.

The same puzzle exists for a pulsar known as SXP 1062. It rotates once every 1,062 seconds, which would normally require it to be much older than the 40,000-year-old debris around it. Astronomers don’t know if it was born slower than normal, or decelerated rapidly. Scientists hope a clue may be hidden in the data they already have. 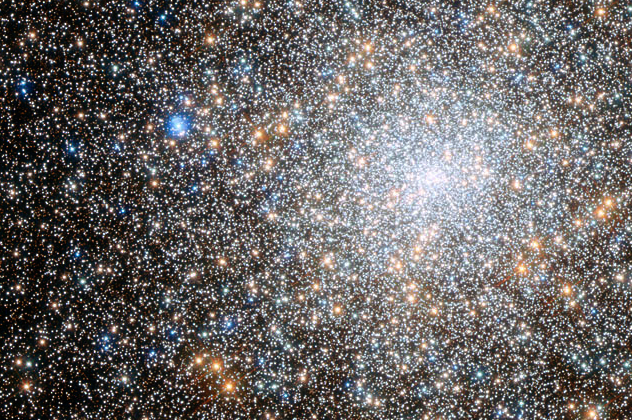 The stars of the Messier 15 globular cluster are unusually bunched in its center. The first mystery of the cluster is what’s pulling them there. It could be a bunch of dark neutron stars, though the most likely candidate is an intermediate-mass black hole. Yet even if that’s confirmed, it just leads to more mysteries.

There are three ways a suitable black hole may have formed. There could’ve been several of them of around the mass of the Sun which collided to create a much larger object. Or massive stars could’ve collided before collapsing into a black hole. Alternatively, an intermediate-mass black hole could have been created during the Big Bang. If M15 has one, its origin is a very open question. 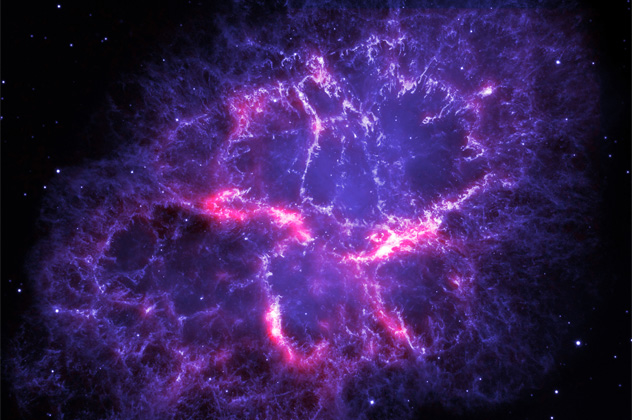 The Crab Nebula is a remnant of a supernova 11 light-years across that only looked like a crab to someone in 1840 whose telescope was too small to make it out properly and, as with the planetary nebulae, the name stuck. Until 2011, it was thought to be one of the most steady sources of light, radio, and gamma radiation in the sky.

But between 2007 and 2010, astronomers from different observatories detected three powerful gamma ray flares with no change in other wavelengths. This was described by one astronomer as a “big puzzle,” while another called it a “real mystery.” The unexpected flares were the first seen from a nebula and were five times more intense than any other yet observed.

The rays are caused by the nebula accelerating particles with 1,000 times more energy than the Large Hadron Collider. The mechanism behind the acceleration is the key to the mystery. Of course, solving that mystery is easier said than done. One theory is that it has to do with the sudden reorganization of magnetic fields around the Crab Pulsar, the neutron star at the center of the nebula. 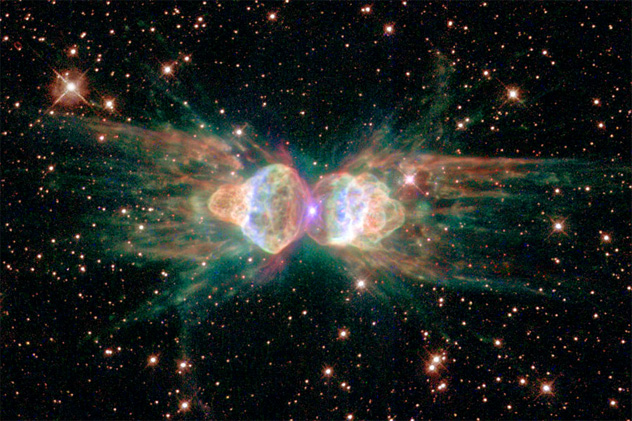 It’s not just the jumbled bipolar nebulae in Sharpless 2-71 that pose a mystery to astronomers. Scientists used the Hubble to examine 130 such objects in the central bulge of the Milky Way and found something weird. The nebulae were in different places, formed at different times, and have never interacted. Yet despite that, most of them appear to be aligned along the same axis.

The nebulae were found to have their long axis aligned with the plane of the galaxy. As the name implies, the lobes of the nebulae emerge from the north and south poles of the stars. The alignment observed would only occur if the parent stars were spinning perpendicularly to the rotation of the galaxy, a behavior that was described as “very strange” by one of the astronomers behind the discovery.

The farther you get from the center of the galaxy, the more the pattern breaks down. One theory is that the stars may have been oriented that way due to magnetic fields when the bulge formed. That would suggest that magnetism has played a bigger role in the structure of the galaxy than previously realized. 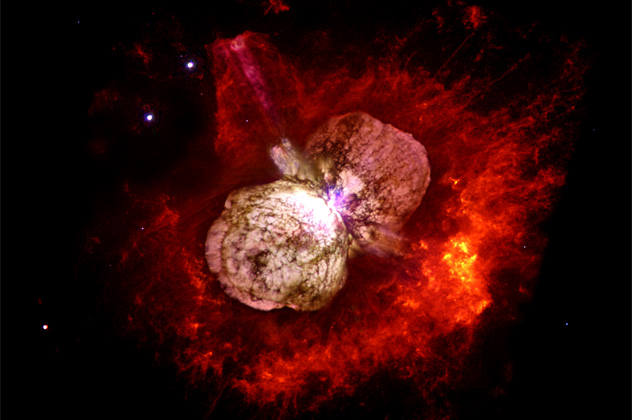 In 1838, the glow of Eta Carinae increased until it became the second brightest star in Earth’s sky. It stayed that way for 10 years before dimming and falling outside the top 100. This event was called the Great Eruption. It was caused by Eta Carinae losing 14 percent of its mass—equivalent to 10 of our Suns.

For a long time, the leading theory was that the mass was blown away by stellar winds. An analysis of the starlight could help confirm the idea, but none was done since spectroscopy was still in its infancy in the 1840s. While the light that came straight to Earth was lost to history, astronomers this decade were able to find rays from the eruption that had bounced off dust clouds before getting here.

When they analyzed the light, they figured out that the Great Eruption had burned at around 4,725 degrees Celsius (8,540 °F), too cold for the stellar wind explanation. This suggests that Eta Carinae’s chart climb was a unique event. Possibilities include a collision between two binary stars or a thermonuclear explosion in the star’s core.

Bring a piece of the cosmos into your home with this stunning Helix Nebula Poster at Amazon.com! 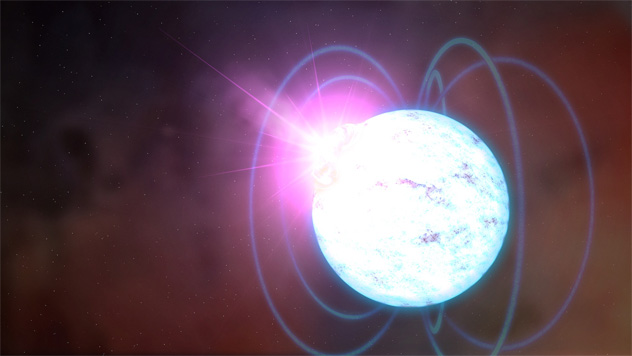 Magnetars are a type of neutron star with a magnetic field quadrillions of times stronger than Earth’s. They’re the most powerful magnets in the universe. They were only theorized in the 1990s and they’re filled with properties that we still haven’t figured out.

A common feature of magnetars is the “glitch,” an event that causes a sudden increase in spin. Scientists have seen hundreds of glitches and have a plausible model for how they occur based on the frictionless neutron superfluid believed to be at their center. On April 28, 2012, astronomers witnessed the first sudden slowdown from a magnetar, 1E 2259+586. It’s been dubbed the anti-glitch. It was wholly unexpected and doesn’t fit into any current theories.

There are clues that may help. A week before its anti-glitch, the magnetar unleashed an intense burst of X-rays that is most likely connected to the slowdown. On top of that, all neutron stars are slowing in their spin over time at a constant rate. This is known as spin-down, and 1E 2259+586 has been slowing more rapidly since the anti-glitch.

One mystery that was recently solved was the existence of CXOU J164710.2-455216 in the cluster Westerlund 1. The supernova it came from was around 40 times the mass of the Sun, so it shouldn’t have left anything but a black hole. The leading theory was that there had been a binary system which interfered with the normal mechanisms. Scientists found a “runaway” star nearby that looked exactly as predicted. 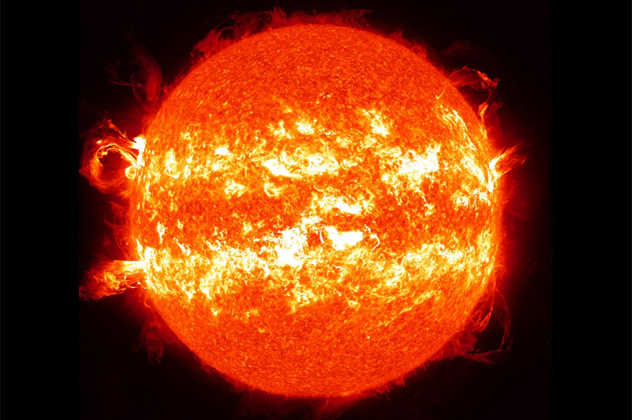 Around a third of Sun-like stars have year-long periods of varied brightness as they approach the ends of their lives. Christine Nicholls, an astronomer from Mount Stromlo Observatory in Australia, led a study into the decades-old question of why this happens. The conclusion was clear, and told us exactly what we already knew: “All the possible explanations for their unusual behavior just fail.”

Nicholls’s team monitored 58 stars for 2.5 years. A leading theory for the variations was stellar pulsations, in which the stars grow and shrink. That option was discounted, along with the possibility that the stars were in binary systems. However, the team did discover a new clue—the changing stars eject clumps of mass during their transitions. Unfortunately, clues are useless without the right detective, and Nicholls said that “a Sherlock Holmes is needed to solve this very frustrating mystery.” 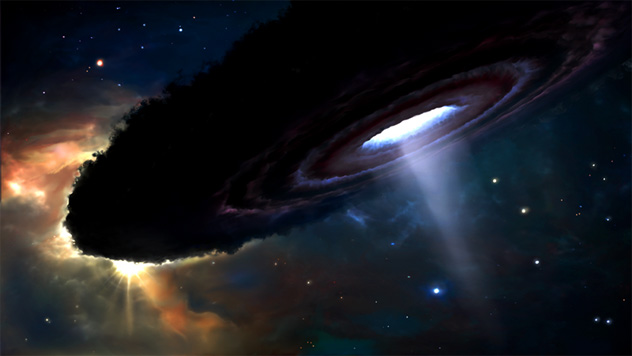 A lot of questions have recently been answered about one of the oldest mysteries in astronomy—the eclipse of the star Epsilon Aurigae. Every 27 years, it dims for around 18 months. Since the 1820s, scientists have offered all sorts of suggestions, from black holes to huge stars. Observations from the most recent eclipse, which began in 2009, suggest a binary system made of a dying star and another star that’s surrounded by a giant disk of material.

Yet despite figuring out what’s there, it leaves the question of why. The disk in question is made of gravel-sized particles. It’s the sort of debris field normally found in much younger star systems. The recent observations were crowdsourced as part of a citizen science project. There may be enough information in them to figure it out—or we may have to wait another few decades. 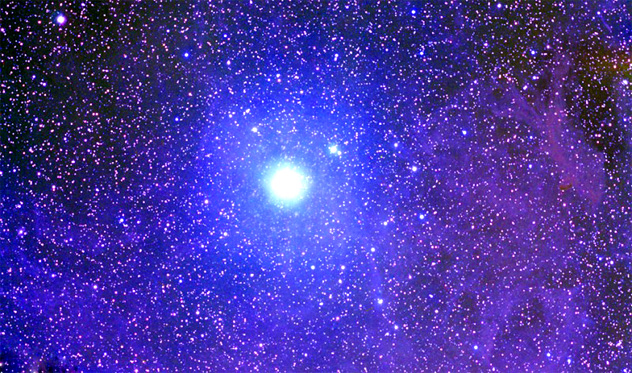 The North Star might be the most famous one in the Northern Hemisphere, but despite its great cultural significance, there’s a lot we don’t know about it. The most recent questions around the star were revealed in a paper with the wonderfully exciting title The North Star Mysteries: The Remarkable Brightness Increase of Polaris from Historical and Modern Observations.

The researchers behind the paper discovered that Polaris has been getting brighter over the last century. Today, it may be as much as 4.6 times brighter than it was when observed in ancient times.

Yet perhaps a more pressing unsolved question is how far away from us Polaris actually is. Measurements from the 1990s gave a figure of around 434 light-years. However, it’s been described as having “certain anomalies that have so far defied a straightforward interpretation.” More recent measurements by different methods have suggested that it may be more than 100 light-years closer than we’d initially thought.

Then again, by the year 3000, Polaris will no longer be the North Star. That title will go to Gamma Cephei. We know where that is. If we haven’t figured it out before the handover, scientists will have another 25,000 years to work out Polaris’s distance before it gets its job back.