There’s no clear line between passion and obsession, but some people are so deep into the latter that there doesn’t need to be. Some men put their entire lives into building something, and the results are astonishing.

Some people build sculptures, while others build houses. Ra Paulette digs cathedrals into mountains. Over the last 25 years, he’s carved immense and intricately decorated caves into the sandstone of New Mexico, working completely alone. He only uses manual tools, including a pickaxe, a shovel, and a wheelbarrow. He’s completed 14 of these structures, one of which you can buy for $995,000.

If the price tag doesn’t give you a sense of scale, pictures will come closer. The spaces created by Paulette justify the word “cathedral” in both scale and beauty. The walls, which never stop curving, are adorned with seashells, leaves, and patterns that are hard to define yet captivating. He doesn’t plan his digs in advance but says “I can feel the empty space.”

Almost as famous as his caves is Paulette’s stubborn streak. His relationships with clients are so notoriously difficult that they were the focus of an Oscar-nominated documentary. Having become fed up with being used as a “paintbrush” rather than an artist, he’s currently working on his final masterpiece in a secret location, a dream project he had attempted before but that collapsed two years into the dig. He expects it will take 10 years to complete.

See more wacky buildings just like these in Amazing Structures: Technical Wonders from Around the World at Amazon.com! 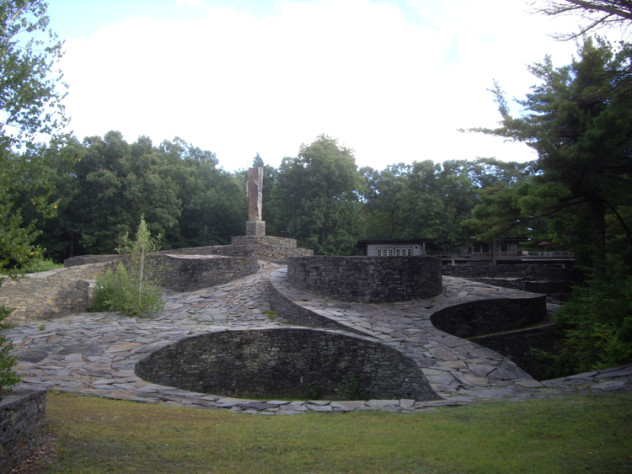 In 1938, a sculptor named Harvey Fite bought a disused bluestone quarry in New York for $250. The site had been abandoned after concrete killed the demand for the rock. Fite wanted it as a source of material for his work, but a trip restoring Mayan ruins in Honduras inspired Fite to do something different: turn the quarry itself into a piece of art.

The result was a 6.5-acre sculpture that one critic described as one of “the most beguiling works of art on the entire continent.” Fite worked for decades using nothing but hand tools to place rocks into a winding maze of walkways, at the center of which is a monolithic stone. It took Fite 12 years from spotting the stone to getting permission to take it from a nearby stream. Also nestled among the staircases and paths are an amphitheater and stream. It’s easy to understand why it’s become a popular location for weddings.

In addition to the sculpture, Fite also found time to build an adjacent museum. He gave his creation the name Opus 40 in 1972, as he believed it would take a total of 40 years for him to finish it. He died from a fall on the sculpture in 1976, after building for 37 years.

Not every artist is able to complete their vision. Australian artist Tony Phantastes spent six years working on a sculpture in Collector, a New South Wales town of around 400 people. In photographs, it doesn’t look very impressive, appearing to be little more than an ornate fence. But if you spot the staircase spiraling around one end or see a picture of someone standing beside it, the sense of scale becomes overwhelming. The entire structure is 7 meters (23 ft) tall and 24 meters (79 ft) wide.

According to Phantastes, the gate “wrote itself against the landscape.” Its curved shapes are designed to reflect the natural world around the gate, especially the nearby trees. In 1999, authorities became concerned about the sculpture’s structural integrity and ordered it demolished. After a legal battle, Phantastes agreed to make alterations to stop the demolition but was saddled with huge legal costs. It remains unfinished.

https://www.youtube.com/watch?v=TBobABSWshY
In 1945, Moussa Abdel Karim Al Maamari was a 14-year-old boy with a dream to build a castle. Mocked by his teacher and classmates, he got a job with his uncle restoring a fort in a nearby town. His enthusiasm earned him a real skill, and he spent the next 17 years renovating castles and palaces. In 1962, he bought a plot of land and 6,000 rocks before spending the next 60 years handcrafting a castle.

Many of the blocks are decorated with carvings of keys, the Sun, animals, and other symbols. Moussa’s skill and experience is obvious. The castle features a moat and drawbridge, but inside is where the spectacle literally comes to life as animatronic figures recreate scenes of Lebanese life from the 19th and 20th centuries. Among them is a recreation of Moussa being chastised by his teacher for drawing a picture of a castle in class and told he’ll never amount to anything. 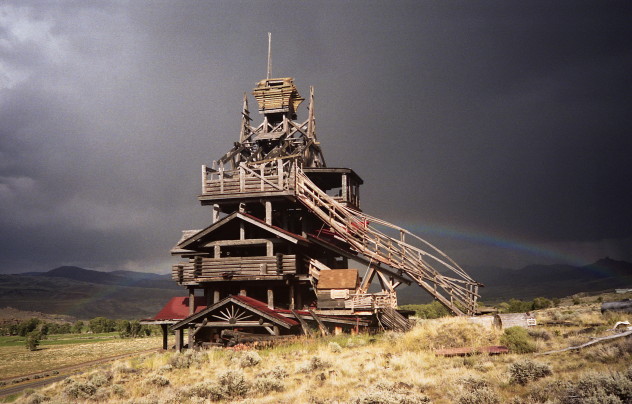 The Smith Mansion in Wyoming is nicknamed the “crazy house.” One look at the five-story building, located around 24 kilometers (15 mi) from Yellowstone, makes it clear why. If a building were put together to embody disorganization, this would be it. It looks like a pagoda in the midst of collapse.

The house has become a part of local folklore. There are all sorts of rumors as to its purpose, from volcano lookout tower to a vision that came to a madman in a dream. People who knew the builder, Francis Lee Smith, insist he was an artist and “there was nothing crazy about him.” It started as a family home and kept on growing, becoming Smith’s obsession.

The building’s frame is made from pine that Smith salvaged after a wildfire, and the flooring was once part of a high school gymnasium. Smith worked without a plan. The house has no dedicated bedrooms but does have a miniature basketball court built for Smith’s son. Smith slept in a giant swing suspended from the ceiling in the part of the house buried in the hillside.

Smith was killed when he fell from the roof in 1992. The house soon fell prey to vandalism and the elements, but Smith’s daughter recently set up a project to preserve it and turn it into a museum.

Step through the door of one of the most disturbing houses ever imagined. Buy House of Leaves at Amazon.com! 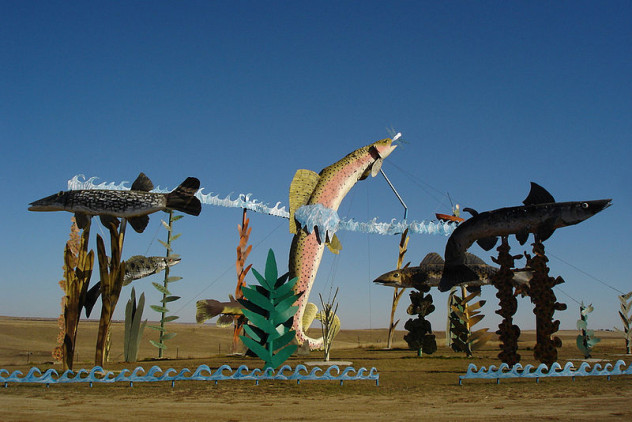 Regent is a small town in North Dakota with a population around 160, having peaked at just over 400 in the 1950s, but one resident isn’t going to let the town die without a fight. Gary Greff is a retired schoolteacher who decided to save the town by single-handedly turning it into a tourist destination in 1990.

Despite having no metalworking experience, Greff built 10 huge metal sculptures along the highway into Regent, earning it the name “Enchanted Highway.” The sculptures include a tin family, a giant metal grasshopper, and Teddy Roosevelt on a horse. Greff earned the record for the world’s largest metal sculpture with a piece named Geese in Flight. The depiction of Canadian geese is 33.5 meters (110 ft) tall, half again as wide, and weighs over 71 metric tons.

Greff added picnic areas and playground equipment around his sculptures, maintains the parking lot and fences, and even cuts the grass himself. Recently, he converted Regent’s closed elementary school into a castle-themed inn, complete with drawbridge and suits of armor. He’s still sculpting and has no plans to halt his personal urban transformation project. “This will all end when it ends, but by then, I’ll be pushing up daisies,” he said. 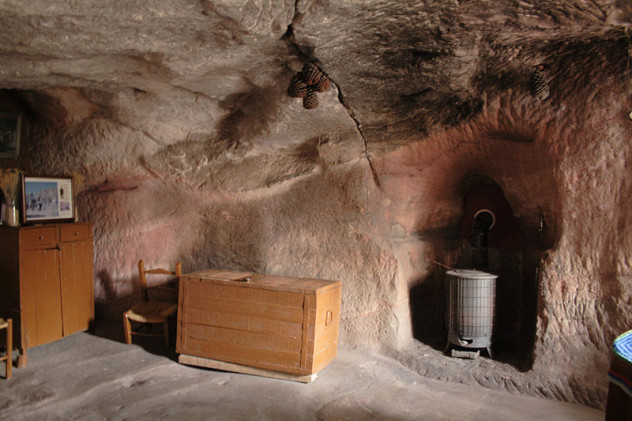 In 1907, a stonemason named Lino Bueno was hired by the town of Alcolea Del Pinar to excavate blocks of limestone for use in public buildings. He worked for seven years, and in that time, he created a space large enough for a family to call home, so he moved in with his wife and five children.

Over the next 20 years, he continued to expand, carving a kitchen and two bedrooms into the limestone. His work caught the attention of Spain’s King Alfonso XIII, and Bueno was awarded a Medal of Merit for his display of hard work and citizenship. He kept on carving until the moment he died in his eighties. The house became a refuge during the Spanish Civil War, and a commemorative plaque was placed on the house by King Juan Carlos in 1978. 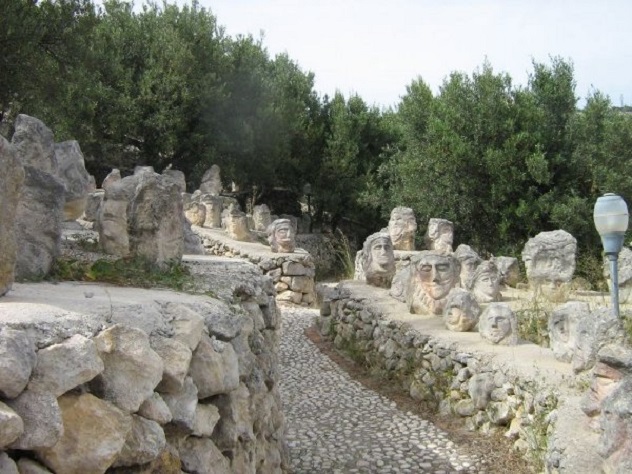 Filippo Bentivegna was a Sicilian immigrant who arrived in the US in 1913 looking for work. Around six years into his stay, he was involved in a quarrel and received a blow to the head. The injury impacted his mental state and left him unable to work. In 1919, Bentivegna was shipped back to Italy only to be tried for desertion for not fighting in World War I. He was spared jail time after being declared mentally ill and used his savings from America to buy a farm.

On the farm, Bentivegna began to carve. He carved every rock on his farm into a head. When he ran out of rocks on the surface, he dug caves into the ground and carved heads into the walls. He carved faces into the olive trees. He produced thousands of faces, for seemingly no reason. His obsession gained him a reputation as a madman but also some celebrity.

Despite numerous offers, he adamantly refused to sell any of his heads. While some of his work has been moved to a museum since he died, most of it is still in place and has become a tourist attraction nicknamed “The Enchanted Castle.”

When Pearl Fryar moved to Bishopville, South Carolina in 1982, he wasn’t yet a tree sculptor. While they were looking for houses, Fryar and his wife, who are African American, were denied a particular home due to the racial stereotype that they wouldn’t keep their yard tidy. Fryar had no horticultural experience but was determined to prove them wrong by winning a local “Yard of the Month” award.

It quickly became a passion, and in the past 30 years, his garden has become a global attraction with over 300 plants. He’s spent years growing plants into beautifully intricate shapes, following his instinct. His message, “Love, peace & goodwill,” is carved into the ground. Despite his success, Fryar remains humble. Reflecting on visitors from Japan, he said “In my wildest dreams, I never thought people would come so far just to see cut-up bushes.” 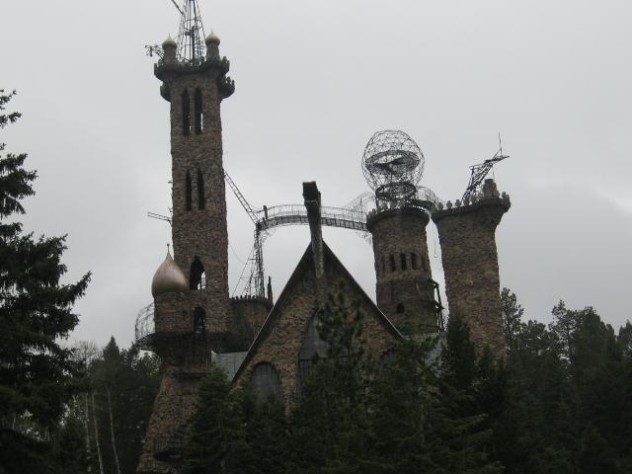 In 1959, a 15-year-old named Jim Bishop bought 2.5 acres of land in Colorado, and 10 years later, he began building a house. He’s still going, and the result is one of the biggest buildings ever created by a single human being. Bishop Castle’s main tower is 49 meters (160 ft) tall. Like the rest of the 50,000-ton building, every single piece was placed by Bishop himself. He worked with no direction, plan, or—so it appears—much regard for structural engineering.

The result has been called something you would find in a cross between Lord of the Rings and Mad Max. Wrought-iron bridges and walkways wind around the outside and join together at the tops of the castle’s towers. Its most breathtaking feature, a dragon’s head, pokes out above the main hall’s stained-glass window. It’s made from old metal hospital trays but actually breathes fire with the help of a burner from a hot air balloon, while the castle’s fireplaces release their smoke through its nostrils. The dragon’s breath currently shoots about 2 meters (6 ft), but there are plans to increase its range to 9 meters (30 ft).

Bishop says he has mastered the art of chatting and working at the same time, so visitors are encouraged, but they should keep in mind that he has no insurance and they must waive liability by signing the guestbook. Bishop is currently working on a dungeon room, though it’s as unplanned as the rest. According to Bishop, “What’s real neat about not having blueprints is that if you make a mistake, you call it art.”

Alan made some stuff from Legos once.