Dogs have laid their lives down countless times to save the humans they love. Below are the stories of hero dogs who made the ultimate sacrifice, from a boxer that saved his master’s young son from a speeding car to a pit bull that took on a cobra.

In September 2013, visually impaired Dave Furakawa was walking his four-year-old son Will to school when a red Chrysler careened through an intersection. It ignored a stop sign and bore down on father and son. All might have been lost if not for Simon, Furakawa’s boxer guide dog. Simon and Dave were struck, but witnesses say the dog rose from the pavement and pushed little Will out of the way.

Bystanders brought Will down the street to his mother, and Simon dragged himself in pursuit, with a broken leg and internal injuries. When Will reached home, the boxer finally lay down. He died before he could reach the vet’s office.

Simon had been with the Furakawas for four years, the entirety of Will’s life, and he was devoted to the child. The organization that provided Simon ensured there would be another dog for Dave when he was back on his feet. 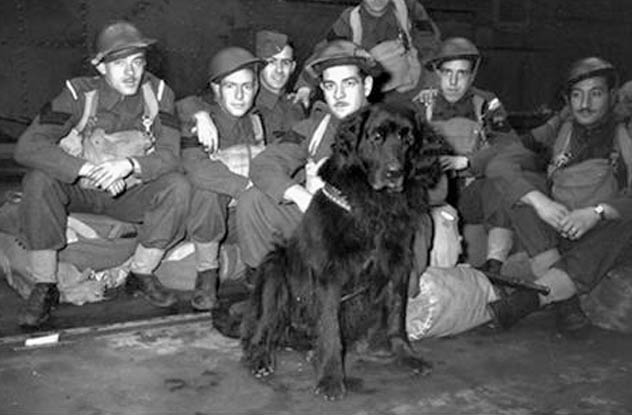 Gander, a Newfoundland, served in the Royal Rifles of Canada during World War II. On December 5, 1941, the same week as the Pearl Harbor bombing, Japan attacked Hong Kong, hoping to wrest the key island from British control. Gander and his unit were deployed to participate in the Battle of Hong Kong, a conflict that the British forces lost.

Casualties on the British side exceeded 2,000 and may have been higher but for the heroism of Gander. On two occasions, the massive dog turned back enemy advances, saving the lives of wounded troops. On a third occasion, a live grenade landed in the midst of the Canadian soldiers. Gander picked it up and ran back toward the Japanese with it. He died when it detonated.

In the years since his death, he has been honored in numerous ways, including earning the Dickin medal, a Canadian award for “displaying conspicuous gallantry and devotion to duty.” 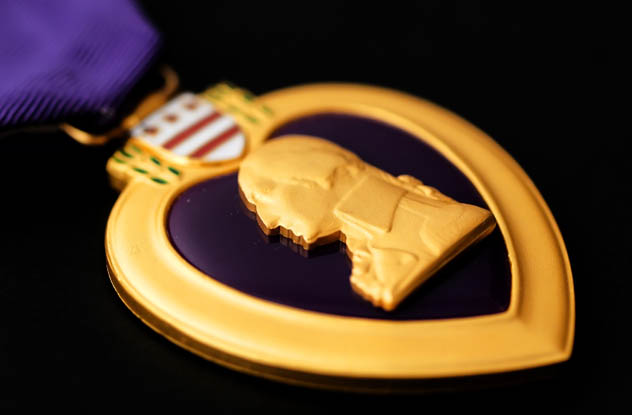 Anyone who has ever owned a Jack Russell terrier can attest that they are like giant dogs in tiny bodies, fearlessly spirited and willing to take on anything. This courage led a nine-year-old terrier named George to take on a pair of rampaging pit bulls in New Zealand.

George was playing with a group of kids when the two attacked. George defended the children valiantly, allowing them time to escape, but he was no match for the bigger dogs. One of the boys later said, “George tried to protect us by barking and rushing at them, but they started to bite him—one on the head and one on the back. We ran off crying and some people saw what was happening and rescued George.”

The little terrier survived the mauling, but he was so badly injured that his owner was forced to put him to sleep. The pit bulls were also euthanized. George received many honors for his bravery, including a Purple Heart from American veteran Jerrell Hudman, who was touched by the story.

It is no coincidence that law enforcement canines are so widely represented on this list. They are often the first line of defense, rushing into situations too unsafe for humans.

On January 28, 2014, Deputy John Herb confronted a suspicious figure walking on Butler Street in Pittsburgh’s Lawrenceville neighborhood. The suspect, 21-year-old John Rush, attacked the deputy, reaching for his gun and punching him in the face. Before Rush could be subdued, he fled.

He was later confronted in the basement of 3700 Butler Street by Philip Lerza and several other officers, including his K9, eight-year-old Rocco. Rush produced a knife, stabbing both Lerza and Rocco before he was captured. Lerza’s injury was minor, but Rocco wasn’t so lucky. The blade had sliced through his back, damaging his spine and kidney. Two surgeries and multiple blood transfusions followed, but Rocco developed pneumonia and his internal bleeding continued. He died two days later.

Rush had an extensive criminal background, including sex offenses against minors and acts of violence, with a history of mental illness. His crimes will likely keep him behind bars for many years to come. Rocco was buried with full honors, and a bill called “Rocco’s Law” is on the way to becoming passed in Pennsylvania. It will make it a second-degree felony to hurt a police dog, with a $25,000 fine and up to 10 years in prison for offenders.

6Nero Saves His Family From Fire 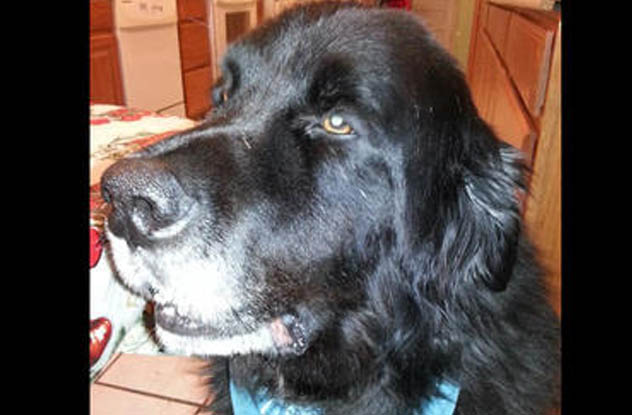 On November 24, 2013, fire raged through the Eliseo home in Yorktown Heights, New York. The family’s Newfoundland, Nero, burst into action, waking up Maria Eliseo and her daughter Marie. Marie found her way out through the smoke, but Maria, who’d had hip replacement surgery just three weeks previously, retreated into a second-floor bedroom. She was rescued with a ladder by her neighbors Brian Avery and Robert Cole.

The dog’s heroism came without a moment to spare. Marie Eliseo said, “If it weren’t for Nero, I would not have gotten out in time.”

The family initially believed that Nero had escaped the blaze and asked their Westchester County community for help tracking him down. Later, though, his body was found in the ashes of the home, along with three other dogs. The Eliseos were crushed. Giulio Eliseo said, “You have no idea, I feel like I lost a son. Without him, I would have lost my wife and daughter in the fire.” 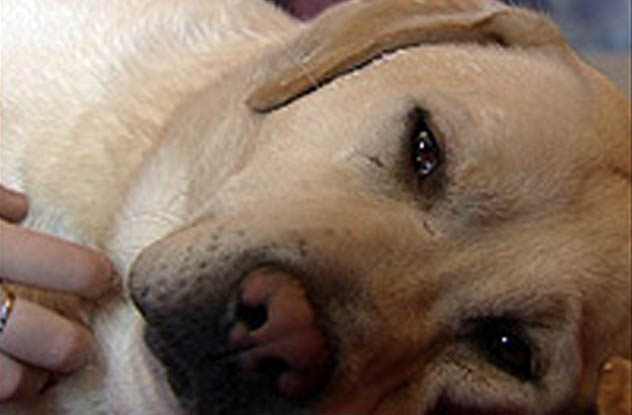 In November 2005, the Doherty family was on a stroll with their four Labrador retrievers in Randalstown Forest Park in Northern Ireland when they were attacked by a pit bull. The dog first went after the Doherty’s lab, Cole, biting his leg. Parents Sean and Dierdre tried to pry the pit bull loose, but when Cole went limp, it turned its attention toward them. Both received minor wounds. Then the dog ran toward the Doherty’s youngest child, 10-year-old Ben.

That’s when Ben’s lab Troy jumped into the fray. Troy fought with the dog until police arrived on the scene and shot the pit bull. Troy had been badly injured, and he died shortly thereafter.

Sean Doherty later said, “We are just devastated by Troy’s death. He always gave hugs, put his head on your chest. We have cuts and bruises from the attack. This other dog was let off to kill. You could see it in his eyes. But the children are okay. We are so thankful to Troy for saving our lives.” 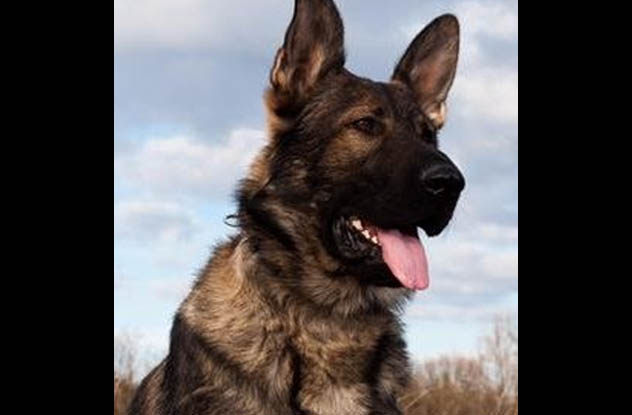 On March 13, 2013, 64-year-old Kurt Myers went on a shooting rampage, killing four people in the towns of Mohawk and Herkimer in upstate New York. The gunman then holed up in an abandoned Herkimer bar, beginning a tense standoff with police and FBI agents that stretched on for hours. The first agent that led the charge on the bar was Ape, a Czech German shepherd. He’d been outfitted with a camera to give the other officers a glimpse of what was going on inside. Myers opened fire on the dog, and Ape was struck in the chest.

Other officers followed, killing Myers in a firefight. No one else was injured, likely due to Ape’s sacrifice. The shepherd was rushed to a local veterinary clinic, but he succumbed to his wound. He’d only been on active duty for a little over two weeks.

Ape was honored at the FBI’s headquarters in Quantico, Virginia, his name added to a memorial wall for fallen canines. The motive for Myers’s attack is unknown, but he was heavily in debt, living off of credit cards. 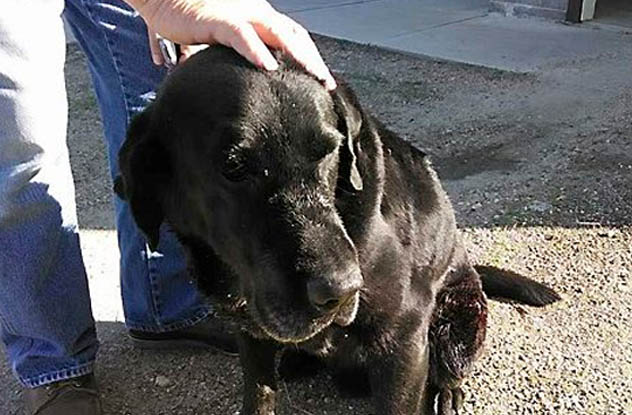 Black bears often appear clownish, digging through garbage heaps and climbing trees. But they can be formidable combatants, especially when defending their cubs. On May 21, 2014, Chris Wacker learned this the hard way, when he took his father’s dog out to gather mushrooms in northern Minnesota.

Chris and Toby, a black lab, came upon two large bears with cubs. Toby sprang into action and was set upon by the female, whom Chris estimated at 135 kilograms (300 lb). He didn’t stand a chance, but while the dog was being savaged, Chris got a chance to escape, running back to his father’s home.

The pair expected they would never see Toby again, but 10 minutes later, the grievously wounded dog came limping home. He sported bite marks and gashes 15 centimeters (6 in) deep. John rushed Toby to the vet, and while the courageous dog clung on to life a few more days, he eventually succumbed to his injuries.

Although Chris remains skeptical, John was sure that Toby’s heroism spared his son, claiming “This bear has become brazen. She’s aggressive. She would have killed Chris. Toby saved his life. I’m convinced of that.”

Most of these stories are similar in that a brave dog took on some kind of danger to save its humans. The story of Marco Lavoie’s dog comes from a different angle altogether.

In July 2013, Lavoie set off on a two-month adventure into the harrowing wilderness of northern Quebec with his beloved German shepherd. The experienced outdoorsman had gone on other such trips before without incident, but this time, a bear attacked, devouring his food and destroying his boat and equipment. Man and dog managed to get the beast to flee, but the damage had already been done.

Stranded in an area largely barren of vegetation, Lavoie was forced to make the heartbreaking decision to kill his dog with a rock and eat it.

After he did not return from his journey at the scheduled time, the man’s concerned family went to authorities, who began searching for him. A helicopter crew found him but not till late October. He’d lost 40 kilograms (90 lb), and suffered from hypothermia and dehydration.

When word reached the public that he’d eaten the dog, there was an understandable backlash. However, survivalists praised the action, saying Lavoie would have surely died otherwise. 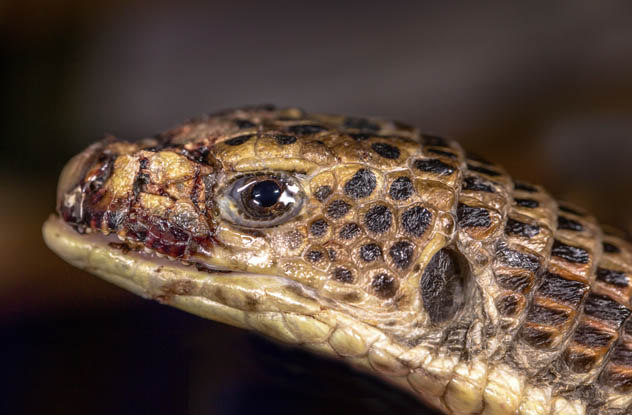 No breed of dog on the planet has a worse reputation than the American pit bull terrier. This article itself mentions two cases where other dogs were called upon to save their loved ones from these powerful canines. But when properly raised, the pit bull is as loyal, loving, and courageous as any other breed.

Case in point: Chief, from Cagayan de Oro, Philippines. At 2:00 PM on February 12, 2007, a cobra slithered into the kitchen of Maria Frontreras’s home, menacing Maria and her elderly grandmother. The snake easily could have killed the two women, but before it could bite them, Chief seized it and shook it to death.

The cobra bit the pit bull on the jaw. Maria sought help from a veterinarian, but it was too late because the bite was too close to Chief’s brain.

Maria called her husband home from his job at Nestle Philippines, and he arrived just in time to watch Chief slip away, wagging his tail a few last times. The family waited until their children came home from school to say goodbye to their beloved pet before giving Chief a hero’s burial.