Ants are one of the most successful animals on earth. Heck, in a lot of ways they’re more successful than we are. As a result, there are a number of animals that imitate them, usually for defense, but sometimes for more nefarious purposes. These creatures stake their very existence on their mimicry ability, hoping it’s convincing enough to trick everything around them into believing they’re a part of the multitudinous and foul-tasting ant horde. Here are the world champs in this chancy type of chicanery. 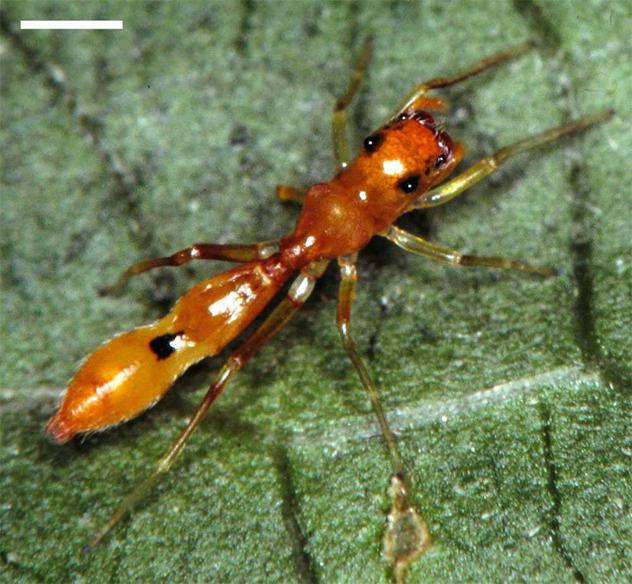 Over 100 spider species imitate ants, with varying degrees of success. This can be a difficult task, considering how spiders only have two body segments while ants have three. One species of crab spider, Aphanlochilus rogersi, actually carries around the severed heads of ants it’s killed to further the disguise. Once the disguise is complete with the final segment, they can go on to coldheartedly murder more unsuspecting ants at will.

Synemosyna jumping spiders don’t need any augmentation though, as their disguise is already spot-on. One of the segments on the Synemosyna spider is constricted, giving the appearance of having a three-part body. 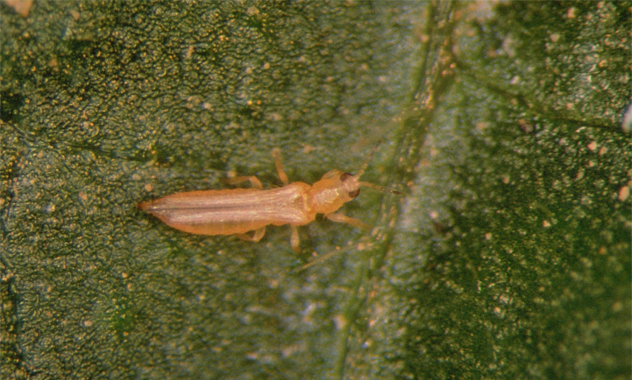 Thrips are slender, tiny winged insects that feed on prey—both animal and plant—by puncturing and sucking with unique asymmetrical mouthparts. They are generally considered an agricultural pest. The members of one genus, Franklinothrips, imitate ants in both appearance and behavior.

One species from Africa, F. megalops, is particularly good at it. Well, the females are at least. Male megalops tend to be paler and shrimpier, once again getting the short end of the stick as is so common in the insect world. 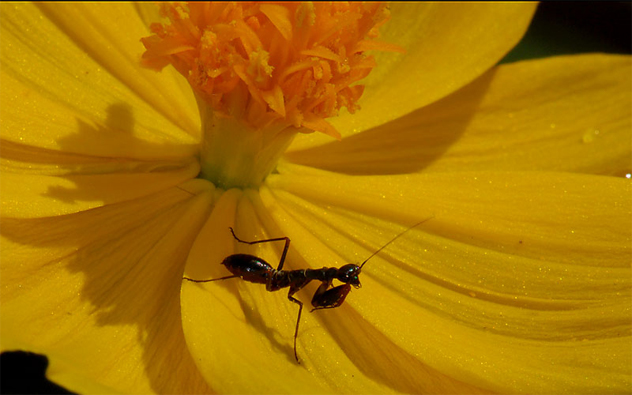 Praying mantids are known for being deadly and effective killers—of their mates as well as their prey. The Ghost Mantis (Phyllocrania paradoxa) prefers subterfuge, and is tiny even for a bug. The adults are fabulously weird looking, making them one of the most popular to collect among insect enthusiasts, while their nymphs appear exactly like black ants to deter predators.

The aptly-named Asian ant mantis (Odontomantis planiceps) does an even better imitation; it’s extremely hard to distinguish from an actual ant without looking so closely that you’ll later regret the nightmares. 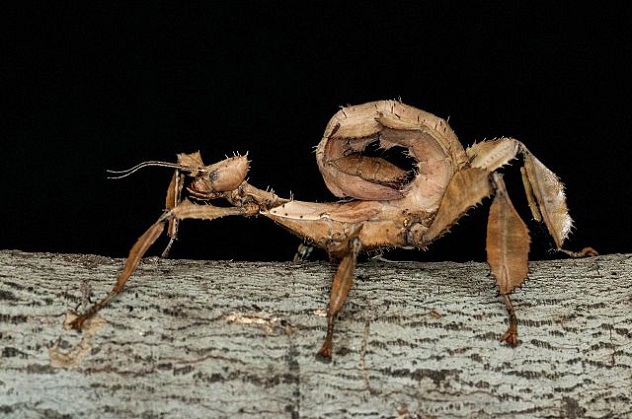 Giant prickly stick insects (Extatosoma tiaratum) are Australian bugs that are packed with thorny spikes, can fly reasonably well, and raise their butts in the air when threatened (this last trick is to make you think they’re a scorpion). Their nymphs come right out of the egg looking exactly like Leptomyrmex, or spider ants, complete with red head and black body. It’s not exactly spot-on, but it’s apparently enough to trick any bird with an aversion to the nasty taste of ants. And considering the monstrosities they grow up to become, at least they get to spend a little time looking sort of cute. 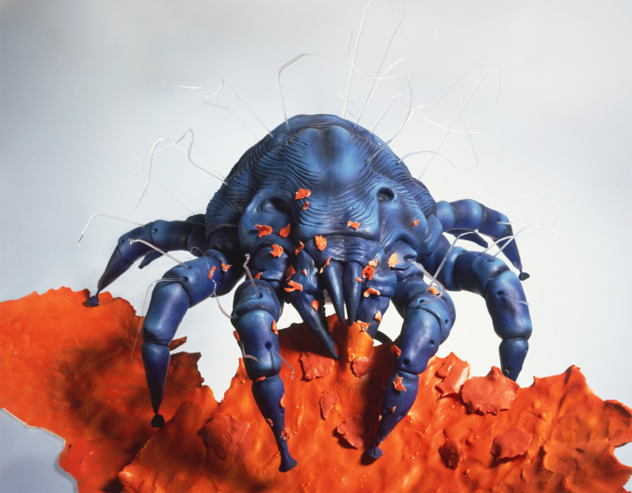 Mites survive by taking advantage of the fact that they’re so small that you aren’t even aware they’re robbing you blind. Chances are, there are probably mites living in your eyebrows right now. Ants are pretty small themselves, but not even they are immune to the mite scourge. Planodiscus mites attach to and imitate South/Central American army ants, all while sucking out the juicy goodness within. Their carapace is sculpted in such a way that it’s nearly indistinguishable from an ant leg, the body part where they hitch their parasitic ride.

And then there some some mites from the Habeogula genus, which may be the least subtle parasites on the planet. They will sneak their way up to an ant’s head, clamp down on the neck, and align themselves so that they can steal food while the ant tries to eat.

The Hemiptera order of insects are the “true bugs” and include 50,000-80,000 species. The thing that they all have in common is a similar arrangement of sucking mouthparts. A very few of them strongly resemble ants and live in their vicinity. The assassin bug is one of these, and when a clutch of their young hatch they make sure to stick together in a group, making them look more like a bunch of ants to give predators an extra dose of the creeps. 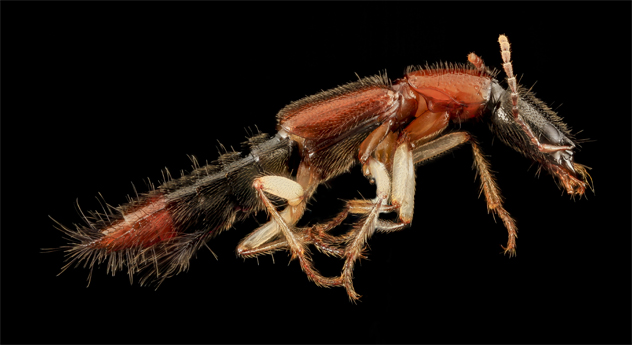 There are a number of beetles that look superficially like ants in order to discourage predators, but a few actually infiltrate their nests.

Many rove beetles (Staphylinidae superfamily) are parasites that march along with army ants. They are able to vary their color to match the color variations of the ants. Perhaps even worse than the headhunting spider mentioned above, rove beetles are baby killers, using their disguise to devour ant larvae and eggs. Even more endearingly, they’re gleefully cannibalistic, and will munch away on their own young too.

And then we have the Adranes genus of beetles, which are too lazy to even work for their disguise. By imitating the odor of ant larvae, the beetles are actually able to trick their hosts into feeding them while they wallow around the colony like miniature Marlon Brandos. 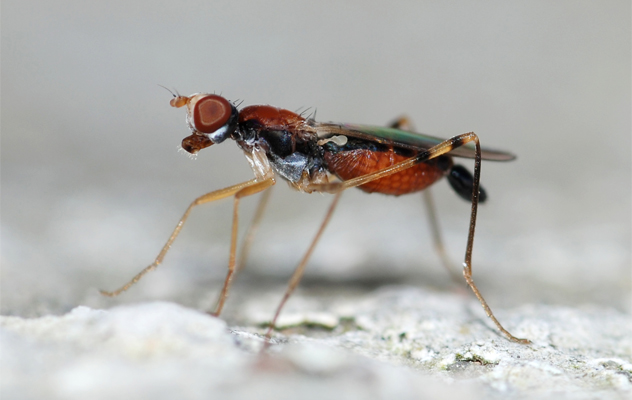 Stilt-Legged Flies (Micropezidae) are so named because of their spidery, long legs. Some species (in the Mimegralla genus) wave their front legs around to mimic wasps, one (Anaeropsis) has gruesome stalked eyes, and a few, such as those in the strongylophthalmyiid genus, imitate ants. It may not be perfect, but at least when you’re a fly you can zip right off to another location whenever the ant Gestapo asks to see your papers. 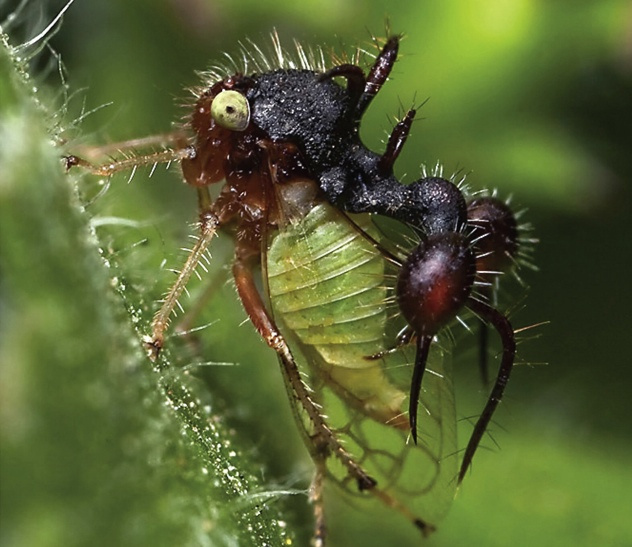 Treehoppers are insects that are similar to cicadas and leafhoppers, and are best recognized by an enlarged pronotum that usually resembles a thorn growing out of its back. These structures can get pretty creative sometimes, and often look less like a thorn and more like the work of a madman. One species, Cyphonia clavata, has evolved to look like an ant is riding along on its back. That’s actually being pretty generous—although the coloration is accurate, the actual shape of the pronotum looks more like a jumble of ant pieces welded together. 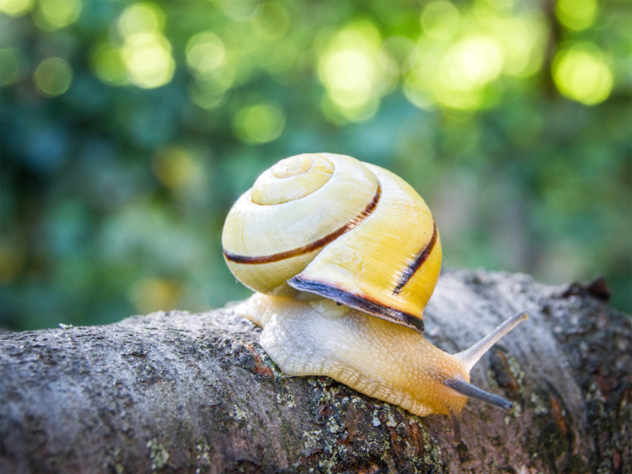 The ant-loving snail, Allopeas myrmekophilos, was only recently discovered, and was found to have a certain ability that’s unique among its kind. Unlike many of the creatures on the list, this snail doesn’t really look like an ant per se. What it does look like is an egg. A ponerine army ant egg, to be precise. The first trick up its slimy sleeve is to excrete a pheromone-laced foam, encouraging the army ants to carry it back to their lair. The snail’s shell keeps it safe from any untoward mandible stabbing.

After the mollusk has been transported back to the ant colony, its resemblance to an egg allows it safe passage to steal whatever it wants from the pantry. Then, when it comes time for the colony to pack up and leave for a fresh location, our sneaky snail simply oozes out some more pleasure-foam and gets another luxurious ride to its new home.

E. Reid Ross is a columnist at Man Cave Daily and a frequent contributor at Cracked.com. He’d love it if you made his Twitter following less pathetic: @ereidross.