Stick insects are amazing. We hear about them in nature documentaries, see them in bug zoos, and may even purchase them as pets—possibly without understanding how to care for them. But not all stick insects are innocuous or tame skinny creatures. Let’s look at the incredible diversity of stick insects, discovering a flower imposter and even a species that can temporarily blind humans.

Stick insects are weird, and as with any unfamiliar animal, you should approach them with caution. The American stick insect Anisomorpha buprestoides sprays milky, acidic chemicals from glands on the rear of its thorax. After taking aim at a potential threat, it directs the spray at the adversary’s face with accuracy and range that make it a credible danger. The stunning Peruvian stick insect, often kept as a pet in terrariums, is another species that gives off a toxic spray.

The stream of caustic chemicals causes intense irritation and burning in humans and pets. Blindness may temporarily occur if the compound gets into the eyes. Keep your distance from the animals, and never approach from the rear.

The Goliath stick insect is big and green, with defenses that may appear highly formidable in the first moments of an encounter.

This species grows to 25 centimeters (10 in), with females noticeably larger than males and unable to fly. The relatively massive creature will rear to display black spots on red undersides, resembling giant eyes against an aggressive background.

The insect can take this to the next level with verbal action. Unusually among the many quiet arthropod species, the Goliath stick insect can produce a formidable hissing sound like a snake. Finally, the threats may lead up to a physical attack with the specimen brandishing its spiny legs when backed into a corner by an enemy. 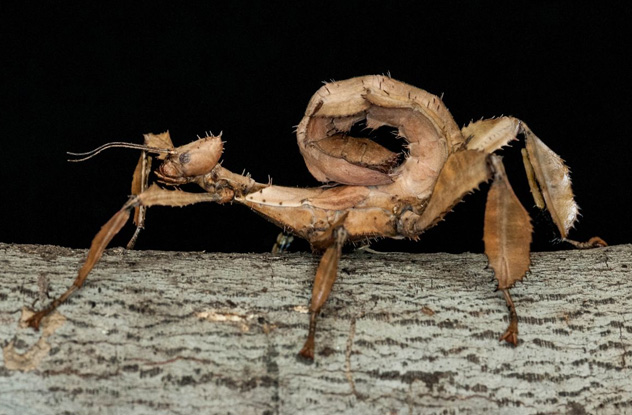 The stick insect’s classic twig look matches its name. We would expect most of these creatures to resemble living wood, but some species take a rather different approach and mimic dead vegetation. The giant prickly insect of New Guinea, for example, resembles the dried shell of a brown scorpion at first glance, and its widened body and broadened legs resemble a stem with dead leaves and sticks. Its appearance is one of the most bizarre among all insects, leading to its increased popularity as a terrarium pet.

Just as this species uses dead-leaf camouflage to avoid predation, predators such as the dead leaf mantis use the same tactic to hide from their prey. As a result, the two species share an uncanny resemblance. 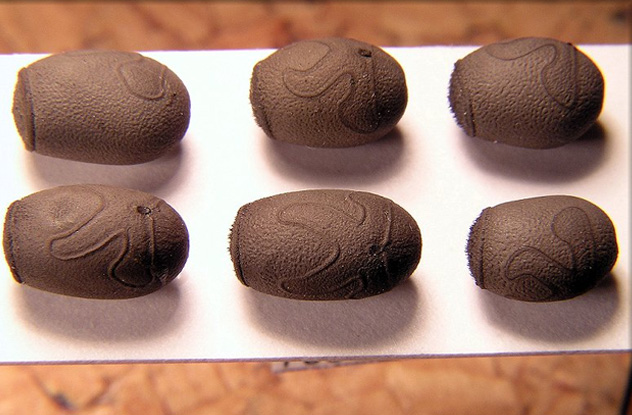 Many stick insects are incredibly skinny, but the Malaysian stick insect or jungle nymph lays the largest eggs of all insect species. This rainforest bug lays eggs that measure an incredible 9 millimeters (0.35 in) in length and 6 millimeters (0.25 in) in width.

The record for most prolific egg layer among stick insects goes to Arophylla titan, which may lay more than 2,000 eggs. While other species of insects may lay multitudes of small eggs, the many eggs laid by this species are relatively large, making the surprising feat of reproduction especially impressive. The animal is identified in the Guinness Book of World Records as the “most fertile stick insect.” 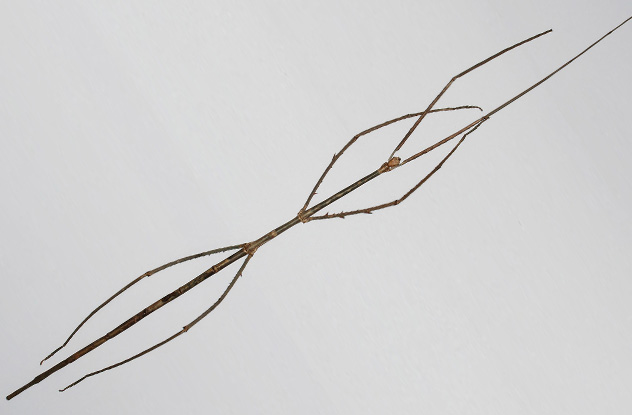 Stick insects evolved as an order with more than a fair share of record breakers. Chan’s Megastick stands out with an incredible length of 36 centimeters (14 in), and 56 centimeters (22 in) with the legs extended. That’s not just longer than any other insect (barring further investigations in Australia)—it’s longer than the average newborn human baby. This largest insect on the planet was not discovered until 1989, by Malaysian naturalist Datuck Chan Chew Lun.

The bizarre adaptations seen in this species extends to reproduction as well as physiology. The stick insect’s reproductive ecology recalls that of the maple tree, a species in an entirely different kingdom. Females lay eggs with tiny wings. 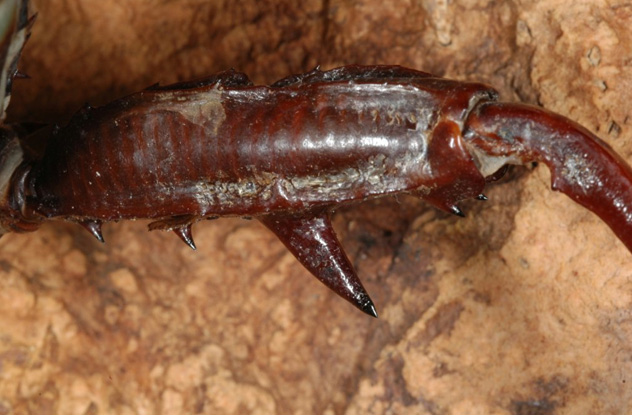 Normally, insects are used as bait on fishhooks. However, one species of stick insect has the dubious honor of being used as a fishhook itself by fishermen.

The aptly named thorny devil stick insect of New Guinea is a highly aggressive dweller of the forest floor. The large, razor-sharp spines that curve out from the legs are used as fishhooks by native New Guinea fishermen. These insects will defend themselves aggressively with the spines, even clamping down on perceived attackers with their strong legs.

Unusually for a stick insect, this species migrates from feeding sites to resting areas in groups. Common behavior includes playing dead when threatened and swaying in the breeze. 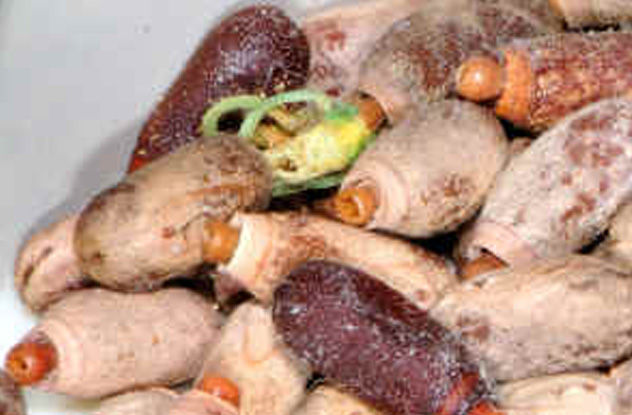 In a strange symbiotic breeding relationship, certain stick insect species lay eggs that resemble seeds sought by roving groups of ants. The ants pick up the eggs and carry them into their own colonies, protecting them from predatory wasps, fire, heat, drought, and numerous other threats to their viability and survival. In return, the ants remove the capitulum of the egg and feed it to their offspring as a highly nutritious food.

The unlikely relationship between these two insects is a fair bargain. The stick insect eggs suffer little or no harm from the ants removing the edible part. After the capitulum is removed, the ants ignore the eggs, which can then hatch in relative safety. 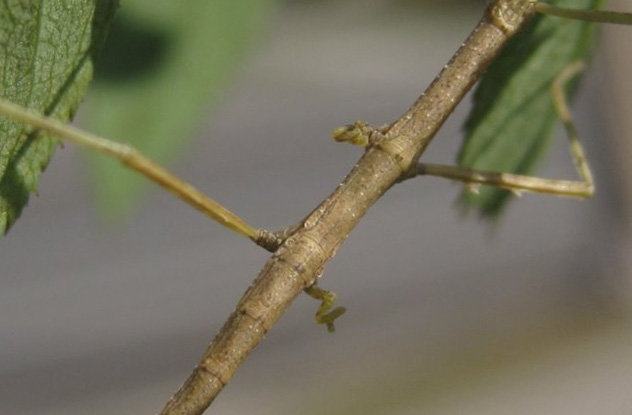 Lizards can partially regrow tails, and salamanders lose and regrow whole limbs. Some stick insects show a similar adaptation, which is surprising, since insects normally appear to be less-evolved creatures.

The insects drop limbs by deliberately breaking them off with a severe, self-induced muscular movement. The severed, twitching leg may then distract a pursuing predator. The effect is similar to the hiking trick of dropping a backpack in case of harassment by a bear or other threatening animal.

The stick regenerates the lost limb fully during molting, but the disability may be significant in the meantime. So if you keep a stick insect as a pet, you must take extreme care to prevent unnecessary limb loss, which can occur from fright as well as rough handling. 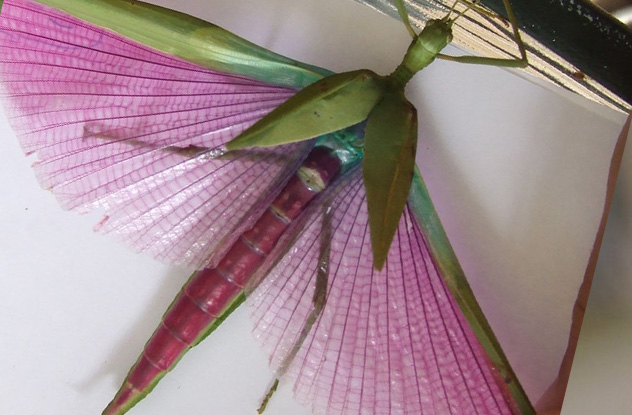 Native to the Eucalyptus forests of Australia, the green stick insect Podacanthus typhon feeds on tree leaves as it moves slowly through the forest canopy. This bug conceals a spectacular secret beneath its deceptively normal outer appearance. As soon as the wings open, brilliant wing sections and veins appear in dramatic, contrasting pink.

The wings complement pink leg accents and a pinkish upper thorax, normally hidden by the wing covers. Perhaps appropriately, no members of this species are male. The females use the unusual process of parthenogenesis to reproduce, which means eggs develop into young without fertilization.

Stick insects aren’t terribly keen on gender equality. Some species, such as the aforementioned pink-winged phasma, have no males at all and use parthenogenesis. Other species boast outrageous female-to-male ratios that avid human male daters could only dream of, such as one male for every 1,000 females. Females are bigger than males, and the difference is so great that some walking stick couples appear to represent two distinct species.

Sticks, as some of the slowest-moving and slowest-acting animals, may spend several weeks locked in a mating embrace. That’s longer than the lifespan of many other insects. Males are believed to stay so closely attached to females not only for copulation but to ward off competitors.

Christopher M. Stephens is an avid naturalist, freelance writer, and graduate student in environmental science and management from Royal Roads University. His wilderness adventures and experiences with stick insects have been mostly positive. For more information on his other writing work or wildlife tours contact him here.