Australia is home to some of the most terrifying animals in the world. Although it’s true that Australians are used to such hazards and mostly take them in stride, not all dangers can be extinguished by looking inside your shoes before you put them on.

Sometimes, our imaginations concoct more than venomous snakes and spiders when we see the Australian mountains, deserts, and blood-colored plains. And that’s during the day. When the night becomes pitch-black, even more legendary creatures may spring to life, ready to strike their unsuspecting human prey.

Although the existence of these Australian animals is unconfirmed, here are 10 mysterious critters that could be out there—waiting for you—just beyond the circle of firelight. 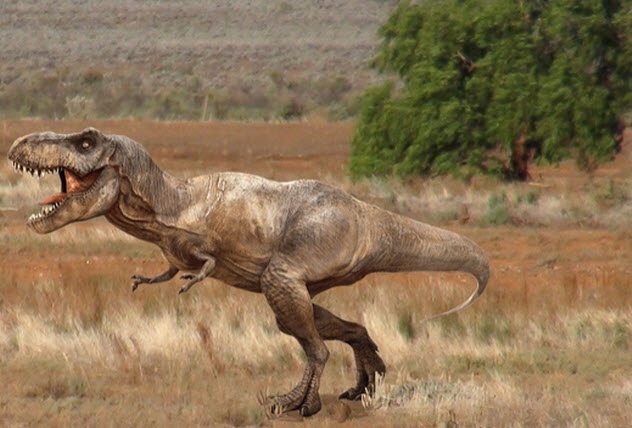 In the very top part of Australia, Arnhem Land is a vast wilderness that is sparsely populated by humans and heavily populated by animals of all kinds. Some Aboriginal groups in this area have an oral history of the Burrunjor, a “giant lizard” that ate kangaroos.

This is not surprising given that Australia is full of lizards, some quite large. However, the Burrunjor is bipedal and 7.6 meters (25 ft) long. Some reports give it feathers. Many say that it snorts and huffs and puffs. In addition to eating kangaroos, this creature allegedly has developed a taste for beef.

The last reported sighting of the Burrunjor was in 1985 when it frightened a traveling family.[1]

Although no photographs of this animal exist, the Burrunjor has been identified as a Tyrannosaurus rex–type of dinosaur. Many footprints have been found and plaster casts made. 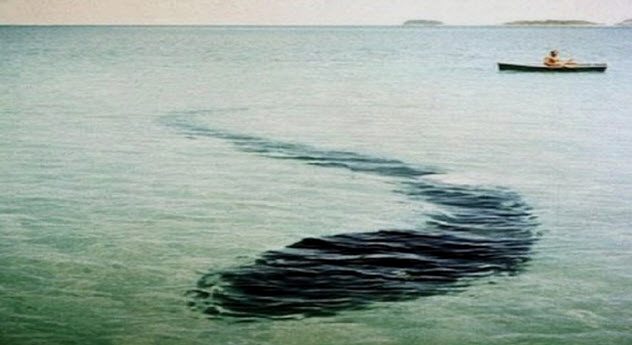 The almost uninhabited Hook Island is one of Queensland’s Whitsunday Islands. Although it used to have a wilderness retreat and an underwater viewing station, both of these attractions are now closed. Except for the few people employed as caretakers in the old buildings, no one lives there anymore.

The beautiful, pristine beaches are visited frequently by tourists on boats. They snorkel and sometimes die from jellyfish stings in the colorful reefs surrounding the islands.

In 1964, Robert Le Serrec, his family, and another male companion were crossing Stonehaven Bay on the island when they spotted an enormous creature that seemed to be resting in the shallow water.[2]

Thinking the creature was dead, Le Serrec took some photos of the giant monster. The family’s companion jumped into the water to get better shots. When the creature lunged at the man, he quickly got back into the boat.

The animal looked like a giant elongated tadpole. It had no fins and smooth, dark skin. Its eyes were on top of its head.

Many suspect that the photos of the Hook Island sea monster are fakes, but there has been no proof to that effect. Still, it’s debatable as to whether the pictures show a true sea monster.

8 The Beast Of Buderim And Other Mainland Thylacines 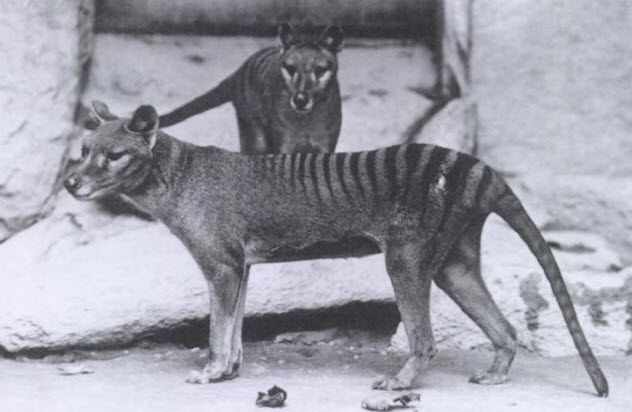 The thylacine (aka Tasmanian tiger) was the largest carnivorous marsupial known to definitely exist. This big doglike creature with the gigantic mouth could also hop on its hind legs for some distance like a kangaroo.

Although some people in Australia still claim to see thylacines, Tasmanian tigers are generally believed to be extinct. Farmers deliberately hunted these creatures in the 19th and 20th centuries to protect their livestock. Although the threat may have been exaggerated, the Tasmanian government established a bounty to destroy the thylacines. However, dogs, disease, habitat loss, and other factors also contributed to the decline of the Tasmanian tiger.

“Benjamin,” the last thylacine in captivity, died at Hobart Zoo in 1936. There is some surviving footage of Benjamin, who rather oddly resembled both a dog and a kangaroo. He or she (no one is quite sure) died when locked out of its shelter overnight.

Supposedly, thylacines are seen frequently in Australia. In fact, there are many grainy videos of potential thylacines bouncing around Australian paddocks, and surprisingly, they are mostly from the mainland.

The Buderim near Queensland’s Sunshine Coast is one semirural area where regular sightings occur. However, as with most sightings, it is not always possible to tell from the footage and photos if the animal is an actual thylacine or a mangy fox.[3] Euroa is a beautiful little town in Victoria at the foot of the Strathbogie Ranges. There is a miniature railway with nearby waterfalls and tourist drives. Famed bushranger Ned Kelly once held up the bank there, which in Australia is a mark of good history.

In 1890, many residents of Euroa were terrorized by a 9-meter-long (30 ft) monster. The creature caused so much damage and panic in the town that the Melbourne Zoo sent a “monster catcher” to Euroa with a giant net.

Although his mission was unclear to the general public, the monster catcher probably meant to kill the creature and bring back the body. He managed to get 40 men to accompany him to catch the beast, which was described as a hairy crocodile. Some people have theorized that it might have been a Pederpes finneyae, which is kind of a missing link between fish and land animals.

Nothing was ever found except giant footprints that disappeared into thin air.[4] 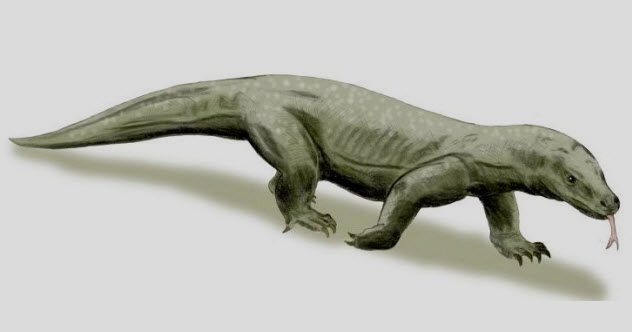 The Megalania prisca was (or maybe still is) a giant reptile that used to (or does) roam around Australia.

Similar in appearance to a huge goanna (monitor lizard), the Megalania prisca had the potential to grow as long as 9 meters (30 ft). They may still be out there, thundering through the rain forest undergrowth or central desert and munching on venomous snakes like candy.

There have been multiple sightings of monster lizards, both in modern times and in oral Aboriginal history. Some people tell stories about the vicious prenty (perentie) and believe that the creature’s glare alone would kill them.[5]

There is a report of a prenty killing a hobbled horse in 1899, just outside the circle of campfire light. When three men who were traveling together went to investigate, two of the men and more horses were attacked by giant lizards known by the local Aboriginal people as Gonderanup. The two men who were bitten by Gonderanup died later from their wounds. The bites seemed to be toxic, much like those of Komodo dragons.

The Megalania prisca has been sighted as recently as 1978 and in as populated an area as the New South Wales town of Cessnock. There, a farmer saw an 11-meter-long (36 ft) lizard eating one of his cattle. Judging by the fence by which it was standing, the creature was 2.7 meters (9 ft) tall on its four feet. 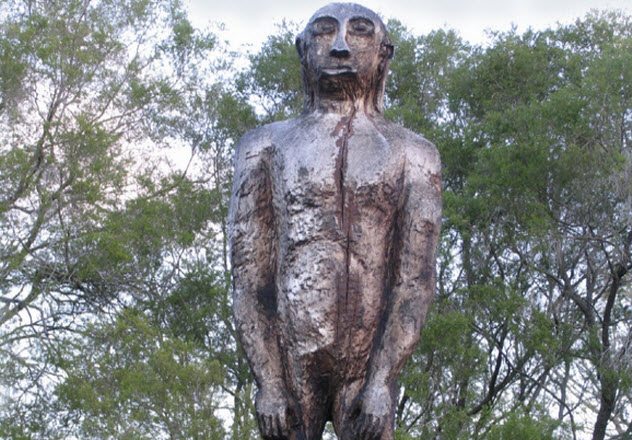 The yowie, the Australian version of bigfoot, is mentioned in oral Aboriginal history in many regions and languages. Although the creature goes by various names, the most recognizable today is yowie.[6]

Early reports from the late 1800s referred to yowies as “indigenous apes.” They weren’t considered an “unknown creature” but rather an as-yet-unclassified Australian animal. There are still sightings today. Most witnesses see the hairy creatures and find footprints. There are even alleged photos and videos. But no conclusive evidence has ever been discovered.

Cumulatively, the sources seem to suggest that yowies make a lot of noise and range in size (possibly due to the existence of multiple species, including a surviving species of Australopithecus). They are not usually aggressive and want to be left alone. 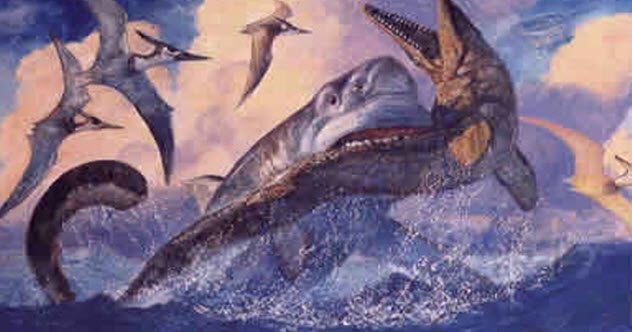 Port Stephens is a gorgeous tourist destination in New South Wales that is popular with newlyweds, families, and beachgoers. The clean beaches are good for swimming and other water sports. People also fish there and presumably hope to catch a whopper . . . but maybe not a megalodon.

The terrifying megalodon was a giant prehistoric shark typically up to 18 meters (59 ft) long.

In 1918, a report from Port Stephens said that a shark of “almost unbelievable proportions” was stealing crayfish pots. The creature’s size terrified the fishermen who witnessed it. In this case, the fishermen gave the size of the shark as up to 91 meters (300 ft) long, almost three times as big as the longest blue whale ever recorded.

And yes, they knew the difference between a whale and a shark. They said that the shark was whitish in color and that the water “boiled” above it as it swam.[7]

In Australia, anything in the bush that looks like a kangaroo hops. From the big red kangaroos down to the smaller wallabies, potoroos, pademelons, and quokkas, all these cute little darlings hop rather than walk like a cat does.

As seen in the video above, the “catgaroo” in the bush north of Sydney in New South Wales looks like a wallaby but walks like a cat. It also seems to have a marsupial-like bottom.[8]

What is it? Possums don’t have legs like that. Is it a tree kangaroo way out of its range? Is it an animal that we have not identified yet? Recorded in 2015, the footage of the animal raises more questions than it answers. 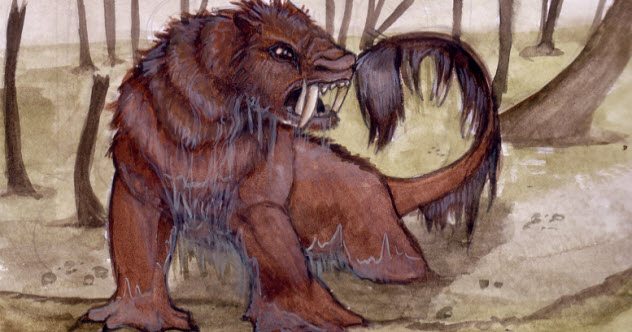 Common in Australian folklore, the bunyip is another creature that can be found in multiple Aboriginal stories and oral history. The bunyip seems to have a great many descriptions, and its name is used for a number of creatures. The semiaquatic bunyip lives in rivers, streams, and billabongs, which are water holes unconnected to rivers.

Some scientists believe that the bunyip was actually a Diprotodon, similar to a wombat but the size of a rhinoceros. It may well have lived in the swamps and rivers of Australia and acted much like a hippopotamus. Aboriginal people from thousands of years ago would have encountered these creatures, and the stories could continue long after they were gone.[9]

Others believe that the bunyip was a large seal that made a lot of noise and scared people.

Are we still encountering them today? The last recorded sighting in 1890 was of a bunyip grazing peacefully by some water. But with so many different descriptions of bunyips, it is impossible to say for sure what people are seeing. 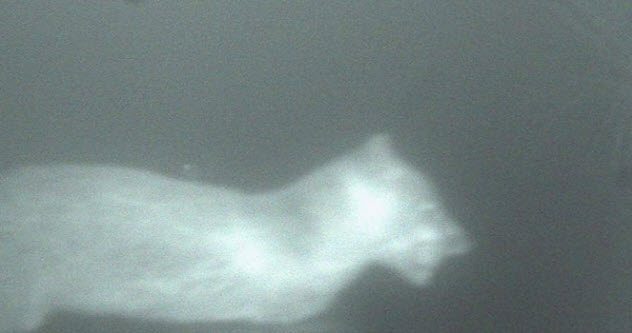 As far as we know, there are “officially” no big cats in Australia. However, many feral cats, which have grown quite large, have taken over the bush and killed millions of native animals. As we’ve discussed, thylacines may be bouncing around. There was also once a “marsupial lion.”

But there are no lions, tigers, pumas, or panthers. Officially.

However, people see these creatures with astonishing regularity. Sensible people as well as people whom we may not be so inclined to believe (e.g., drunk people).

The Gippsland region of Victoria is a roughly rectangular area bordered by mountains and sea. It’s a farming region east of Melbourne with many heavily forested areas where cryptids could hide.

There are recorded sightings of a lioness prowling around the “Haunted Hills” near Morwell and even closer to Melbourne in the Dandenong Ranges and Yarra Valley. With so many sightings in so many places, people who see these big cats are generally believed. Farmers lose their livestock to these animals with frustrating regularity.[10]

Are these giant cats unclassified marsupials? Are they freakishly large but previously domesticated moggies? Or are they a breeding population of big cats? The Victorian state government has inquired but found no proof of big cats.

Christy Heather is an Australian writer and criminal lawyer who once saw a big, tawny, puma-like cat standing in the middle of a dirt road near Yea in Victoria, Australia. Her husband did not turn the car around because the last time she saw something weird (a snow-white echidna), it had gone by the time they drove back to see it. She has limited vision and a positive attitude.

Read about more awesome and terrifying Australian animals on 10 Awesome Animals You Don’t Expect To Find In Australia and Top 10 Deadliest Animals In Australia.