When you look outside, you might see a squirrel run up a tree, a snake slither across the lawn, or the occasional bees’ nest near your house. There are much more interesting creatures in the world beyond your yard, however. Here, we bring you those exotic animals, from a hummingbird impostor to a sneezing Michael Jackson monkey. 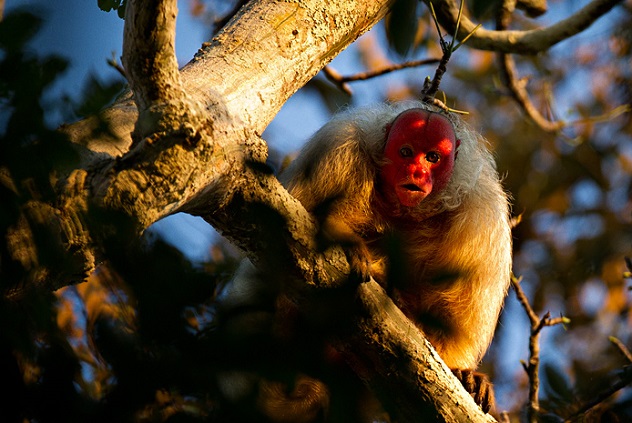 The bald uakari is a species of monkey native to Brazil and Peru that is known for its bright red face. A pack of these monkeys is called a troop, and they prefer to live in high trees, away from the constant flooding that plagues their habitat. Scientists believe that the monkey’s colorful face is the result of having no pigment on its head, which allows the blood vessels’ red color to show through the skin. It’s actually a disadvantage to the monkey’s survival, because lurking predators can see it more easily, but it’s also a sign of a healthy immune system.

Unfortunately for these jungle monkeys, they are slowly going extinct thanks in part to hunting by humans. Bald uakari with paler faces also known to be susceptible to malaria and seclude themselves from other uakari, choosing not to reproduce. 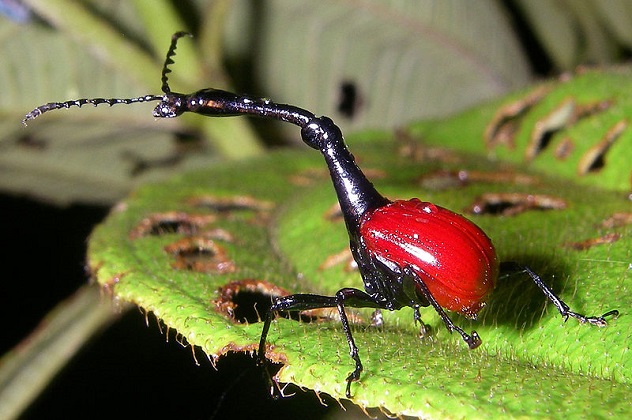 Receiving its name from its abnormally long neck, the giraffe weevil is a species of beetle that lives on the island of Madagascar. Though it may look very uncomfortable, this weird abnormality is critically important in the bug’s life. For the males, their necks serve as fighting mechanisms against other males, usually over a female weevil. Male weevils’ necks are twice as long as those of female weevils.

In Madagascar, the weevils have designated trees that are meant for weevils and only weevils. They use these special trees as a source of food as well as a comfortable habitat. Their soft and fragile wings are sheathed in a protective shell called an elytron. 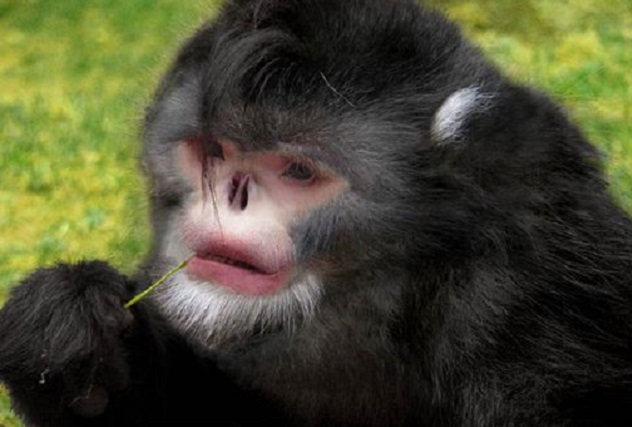 The snub-nosed monkey more closely resembles a post-surgery Michael Jackson than a primate. They were only recently discovered in the Asian country of Myanmar, after a few were accidentally shot and killed by hunters. Since then, scientists have been observing these monkeys in the jungles during the rainy season. The scientists thought this would be the best time to observe their unusual behavior, which includes curling their heads in a ball to protect themselves from the water because the odd shape of their noses allows water to easily fall into the nostrils, causing them to constantly sneeze.

The snub-nosed population in Myanmar is currently between 260–300, but it’s in danger of dropping due to their tasty meat, which is coveted by hunters. Thankfully, they feed on berries and live in the high treetops, so it’s difficult for hunters to catch them. 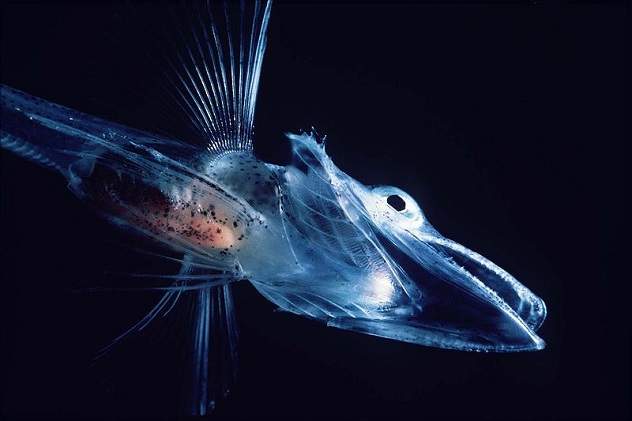 First discovered by Ditlef Rustad in 1927, the ice fish is a peculiar-looking organism that inhabits the shores around Antarctica. It possesses striking features, including fangs and a ghostly white body. This phantom appearance is the result of a lack of hemoglobin in its blood, which makes the fish as transparent as a window.

The mystery of how these fish survive without hemoglobin, which is an important substance that carries oxygen through the bloodstream, has puzzled researchers for over 60 years. Recently, scientists have theorized that the ice fish could be absorbing oxygen through its skin rather than through gills and into the blood. Another possibility is that instead of using blood to carry oxygen, they use blood plasma, the liquid component of blood that comprises 55 percent of its volume and causes blood clotting. The blood plasma’s yellowish color may be the reason for the yellow tint inside the fish. 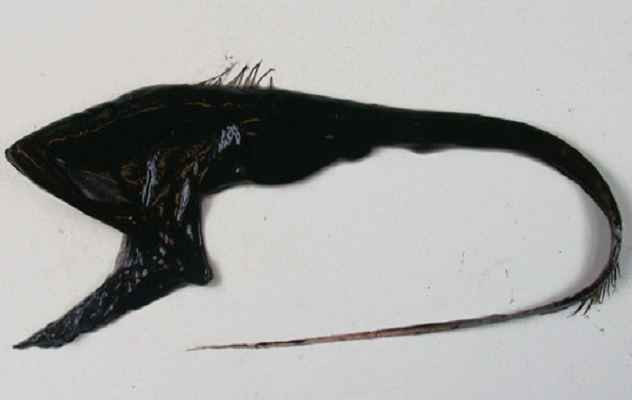 The extraordinarily rare gulper eel, which is sometimes called the pelican eel, lives deep in the ocean. One of the reasons it is so rare is because females lay their eggs in such deep waters that the offspring don’t often survive after hatching.

The gulper eel unhinges the jaws of its incredibly large mouth to swallow equally enormous prey, which are attracted to the brilliant, bioluminescent orbs on the ends of its tail. The prey is then digested in a flexible stomach that stretches to accommodate the size of the eel’s meal. As the gulper eel gets older, its teeth slowly disappear, but its sense of smell skyrockets to compensate. 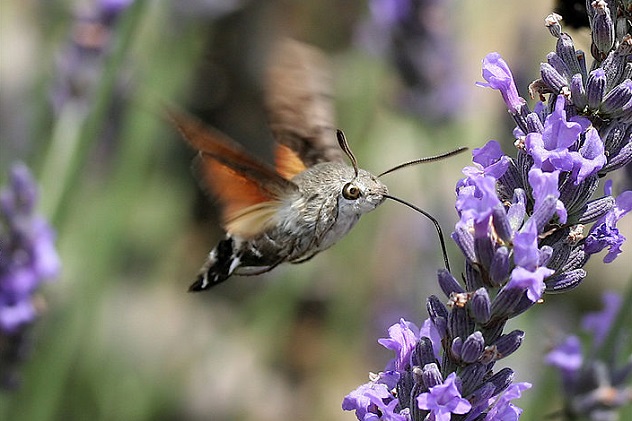 Found almost everywhere in southern Europe and Asia, the hummingbird hawk-moth is, predictably, a moth that looks like a hummingbird. Not only does it have a proboscis just like a hummingbird or a butterfly, it can split into two tubes when they need to be cleaned. A sac in the front of its head expands with air when the moth inhales and then deflates when it exhales, allowing it to suck up nectar.

Along with having a proboscis like a hummingbird, its wings can move just as fast, emitting a similar low humming noise when flying. These moths also have remarkable memories, repeatedly returning to the same 50 flowers. 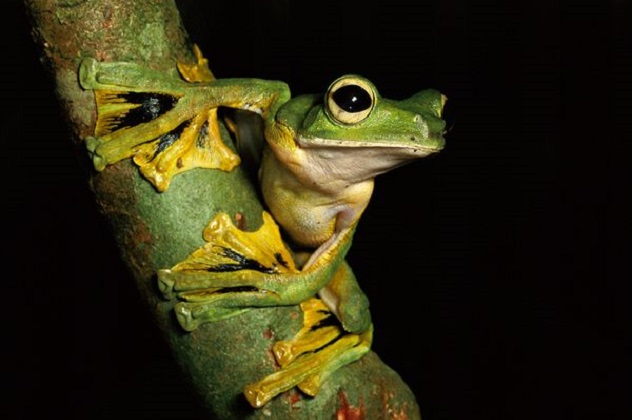 The flying frog is a rare species that only comes down from its tree to mate. Also known as the parachute frog, this species has strong membranes in between its fingers and toes. Scientists originally thought that these webbed digits were used for swimming, because that’s a normal thing for frogs to do, so they were surprised to see the frogs instead gliding from tree to tree to avoid predators.

The longest distance a flying frog has been observed to leap was over 15 meters (50 ft), just enough to make it to another tree or even to the ground. In addition to its webbed digits, the yellow-green amphibian’s oversize padded toes help it stick to the trees for a more secure landing, much like geckos. 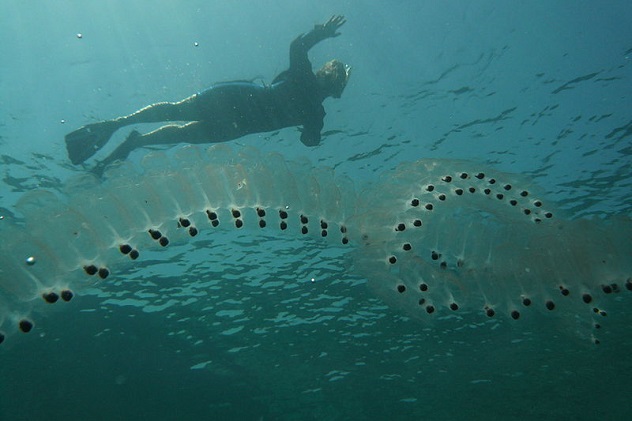 Probably one of the stranger creatures in the world, the salpa is an animal you would swear was an alien. Surprisingly, this jellyfish-looking thing that lives off the coast of California is no jellyfish at all but is actually made up of smaller organisms that stick and work together. Each salp, as they are called individually, is made of plankton and virtually harmless.

These organisms have become more and more abundant in recent years because of their incredible ability to clone themselves at will. These easygoing creatures cause a lot more problems than you’d think, though. They have destroyed two fishing nets after being trapped inside them and even shut down a nuclear power plant in California. Scientists say their ability to adapt to different temperatures of water and immunity to human pollution means they may soon take over the ocean. 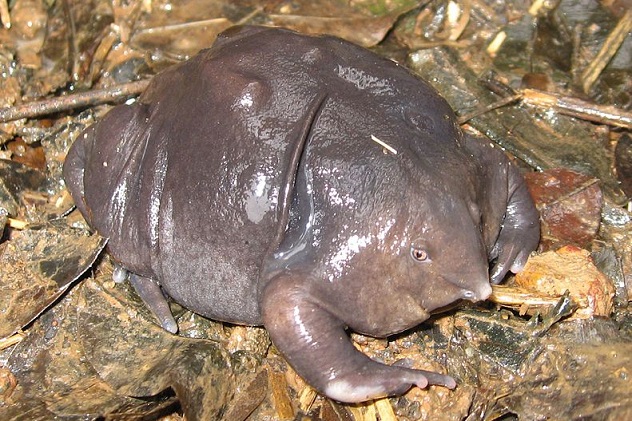 The Indian purple frog, apparently not content simply to be a color amphibians should never be, also happens to have a ridiculous face and plump little body. When these strange frogs are born, they start out as tadpoles, just like regular water frogs. The difference is that these tadpoles have the same trademark pig nose that hangs like a hook off its face.

Scientists believe these strange features developed after living their entire lives underground. Its short limbs are meant to dig through the ground like tiny shovels. They do everything underground, only coming up to the surface two weeks of their entire lives. During those two weeks, the frogs only have enough time to find a mate and breed before they have to retreat back underground, never to be seen again. During this time, the males sing loudly to attract females, the volume of their siren song getting louder as the rain increases. 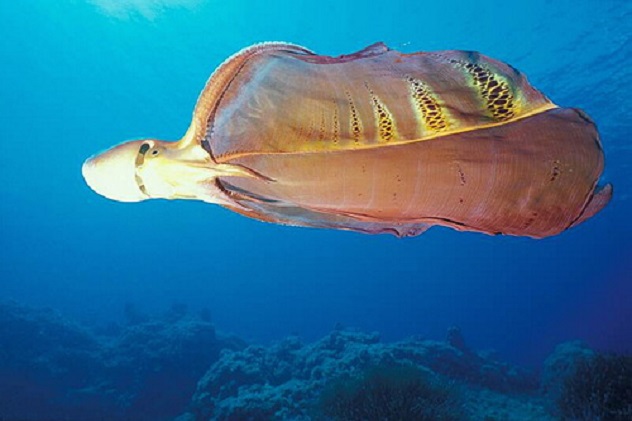 Living in the seas of New Zealand and Australia, the blanket octopus (also known as the Superman or Batman octopus) is almost as rare as the gulper eel, but it lives in much shallower waters. Identifying males and females of this species is easy because the females are nearly 2 meters (6 ft) longer than the males. Its “blanket” is used for capturing prey, but if for some reason the octopus can’t lure a fish with its cape, it can detach pieces of it to make itself “more appealing.”

Not all is well in the octopus world, however. The blanket octopus’s archnemesis is the Portuguese man o’ war, a highly toxic jellyfish. The octopus is immune to the jellyfish’s toxins, but when a female octopus gets in a tangle with these gelatinous masses, they will literally rip off some of their own tentacles to use as weapons. The male has a tentacle specifically for reproduction purposes, falling off once mating has occurred and causing the male to die.