We’ve come from believing that the Earth is the center of the universe to knowing of hundreds of other galaxies, thousands of other solar systems—and possibly millions of planets, discovering new ones all the time. Remembering them all is practically impossible, especially thanks to their incredibly long and complicated names, but the following planets stand out from the rest. 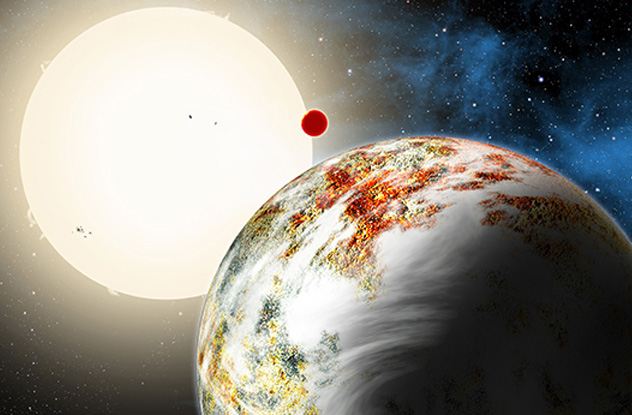 This planet is about 2.3 times the size of Earth, which in and of itself isn’t that big—its size places it in the category scientists have dubbed “mini-Neptunes.” However, the planet has about 17 times as much mass as Earth, which is far more than anyone expected.

The planet’s density proves that it is made up of rocks and other solids, which is a big deal. Normally, a planet of that size is a gas giant, like our own Jupiter and Saturn, because its gravity pulls in so much hydrogen and helium. 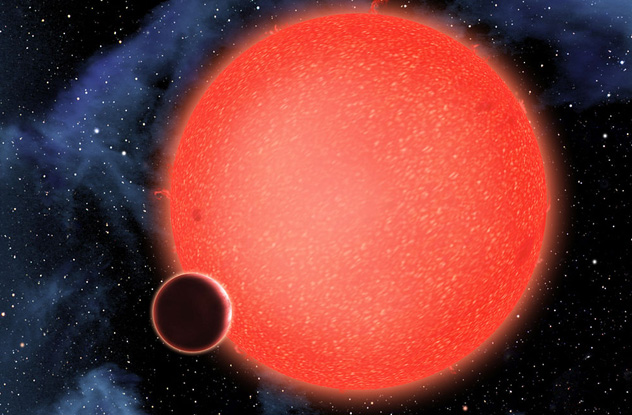 This planet, too, is much larger than Earth. However, this planet’s mass doesn’t come from rocks—it comes from water. Scientists estimate that a huge fraction of GJ 1214b, discovered in 2009, is completely made up of water, even though its surface has a much higher temperature than our own world.

Scientists analyzed the planet’s atmosphere by watching it pass in front of its home star. They concluded that the atmosphere is mostly water, and the surface therefore likely contains much water as well. However, it’s not normal water. Because of the high temperature and pressure, it would be a more alien version of H2O—“hot ice” and “super fluid” water.

The planet was likely created far from its sun, where water and ice were more plentiful. Over time, it gradually moved inward. Scientists believe that they will be able to launch an in-depth study of the planet as early as 2018. 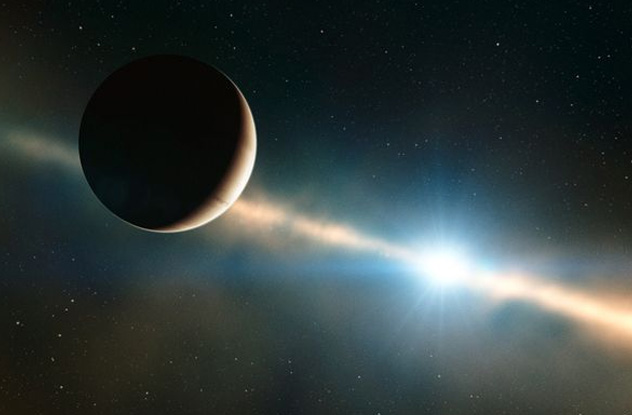 Keep in mind that it’s a stretch to call any planet “young.” This planet is around 35 million years old. However, compared to planets like Earth, it’s practically a baby—Earth is about 100 times older than it. This new planet breaks the record of youngest planet by quite a bit as well. The previous youngest known planet was 100 million years old.

Scientists hope that this discovery will allow us to understand more about how planets evolve, especially because finding younger planets like this one is incredibly difficult. Younger planets are still very active compared to older ones, often sending up intense magnetic fields that generate sunspots and solar flares. These phenomena confuse readings, making it hard to determine if we’re looking at one planet or two. In fact, after studying this planet for many years, scientists are still not sure if this new baby has a twin or not. 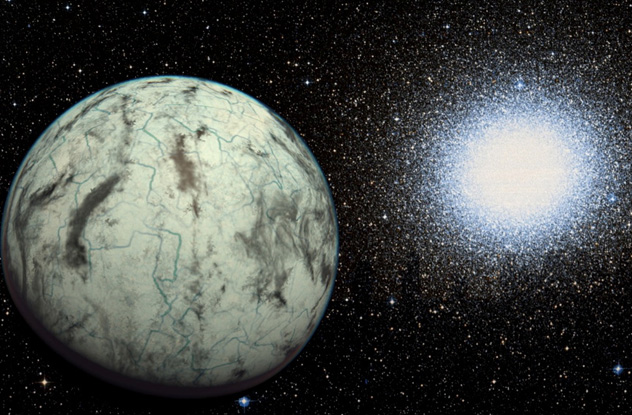 The oldest known planet that might be capable of supporting life formed a mere two billion years after the Big Bang. The world is close enough to its star Kapteyn to have liquid water on its surface, unlike its twin, which is too far out and a frozen wasteland.

The Kapteyn system itself is interesting. First of all, it’s extremely close to our system, one of the closet scientists know about. The system and the planets inside it once belonged to an entirely different, miniature galaxy. Scientists have theorized that our own galaxy, the Milky Way, absorbed this entire galaxy and disrupted it, sending its systems scattering across its outskirts. A remnant of this gobbled-up galaxy exists in Omega Centauri, a galaxy 16,000 light-years away with planets not much younger than Kapteyn B. 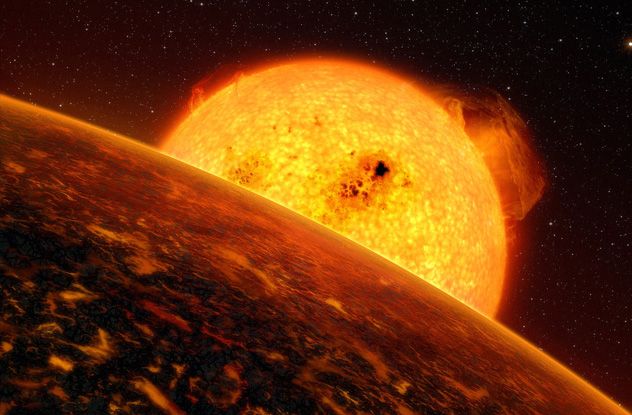 This world weighs about eight times as much as Earth, but it’s less than twice the width of Earth and has one of the fastest orbits scientists have ever discovered.

While our planet takes approximately 8,766 hours to complete its orbit around the Sun, this speedy thing manages to complete its orbit in just 20 hours. While it’s not the hottest planet around (that comes later in our list) it’s definitely a contender. Scientists believe that its scorching temperature of 1,000–1,500 degrees Celsius (1,800–2,700 °F) comes from the lava covering its surface.

This planet is also unique in the way that it was discovered. It was the first planet spotted using the transit method, which scientists use to measure a planet’s mass and radius. Earlier methods allowed scientists to only determine the mass. 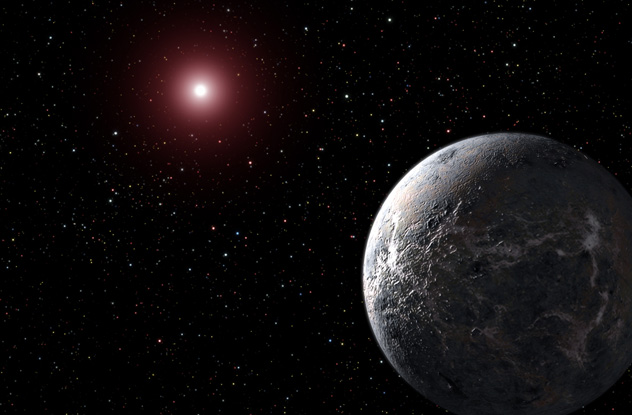 This planet is like the Milky Way’s version of icy Hoth from The Empire Strikes Back. It is the coldest exoplanet ever discovered.

The planet so far away from its star that it takes 10 Earth-years to orbit it, and that star is absolutely tiny compared with our own. The average temperature on this barren world is about –200 degrees Celsius (–350 °F).

This also breaks records as the farthest exoplanet from our own world. It’s more than 28,000 light-years away from Earth. 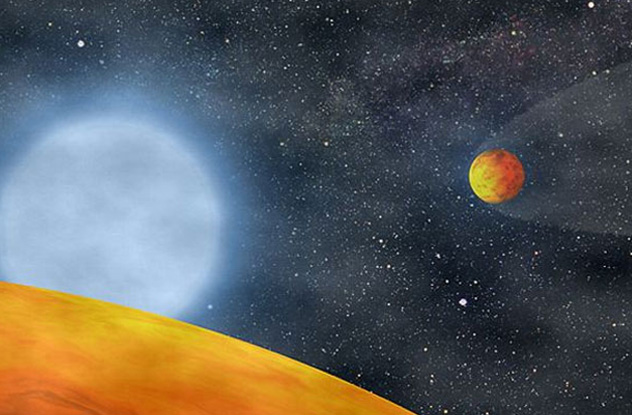 Kepler 70-B breaks not just one but several records. Not only is it the hottest exoplanet we’ve found, with temperatures of more than 7,000 degrees Celsius (12,500 °F), but it also has the orbit closest to its star. The distance between Mercury and the Sun, for comparison, is 65 times the distance between Kepler 70-B and its star. The planet also has the highest velocity and is one of the smallest exoplanets that we know about.

The planet isn’t the only thing breaking records—its star is pretty unusual as well. Normally, when a star becomes a red giant, like this one did, it explodes. However, this star stabilized and shrank back down to average size. Its gas giant planets were shoved out of its atmosphere during the process. 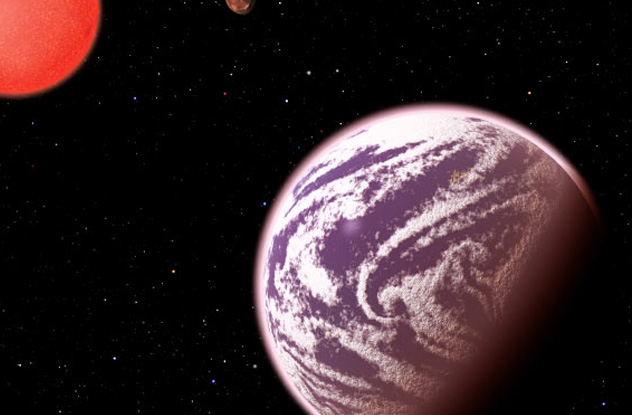 This planet sets the record for being the lightest alien world ever to have its mass and size recorded. Though it is about the same mass as Earth, its large puffy atmosphere of hydrogen and helium makes it about 60 percent larger than our world. In fact, its atmosphere might have once been even larger, but its red dwarf star boiled much of the atmosphere off.

To analyze the planet, scientists compared KOI-314c to its neighbor. The two worlds tug on each other due to their gravity, which causes slight changes in the time each takes to transit their star. The second planet, named KOI-314b, is much denser—it weighs more than four times as much as Earth, making KOI-314c a mere fraction of its weight. 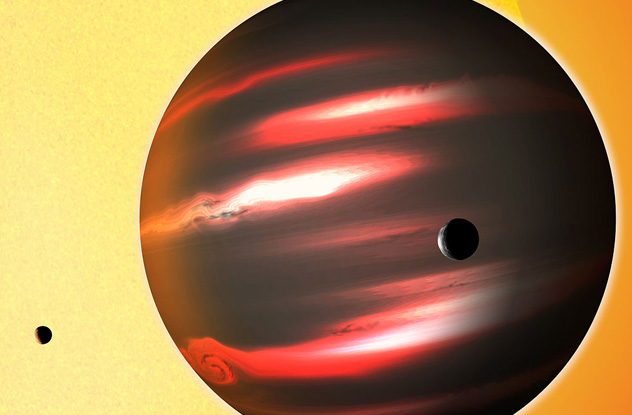 TrES-2b, despite being relatively close to its star, is the darkest exoplanet ever discovered. In our own system, Mercury is considered to be a very dark planet, only reflecting about 10 percent of the Sun’s light, and that’s as dark as scientists believed worlds could get—until they spotted this planet. TrES-2b reflects less than 1 percent of light from its star, making it less reflective than coal or black acrylic paint.

Scientists are unsure as to what could make its atmosphere so dark. Some theories suggest that it could be because of a huge amount of sodium or titanium oxide in gas form. 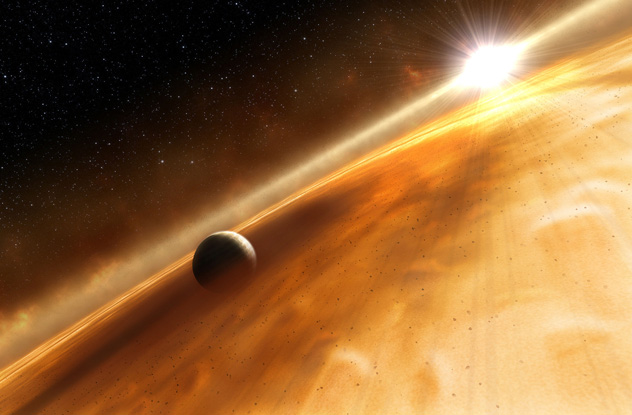 This planet got its eerie nickname when it seemed to rise from the dead. In 2008, it was thought to be a simple dust cloud, but then it rose again to prominence. Not only that, but the planet seems to move like a zombie as well.

Perhaps the planet was shoved out of its original position by a much larger planet. This suspicion comes from a large gap in the cloud of dust and ice surrounding the star, suggesting that another planet might be there.