More so than nearly anything else, political campaigns are rooted to a specific point in history. That’s why our brains don’t shrivel up and die with embarrassment when we stumble across an old campaign poster featuring, say, Gerald Ford as Fonzie—we understand that it was a different time.

But then there are the posters, photo-ops, and slogans that were ill-advised from the get-go. The sort that involved decisions so monumentally dumb that everyone involved probably just wishes the whole world would forget about them. 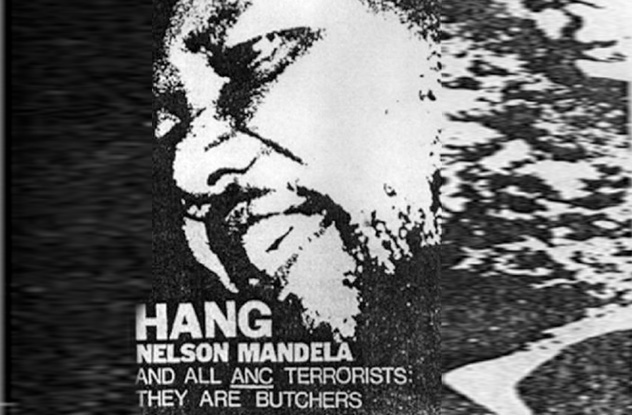 Photo via The Mirror

For a short time in the 1980s, Britain’s Conservative Party was home to a radical offshoot. Known as the Federation of Conservative Students (FCS), it was basically the Tea Party of its day. Like the Tea Party, it was prone to making extreme statements, the most notable of which has to be the time it called for Nelson Mandela to be executed.

In 1985, many members of the British left were wearing “Free Mandela” badges. As a response, the FCS produced its own version, with the slogan “Hang Mandela.” This went beyond an ill-advised joke and quickly transformed into a political position. For a few months, FCS members could buy posters, T-shirts, and mugs calling for Mandela’s immediate execution. At rallies, they notoriously sang songs urging the apartheid government to kill the terrorist in its midst.

Eventually, the Conservative Party rethought the matter and internally banned the merchandise in 1986. The man in charge of the FCS during the debacle, John Bercow, is now Speaker of the Commons in the UK Parliament, a position that required him to lead the official tributes when Mandela died. 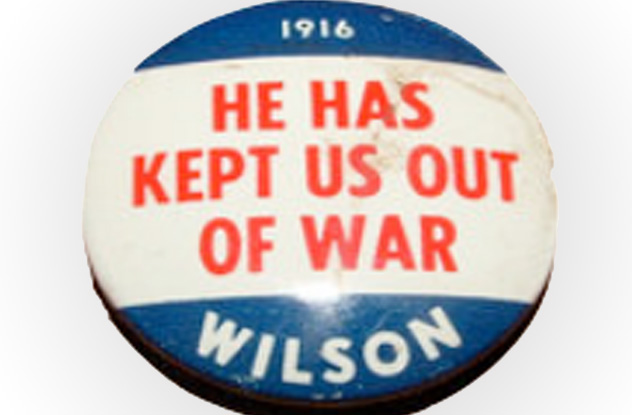 The year 1916 was one of many bad years for Europe in the 20th century. World War I was in full swing, men were dying in trenches, and entire economies collapsed. From their vantage point across the Atlantic, most Americans saw the havoc war was bringing and decided they’d rather keep out of things. Woodrow Wilson’s campaign team capitalized on this feeling, deciding the best slogan to roll with in 1916 was “he has kept us out of war.” Supporters further handed out badges reading “War in Europe, peace in America.”

Less than half a year after he was reelected on promises of neutrality, Wilson brought the United States careening into the fight, making the conflict truly global. Sure, it was the right call—Germany was attacking officially neutral US vessels at the time—but it certainly makes for juicy historical irony.

8 The ‘Stand By Phil’ Leaflet 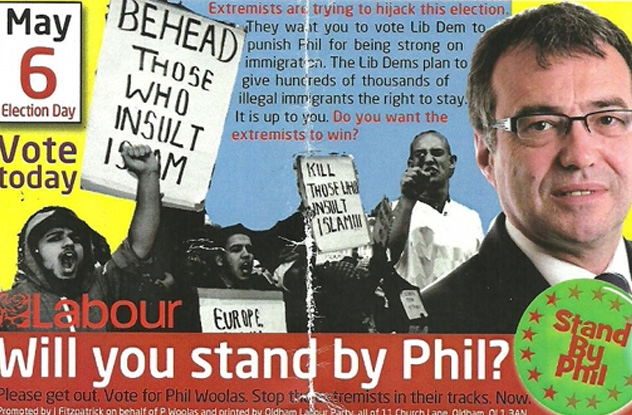 In 2010, Labour Party candidate Phil Woolas was desperate for a parliamentary seat. Realizing that he would almost certainly lose to the Liberal Democrat candidate, Woolas decided to address local voters’ fears about immigration by accusing his opponent of openly supporting terrorists.

His leaflet wasn’t exactly subtle. The main image was a thug holding a sign reading “behead those who insult Islam.” The caption said the Lib Dems specifically designed their border policies to allow such extremists in—despite the party having actually designed no such policies, or any policies, because they’d never been near the reins of power.

By any objective measure, the leaflet was a pack of lies. Woolas wound up in court, had his victory voided, and was banned for three years from further elections. But the real irony was that though the leaflet claimed that the Lib Dems supported mass immigration, immigration under Labour was at its highest in history. The Minister for Immigration at the time? Phil Woolas. 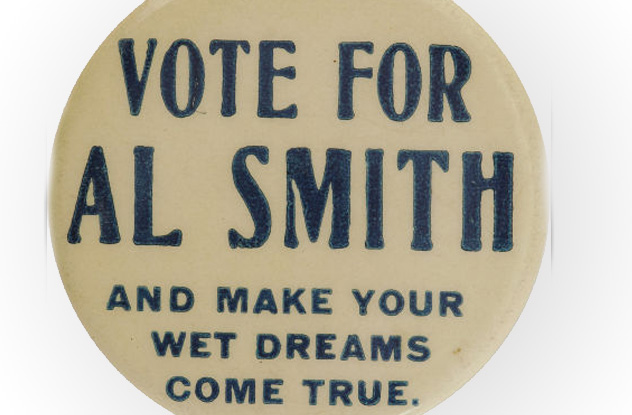 In 1928, former New York governor Al Smith ran for the presidency against Herbert Hoover. The economy was booming after seven years of Republican stewardship, and Hoover was riding high in the polls. This left Smith’s campaign team with only a limited number of issues to focus on, so they decided to choose the most popular: prohibition.

As a firm supporter of people’s right to get wasted, Smith was the self-described “wet” candidate. So when it came time to write his campaign slogan, it seemed only natural that the Torsch & Franz Badge Co. of Baltimore would emphasize this. The result: “Vote for Al Smith and make your wet dreams come true.”

This wasn’t some hilarious mistake based on changing slang. According to Webster’s Dictionary, the term “wet dream” has meant “nocturnal emission” since 1851. 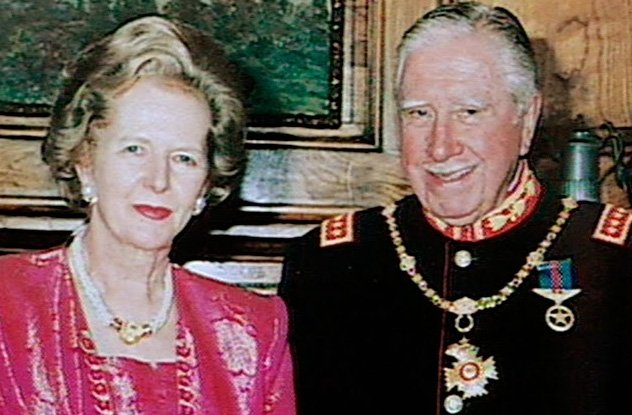 Remember how everyone got worked up in 2004 about a photo of John Kerry supposedly hanging out with Jane Fonda at an antiwar rally? Kerry had nothing on former British Prime Minister Margaret Thatcher. In 1999, the one-time Conservative party leader allowed herself to be willingly photographed visiting the home of Chilean dictator Augusto Pinochet.

This wasn’t just some necessary diplomatic visit the Iron Lady couldn’t avoid. At the time, Pinochet was under house arrest in Britain and faced extradition to Spain for a long list of crimes. Thatcher visited him as a private citizen, told the dictator he’d brought democracy to Chile, and then posed for the weird and creepy photo. Later, at her first Conservative party speech in nearly a decade, she called for his release. A delighted Labour Party immediately branded the deeply embarrassed Conservatives “the party of Pinochet.”

Thatcher had quite a bit of experience with this sort of photograph. There are pictures out there of her cozying up to Hosni Mubarak, King Fahd of Saudi Arabia, and even Suharto. 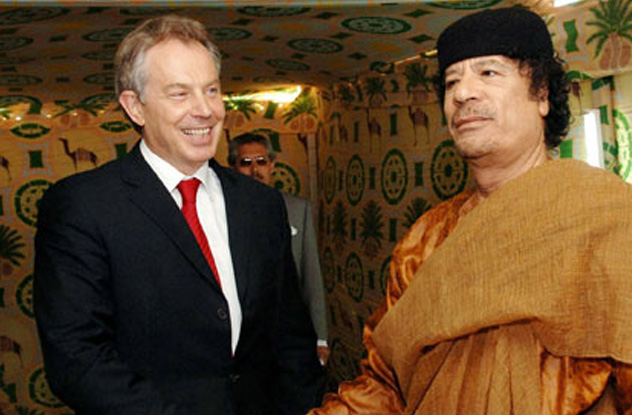 You’d be hard-pushed to name a modern dictator more openly crazy than Muammar Gaddafi. The Libyan madman was famously addicted to plastic surgery and declared himself the “king of kings” of Africa. Less amusingly, he was also responsible for vast amounts of torture, rape, and murder. But there was one name he could always rely on for a show of support: former British PM Tony Blair.

Before he fell back out of favor again, Gaddafi was frequently photographed enjoying Blair’s embrace. The two regularly met, with Blair even going so far as to pen investment letters to the dictator, advising him on how to spend his plundered millions. At other times, he also advised Gaddafi on what banks to use.

Since Blair’s Labour party had chastised Thatcher over her relationship with Pinochet, we can only hope he’s as equally embarrassed about his dealings with Gaddafi. 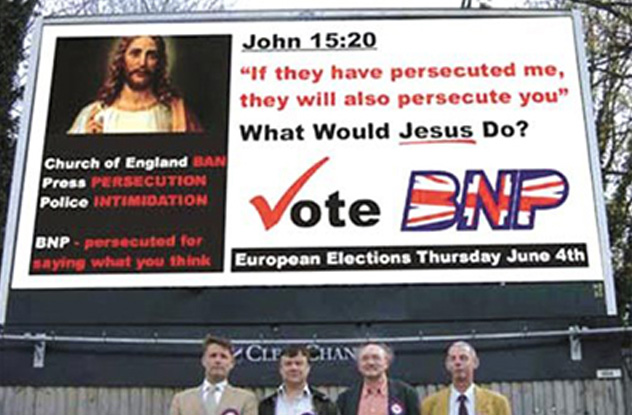 The British National Party (BNP) is a collection of oddball racists and nuts dedicated to the idea of a purely white Britain. Although now a spent force, they not so long ago managed to scoop one million votes in the European elections. But nothing compares to the time they apparently got Jesus to vote for them.

In 2009, the party unveiled a poster that asked “What would Jesus do?” and supplied the answer: “Vote BNP.” They also included a quote from John 15:20: “If they have persecuted me, they will also persecute you.” This implied that a bunch of old white men being challenged on their racism was as bad as nailing the Son of God to a cross.

Archbishop John Sentamu, meanwhile, said a vote for the BNP “was like spitting in the face of God.” 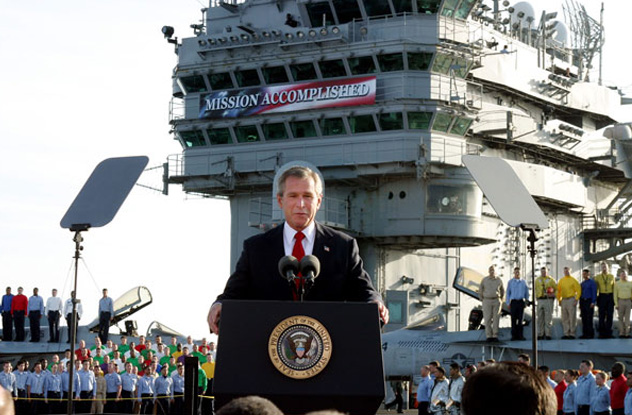 It seems incredible now, but back in 2003, America really thought it had propelled Iraq onto a short path to freedom and democracy. Saddam was gone, and the violent insanity that would ultimately lead to Isis founding its own terrorist state was still over the horizon. It was against this backdrop that one of George W Bush’s most ill-advised photos was taken. Featuring the triumphant president in front of a giant banner reading “Mission Accomplished,” it summed up how greatly the country misunderstood the war.

When Iraq went into violent meltdown only a few years later, the situation began to look less like a bad judgment call and more like history lashing out at such monumental hubris. Fast-forward to 2014, and it’s up there with Herbert Hoover asserting that a vote for him in 1928 was a vote for “prosperity.” 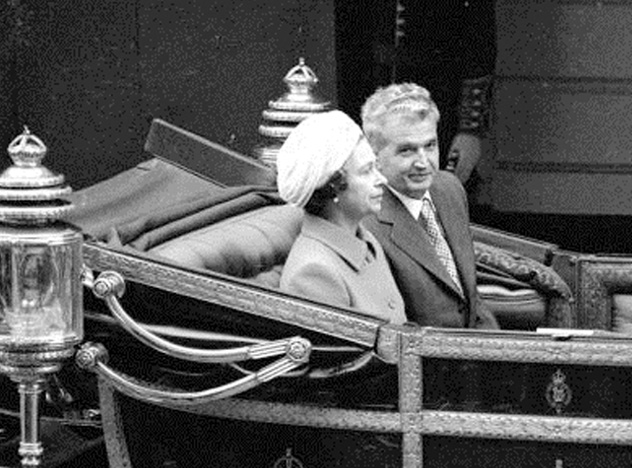 As ruler of Romania from 1965 to 1989, Nicolae Ceausescu presided over one of the most oppressive communist regimes in history, starving thousands and torturing thousands more. So it might come as a surprise to learn he was once the houseguest of Queen Elizabeth II.

In 1978, Ceausescu traveled to the UK to be knighted. As part of the four-day ceremony, he spent a day riding about in the Royal carriage with the Queen herself, waving at crowds like he’d just been made King of England. He was treated like a prince, given a state banquet, and left as Sir Ceausescu—an honor hurriedly rescinded only the day before his execution.

To be fair, the Queen reportedly didn’t like him and was convinced (accurately, as it turns out) that he would try to steal Buckingham Palace’s silver. But the image of the monarch riding around with a bloodthirsty megalomaniac is one the Royal family would doubtless rather forget. 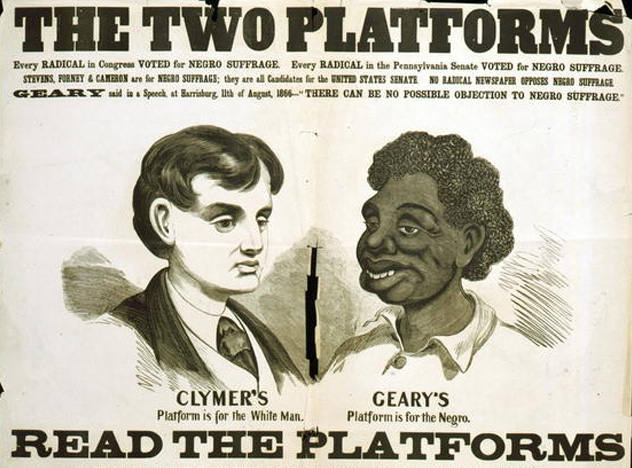 If there’s one campaign poster that the Democrats would like to see buried forever, this is undoubtedly it. Printed in 1866 as the country was recovering from the horrors of the Civil War, it depicts a stark choice between an idealized young white man and a racist depiction of a black man. Known as the “two platforms” poster, it tried to convince its viewers to vote for Democratic candidate Hiester Clymer’s openly white supremacist policies.

Even in the mid–19th century, this was too much for the voters of Pennsylvania. Aside from the poster itself, Clymer’s campaign made overt references to white women’s chastity being at stake and miscegenation being the “final goal” of the Republican Party. Clymer lost spectacularly, although he did ultimately succeed in being elected to the House of Representatives.