Medieval people lived in a time when superstition was fact, and unbelievable things were easily accepted. Nowadays, it’s hard to get such animals as the adorable beaver and the ever-loyal dog wrong, but back then fabulous tales were considered nonfiction. To be fair, they couldn’t exactly hop on a computer and verify what they’d heard. In fact, many of them never even learned to read. The few that were lucky enough to be taught how to read often stayed in much the same place for most of their lives. After all, travel wasn’t quite as advanced as it is today.

Compounding this problem was the fact that very few new works of literature were written during those days. However, stories were well beloved, since they helped relieve the monotony and boredom. People loved stories about animals, and the information often came from “bestiaries”—books that detailed accounts and descriptions of animals. However, they weren’t exactly written but rather copied. People had to rely on the texts of such noted and intelligent people as Pliny the Elder and Augustine of Hippo, who died quite a while before the Middle Ages.

Today, we have websites like The Medieval Bestiary that offer a fascinating look at the often odd ways medieval people perceived common animals. 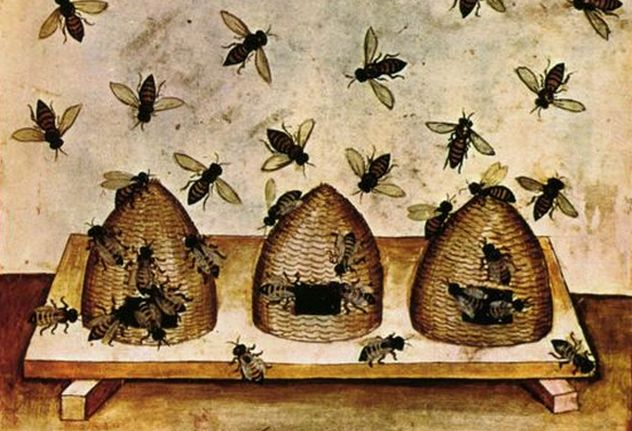 Remember the “birds and the bees” talk? Well, they must have used something besides bees in medieval times. Why? Because, apparently, they didn’t think bees were “born” like normal animals. They were born from the decaying bodies of oxen or calves. Sometimes, it was said they came from worms that spontaneously formed in the bodies of cattle. They also believed the little buggers chose the noblest bee among them to be their king (as opposed to a queen) and that they had wars.

The bees were also thought to have a code of laws based on customs. There was no need for things like punishing the wrongdoers or a death code; the lawbreakers efficiently handled everything themselves. They were thought to punish themselves by committing suicide by stinger, because bee criminals seemingly couldn’t bear to live with their guilty conscience. Also, bees were classified as birds. The smallest of birds, actually. Birds that started out as worms; maybe the ancients appreciated irony as much as we do. 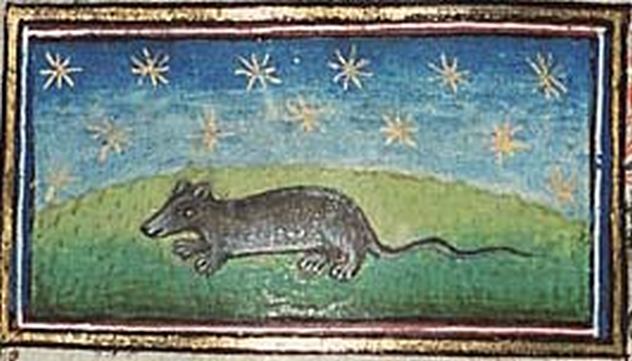 The bee wasn’t the only animal that medieval people thought “just happened.” Everyone knows what a mouse is. It’s hard not to, considering they are just about everywhere. As a matter of fact, there are so many of them that people decided they must come from a source that was just as common as they were. According to the experts of the day, mice came from the ever-present dirt. That’s actually where their name came from—they got mus (mouse) from humus (dirt).

However, not all experts thought that mice were just little dirtballs that decided to grow legs and a tail. Pliny the Elder wrote that mice conceived either by licking each other or by tasting salt. Licking seems a bizarre way to reproduce, but he’s the expert. Pliny the Elder also taught that Egyptian and Alpine mice had the rather unique quality of walking on two legs. If you’re scared of mice, imagine a bipedal, mangy little mouse coming at you. 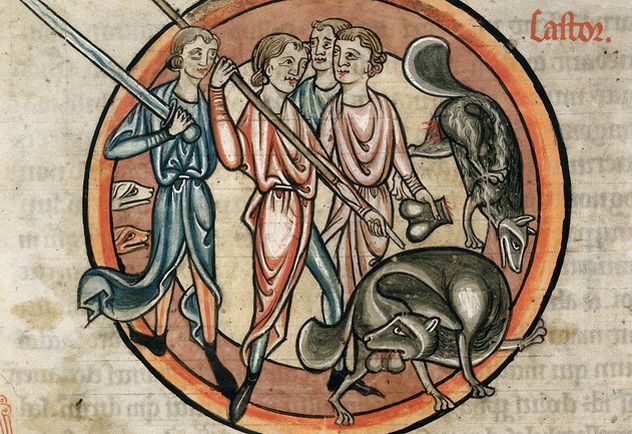 Ah, the adorable little bucktoothed beaver, the bane of trees everywhere, hated by river- and stream-owners alike. If you’ve ever done any beaver research at all, you know they were hunted for their skins. But, according to our group of medieval experts, hunters couldn’t care less for the skin of a beaver. They were after a much stranger, much more disgusting prize: the testicles. The poor animal’s testicles were apparently used in making medicine.

But it gets much, much worse.

See, the beaver must have been quite a life-loving creature. When it was being hunted and knew it would be unable to get away, it made a terrible choice. It would sacrifice its testicles to live. How? It was quite simple. Those teeth that can slice through tree trunks with ease? It seems they were the perfect self-castration tool. The beaver would bite off its own testicles and throw them at the hunter. It would give up its manhood to continue living. But what if the beaver had to go through the stress of being hunted for its “goods” again? It was an easy matter of lifting its leg to let the hunters know that they were wasting their time chasing a eunuch beaver. 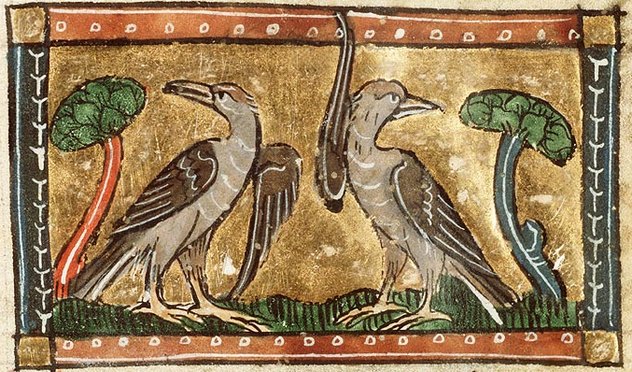 The cuckoo bird. That little bird that comes out of old clocks at the top of every hour? According to the bestiaries, it had some weird habits. For example, the cuckoos were weak and short-winged. This made it hard for them to fly long distances. So the lazy little birds had a solution to this problem: They would piggyback on a kite (the bird, not the toy). We have no idea how they could have done that.

That wasn’t the only example of the cuckoo’s laziness. It appears these birds didn’t like work that much; as a matter of fact, they didn’t even take care of their own young. They’d simply leave their eggs in the nest of another bird and then go on their happy little way. They were not only lazy, but also terrible parents. However, it seems they did do one productive thing: Their saliva supposedly produced cicadas, those annoying little insects that love to keep you up all summer.

It should be noted that some birds actually do abandon their young in others’ nests, and so do several species of the cuckoo (including the common cuckoo). So the medieval writers actually did get something almost right. 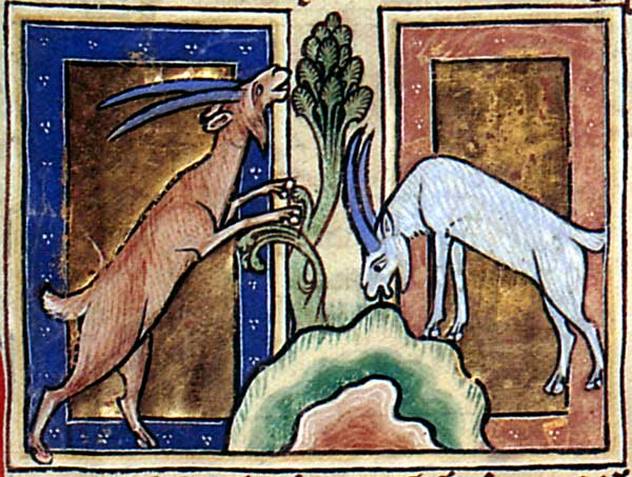 Goats are fairly common animals. We’ve all known about goats since we were little kids, largely thanks to those wonderful stories about trolls under bridges. The medieval drawings and descriptions of goats were actually quite accurate. Well, except for one thing. Apparently, the he-goats were very lusty creatures, and this caused their blood to be extremely hot. So hot, in fact, that it would dissolve diamonds—the hardest natural substance in the world. In the authors’ own words: a stone “so hard that it can be wrought neither by iron nor fire.” We wonder how they went about testing this theory. Also, how’d they go about killing goats if they thought their blood was hot enough to melt diamonds? 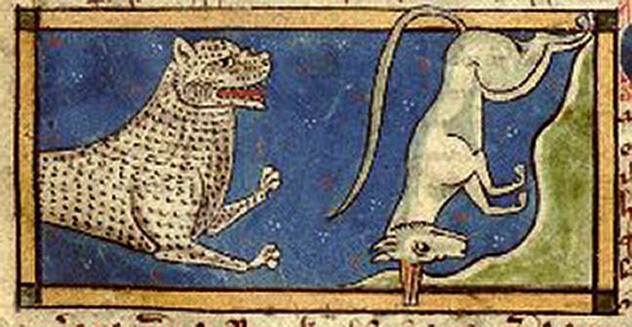 Then there’s the goat’s relative: the ibex. Also called “mountain goats,” the ibex are best known today for hopping around on mountains, oblivious to the fact that a single slip would send them to their deaths. They also possess spiral horns, used for protection against predators and fighting for dominance.

However, the ancients believed there was another use for the horns. They couldn’t believe that an animal could be amazing enough to hop around on mountains without a built-in defense against falling. They believed that if the ibex were ever to slip, it would simply land on its horns (which they assumed were hard enough to not break). The ibex would just shake the fall off, unharmed, and go back to its simple life of being a ninja goat. 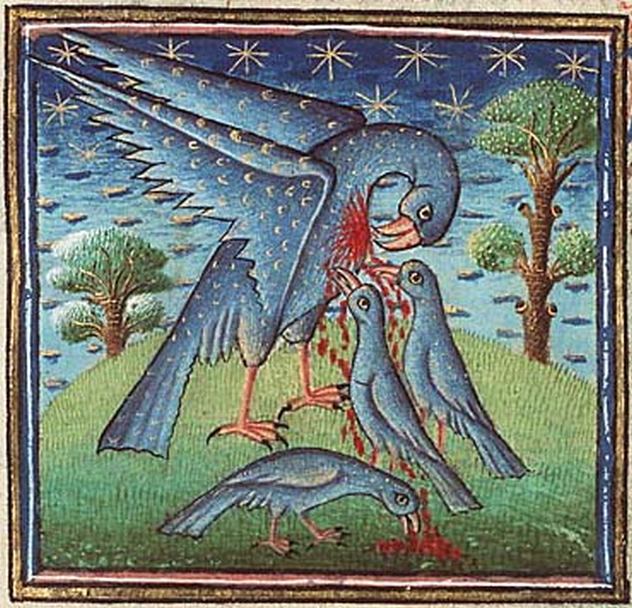 The pelican seems like an innocent enough creature. A pelican was the gentle, if slightly crazy, friend of Ariel in The Little Mermaid. You see them near the sea all the time. They usually seem completely harmless (though they can be rather aggressive). But to people living in medieval times, they must have been terrifying.

Pelicans have baby pelicans. That’s normal. But, according to medieval bestiaries, when their babies pecked at them, the pelicans would lose their anger and strike the babies. Not just a little swat, either; they’d strike hard enough to kill. Yes, they killed their own babies. But it all ended well; after three days, the mom would peck herself until she bled. When the blood of their mother fell on the dead babies, they’d come back to life. But that’s not the only thing the “experts” got wrong. They also thought that one kind of pelican ate crocodiles. Crocodiles! That’d have to be one horrifying bird, a far cry from the adorably clunky one we know today. 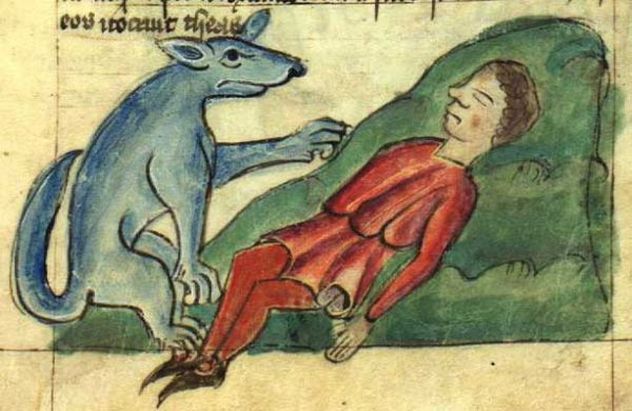 The loyal dog, man’s best friend. All of us know what a dog is. We’ve hunted with them, shared our food with them, taken care of them, and loved the furry goofballs since someone first threw a piece of meat to a wolf. But, if you believe the medieval outlook on them, they’re even more awesome. First, it was believed that dogs were unable to live without men. That said, they were extremely useful creatures. They could cure their own wounds by licking them. But, more amazingly, binding a young dog to a patient would heal any internal wounds.

There are stories told of the loyalty and bravery of dogs. Ever heard of King Garamantes’s dogs? The story goes that this king was captured by his enemies. He was rescued but not by his army or his knights: He was rescued by his 200 dogs. On top of that, the dogs then escorted the king back to his lands, fighting off any who tried to take him again.

And then there’s the story of a man who was murdered. His dog loyally kept vigil over his corpse. The crowd that had gathered around the dead man couldn’t get the dog to leave. The murderer, thinking he could throw suspicion off himself, joined the crowd and went up to the body, feigning emotion. The dog saw him and, recognizing the man as the murdering cutthroat, attacked him. Almost immediately, the killer confessed to the murder so the crowd would get the enraged dog off of him. 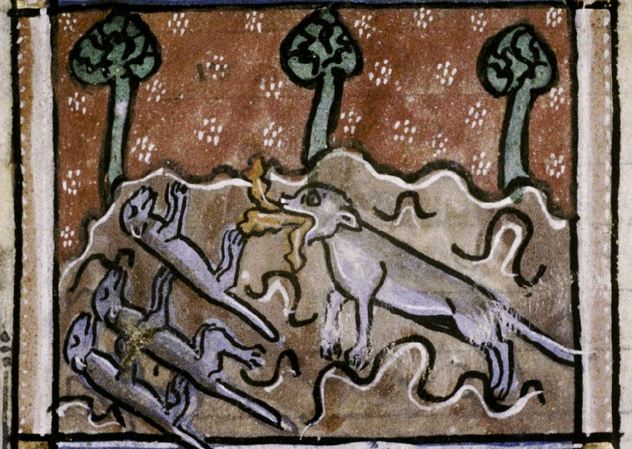 The weasel is a small, ferret-like creature. Most of us probably have at least a vague notion of what it looks like. Medieval folk had far less knowledge of this creature. Or, rather, they had a strange, strange notion of the weasel. First off, it was a dirty creature that wasn’t to be eaten. Not many people today crave weasel sandwiches, so that part isn’t too far off. But then things start to get rather . . . disturbing.

See, the weasel apparently conceived through the mouth and gave birth through its ear. (Some experts claimed the opposite: Weasels conceived through the ear and gave birth through the mouth. It’s hard to say which is worse.) If the babe came out the right ear, it would be a male; if it was birthed out the left ear, it would be a female. Oh, and if their baby was injured while exiting the ear/birth canal? Nothing to it: Since the weasel was skilled with medicine, it could revive its young.

Ever heard of a panther? A picture of a real one can be found here. Looks different than the one above, doesn’t it? Believe it or not, that picture’s closer to the truth than any of the other stuff medieval experts believed about the panther. They described it as a “gentle, multicolored beast whose only enemy is the dragon.”

Here’s how the typical panther’s life went, according to our medieval sources: The panther would feast—on dragons, presumably. After it was done with its scaly meal, it would find itself a cozy cave and take a long catnap; a three-day-long catnap, actually. Then, when it woke, the panther would give a loud roar. While it was roaring, a sweet smell would come out of its mouth. All the animals of the panther’s habitat would follow this odor to the roaring panther, apparently bewitched.

Well, almost all. There was an exception: the mighty dragons. The huge, terrifying dragons would cower in their little hidey-hole, because, for some unknown reason, the panther scared the life out of them. Oh, and the animals that went to the panther after its nap? No one really talked about what came of the bewitched forest creatures . . . but there were only so many dragons for the “gentle” panther to eat.