To prepare for Halloween, let’s look at fauna that could easily find a place in the local novelty shop as dismembered people parts. These are not the odd potato or pumpkin the grew into the shape of a butt. These plants and fungi come out looking like human bits every single time. 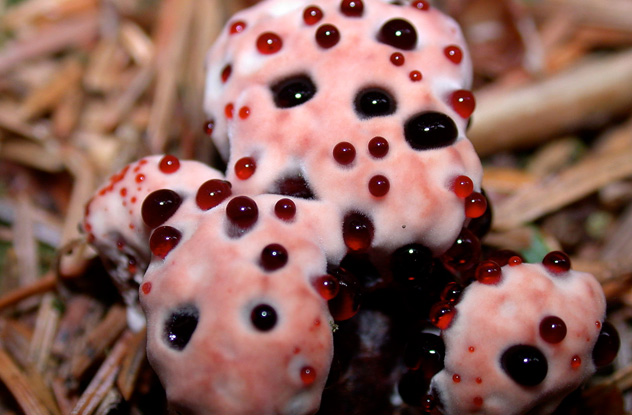 The hood of Hydnellum pecki comes in various shapes, and when it oozes a red, sticky substance, it could easily be mistaken for a bloody tooth dropped on the ground. The substance is sap, forced out of cap’s pores during the night by excess moisture that builds up in the roots. This only happens when the fungus is young.

Another name for Hydenellum pecki is “strawberries and cream,” but don’t eat it. While it is not poisonous, the peppery, bitter taste makes it inedible. The fungus also absorbs from the environment the heavy element cesium-137, a radioactive isotope that could be toxic at sufficient levels. 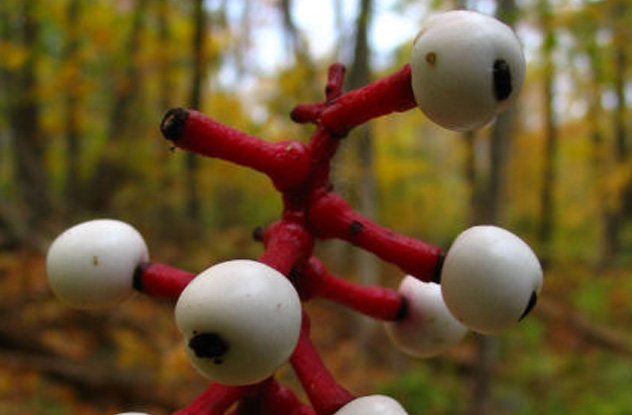 We’ve already documented how deadly Actaea pachypoda is, but its white oblong berries are the truly bizarre part of the plant. The berries sit at the end of red stalks similar to the eyes of Spongebob Squarepants’s boss, Mr. Krabs. The sinister-looking berries are a warning. They have a cariogenic toxin that immediately sedates the cardiac muscle of the heart. Ingestion of them could lead to a heart attack and even death.

The black spot or pupil of the eye is a scar created by the pointed end of the stalk early in the berry’s growth. Each berry has several seeds, and most birds are immune to the toxins. The birds ingest the berries and spread the seeds through their feces.

The leaves, stems, and roots—and even the white, lacy flowers—can all cause skin blisters on contact. If ingested, they cause intestinal inflammation. In sufficient amounts, every bit of doll’s eye can kill a human. 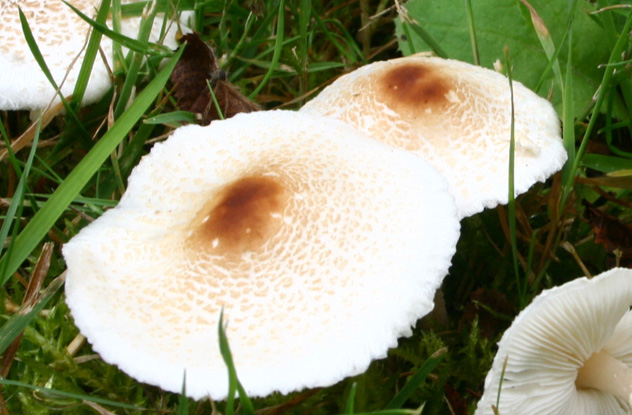 Several different mushrooms have caps that look strikingly like human nipples. Many of these belong to the Lepiota genus. Lepiota boudieri‘s flesh-white cap gradually darkens from ochre to dark brown in the center. The surface appears almost smooth like skin. Covering the surface are thin, brown hairs. When wet, the moisture weighs the cap down so that the stem protrudes, forming a nipple complete with an areola.

Of the more than 10,000 mushroom species, 50–100 are poisonous to humans. About 6,000 people suffer mushroom poisoning every year in the US, but most only experience mild symptoms. Some, however, die from mushroom toxicity. Typically, these fatalities occur when mushroom hunters misidentify a toxic mushroom as an edible one.

Almost all fatalities can be attributed to mushrooms with amatoxin. Lepiota boudieri, like most members of Lepiota, has amatoxin and is extremely poisonous. Until recently, dapperlings have often been called “parasol mushrooms,” especially in Europe. This can be confusing to mushroom hunters because one of the most popular edible mushrooms, Macrolepiota procera, is also called the “parasol mushroom” and can easily be mistaken for the girdled dapperling.

Psychotria elata is a tree found in the tropical rain forests of Central and South America (Panama, Costa Rica, Colombia, and Ecuador). From December through March, bright red bracts—specialized leaves—look like puckered lips smeared with lipstick. The ruby color entices pollinators like hummingbirds and butterflies. As the bracts open, they reveal small, star-shaped blooms and oval berries.

Hooker’s lips (also called “hot lips” or “flower lips”) are a popular gift in Central America to express love. The bark and leaves of the tree are used for earaches, skin rashes, and coughs. Panamanian natives used the plant to treat breathing problems.

Unfortunately, its popularity along with deforestation has driven hooker’s lips to the brink of extinction. An area equal to 200 football fields of Amazonian rain forest is cleared every 15 minutes. One-fifth of the world’s rain forests have been cut down just in the last 40 years. 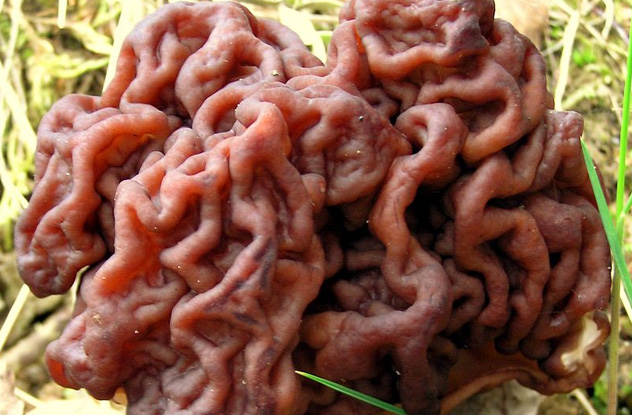 For many American mushroom hunters, the morel (Morchella) is the beluga caviar of the fungus world. It’s so popular that morels are sold for a least $20 per pound while in season. The drawback is that inexperienced hunters do not know the difference between real and false morels, and the latter are highly toxic. About 20 percent of mushroom-related deaths occur after the person ingests a false morel.

There are several species of false morels, and some are less toxic than others. Less toxic varieties are considered delicacies in Nordic countries, where people boil and rinse the morels several times. Despite this, even after preparation, the carcinogenic hydrazine gyromitin remains in minute quantities and poses a health risk to pregnant or lactating women. Some of the symptoms of gyromitin poisoning include diarrhea, severe headaches, nausea, and vomiting. At sufficient levels, gyromitin can cause severe liver damage, requiring a liver transplant to avoid death. Even the steam while boiling false morels is toxic. 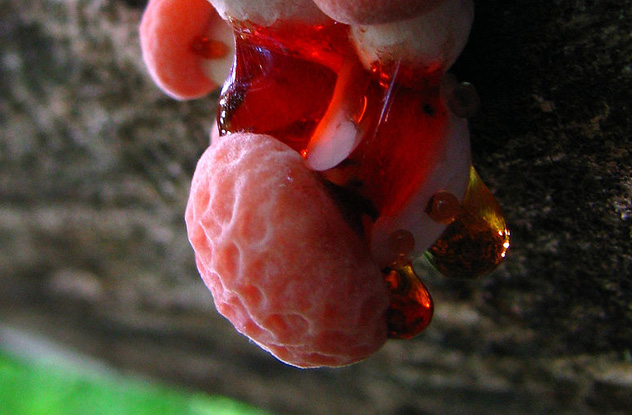 The cap of the wrinkled peach takes on various shapes and colors depending on to the quality and quantity of light it receives in its juvenile stages. Also known as the netted rhodotus and the rosy veincap, the wrinkled peach can look strikingly like a human heart, a stomach, or even a spongy lung.

The surface of the cap is gelatinous and has white ridges or veins with reticulated deep grooves, looking like an internal organ’s vascular system. Beneath the surface, the flesh is firm. Like the bleeding tooth fungus, high moisture in the roots of the wrinkled peach forces red or orange sap through its pores, a process called guttation.

The Rhodotus palmatus grows near rotting hardwoods such as elms in Britain, Ireland, Scandinavia, Italy, Germany, Poland, and North America. The wrinkled peach is monotypic, which means it is the only species of the Rhodotus genus. It has a bitter taste and is considered inedible. 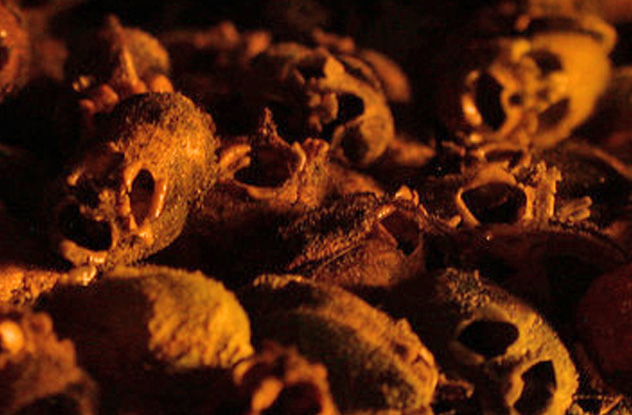 Antirrhinum majus is an annual flower with dragon-like jaws that snap when the sides are squeezed. It’s believed that the snapdragon was originally a wildflower in Spain and Italy, and it has several legends associated with it. One of them is that if a person conceals the flower on their person or in a room, they will appear fascinating to other people. Another legend has it that any house with snapdragons growing in its flower bed will be free of curses and witchcraft.

Any woman who eats Antirrhinum majus will have lifelong beauty and usefulness, say the legends. This, however, is dangerous since every part of the snapdragon is poisonous. To Victorians, snapdragons represented deception, which could originate from how the gorgeous flower contrasts with its macabre seed pod.

In late summer, the petals of the blooms wither and die, revealing green seed pods underneath. Over the next month, the pods turn brown and dry until they burst open, scattering the seeds. Frequently, the seeds fall out through three holes at the bottom of the pod, giving it a skull-like appearance. 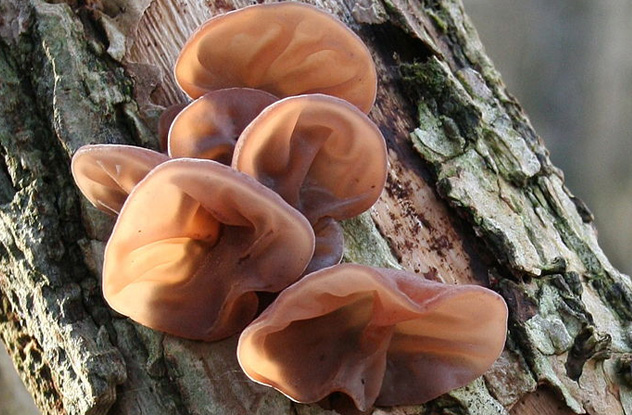 Also called the tree ear or the jelly ear, Auricularia auricula has jelly-like flesh and a cupped, reddish-brown, ear-shaped body. It sports tiny, very fine hairs, and the surface is irregularly veined. They usually grow in groups on rotting or living trees. It has a similar shape to the cup fungus, but the Auricularia auricula is rubbery, not brittle.

The wood ear has been shown to decrease a person’s cholesterol and reduce blood coagulation. Since it’s a popular delicacy in Japan and China, it may contribute to the low incidence of heart disease there.

The Chinese call the wood ear “meat without bone” and have been eating it for medicinal and culinary reasons for at least 4,000 years. A serving of 100 grams (3.5 oz) of dried wood ear has 11 grams (0.4 oz) of protein, 65 grams (2.3 oz) of carbohydrates, virtually no fat, and plenty of iron and calcium. The Chinese use wood ear for everything from hemorrhoids to lung infections. 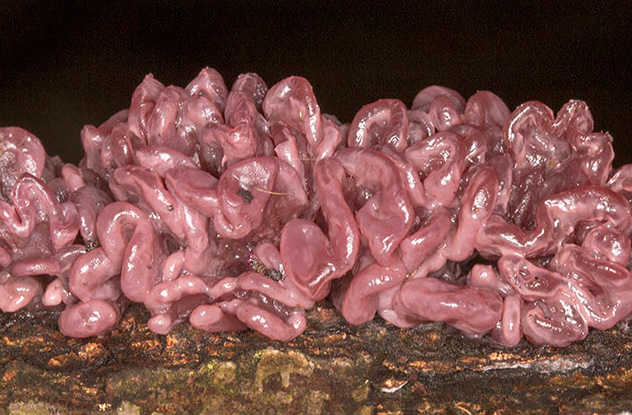 When the jelly-like Ascocoryne sarcoides first grows on a dead deciduous log, it appears as spherical lobes. Later, it flattens into a saucer shape. As the fungi gather in clusters, they press against one another to form a rope-like mass, looking like a tiny person had spilled their small intestines onto the wood. The image is enhanced when the fleshy surface of their bodies are moistened by dew or rain.

In its juvenile stage, the purple jellydisc is asexual, producing cloned conidia spores. Later, as it forms a mass that can stretch 20 centimeters (8 in) in length, it emits both asci (sex cells) and spores that sexually reproduce. It favors broadleaf trees—particularly the beech tree—in Britain, Ireland, continental Europe, and Australia.

Despite its jelly-like appearance (it’s also called “purple jelly drops“), it does not have a distinctive odor or taste and is considered inedible. 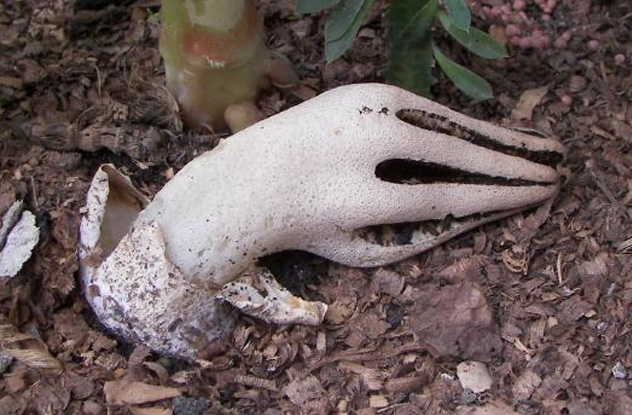 Clathrus archeri, better known as devil’s fingers or octopus stinkhorn, is a truly creepy mushroom. In its mature form, it has four to eight fingers as red as a fire engine with black spheres that resemble suction cups on an octopus’s tentacles. These black spheres are gleba, which emit a rancid smell reminiscent of rotting meat. This attracts flies, which disperse the plant’s spores. The smell explains the “stinkhorn” part of its name.

Like all stinkhorns, devil’s fingers start life in a white, partially buried, egg-like bulb. When it bursts from the bulb, the fingers are white and look like a corpse’s hand and sleeve rising from the grave. Eventually, the fingers stand erect, rising to 10 centimeters (4 in) in height and spreading out to 20 centimeters (8 in) in width. Although it is not toxic, its smell makes it inedible.