Electricity, only recently harnessed by mankind, occurs in the natural world in many surprising ways. Amid the more commonly known examples we can all name exist a handful of surprising and sometimes disconcerting discoveries. Over the course of time, many myths and superstitions have found their roots in electricity. 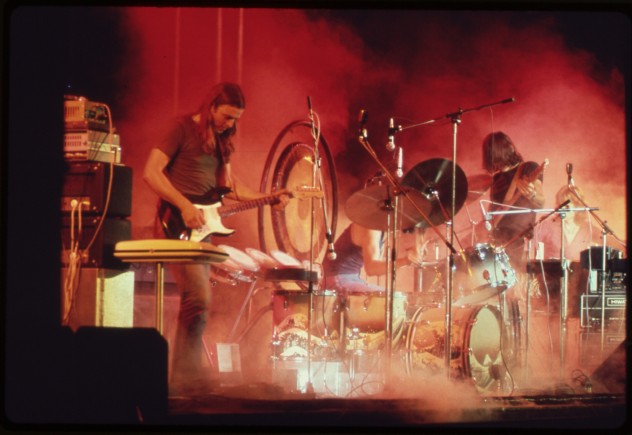 Whistlers, also known as “electromagnetic dawn chorus” because the sounds they produce resemble early morning birdsong, are unearthly sounds reminiscent of early space rock bands such as Hawkwind. Formed in the upper atmosphere during lightning discharges, they may be picked up and recorded with simple equipment by radio enthusiasts. Known as “whistler hunters,” these intrepid radio amateurs often travel long distances to areas unpolluted by power lines and other electromagnetic interference in order to make the best recordings.

Bands like Pink Floyd have used the ethereal sounds as parts of their songs. “Cluster One,” an instrumental track on the band’s The Division Bell album, makes great use of these recordings to create a soundscape hard to achieve with conventional instruments. 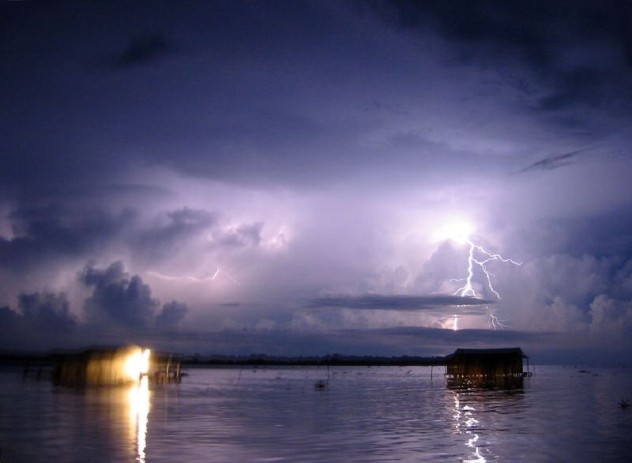 Catatumbo lightning, also known as “The Everlasting Storm,” is the most persistent storm on Earth. Found at the mouth of the Catatumbo River in Venezuela, the ceaseless lightning show has generated many legends and myths among the native population. Flammable methane from the surrounding swamp combined with winds billowing from the Andes creates a volatile environment, causing the incessant lightning strikes.

The intense thunder starts just after dusk and lasts around 10 hours. The lightning strikes up to 20,000 times per night. So intense is this almost-daily storm that it has been identified as the single most active replenisher of ozone into our atmosphere and has been designated a UNESCO World Heritage Site. The lightning itself has been described as a red-orange color and can be seen on clear nights all the way from the Caribbean, but thunder is rarely heard from that distance.

Strangely, the lightning ceased for two months in 2010. The last time this was recorded happening was way back in 1906 and lasted a couple of weeks. The native population breathed a sigh of relief when it once again returned. 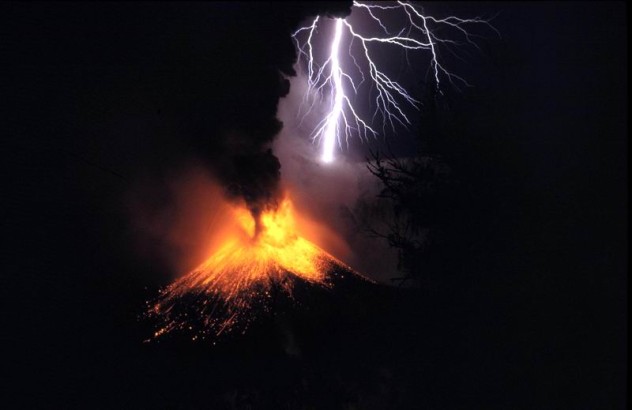 Long contested among scientists, a dirty thunderstorm is a massive electrical storm produced in the plume of a volcanic eruption. Unsure what exactly generates these massive electrical charges, scientists assume particles of ice, dust, and debris rub together and produce enough static electricity to cause these stunning and strangely colored lightning bolts. The plumes of ash support this theory but this don’t explain the bolts that emanate from the mouth of the volcano.

During the course of 2011, there were many dirty thunderstorms in Chile. Many people risked their lives to capture the events on camera. The temperature and density of the plume of ash would suggest any water present that may aid the formation of lightning would in fact be of no use. Scientists are therefore still baffled, and dirty thunderstorms remain as beautiful and elusive as ever. 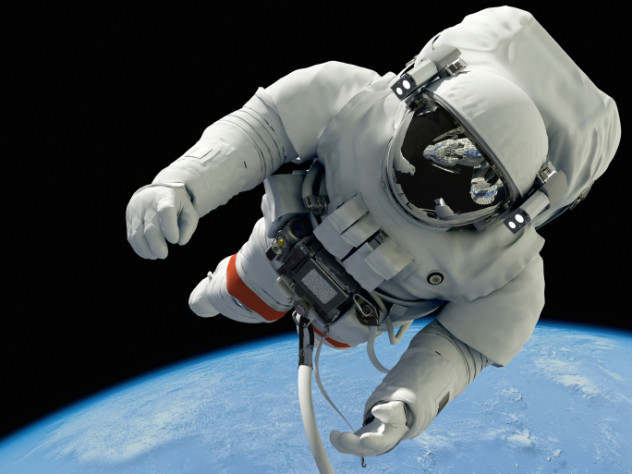 Cosmic rays originate far out in deep space, travel for millions of years, and eventually hit our planet. These rays are absorbed by our atmosphere and are therefore invisible to terrestrial people. But what about the astronauts who travel in unprotected space?

They see lights, even with their eyes closed. This light acts differently than the light we’re used to on the ground. The Apollo 11 mission described it as “spots,” “streaks,” and “clouds,” in their vision every three minutes or so. Although this visual phenomenon is not fully understood by scientists, they do know that cosmic rays travel at high speeds and pass through spacecrafts, through the astronauts’ retinas, and back into space again. The rays aren’t thought to be harmful, but the effects of this barrage of particles is still under investigation.

Triboluminescence describes the phenomenon of light being emitted from a crystalline substance when it is rubbed, pulled apart, ripped, scratched, or crushed. Although this is another poorly understood curiosity, it is thought that an electrical current travels through the material and causes molecules of gas trapped within the crystal to glow.

Practical modern-day uses for triboluminescence include detecting structural stress within buildings wherever it is witnessed. Future uses include finding stress in spacecraft, dams, bridges—in fact, any structure where stress or tension may be an issue.

When our ancestors inadvertently came across this unearthly light source, it was deemed much more spiritual in nature. Native American shamans filled ceremonial rattles with quartz crystals, which would glow and flash when shaken. This no doubt would add a quite powerful atmosphere to their rituals.

You can witness these lights at home. Place some sugar cubes on a plate in a darkened room and crush the sugar with a glass. You should see flashes of light. 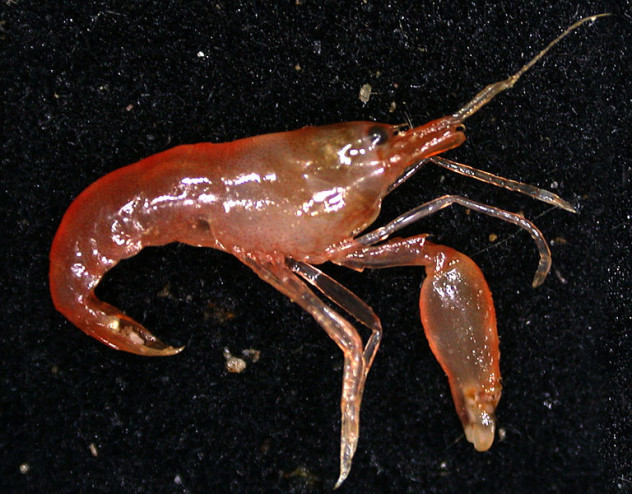 Discovered during the 1930s, sonoluminescence is the production of light by sound waves. Scientists first came across the enigmatic lights while investigating naval sonar. As the sound waves traveled through the water, an eerie blue glow and flashes of light surprised the scientists. Unfortunately, the impending war dampened any further investigation.

Small bubbles in the water expand and and contract rapidly, causing a massive build-up of energy. Every time a bubble collapses, high pressure and temperature are produced and a flash of light is emitted. Why the flash of light occurs under these conditions is disputed, but the theory is that noble gases within the bubble are ionized briefly— like a fluorescent lamp—and return to their normal state as the bubble begins to expand again.

The pistol shrimp is capable of reproducing these flashes of light. The size of your finger and louder than a jet engine, the pistol shrimp uses its claw to produce noise and shock its prey. The noise isn’t the only part of the attack that stuns the prey, though. The pistol shrimp also uses sonoluminescence, producing high-pressure blue light bubbles that reach 5,000 degrees Celsius (8,500 °F). 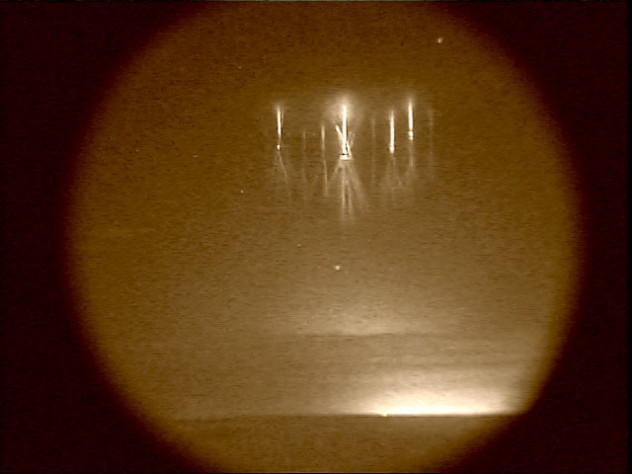 Sprites are massive, bright flashes—usually red in color—that manifest high in the atmosphere. They can measure up to 50 kilometers (30 mi) across. Typically, sprites are formed at an altitude of up to 80 kilometers (50 mi) and occur above thunderstorms. The theory that sprites are a type of lightning has been proven erroneous as they are in fact a type of plasma. They have more in common with a fluorescent tube lightbulb and resemble large red jellyfish with long blue tentacles. Only the brightest sprites are visible to the naked eye.

Although they are rarely photographed from ground level, there are many images taken from aircrafts. Despite their relative harmlessness, there have been cases of damage to scientific equipment based above thunderstorms that can only be explained by the strange and elusive sprites. The most notable example was a NASA stratospheric balloon which inadvertently deposited its payload after one of these bright flashes of light. 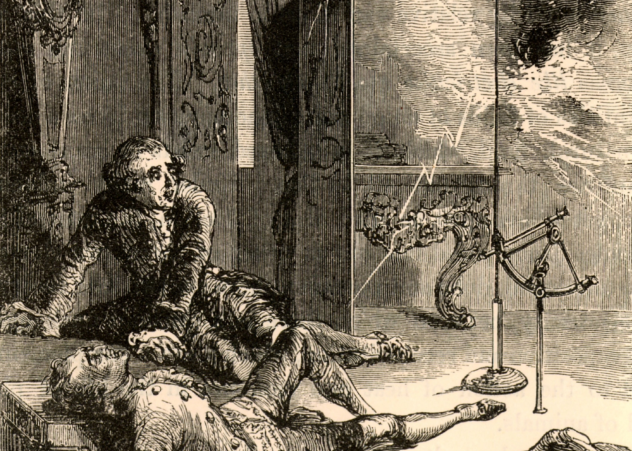 Ball lightning has only recently been taken seriously; up until the ’60s, it didn’t officially exist. Reports of ball lightning have been recorded for centuries. These strange balls can vary from the size of a pea to the size of a small bus. The crackling, fizzing, brightly colored orbs hover a few feet from their surroundings during thunderstorms. In some cases, they may spontaneously and violently explode.

One of the strangest mysteries of ball lightning is the seemingly intelligent behavior they possess. They will frequently enter buildings through doorways or windows, travel down corridors, and navigate their surroundings to the point of avoiding tables, chairs, and any humans they might encounter. This strange awareness of their surroundings has inevitably led many people to believe they are paranormal in nature, or perhaps UFOs.

In December 2012, scientists from Australia claimed to have studied and solved the mystery. They turned their attention toward the many reports of ball lightning forming near windows and now claim that charged particles accumulate on the outside of non-conducting surfaces after lightning strikes. The subsequently generated electric field causes electrons to be pulled from the surrounding gases, releasing photons and creating a glowing ball.

Another study based in China shows evidence that the balls are formed from vaporized dirt. Purely by chance, members of a university in Lanzhou recorded ball lightning being formed on camera and spectrographs after a normal bolt of lightning struck the ground. The spectrograph showed that the ball lightning was made up of silicon, iron, and calcium, all constituents of soil. The theory is that silicon oxide in the soil is vaporized by the intense heat and then reacts with carbon from organic matter, leaving pure silicon vapor. This in turn reacts with oxygen in the air to form a glowing orb. 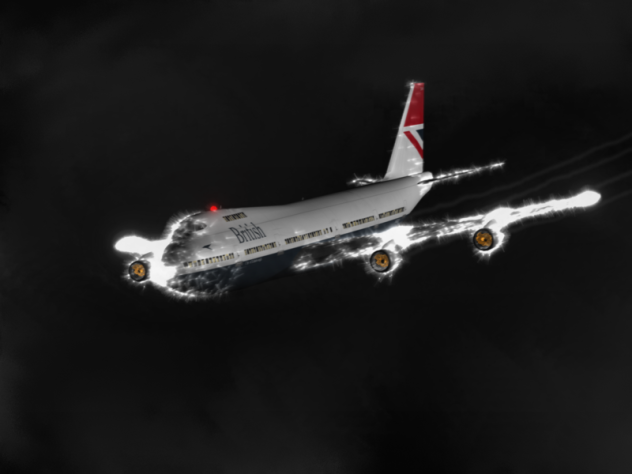 Reported as far back as the time of Columbus, St. Elmo’s Fire was long considered supernatural. Sailors throughout history have spread tales of a bright blue or violet glow surrounding their ships. The glow was brightest high up on masts and often resembled blue flames flickering in a wind.

The sudden appearance of St. Elmo’s Fire—named after an Italian saint—was heralded as a good omen and an answer to the sailors’ prayers. The strange light would appear toward the end of exceptionally bad storms. Soon after the glow appeared, the violent seas would calm and the storm would end. Understandably, after fearing for their lives and surviving, sailors over the centuries have adopted the saint as their personal guardian at sea.

Science has since explained the cause of this unearthly light. St. Elmo’s Fire is actually a form of plasma, similar to that in neon lightbulbs. A difference in voltage between the atmosphere and sea causes ionization of the gases surrounding masts, which then glow. St. Elmo’s Fire has also been seen on church steeples, the tips of airplane wings, and even the horns of cattle.

The most famous item on this list, auroras are magnificent light displays that occur in the night sky. The Aurora Borealis in the northern hemisphere and Aurora Australis in the southern hemisphere derive their names from the Roman goddess of dawn, Aurora, and resemble gently undulating curtains. The most common color witnessed is a bright green, but red, pink, yellow, and blue (the rarest) have also been observed.

Unsurprisingly, many myths and legends surround auroras; one predominant belief is that they are the spirits of the dead and should therefore be respected. Red auroras have been considered omens of war for centuries and were sighted just before the outbreak of the French Revolution.

S J Marshall is a strong believer in the soothing, curative properties of cider. He resides in London.