While Batman is the one grabbing the headlines, he has had two steadfast allies for over seven decades: angst and Robin, the Boy Wonder. Robin, in turn, has enough surprises about his character to fill a bat cave.

10The Second Robin Began As A Carbon Copy Of The First 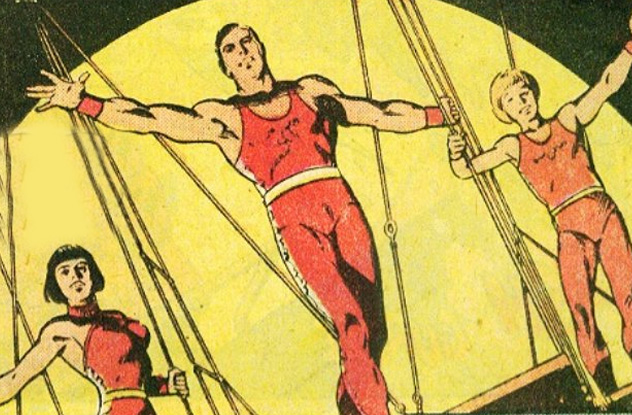 When DC used its “Crisis on Infinite Earths” storyline to compress its confusing jumble of multiple dimensions, it got a chance to reinvigorate older stories that were lacking in originality. One of these stories was the origin of the second Robin, Jason Todd.

The first Robin, Dick Grayson, was a circus acrobat who became an orphan when his parents died using equipment damaged by a mobster. Before “Crisis,” Jason Todd was also a circus acrobat whose parents are killed, albeit by Killer Croc. As with Grayson before him, Bruce Wayne ends up taking the orphaned boy as his ward.

After “Crisis,” Batman meets Jason Todd as an audacious orphan on the streets trying to steal tires from the Batmobile. He places Todd in a school for troubled kids, but when the young man helps expose the school as a front for crime, Batman recruits him as a new crime fighter.

9One Robin Is Actually Batman’s Son 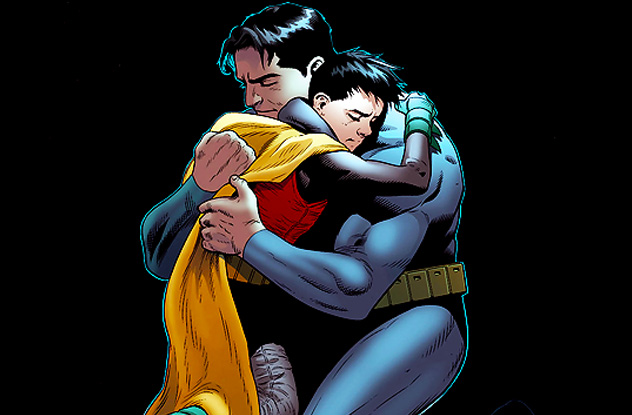 The different Robins have had different relationships with Batman over the years. They have been wards and adopted children, but only one of them has the distinction of being Batman’s biological son.

Damian was the product of a sexual encounter between Batman and Talia Al Ghul, daughter of Batman nemesis Ra’s Al Ghul. While she remembers it as a romantic encounter in the desert (a callback to an old 1987 story named Son of the Demon), Batman remembers being drugged and raped by Talia. Either way, the bat-seed is strong, and with Wayne’s DNA—along with a high-tech lab and a team of scientists—she produces Damian Wayne.

Damian was noticeably rough around the edges by the time he actually met Batman. He had the fighting abilities and deductive acumen provided by Talia’s League of Assassins but lacked the morality instilled by role models like Thomas and Martha Wayne and Alfred. However, Batman helps to redeem the sarcastic sociopath into a hero who helps to save both Gotham and the world.

8Robin Once Brought Back A Zombie Batman 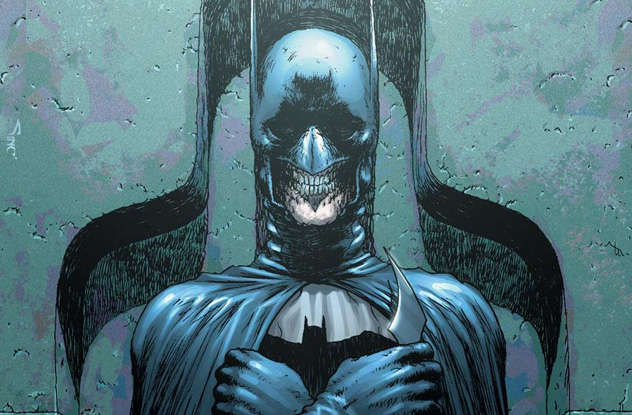 On a long enough timeline, almost all heroes will go through an experience of death and rebirth. Back in the ’90s, Superman died fighting Doomsday, while Batman only had his back broken by Bane. A decade and a half later, though, Batman has a seemingly more fatal experience when he tries to kill Darkseid and is fried by the dark god’s eyebeams. All that remains is a crispy skeleton. Assuming Batman to be dead, Dick Grayson takes up the mantle of the Bat.

Afterward, Grayson comes up with an idea. Batman’s dead, but they regularly fight Ra’s Al Ghul, who dies and comes back to life through mystical chambers called Lazarus pits. Why not throw the Batman skeleton in there and see what happens?

In a world of comic book logic, this is an almost perfect plan. Unfortunately, Darkseid was using his own comic book logic. He zapped Batman with a beam intended to send him through time and ultimately turn him into a universe-killing bullet. The skeleton is actually the remains of some damaged Batman clones Darkseid had lying around.

The Lazarus pit brings back a mindless zombie that tries to kill both Damian Wayne and Alfred. Not exactly the Boy Wonder’s best moment.

7He Is Sometimes A She 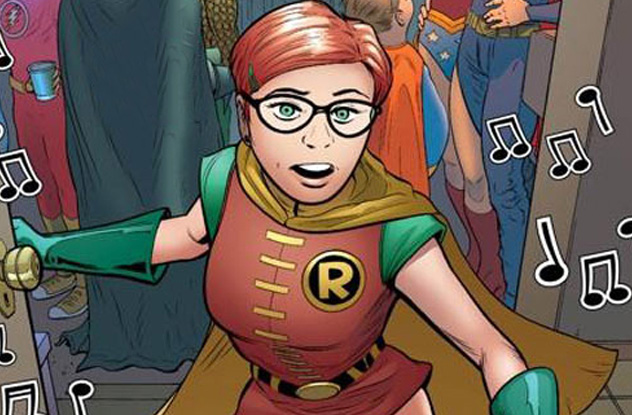 The four Robins of the New 52 DC Comics continuity (Dick Grayson, Jason Todd, Tim Drake, and Damian Wayne) have all been men. However, outside of that continuity, there have been female Robins.

The most famous of these would be Carrie Kelley, the young woman who becomes Robin to help the aging Dark Knight in Frank Miller’s legendary Dark Knight Returns comic. In the less critically beloved follow-up The Dark Knight Strikes Back, Kelley has apparently moved on to other role models and calls herself “Catgirl.”

In the pre–New 52 continuity, a woman named Stephanie Brown served first as the heroic Spoiler, helping Batman and Robin before taking up Robin’s mantle after Tim Drake temporarily quit. Finally, early signs indicate that the first Robin in the consolidated Justice League universe of DC’s films may be a woman, ushering in a new era for girls into the former fraternity of boy Robins.

6The Center Of The First Batman Scandal 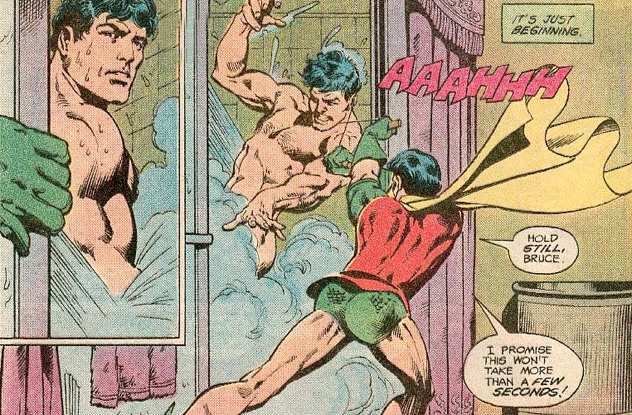 Jokes about Batman and Robin secretly being gay lovers have been around for six decades. They largely started with Dr. Frederic Wertham’s 1954 book Seduction of the Innocent. The book cited Robin’s appearance (the bottom half of the original Robin outfit was basically green underwear). It further cited the living arrangement of Bruce Wayne and “ward” Dick Grayson—two male dudes living happily together—which, to a bigot in the ’40s and ’50s, was one of the scariest sights imaginable.

The age discrepancy between the characters also contributed to his fears. Werthham believed that Batman comics encouraged older men (particularly those with money) to cruise for adolescent lovers. Ironically, these regressive attitudes toward homosexuality inadvertently helped make Batman more progressive in another way. The first Batwoman was introduced as a love interest for Batman, and the first Batgirl as a love interest for Robin, paving the way for some later female icons of DC comics.

5Robin Came Back To Life As A Killer Vigilante 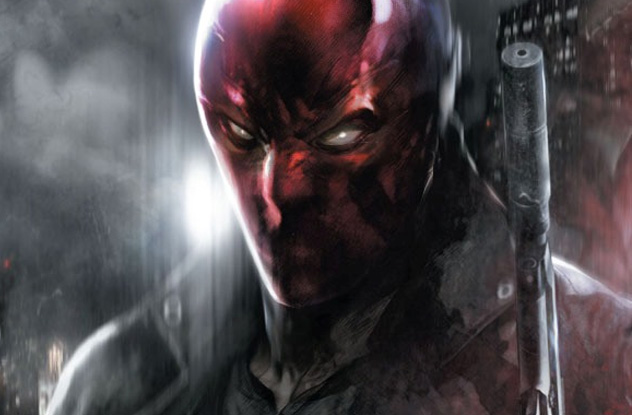 The death of Jason Todd’s Robin was a traumatic moment for Batman, and he carried that guilt for many years. During the memorable “Hush” storyline, Batman’s writers teased the return of Todd’s character. However, it turned out to be only one of Clayface’s disguises, designed to disorient Batman.

Later, however, via the magic of reality-warping punches from an evil Superman, Jason did return. He came back with a very specific agenda: murderous justice for the criminals of Gotham City. Jason used Batman’s training and mixed it with a newfound willingness to kill criminals instead of simply imprisoning them. He fueled his rampage with rage over Batman sparing the Joker rather than avenging Jason’s original death.

Jason’s identity since his return has been in flux. At times, he seems an irredeemable villain willing to kill innocent lives. In more recent comics he is the antihero leader of a super team known as “The Outsiders.” The one constant is that his mask is a Red Hood, an homage to one of Joker’s possible earlier identities and a constant reminder of his own original death at the Joker’s hands. 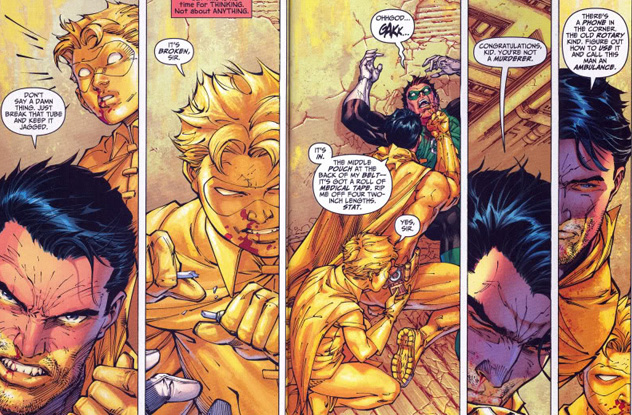 For years, there was one name synonymous with Batman’s renewed popularity, and that was Frank Miller. Before he penned the gritty Elseworlds tale The Dark Knight Returns—about an aging Bruce Wayne leaving retirement to save his city—many people still associated Batman with the campy Adam West TV show. Miller’s tale put Batman back on the pop culture map as a gritty, violent noir hero with a potent psychological edge.

So when DC Comics announced that Miller would be penning All-Star Batman and Robin—the counterpart to the wildly successful All-Star Superman—fans were excited . . . until they read it, that is. The new comics were full of bizarre logic and lines such as, “Are you retarded or something? Who the hell do you think I am? I’m the goddamn Batman.”

Into this universe, Miller introduces a meeting between Batman, Robin, and Green Lantern at a pre-arranged location. Batman has painted everything in the room yellow, including himself and Robin. Yellow is Green Lantern’s weakness, which helps Robin steal his power ring and give him a flying triple kick, crushing his windpipe.

Thanks to some quick combat surgery, Batman and Robin save the man they almost murdered, but it’s still weird to think a superhero with one of the most powerful weapons in the universe was nearly killed by a 12-year-old in short shorts.

3He Protects Gotham From Its Own Apocalypse 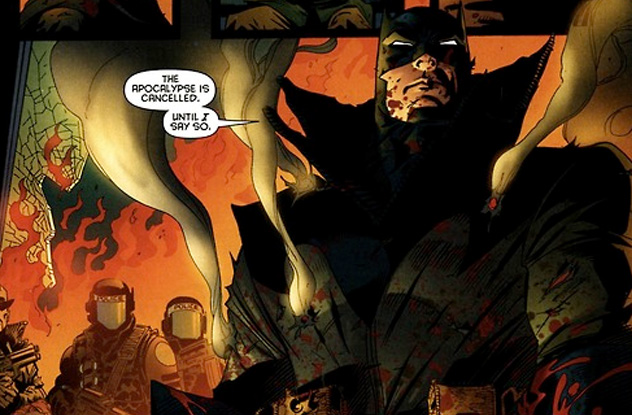 With comics possessing so many alternate universes and tales of what might have happened differently, they offer many glimpses of characters’ futures—futures that may or may not come to pass due to changes in writing teams, editorial decisions, and so on. One of the weirdest possible futures presented in the comics for former Robin Damian Wayne is that he fails to save his father and becomes the Batman of a much grittier and dystopian future.

This future overlaps the world of the old Batman Beyond cartoon in many ways, with Damian often at odds with Commissioner Barbara Gordon and even saving the life of Batman Beyond character Terry McGinnis. Damian’s Batman has supernatural healing abilities and is implied by the comic to have made a deal with the actual devil. With this ability and his trademark ruthlessness, the former Robin saves the entire city from its own specialized apocalypse: a plague of Joker gas. 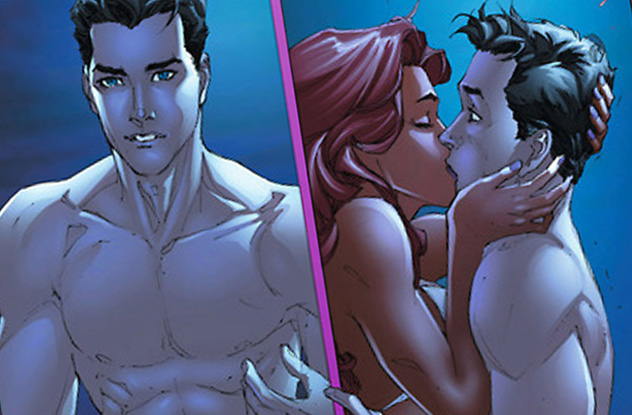 When it comes to love interests for Robin, many people primarily think of Batgirl. Or, like Dr. Wertham, they may think of Bruce Wayne. However, one interesting romance for two of the Robins is the alien-turned–Teen Titan Starfire.

The romance starts when she decides to learn English through the most direct means: kissing Robin right on his mouth. Their relationship is solid as he transitions from being Robin to becoming Nightwing, but it falls apart after she is forced to make a political marriage to help keep the peace on an alien planet. They reconcile in time for the former Boy Wonder to propose, but a wacky intervention from the villain Trigon keeps them from being wed, and the relationship finally ends.

More bizarre is her characterization in the New 52 universe. Now, she’s a sexed-up alien who seduces seemingly every man she encounters, including Red Hood Jason Todd. She’s also sleeping with Roy Harper, meaning that she has the unique distinction of sex with two Robins, along with possibly the quickest record of any hero managing to have sex with literally the entire rest of their team.

1The Robin Turnover Rate Is Insane 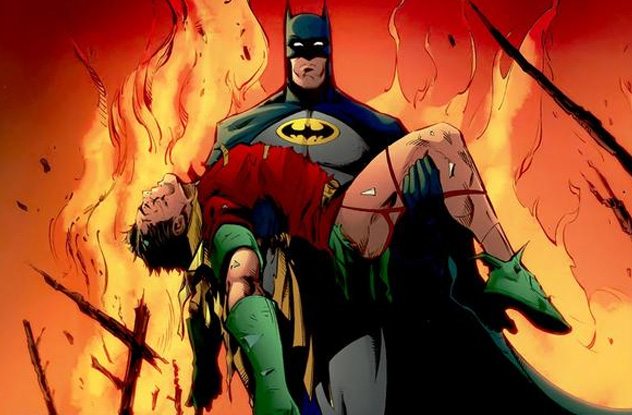 For years, the idea of disposable sidekicks for Batman has been a running joke. Frank Miller probably didn’t help, as he revealed in The Dark Knight Returns that Batman deliberately used a bright yellow icon on his suit to encourage villains to shoot at his most well-defended spot. This makes a lot of sense for a man dressed like a giant Bat, but it has some disturbing implications for dressing his sidekicks in that same bullet-attracting shade of yellow.

However, more than potential death has made the Robin turnover rate insane. Instead, that force is DC Comics.

DC’s New 52 changes were, in part, an attempt to bring in newer, younger readers by compressing the timelines of these heroes’ stories and making them younger. Thus, instead of the usual 10–15 years of fighting crime under their utility belts, most of the Justice League members have only been fighting crime for about five years. Thanks to the popularity of both the comic and his A-list writers, almost all of Batman’s major storylines have been maintained. However, this leads to some logistics problems: Batman has taken in, trained, and lost four Robins in a span of five years. During this time, he was also still lost for a year in thanks to Darkseid, and also had his back broken by Bane.

Depending on readers’ tastes, this either makes less sense than ever (condensing 70 years of Robin into five years of continuity) or is more realistic than ever. How long can a teen boy jump in front of gun-wielding thugs wearing bright colors, all while working for an ultra-violent control freak, and not either get murdered or quit in frustration?