Early in 2014, the UK defense secretary proposed that women be allowed to serve on the front lines in combat. Such proposals have always been followed by unnecessary controversy. People seem to forget that, throughout history, women have had great success as soldiers and spies for their country. 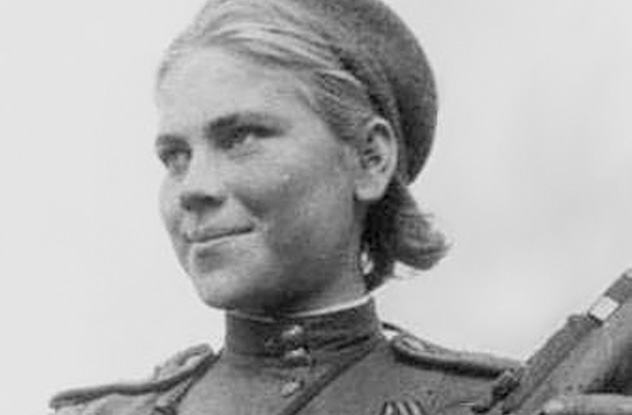 Born into a logger’s family in Russia’s Arkhangelsk Oblast, Roza Shanina was determined from a young age to pursue a successful life. In 1938, Shanina ran away from home, walking 200 kilometers (125 mi) to the nearest town for the opportunity to be educated in the best school possible.

By 1941, Shanina was working in a nursery to raise funds to attend university. However, that same year, Shanina’s brother died on the front line during the war, prompting Roza to volunteer in his place. During her initial training, she stood out for her remarkable shooting accuracy. Although offered a job as an instructor after completing her training at the Women’s Sniper Academy, Shanina insisted that she would fight on the front lines, where she became known as the “Unseen Terror of East Prussia.” She was the first female sniper to be awarded the Order of Glory.

When the East Prussian Offensive began in 1945, Shanina’s platoon was down to only six people, and Roza died protecting the artillery commander. Shanina’s confirmed kill count had, by that point, reached 59. Her diary, though much of it is still classified, was published in 1965 to much acclaim. 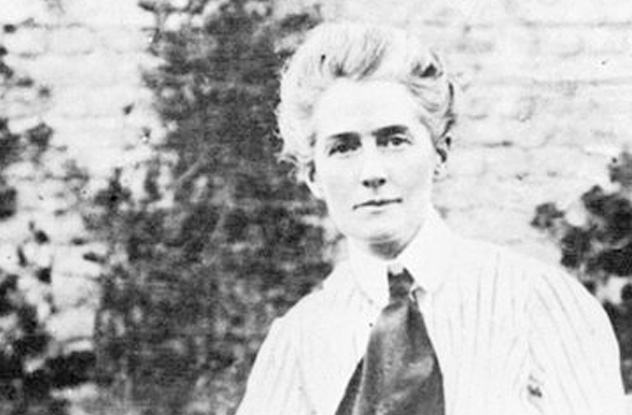 Edith Cavell joined the Great War as a nurse, working for the Red Cross in Brussels, Belgium. She was appalled by the sights she saw during the war and decided to help as many soldiers escape it as possible. Belgium was, at the time, occupied by the German military. Cavell, along with other colleagues, helped over 200 soldiers escape to the neutral Netherlands. She did this by harboring the men in her hospital, claiming that they were injured. Cavell’s partner, Prince Reginald De Croy, then provided false papers and money so that the men could escape to the Dutch border.

Cavell was very outspoken, and the German military became suspicious of her actions. She was eventually given up by a French spy, Gaston Quien, who was working for the Germans. Cavell was arrested and convicted of aiding the Allies, a crime punishable by death in German-occupied Belgium. She was executed by firing squad. 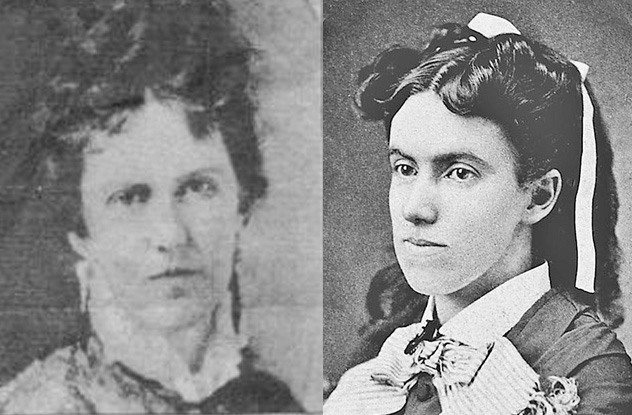 Ginnie and Lottie Moon were Confederate spies, born and raised in Ohio. Known for their beauty, the girls were incredibly popular and had dreams of becoming actresses. Lottie jilted one man, Ambrose Burnside from Indiana (who would later become a famous Union general), at the altar and settled down with James Clark, a judge. Ginnie was supposed to go to school but was thrown out and went to live with her older sister and the Clark family, who had already become deeply involved with the underground Confederate group the Knights of the Golden Circle.

One night, a man arrived with a letter that needed to be delivered to General Edmund Kirby Smith. Lottie volunteered, disguising herself as an old woman using her acting skills, and the mission was a success. Lottie was then able to acquire fake papers that made her a British subject and a pass that allowed her to visit Virginia “for her health.”

Ginnie moved to Tennessee to look after her ailing mother and nursed the soldiers there before volunteering to deliver a message to the Knights of the Golden Circle. However, she was caught and put under house arrest with Lottie for the remainder of the war. 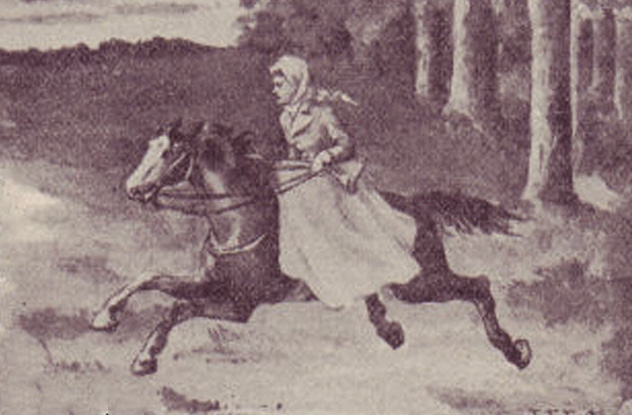 Emily Geiger was born in South Carolina in 1765, a descendant of Swiss settlers. Her father, John Geiger, was ill when the war broke out and unable to go to battle. Because of this, Emily was very keen to serve and fight and thus volunteered to deliver a secret message for General Nathaniel Greene across enemy lines to Thomas Sumter. Greene was charmed by Emily and gave her the letter but also made sure she knew the contents by heart in case she needed to communicate it verbally.

The next day, Emily set off on horseback and told anyone who asked that she was off to see her Uncle Jacob. However, Emily turned out to be a terrible liar, and when she was intercepted by Lord Rawdon’s scouts, she couldn’t stop blushing.

Before she was imprisoned, Emily swallowed the message. She was released soon after with an escort to accompany her to her uncle’s house. When she got there, Emily was able to verbally deliver the message. 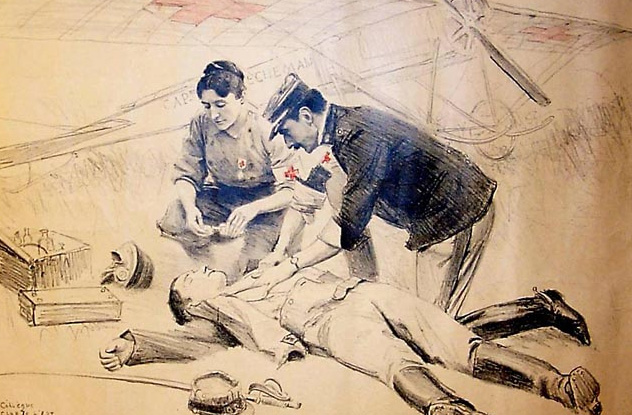 Marie Marvingt was an adventurous young girl from Aurillac, France. Born in 1875, Marvingt became a world-class athlete before she was in her thirties. She won prizes for skiing, skating, swimming, fencing, and cycling. By 1910, she had turned her attention to mountaineering and was the first woman to climb numerous French and Swiss Alps. Most notably, she traversed the Aiguille des Grands Charmoz and the Grepon Pass in a single day.

Before the war even broke out, she won an international military shooting competition. One of her greatest passions, however, was flying, and it was this talent that she brought to the war.

At first, Marie disguised herself. She joined as a male infantryman and later as a pilot flying bomber missions, being the first woman to do so. During the war, she also found time to serve as a Red Cross nurse. After these experiences, she also developed technology to advance the use of air ambulances by adding metal skis for forces fighting in Morocco and Algeria. She received medals from both France and Morocco for her work. 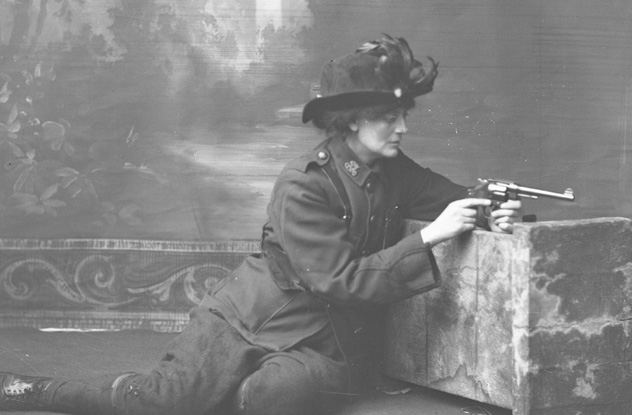 Countess Constance Markievicz was a key member in Ireland’s parliament and one of the first women in the world to hold a cabinet position, but it was her role in the Irish War of Independence that gained her notoriety. As a member of Sinn Fein, Markievicz played a key role in the infamous Easter Rising. Inspired by James Connolly, Markievicz wrote an anthem based on a traditional Polish song.

She also had a role on the front line. She served at St. Stephen’s Green as second-in-command, setting up the barricade. Markievicz’s faction was one of the most successful and held out for six days before surrendering. In 1922, she fought for the Republican cause in the Irish Civil War, defending Moran’s Hotel in Dublin.

Markievicz died not long after taking her seat in the Irish Republic’s first parliament. Thousands of people lined the street in her honor. 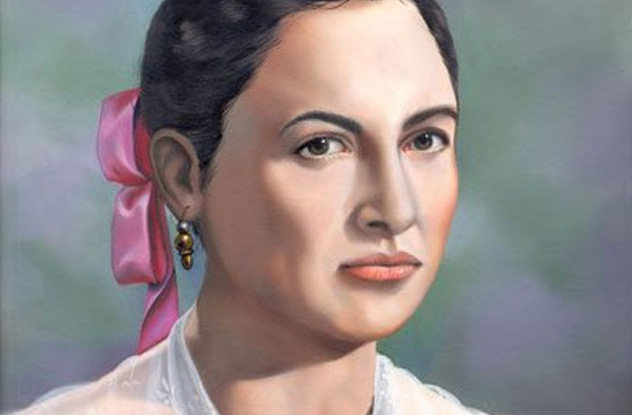 Born in 1765, Maria came from a wealthy Spanish family living in Michoacan and married a soldier, Lieutenant Pedro Advicula de la Vega. Despite the lack of education available for women in the 18th century, Maria had read many authors of the Enlightenment movement. When the Mexican War of Independence broke out, Maria sided with her native country and helped her husband fight for the Mexican cause.

Maria began by delivering messages for insurgents (a role that became very important in aiding communication during the guerrilla fighting) as well as providing resources and beds for soldiers. While Maria fulfilled this role, her husband and her son both joined the forces of Miguel Costilla and both died during the fighting. Maria was not to be any luckier; after being sent to Patzcuaro—one of the heaviest areas of fighting in Mexico—she was betrayed by informants and taken prisoner.

She remained in prison for the majority of 1817, being tortured for information that would condemn other rebels, but she refused to cooperate. In October, she was found guilty of treason and was executed by firing squad after delivering an inspiring speech. 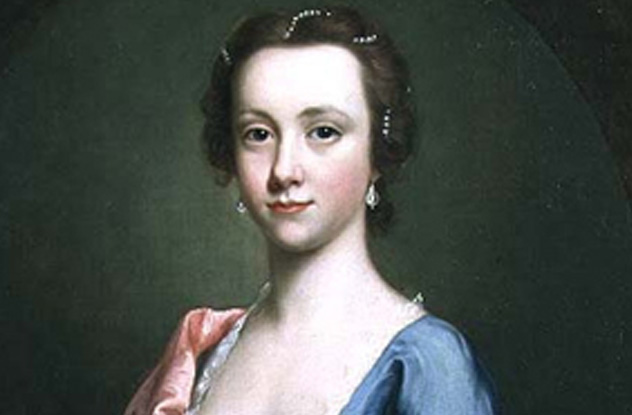 Many women supported the Jacobite risings, but Jenny Cameron gained particular notoriety. The young woman from Edinburgh fought for the infamous Bonnie Prince Charlie. She became so popular that her biography was written in 1746, though this may have been a compilation of stories about at least three different figures with the same name.

After being sent to and from various schools for scandalous behavior, Jeanie returned to Scotland and inherited a wealthy estate from her father. When the wars began, she raised 250 men from her estate and rode them to the prince. She stayed with the prince and her men until they were defeated at Stirling Castle and was thus imprisoned with them at Edinburgh Castle when they were captured. She was finally granted bail after nine months.

There is much debate about what happened next. Perhaps she became the mistress of Prince Charles Stuart and provided intelligence for him. She may instead have married an Irishman and went to live in Ireland, or she lived the rest of her life as a poor outcast. 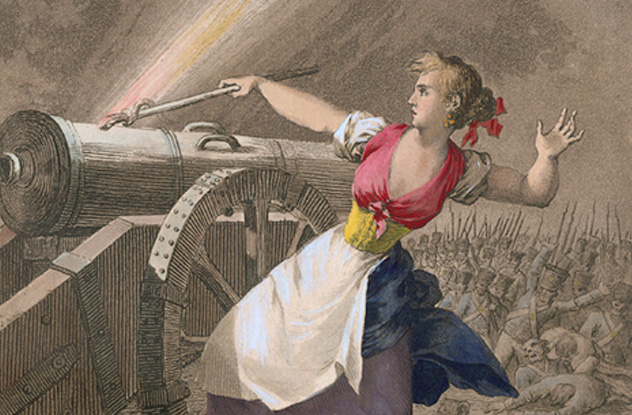 The Spanish woman Agostina Domenech, also known as Agustina de Aragon, became so celebrated that Lord Byron wrote a poem about her. Born in 1786, Agostina defended Spain during the Spanish War of Independence against Napoleon’s forces. She lived in Zaragoza, which was overrun with refugees and was one of the last cities to be seized.

In June 1808, the French forces were battling with the Spaniards outside the city gates, and the Spanish were suffering heavy casualties. Watching from afar and initially only serving to feed apples to the soldiers, Agostina ran into the battle to light a cannon, killing a line of French soldiers. Reportedly, this scene was so incredibly inspiring that hundreds of civilians and fleeing soldiers returned to aid the battle and fight with Agostina. The French were forced to withdraw, though the city later had little choice but to surrender. 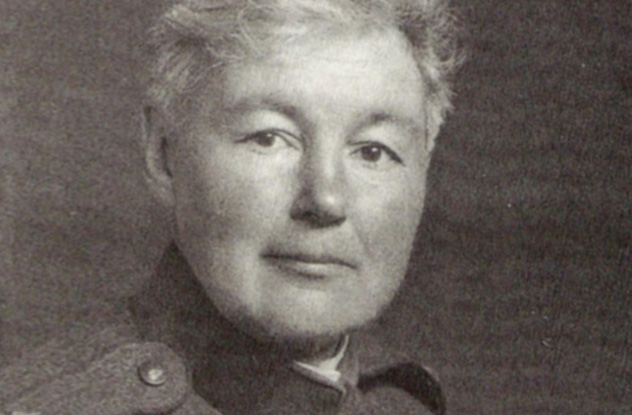 Flora Sandes was the only woman to officially serve as a soldier in the First World War. Born in Yorkshire, England, Sandes had from a young age enjoyed riding and shooting and talked in later interviews of the “misfortune to be born a woman.” However, this did not prevent Sandes from pursuing her goals. In 1908, she became one of the first women to own a driver’s license. When war broke out in Europe, she immediately began training as a nurse. However, Sandes was nearing her forties and was turned down by the Red Cross.

So she traveled to Serbia with a group of other women, performing surgery and running a military hospital. Sandes’s true potential was then noticed by her Serbian friends, and she was enlisted as a private in the Serbian army. She served on the front lines and quickly rose to the rank of captain, commanding the Serbian “Iron Regiment.”

Sandes showed particular bravery after a surprise attack in Macedonia, and she received Serbia’s highest military honor for her actions. During this battle, she was wounded, and the effects of her injury stayed with her for the rest of her life. This did not prevent her from volunteering to fight once again for Serbia in the Second World War, at the age of 65.

Kitty is a history student and likes to daydream. You can read more of her musings at KittyWritesStuff.blogspot.co.uk.