Mass graves are fascinating. They are filled with tens, hundreds, thousands, or even millions of people all buried together. These people are usually casualties of war, disease, large-scale famine, or just the unlucky victims of rituals. 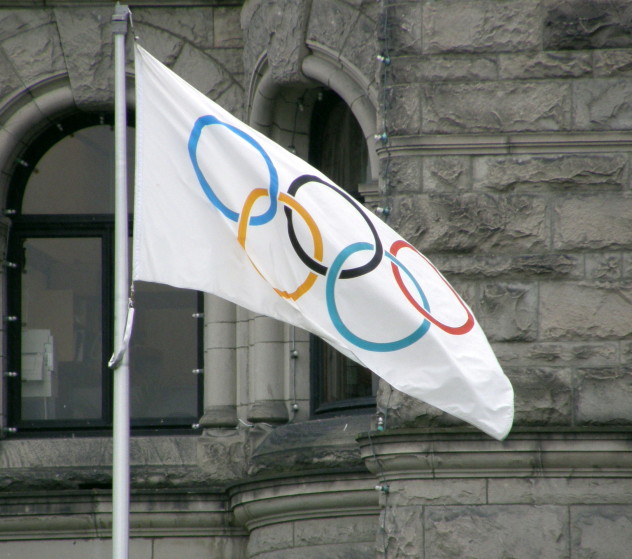 While constructing a relief road for the 2012 London Olympics in 2009, construction workers found an ancient mass grave in Weymouth, England.

At first, there were questions about who the deceased were and how they got there. However, after their teeth were examined, it was discovered the skeletons were not of ancient Britons and Saxons. Instead, they were Scandinavian Vikings thought to have been killed and buried between A.D. 910–1030.

The Scandinavian Vikings had sword marks on their jaws and upper spines, and their heads were cut off and placed neatly beside the bodies before they were buried. This indicates they were executed and were probably war captives.

About 51 headless Vikings were found in the grave, all of them male, with tests on 10 of them revealing they died between their late teens and early twenties. The lack of jewels, weapons, and clothing in the grave shows they were buried naked. 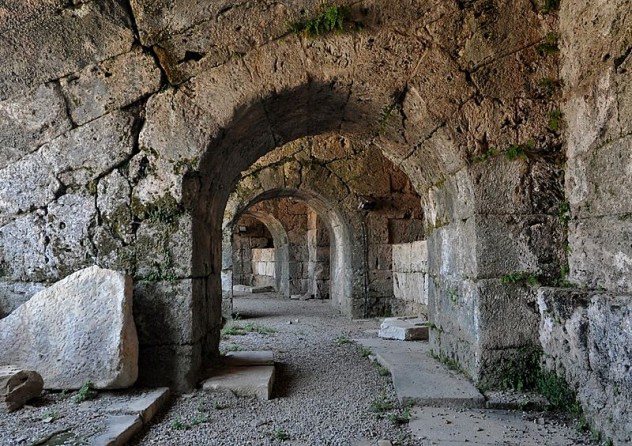 We once discussed the bizarre infanticide tradition of the Roman Empire. These killings were sometimes done as a means of preserving the little food the family had or if the mother was a slave or prostitute to prevent interruptions with her work.

In 1912, an infant mass grave containing the bodies of 97 babies was discovered in Buckinghamshire, England, by Alfred H. Cocks. Cocks failed to investigate these bodies until archaeologist Dr. Jill Eyers saw the remains packed in cigarette cases in a museum archive in 2008 and decided to examine them.

Examinations revealed the babies were buried between A.D. 150–200. At first, Dr. Eyers believed the babies were buried by prostitutes in brothels. However, he later expressed doubts about that as ancient brothels typically killed male infants but spared female ones for ”business.” Nevertheless, there are almost equal numbers of both sexes in the Buckinghamshire mass graves. 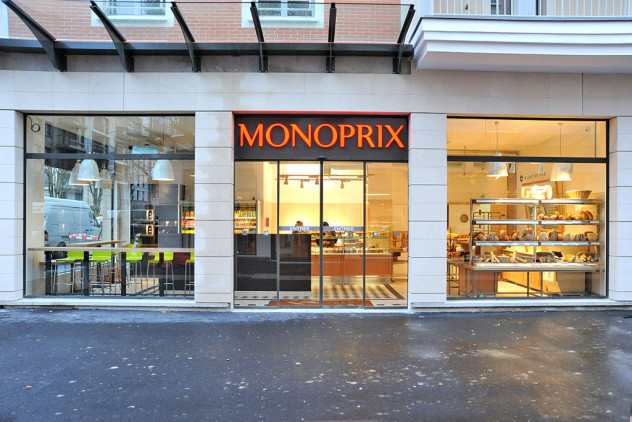 In early 2015, archaeologists were called in to examine the cellar of a Monoprix store in Paris which was about to be converted into extra storage space. They could not have imagined what they found. While they expected to see a few human remains, they found at least 200. Eight graves were found at the site, and it is very possible that more would have been found if they had dug further. Most graves had up to 20 bodies, but one had over 150.

The Monoprix store itself actually stands on the site of an ancient hospital called “Hopital de la Trinite” which operated from the 12th to 17th centuries. The bodies seem to have been buried at about the same time, giving the impression that they were victims of a mass epidemic, most likely the plague that occurred in Paris between the 14th and 16th centuries. 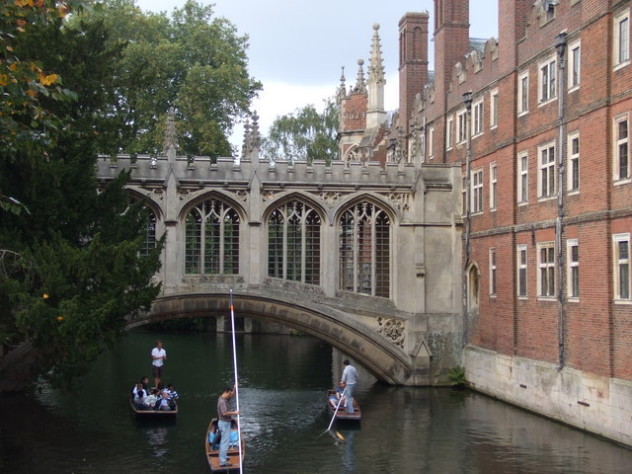 Underneath St. John’s College at the University of Cambridge lies a mass grave. It was first evacuated in 2011 and is said to contain at least 1,300 remains.

The grave under Old Divinity School at St. John’s College is believed to have been dug between the 13th and 15th centuries. The site where it was found was that of an ancient hospital burial ground. The hospital was run by monks and catered to the diseased poor and the homeless with pregnant women and lepers excluded. It is believed most of the bodies are those of dead patients.

Confirmed to be “one of the largest medieval hospital cemeteries ever discovered,” the cemetery had around 400 skeletons in a good state with all the remains neatly arranged. Only a few valuable possessions were found in the grave. Also found around the grave was a well-used path suggesting the cemetery was well preserved. 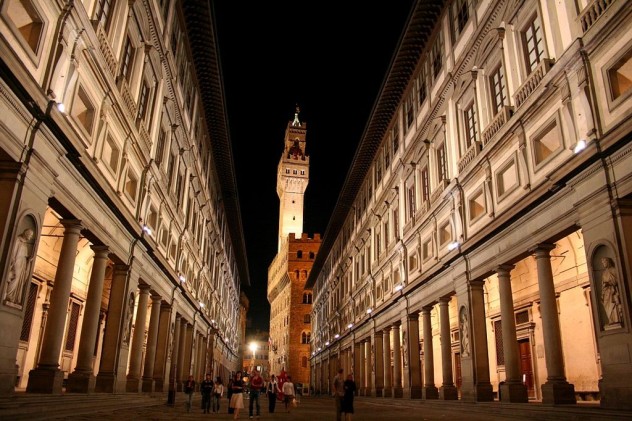 The bodies bore no mark of injuries, burns, or scars, nor were there signs of malnutrition, leading archaeologists to believe the bodies were not victims of war, famine, or violence of any kind, but they were rather victims of an early epidemic like the Black Death. Another sign that they were probably victims of an epidemic is the fact that they were apparently buried at about the same time.

It is believed the Uffizi mass grave represents a minute portion of a larger burial site and that continued digging will lead to the discoveries of hundreds, if not thousands, of bodies. 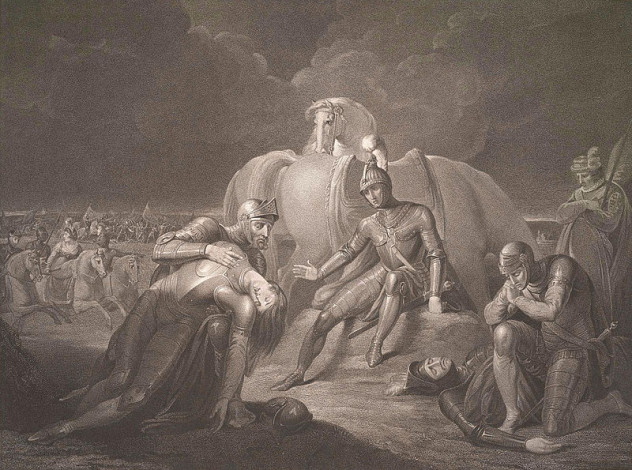 Ask anybody about the Battle of Towton, and you’ll likely be rewarded with a puzzling look. Famed as one of the largest and possibly bloodiest battles ever fought in Britain, this forgotten battle was between the house of Lancaster (which supported the reigning King Henry VI) and the house of York which supported Edward, son of the assassinated Duke of York. The battle resulted in the death of about 28,000 men.

In 1996, a mass grave was discovered by some builders at the Towton Hall a mile away from the ancient battle area. Of the 40 skeletons found, 28 were still in good shape. The skeletons bore great signs of violence. The dead soldiers had their clothes removed before they were thrown into the pit. Carbon dating proved they died around the time of the Towton battle, leading archaeologists to the conclusion that they are most likely dead soldiers of the war. 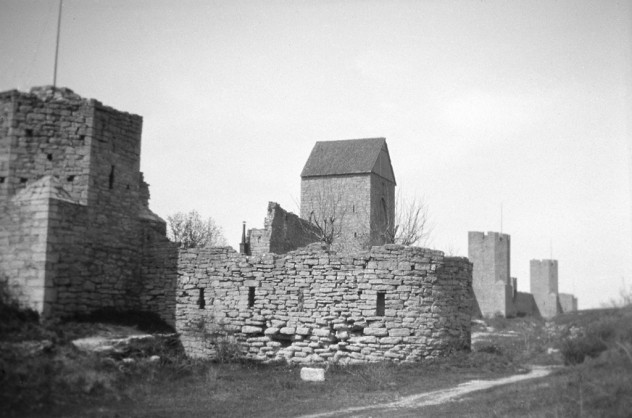 The Danish King Valdemar IV invaded Gotland Island in 1361. King Valdemar IV chose to invade the island because of its diversity and wealthy citizens. Gotland had no army and relied on the king of Sweden for protection in case of war. A group of Gotland peasants tried defending the island against the Danes. The Danes were well trained and prepared, and they mercilessly slaughtered the peasants. Gotland quickly surrendered to prevent further deaths.

Archaeologist Oscar Wennersten uncovered a grave with 300 bodies in 1905 outside Visby’s city wall in Sweden. Between 1909 and 1928, Swedish archaeologists Bengt Thordeman and Poul Norlund uncovered a total of 1,185 bodies in Visby from two mass grave sites near the earlier one. The bodies in these graves were randomly thrown in. However, about 20 bodies were known to be neatly arranged in the grave. Unlike the Towton mass graves, the soldiers in the Visby grave were buried with their armor on. 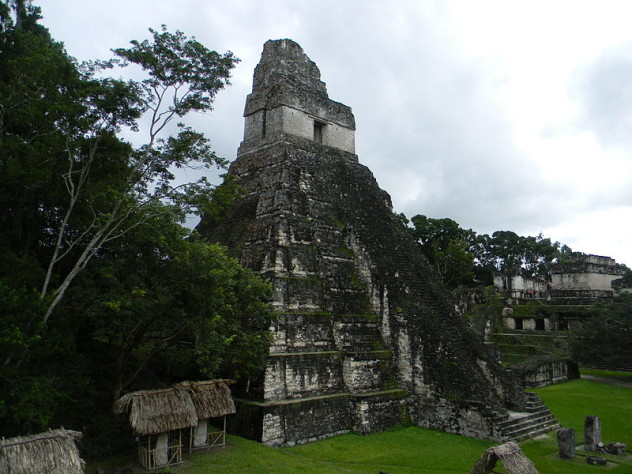 A mass grave was found in an ancient artificial cave at the site of a historical Mayan city by archaeologist Nicolaus Seefeld and his colleagues while researching the water system of an ancient city called Uxul. The grave was formerly a water reservoir before the dead Maya were buried in it. Artifacts found in the cave suggested it was built sometime in the seventh century.

Twenty-four corpses were found in the grave with their skulls scattered around. The skeletons were found in good condition owing to the fact that the bodies were sealed in a clay layer. Of the 15 skeletons analyzed, two were female, and all were estimated to be between the ages of 18 and 42. The bodies in the grave are suspected to be those of Mayan captives or opponents, with other evidence pointing to the fact that they might be members of an Uxul royal family.

Results showed the victims were beheaded and butchered. It also showed they were apparently buried at about the same time in the artificial cave. 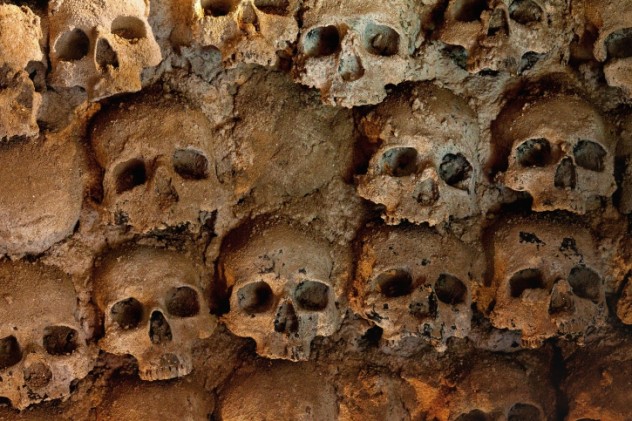 Archaeologists in China found about 80 skulls in the Shimia ruin, the largest ancient city ever found in China. The skulls, all of which were found without the bodies, are believed to be those of young women. The women were used as human sacrifices and their skulls are believed to have been used in building the ancient city’s walls. The skulls were found in pits along the eastern gate of the city while several others were found around the city’s walls. All of them showed signs of violence; they had been hit before being burned. The women had probably been killed in large-scale violence where they had been caught as enemies or prisoners.

Also found were about 100 murals and jade. This is not the first time mass graves dating from ancient China would be found in China. In 2005, archaeologists from Hunan province found an altar that was once used for human sacrifices along with a skeleton. It was also not uncommon for ancient Chinese emperors to be buried along with their slaves or relatives who were either killed first or buried alive. 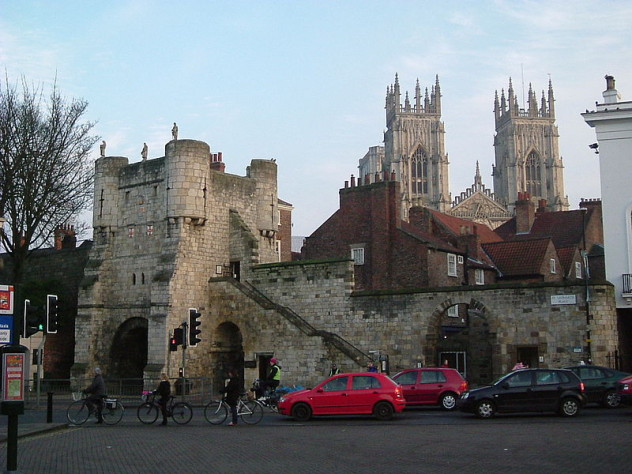 Several mass graves filled with the bodies of 113 men were found just outside the city walls of Yorkshire, England, in 2008.The bodies are believed to be those of soldiers who fought for the parliamentarians during the English Civil War. They had taken part in the 1644 Siege of York where they died of disease—most likely typhus fever which was common, contagious, and had no long-lasting effect on the bones. They were found along the city walls where soldiers of the Oliver Cromwell Parliamentarian Army, under the command of Lord Fairfax, camped during the Siege of York at the height of the English Civil War.

The skeletons were packed in well-arranged rows lying face-down or on their sides. At least 87 of them were confirmed to be male. Most of them were also between the ages of 35–49. Oliver Cromwell’s army would later defeat the Royalists during the Battle of Marston Moor to become the victor of the war.

Elizabeth is an aspiring writer.