For as long as we have been able to, humanity has written down its thoughts and ideas, using the written word to establish a sort of immortality. Many of our early writings are lost, never to be seen or read by anyone. Yet a lucky few have made it this far, and here are 10 of the oldest. 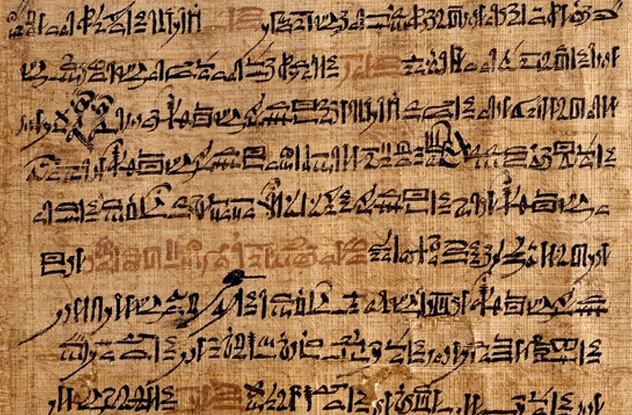 Written during or slightly after the reign of Seti II, ruler of Egypt from 1200–1194 BC, The Tale of Two Brothers is seen by some as the earliest example of a fairy tale. Though the exact date of the discovery of the papyrus is unknown, it was sold to the British Museum in 1857 and subsequently translated from the hieratic writing with which it was composed. The first part of the story follows the brothers Anubis and Bata. Anubis’s wife tries to seduce Bata, who successfully fends her off. She then turns on Bata, feigning an illness and claiming he beat her, after he allegedly tried to seduce her.

Bata flees, for Anubis wants him dead, and he prays to the god Re-Harakhti to save him. After Bata expresses his innocence by severing his own genitals and tossing them into a lake, Anubis goes home and kills his own wife. Eventually, through a convoluted process of putting his heart into a tree and having it cut down by his own wife, Bata dies, and Anubis comes looking for him.

The second part of the story is quite different thematically, transitioning to a story of kingship, as Bata is eventually revived and made king, with Anubis serving as his prince. 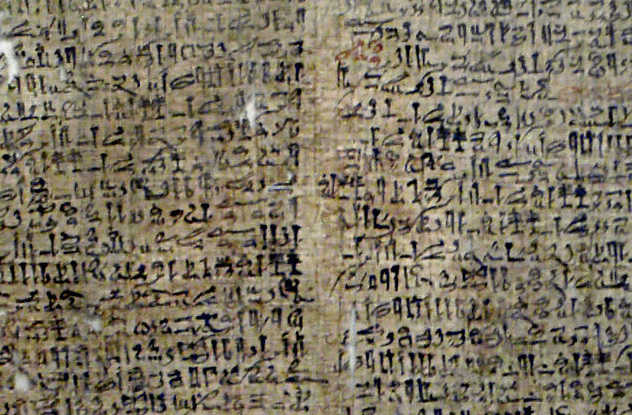 Normally rendered in English as King Cheops and the Magicians, the Westcar Papyrus is a collection of five separate stories, each one detailing an ancient Egyptian priest or magician and the miracles he performed. Allegedly discovered by and named after Henry Westcar, a British adventurer, the papyrus eventually found its way to a German Egyptologist, who translated its hieratic text. Though its origins are mysterious, it remains in the Egyptian Museum in Berlin.

Perhaps the most widely known of the stories is that of Dedi of Dedsnefru. Purported to be 110 years old with a massive appetite, he was also a renowned magician with one especially amazing trick: He could reattach severed heads. Cheops brought him to his kingdom and offered up one of his own servants as a test, but Dedi refused, explaining he couldn’t perform the “wizardry” on humans. He then produced a goose, which he quickly decapitated. The king was pleased and demanded more and more encore performances, culminating in Dedi performing the act on an ox. (Unfortunately, how he managed this is not detailed.) 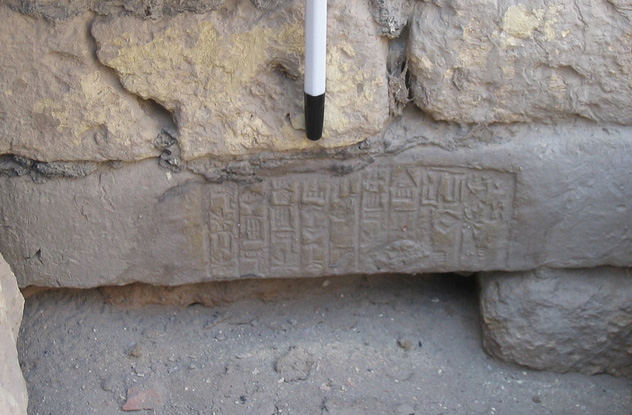 One of the oldest examples of poetic literature in the world, the “Lament for Ur” is a dirge for the destroyed city, written by the earliest kings of the Isin dynasty, who wished to rebuild it. The purpose of the poetry was to calm the angered, anguished soul of the god of Ur, Nanna, a prerequisite for the rebuilding efforts. In addition, the “Lament for Ur” was also used to remove the cloud of suspicion that the kings of the Isin dynasty had anything to do with the city’s destruction.

Nanna’s wife, the goddess Ningal, is the speaker in the first half of the lament, with the voices of the survivors making up the second half. It begins with a list of the various Sumerian cities that had recently been destroyed, seen by the writer as abandonment by the gods. Ningal then goes on to describe the destruction of the city, “with corpses piled high in all streets,” and she talks about how the bricks of the city call for her. The lament ends with the survivors praising Nanna and Ningal. 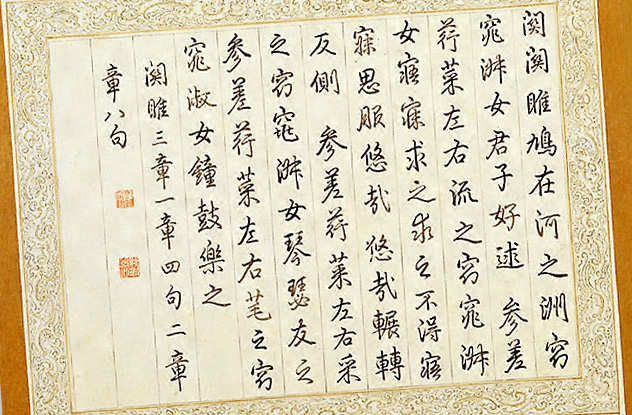 The oldest extant book of poetry in Chinese history, the Classic of Poetry, or Shijing, is traditionally said to have been compiled by the great philosopher Confucius. It is part of a group of five separate books, collectively called the Five Classics. (Most people have probably at least heard of the I Ching, an ancient divination text.) Transmitted orally for centuries, the poems have no attributable author, yet the bulk was most likely created by those living during the rule of the Zhou royal kingdom, a dynasty credited with the foundation of Chinese culture.

Containing over 305 separate poems, the Classic of Poetry is divided into three distinct books: Feng (Songs), Ya (Odes and Epics), and Song (Hymns). Perhaps the most noteworthy section of the book is Feng, the folk songs of the common people, laments about oppression, interspersed with hopeful optimism. 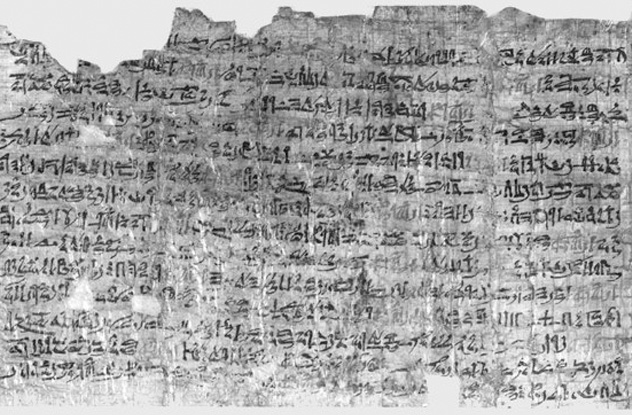 Disregarding the claims of many that this particular piece of literature proves the truthfulness and historicity of the Old Testament, the Ipuwer Papyrus is believed to have been written by the eponymous 17th-century BC Egyptian. Originally called The Admonitions of an Egyptian Sage, the text details the state of the country of Egypt at a time when it was plunging into disarray. Plagues are also said to be ravaging the land, with the Nile itself turning as red as blood, rendering its waters undrinkable.

The source of all this trouble: poor people trying to live above their station. This civil unrest led to the complete overrunning of Egypt by thieves and bandits. Property records were being destroyed throughout the country, causing confusion as to who the proper owners were; it got so bad that people were walking into the Nile, committing suicide by crocodile. Unfortunately, the document’s true origin can’t be nailed down, as the Ipuwer Papyrus is but a copy of an older manuscript. 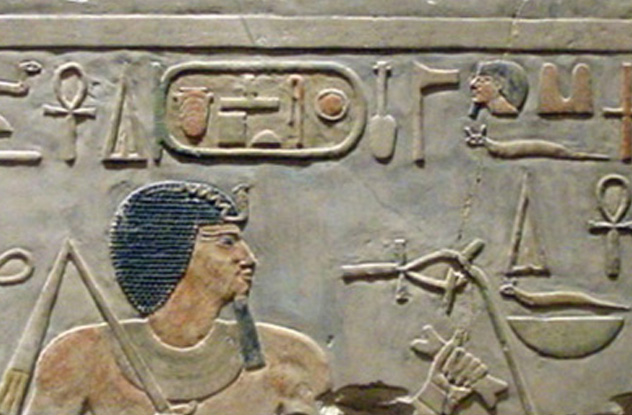 Widely regarded as Ancient Egypt’s greatest literary achievement, The Story of Sinuhe tells of an official of Amenemhet I’s harem. While on a trip to Libya with Prince Sesostris I, a messenger comes to their expedition and informs them of Amenemhet’s assassination and the plot to kill Sesostris himself. Fearful of his own life, for he was known to be an ally of the prince, Sinuhe flees the country, eventually settling in Syria, where he marries into a local chieftain’s family and becomes a respected member of the community.

Years of defending his father-in-law’s homeland from invaders brings Sinuhe much notoriety, and he entertains Egyptian emissaries on several occasions. The emissaries eventually bring word to Sesostris, who is now the Pharaoh, having survived the attempt on his life. Sesostris wishes for Sinuhe, a man whose only crime was cowardice, to return to Egypt and sends word for him. Sinuhe comes back, welcomed with riches and notoriety. 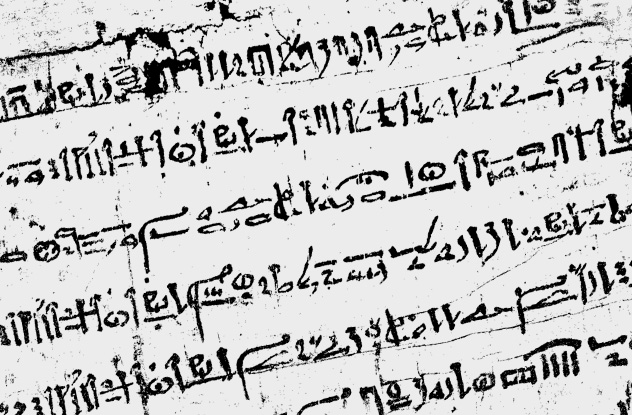 The only existing copy of this late Egyptian novel is located in the Pushkin Museum of Fine Arts in Moscow. Purchased near the end of the 19th century, The Story of Wenamun tells the possibly true tale of Wenamun, a high official of the temple of Amun. Sent on a trade mission to Phoenicia (modern-day Syria), he’s tasked with finding cedarwood to restore the sacred barque with which Amun’s statue was carried during festivals.

An Odyssey of sorts, Wenamun is dispatched for what seems like a run-of-the-mill mission, but it turns into a lengthy and event-filled journey. Eventually landing in Cyprus, he is nearly killed by an angry mob before falling under the protection of a local queen. Unfortunately, the tale ends there, as no other sheets of papyrus have ever been found.

The work is useful for historians, as it is one of only a handful of sources discussing the conditions in Egypt and Phoenicia at the time. 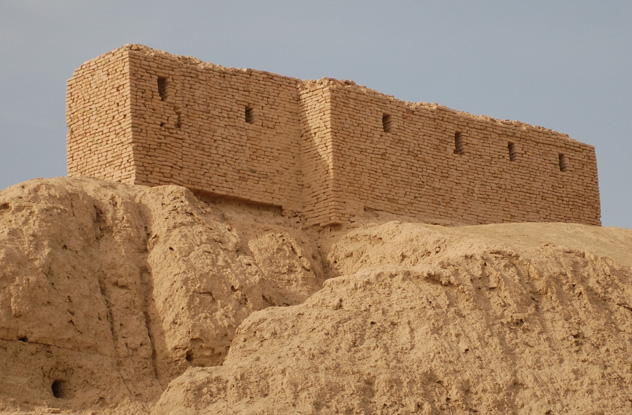 One of the oldest examples of a folk tale, “The Poor Man of Nippur” is a story about Gimil-Ninurta, a man so poor he lacks “even a change of clothing.” He takes his last coin and buys a goat, so as to have a final feast, and he goes to the mayor’s residence to eat there. (Some versions of the story have him bringing the goat just as a gift for the mayor.) Laughing at the poor man and the pitiful goat he brings, the mayor takes the animal and has his servants beat Gimil-Ninurta, throwing him into the street. Vowing his revenge, Gimil promises to repay the mayor threefold.

His first stop is the royal abode of the king of Nippur, whom Gimil-Ninurta somehow convinces to give him fancy clothes and a royal chariot. Heading back to his town, he tricks the mayor into trying to rob him. He then blackmails the mayor (and beats him) for having effectively robbed the king. A priest is Gimil-Ninurta’s next disguise, and he beats the mayor again, taunting him again as well. Lastly, after the mayor has loaded up on guards, Gimil-Ninurta pays a man to run interference, and he sneaks in and beats the mayor a third time. 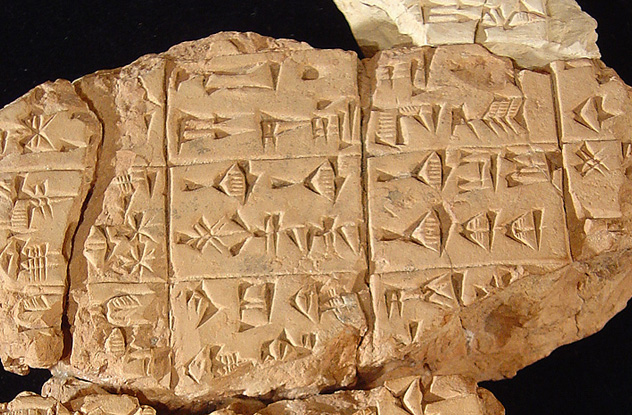 A collection of lessons and sayings, much in the same vein as the biblical Proverbs, “The Instructions of Shuruppak” is a document penned by a father for Ziusudra, the hero of the Sumerian flood myth. Perhaps the greatest example of Sumerian wisdom literature, the document details dozens of helpful tips to ensure Ziusudra would be able to live a good life. Ranging from practical lessons to moral precepts, “The Instructions of Shuruppak” ends with a shout-out to the maiden Nisaba, who was apparently tasked with writing all of it down.

The widespread use of “The Instructions of Shuruppak,” as well as its popularity as a teaching tool, can be assumed thanks to the vast number of existing copies that have been discovered. With advanced lessons like “don’t rape” and “you shouldn’t pass judgment when you drink beer,” it’s no surprise that the work enjoyed as much staying power as it did.

An 18-page book of proverbs, The Maxims of Ptahhotep is a collection of the thoughts and ideas of Ptahhotep, an adviser for two different pharaohs, Menkauhor and Assa Djed-ka-Ra. Turning down the role of pharaoh himself, Ptahhotep dedicated his life to becoming a high priest and serving his role within the kingdom. Much like The Instructions of Shuruppak, these writings were presented as lessons for Ptahhotep’s son.

Beginning with a complaint about getting old, The Maxims of Ptahhotep flows seamlessly between rules about civil obedience and social structure to those regarding personal relationships and sex. Crediting his wisdom and inspiration to a god, Ptahhotep ends his writing discussing his long life (110 years), his pleasure in doing Maat (the ancient Egyptian code of righteousness) for the king, and his desire to see his son continue his legacy of good works.