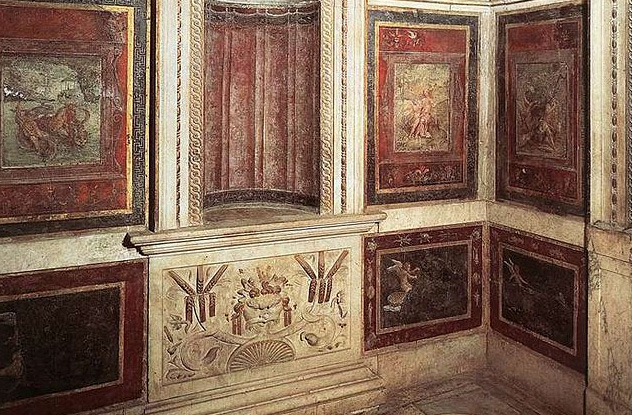 A rumor says the Vatican is stuffed full of ancient pornography, but that’s untrue. That’s not to say, however, that there’s nothing sexual to see—the pope just keeps nearly all of it in his own private bathroom.

Known as the Stufetta del Bibbiena (the “small heated room of Bibbiena”), this private bathroom in the papal apartments was painted by Raphael in 1516 as a favor to a cardinal. The walls are covered in lusty pictures of satyrs panting over nymphs, naked goddesses swimming, and the goat god Pan running around with a gigantic erection. The whole thing was designed so Cardinal Bibbiena could view it at leisure while lying in his bathtub, presumably doing things we really don’t want to think about.

Despite nearly every subsequent owner being embarrassed by Bibbiena’s design choices, the Vatican never destroyed the Stufetta. In the 19th century, a Catholic art expert even restored portions of it, though he left the racier panels, showing attempted rapes, to molder away.

It’s almost impossible to get an inside view these days, but that doesn’t stop people from trying.

9The Testicle-Licking Statues Of Wiltshire, England 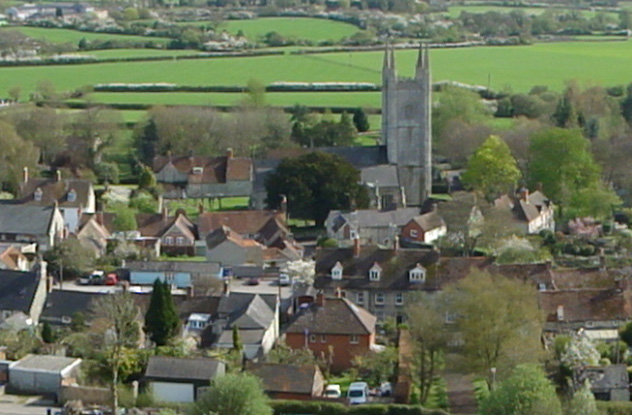 A quaint little village in the heart of the English countryside, Mere isn’t the sort of place where you’d expect to find public pornography. Yet visit the Church of St. Michael, and that’s exactly what you’ll see. Hidden away in a corner of this 11th-century building is a stone carving of a slobbering demon greedily licking its own testicles.

The figure is part of a tradition of exhibitionist male carvings similar to the vulva-exposing Sheela-na-gigs we’ve previously covered. But while Sheela-na-gigs appear in old churches all over the British Isles, the Mere testicle-licker has only two-known companions, both of whom reside in a separate church only 5 kilometers (3 mi) away.

Known as the West Knoyle Anus Shower, the biggest of these depicts a demon simultaneously licking its testicles while stretching open its anus and waving it at the people below. Right beside it is yet another carving, this time of a dog licking its own genitals. Exactly what they mean or why the artist chose to carve them in this one tiny stretch of the English countryside are mysteries sadly lost to time.

What is that? “Provocative” Christmas tree raising eyebrows in Paris

Brno’s sculpture is commonly referred to as the “cock clock” or simply “the dildo,” even though Kamenik insists it was meant to be a bullet. He isn’t the only artist to have to defend their work against such accusations. In Rotterdam, a statue of Santa holding what appears to be a giant butt plug and a condom is so suggestive even the city’s official tourism website calls it “the butt plug gnome.” In the winter of 2014, the city authorities in Paris unveiled an inflatable 25-meter (80 ft) Christmas tree, pictured above. It so resembled a butt plug that it was destroyed by angry locals.

Get out of the town squares and things are even weirder. One gallery in Prague has a statue of a bent-over man in its grounds, with a ladder leading up especially so visitors can stick their heads inside his asshole. 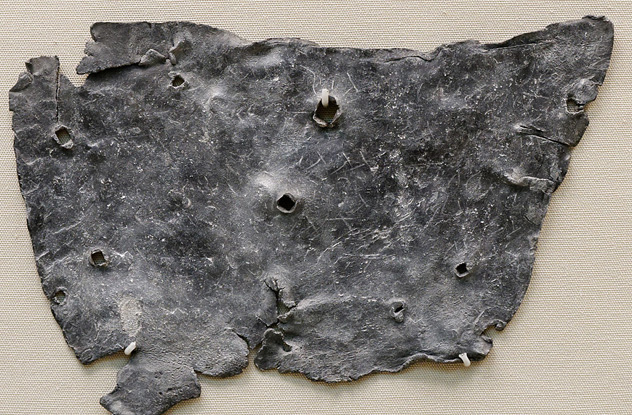 Have you ever had an argument with your bosses and blown off steam by wishing all sorts of nasty stuff would happen to them? Our ancestors went one step further. They’d carve their evil wishes on curse tablets and bury them to make sure they came true. Most of the ones we’ve since dug up are pretty standard. But some take their curses to perverted extremes.

One tablet we’ve found from ancient Egypt curses a woman known as Ptolemais to never have sex again until she falls in love with its author. Specifically, it demands the gods “drag her by her hair, by her guts, until she does not stand aloof from me.” That’s one of the tamer ones. Another one from Egypt calls upon fate to bind a woman named Theodotis to the “mouth of the crocodile, horns of the ram . . . and the appendage of the God.” After shackling her to God’s gigantic penis, it then curses her to spend eternity with her genitals fixed to the author’s, before ending with the words “These are the pictures” (and yes, he includes pictures).

Today, plenty of these curse tablets are available to see in museums across the world. However, unless you understand ancient Greek, Latin, or Egyptian, you’ll probably have no idea how extreme the one you’re looking at is. 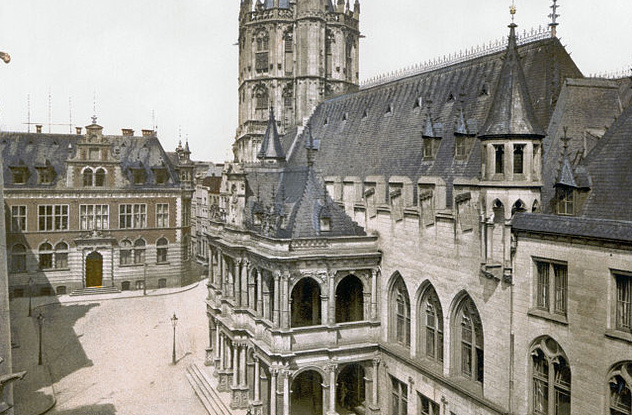 Photo via Library of Congress

As a grand old building in a beautiful German town, Cologne City Hall gets its fair share of visitors. The vast majority even take pictures of the Hall’s crazy old statues. But only a handful of them ever spot its perverted little secret. Hidden under a larger statue of Archbishop Konrad von Hochstaden is a tiny carving showing a man giving oral sex to himself.

Cologne City Hall isn’t really that old. After a fire destroyed most of it in World War II, it was rebuilt, and the statues were carved anew between 1988 and 1995. Somehow, no one thought this might be the perfect time to get rid of the lurid imagery.

5The Dirty Drawings In Medieval Manuscripts 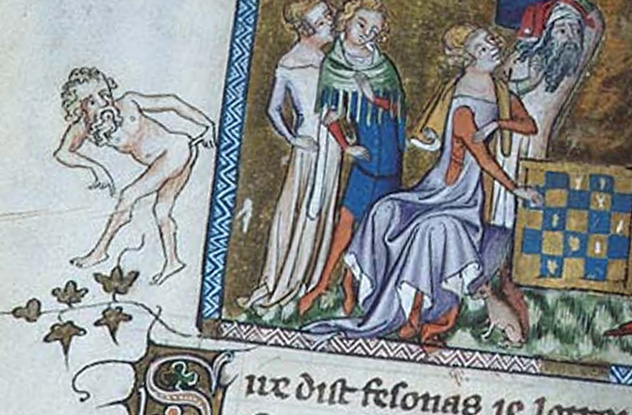 Amassing a library in the medieval period was a real chore. Our ancestors had to copy every single manuscript by hand, and you’d better believe it was boring. A single book could take years to make. To keep themselves from going mad, copyists frequently doodled in the margins. Unsurprisingly for a bunch of celibate monks, their pictures all have one binding theme: sex.

Nearly all of these images occurred in books dedicated to religious teaching, something that’s been fascinating academics for decades. It’s even been said Monty Python’s bizarre animations directly reference these crude, out-of-place doodles. 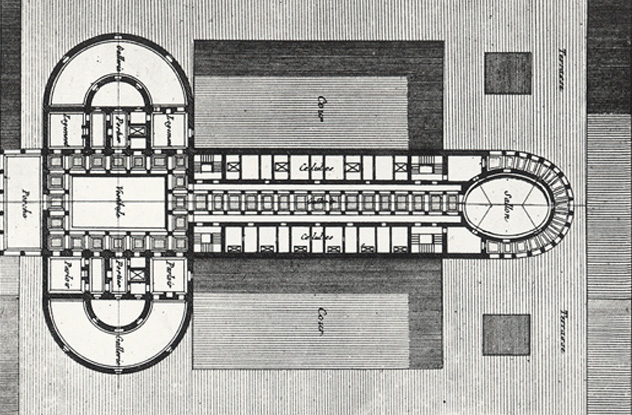 If you’ve got a salacious mind, it’s easy enough to look at any random building and think “penis!” Usually, the comparison is simply down to an unfortunate architectural decision. Just occasionally, though, that’s exactly what the architect had in mind.

In 2013, China commissioned architect Zhou Qi to design a new building for the state-owned paper People’s Daily. When the scaffolding went up, it just happened to look exactly like a gigantic penis. Although the likeness only lasted while work was still ongoing, it was still so perfect that some commentators declared it surely deliberate. While Zhou has always said it was a mistake, he does have a track record of pointing out suggestive shapes in famous Chinese buildings, which makes his denials harder to swallow.

Even if this was a mistake, others have done the same thing deliberately. The 18th-century French architect Claude-Nicolas Ledoux once designed a pleasure house specifically to resemble a “lonely phallus,” with bedrooms pointing outward to symbolize the act of penetration. More recently, Australian authorities encased a local obelisk in a giant pink condom to raise awareness of HIV.

The Manneken Pis, a fountain of a little boy urinating, is one of Brussels’s most popular tourist attractions. It’s far from alone. Across continental Europe, urination and fountains seem to go together with unbelievable regularity.

In Prague, the entrance to the Franz Kafka museum is marked by a statue of two men urinating on the Czech Republic. In Florence, the Bacchus Fountain shows a fat naked man dribbling onto a turtle’s head. Back in Brussels, the Jeanneke Pis features a naked little girl happily making water.

Even stranger is the phenomenon of breast-obsessed fountains, where the water shoots out of women’s nipples. The most famous is probably the Neptune fountain in Bologna, but Nuremburg and Naples have their own versions. There’s even one in Umbria with a name that literally translates as “fountain of the tits.” It’s unclear exactly why this trend came about, but it certainly makes for some eye-catching vacation photos. 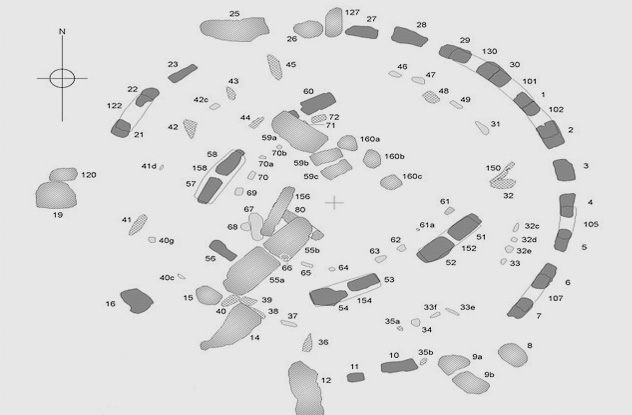 There are many theories as to why Stonehenge was created, and most of them come down to “aliens did it.” Not so for Professor Anthony Perks. Back in 2003, the gynecologist closely examined Stonehenge and declared that it was built to resemble a giant vulva.

Before you just dismiss him as another crackpot, we should mention that Professor Perks got his research published in the respectable Journal for the Royal Society of Medicine. He’s also undeniably an expert on female genitalia and claims England’s most famous monument has a notable level of resemblance. Stones seem to be placed in such a way that they indicate the clitoris, labia, and vagina. Perks published side-by-side comparison pictures of Stonehenge and female genitalia, pointing out the similarities.

Not everyone agrees. At the time of publication, Perks’s theory is derided by most experts on Stonehenge. Still, there’s a chance he might just be right. 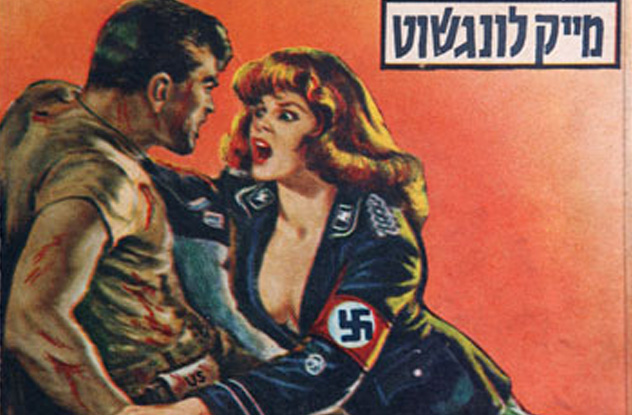 In the early 1960s, Israeli society experienced one of the strangest phenomena of its short existence. For a couple of years, seedy bookstores did a roaring trade in Stalags, a sub-genre of erotica that involved buxom Nazi blondes capturing and raping Allied airmen. After only a couple of years, the state banned the Stalags, and they vanished into oblivion.

Academics claim the Stalags were the first time Israel really tried to confront the enormity of the Holocaust in fiction. The writers were Jewish, wrote in Hebrew, and were tackling a vast silence surrounding the greatest tragedy their European ancestors had ever faced. Although they did it in the pulpiest way imaginable, these nameless artists made it possible for young Israelis to take an interest in their parents’ past. Their books might be pornography, but they’re historically significant pornography.

Top 10 Horrifying Artworks That Will Give You Nightmares