While Australia usually brings to mind red kangaroos, sleepy-faced koalas, surf-lurking sharks, and poisonous snakes, these iconic species actually represent only a fraction of the country’s wildlife. In fact, Australia ranks as one of only 17 megadiverse countries in the world, boasting more non-fish vertebrate animals (including mammals, birds, reptiles, and amphibians) than 95 percent of the world’s countries. 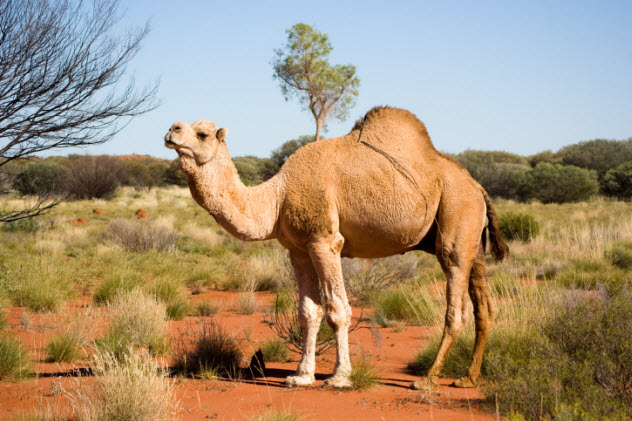 Camels are definitely not native to Australia. Still, Australia is home to more wild camels than any other country in the world, including the countries where camels are indigenous. Today, the population of feral camels in Australia is estimated as high as 1.2 million.

Imported from Afghanistan, Arabia, and India in the 1800s, wild camels were released by the thousands when motorized transport replaced the need for them in the early 20th century. In addition to damaging stock fences and other farm infrastructure, camels are a threat to many of Australia’s native plant and animal species. Their widespread grazing and water consumption can severely degrade natural habitats that are vital to the survival of other species, especially during periods of drought.

Recent efforts to manage Australia’s feral camel population have centered on culling their populations across the outback. Between 2009 and 2013, cooperation between pastoralists, government representatives, and Aboriginal landholders reduced the population by an estimated 160,000 camels. A more recent study found that the use of “Judas camels“—camels tagged and tracked to lead shooters to feral herds—can be applied to ongoing management efforts. This approach was previously used to reduce invasive goat populations on the Galapagos Islands. 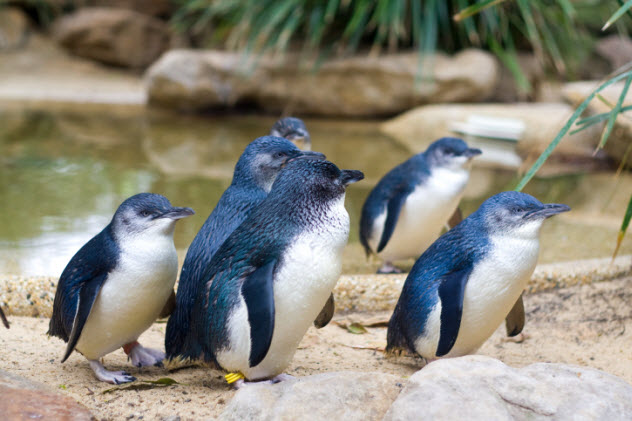 While penguins are often associated with colder climates than we typically picture in Australia, the country’s southern coasts between Perth and Sydney are actually home to the smallest penguin species in the world. Found only in southern Australia and New Zealand, the little penguin stands just 33 centimeters (13 in) tall and weighs only 1 kilogram (2.2 lb). Also known as fairy penguins, these little guys eat their body weight in fish, squid, and krill every day to compensate for the energy they expend swimming.

Although fairly common around Australia’s southern waters and offshore islands, populations of mainland little penguins have experienced severe declines during recent decades. On land, house cats and dogs that roam recreational beaches often prey on little penguins. At sea, the main threats to these penguins come from overfishing, gill nets, and oil spills.

Still, several large mainland colonies remain active. Two of the most interesting places to see little penguins are at Sydney Harbour’s Manly colony in New South Wales and at the St. Kilda Pier in Melbourne, both on the urban outskirts of Australia’s biggest cities. 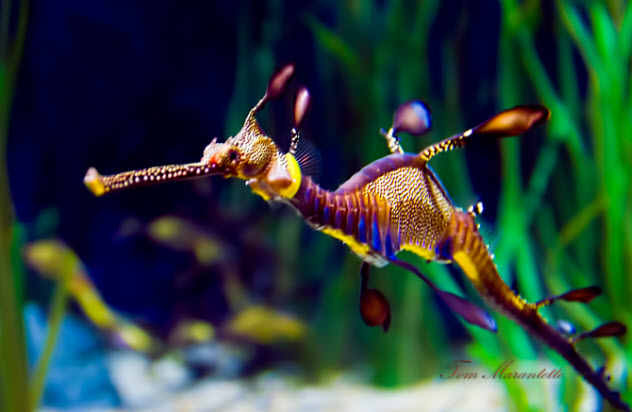 While not nearly as ferocious as their name suggests, Australia’s weedy sea dragons are still impressive. Their name comes from their leafy appendages, camouflage that allows sea dragons to blend in seamlessly with the environment. To further conceal themselves, sea dragons swim in a swaying motion that resembles the movement of surrounding seaweed.

Although related to sea horses, sea dragons have several distinct differences. While the males of both species take responsibility for childbearing, sea dragons carry their eggs in a spongy patch under their tails rather than a pouch like sea horses. Another difference is that sea dragons are unable to use their tails for gripping objects. Found mostly in the waters of southern Australia, sea dragons live in the shallow depths between 3 meters (10 ft) and 50 meters (165 ft), making them especially popular with divers. 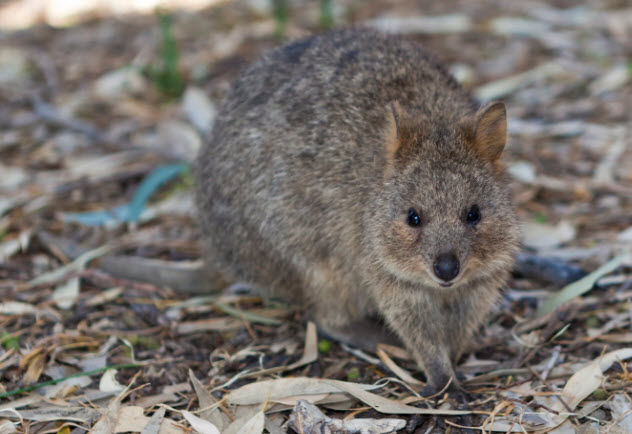 You may have seen these ridiculously cute marsupials when they caught some viral fame for their selfie photobombs in late 2014. One of the smallest species of wallaby, quokkas are a vulnerable species whose mainland populations have been decimated by predators such as dingoes and foxes as well as by habitat loss from human development.

Today, quokkas are primarily found in protected offshore areas like Rottnest Island and Bald Island. Although quokkas often approach humans with curiosity and appear to be friendly with their adorable smiles (check out the selfies here), these animals shouldn’t be touched or fed. In fact, they are considered particularly susceptible to getting sick from eating “human” foods outside of their regular diets.

Unlike many marsupials, quokkas are able to climb trees. Also, the reserves of fat stored in their tails enable these animals to survive for long periods without water. As herbivores, they also distinguish themselves from other species by browsing for food rather than simply grazing. 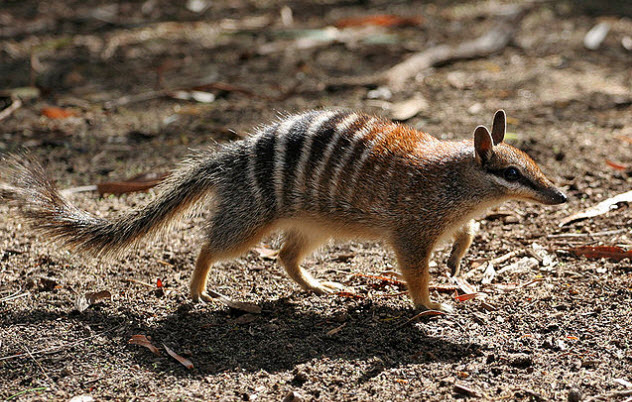 Looking like a cross between a chipmunk, squirrel, and anteater, numbats are as cute as quokkas, even if not as popular on social media. Also known as “banded anteaters,” numbats are found only in Australia. Unlike the giant anteaters of South America, however, numbats are actually marsupials. They are especially unusual because they are one of only two Australian marsupials that are exclusively active during the day. Unlike most marsupials, however, female numbats lack a true pouch.

The numbat is an endangered species. Its population has been substantially reduced by predator cats and foxes as well as habitat loss from agricultural activity and bushfires. Today, only about 1,000 numbats remain in the wild. As part of the effort to protect the numbat and raise awareness of its plight, the government has made the animal the official mammal emblem of Western Australia. 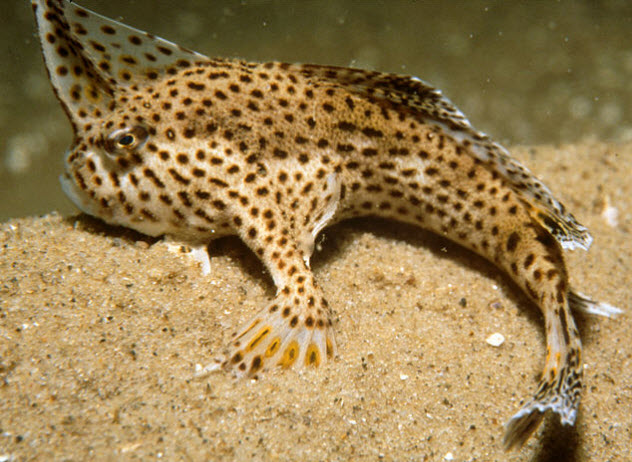 Besides their unusual appearance, Australia’s spotted handfish are known for using their fins to walk rather than swim. They prefer to live in rocky or sandy seafloor environments, where they use their handlike fins to walk along the bottom of the sea in search of small crustaceans and worms to eat.

Although they can use their unique pectoral fins to swim when necessary, spotted handfish seem to use walking as their primary way of getting around. Their distinct appearance extends to their typically vibrant coloring, usually fiery red with blue and white fin markings or pinkish-cream with red, orange, and brown patches.

Unfortunately, spotted handfish are also a threatened species. The reasons for their decline aren’t well-known, but some theories include the predation of their eggs, heavy metal contamination, and loss of habitat from land clearing that pollutes their water with silt.

At most, their population in the wild is currently 1,000, although many people believe that spotted handfish number only in the hundreds. Their best hope for survival hinges on improving the water quality of Derwent River estuary where their population is concentrated and reducing the number of invasive species, especially sea stars and crabs, that prey on the eggs of spotted handfish. 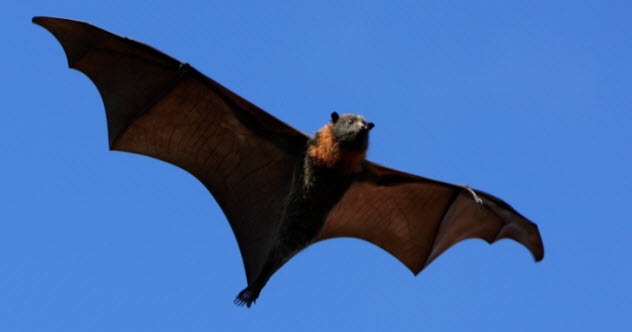 While its name might recall a sugar glider, a flying fox is actually the largest bat known to man, with a wingspan that can be greater than 1 meter (3 ft). Australia is home to four main species of flying fox, including the little red, the black, the grey-headed, and the spectacled flying fox.

Of the four, both the grey-headed and the spectacled varieties are considered vulnerable species. Like many threatened species, the greatest danger to their survival comes from humans destroying the flying foxes’ habitat. They are also threatened by their reliance on pollen and nectar from eucalypts, which flower irregularly from year to year.

Flying foxes are a “keystone species,” meaning that the roles they play are vital to the health of the ecosystems they inhabit. In feeding on nectar and pollen from eucalypts, they help to pollinate flowers and disperse seeds. Their survival is especially important to maintaining threatened environments, including the Wet Tropics and Gondwana Rainforests.

Named for the distinctive, hoe-shaped extensions of their snouts, elephant sharks are truly odd-looking fish. Inhabitants of the southern waters between Australia and New Zealand, elephant sharks can grow up to 1.5 meters (5 ft) long. As deepwater dwellers that live at depths of at least 200 meters (650 ft), elephant sharks use their noses like metal detectors to find shellfish on the soft, muddy ocean floor.

Also called “elephant fish,” they are more closely related to the ray family than to sharks. Their front dorsal fins have long, serrated spines believed to be poisonous, a means of protecting themselves from sharks and other larger fish.

Scientists believe that elephant sharks may be the slowest-evolving animals of all known vertebrates, with little change since they originally evolved hundreds of millions of years ago. Like all other sharks and rays, elephant sharks have skeletons made of cartilage rather than bone, a trait uncommon in more recently evolved vertebrates.

Elephant sharks also appear to have a simple, little-evolved immune system with just one type of immune helper cell. Like living fossils, elephant sharks offer a link to Earth’s distant past and the animals that once inhabited our ancient oceans. 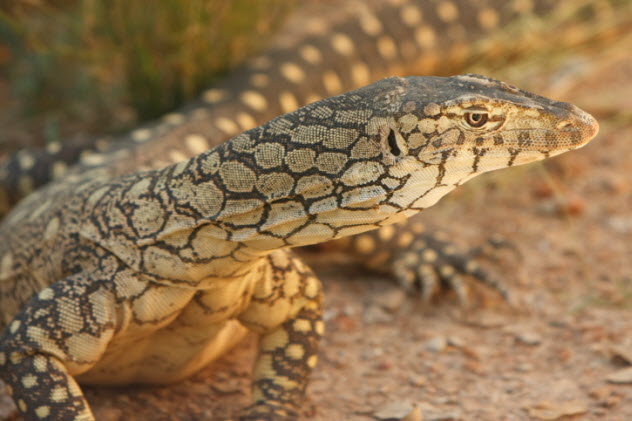 Perenties are Australia’s largest lizards, reaching lengths of over 2.5 meters (8 ft). These monitor lizards are also extremely fast, with speeds of up to 40 kilometers per hour (25 mph). Although they normally run with all four legs, they sometimes use just their two hind legs.

While their size and running ability make perenties formidable predators for rabbits, birds, small marsupials, and even large poisonous snakes, they aren’t at the top of the food chain. Besides being preyed upon by large eagles, perenties are also a traditional source of meat for Aboriginal people.

However, perenties are in no way endangered. They thrive in deserts throughout Australia, and they even help to reduce the populations of invasive species like rabbits. 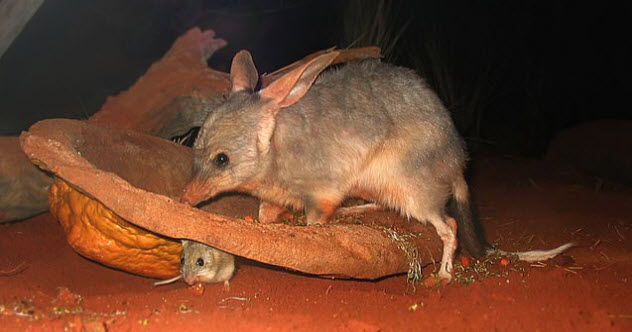 The largest members of a ground-dwelling family of marsupials called “bandicoots,” greater bilbies are the only survivors of the six species of bandicoots that once lived in the arid and semiarid regions of Australia. With their former habitats reduced by 80 percent, these nocturnal bilbies are classified as “vulnerable” nationally and as “endangered” in Queensland.

A century ago, bilbies experienced a steep decline in their population when human interventions in agriculture substantially changed and reduced their habitats. The most significant threat to these animals comes from domestic cattle, sheep, and rabbits, all of which depend on the same food as bilbies. Rabbits also compete with bilbies for ground in which to burrow. Bilbies are known for their impressive burrowing habits, using their strong forearms and claws to create spiraling tunnels up to 3 meters (10 ft) long and 2 meters (7 ft) deep.

While their long, rabbitlike ears have made them something of an Easter icon in Australia, bilbies are even more important to Aboriginal culture. They figure significantly in creation stories from the “Dreaming,” which link the past and the present as well as the Aboriginal people and the land. For some tribes, bilbies represent a totem, a symbol from nature that forms part of the community’s identity. The actions of European immigrants, rather than the Aboriginal people, are responsible for the dwindling number of bilbies.