Although getting it on with your wife’s best friend might land you a spot on The Jerry Springer Show, it probably won’t send shock waves across the world’s press. But in the 19th century, divorce was much less common, and adultery could ruin all of a person’s future prospects. Back then, marriage scandals rocked the courtroom and shocked society. 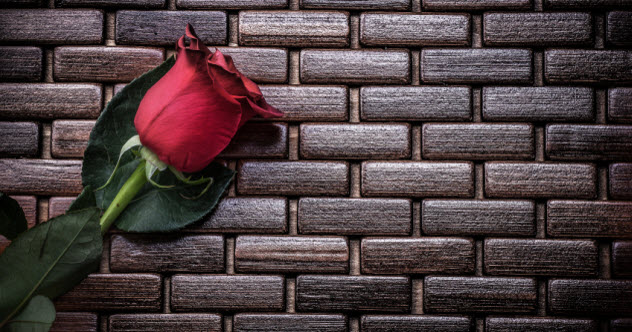 In November 1860, lawyer Richard Busteed presented his client’s divorce case to the Brooklyn Supreme Court. Alfred Beardsley claimed that his wife, Mary Elizabeth, had taken a ferry into Manhattan in 1854, where she met an Irish doctor named Francis Mahan in a saloon. As she left, she dropped a rosebud on the floor, encouraging the doctor to follow her.

When he caught up with Mary at P.T. Barnum’s Museum in New York, she introduced herself to him as Emma Evaline Seymour, an heiress from Nova Scotia. As she shielded her true identity, the pair fell in love.

In 1855, Mary committed bigamy by marrying the doctor under her false name. He didn’t discover that she was the wife of another man until a few months into their marriage. Mary’s scandalous act left her husband’s lawyer labeling her as “the harlot of the 19th century.” 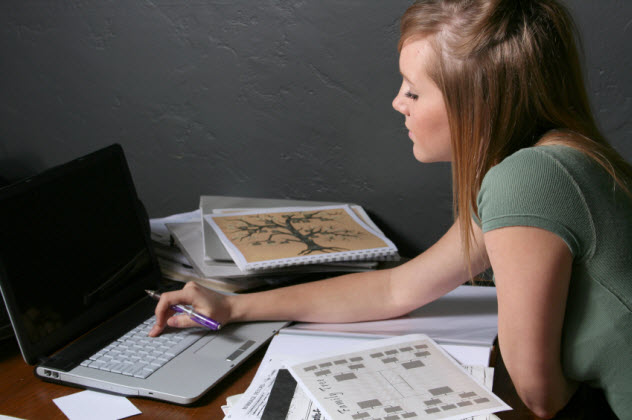 With plenty of genealogy websites at our fingertips, it’s easier than ever to peek at what our ancestors were doing back in the day. Sometimes, we discover unexpected secrets, which is exactly what happened to Tricia Power when she researched her family tree.

While looking at documents on Ancestry.co.uk, she discovered that her great-great-grandmother Laura Hadder had been cheating on her husband, George, with his colleague. The affair was only revealed when the married couple’s teenage daughter, Winifred, discovered the cheaters together in the family home.

When the divorce case broke in 1898, the scandal ended up in the news, with the pair’s love letters published in the tabloids. George won his case and was able to divorce his wife, who went on to marry her lover. Winifred stayed with her father, unable to forgive her mother’s affair.

8 Ellen Miller-Mundy And The Earl Of Shrewsbury 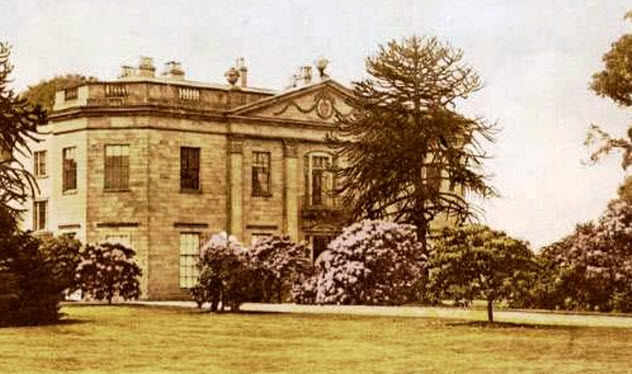 Charles Chetwynd-Talbot, 20th Earl of Shrewsbury, was born in Eton Place, London, and had high prospects in life. Then he eloped to Paris in April 1880 with an older, married woman.

Ellen Miller-Mundy had been married to her husband, Alfred Edward Miller-Mundy, for seven years before she fell in love with the 20-year-old earl. Determined to be together, the pair searched for a way to escape. Their chance came when Ellen’s brothers drew lots to see who would kill off their elder brother if he refused to sign over inheritances. Wanted by the police, they fled abroad, taking their sister and the earl with them.

Divorced by Alfred, Ellen married the Earl of Shrewsbury two years later. With the newspapers discussing their scandal, however, she and her new husband were shunned from society.

Kate Summerscale: How Isabella Robinson’s private diary was used to bring about her own disgrace

Henry and Isabella Robinson were married in 1844 and lived a seemingly happy life together. Then Isabella fell ill in 1857 and said some things in a delirious state that caused her husband to read her private diary. He discovered a scandalous affair between Isabella and a family friend, Dr. Edward Lane, a highly regarded gentleman in society whose friendship circle included Charles Darwin.

The diary, which consisted of several volumes covering the years 1850–55, became public knowledge as it was read aloud in court. Transcribed by the newspapers, it thrust the Robinson divorce case into the spotlight.

Without direct confirmation in the diary of any sexual consummation, the case was dismissed due to lack of evidence that adultery had taken place. The marriage between Henry and Isabella officially ended in 1864 when she was caught in an affair with the former tutor of her children. Though Isabella’s original diary no longer exists, the story of her disgrace was told in a book by author Kate Summerscale in 2012. 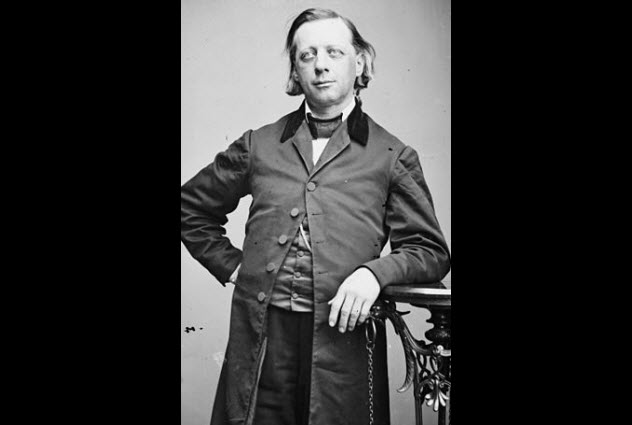 Born in Connecticut in 1813, clergyman Henry Ward Beecher became a respected leader in the women’s suffrage movement. But in the 1870s, he found himself at the center of a national scandal after Elizabeth Tilton, the wife of his friend and assistant Theodore Tilton, confessed to having an affair with him.

When Theodore confided in writer and activist Elizabeth Cady Stanton about his wife’s affair, the gossip made its way to women’s rights leader Victoria Woodhull. As Henry had previously discredited Victoria’s advocacy of free love, she decided to publish his scandalous story in her magazine in November 1872. Theodore filed charges of adultery against Henry in 1874, which resulted in several hearings and a trial that lasted for six months.

Even though Theodore had a written confession from Elizabeth, she wished to stand by Henry in denying the charges. But the law prevented women from testifying against their husbands. The jury failed to reach a verdict, and it was never revealed whether the pair actually had sexual relations. 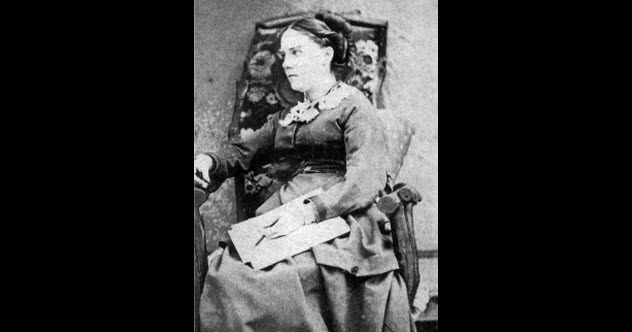 William Charles Yelverton was an Irish Protestant in 1852 when he met and fell in love with Theresa Longworth, an English Catholic. When the pair decided to marry, Theresa wanted a public, Catholic wedding. But Charles knew that a Catholic wedding in Ireland would be invalid under the law because he was Protestant.

Instead, he convinced her that they should wed in secret as he had promised his family that he would not marry. The pair were eventually “married” by a Catholic priest in 1857. But in the eyes of the law, Theresa was nothing more than a mistress.

A year later, Charles met another woman, Emily Forbes, and demanded that Theresa relocate to New Zealand so that he could be with his new lover. Refusing to renounce her status as his wife, Theresa took the case to court while Charles married Emily.

In 1864, the case reached the House of Lords, and Charles was found innocent of bigamy because his first marriage was invalid. However, the case led to a change in the law for mixed religion marriages in Ireland under the Marriage Causes and Marriage Law Amendment Act of 1870. 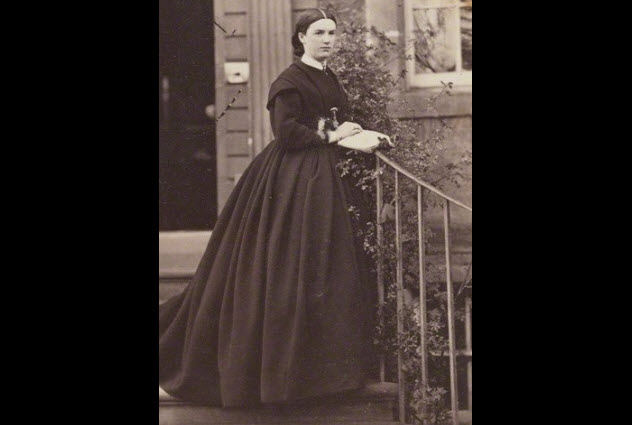 Although she usually accompanied him, Lady Harriet encouraged her husband to take his annual fishing trip alone in 1868. Upon returning home, Sir Charles discovered from a maid that his wife had been visited by Lord Lowry Cole and that the two of them had spent much time alone together.

When Lady Harriet gave birth to a daughter who was feared blind by doctors, she believed it to be caused by a sexually transmitted disease and confessed to adultery with several men other than Lord Cole, including the prince of Wales.

Sir Charles filed for divorce in 1869. Lady Harriet’s family, fearing loss of the money gained from the marriage, attempted to stop the proceedings by branding her insane. Lord Cole claimed paternity of the daughter, and Sir Charles was granted his divorce. While at first it was thought that Lady Harriet had faked her insanity, she ended up living out the rest of her days in a lunatic asylum. 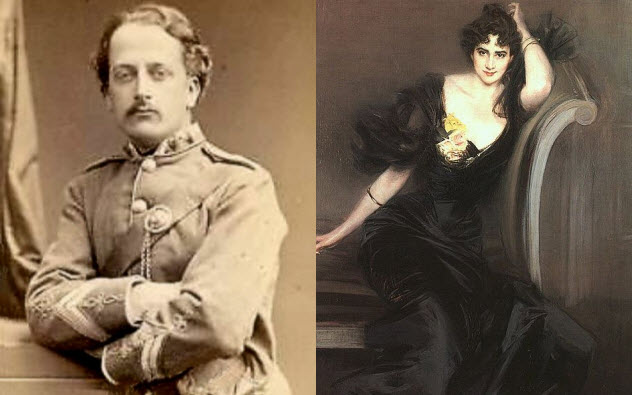 In 1881, Lord Colin Campbell met Gertrude Blood on a holiday in Scotland. Three days later, he proposed marriage. But their whirlwind romance was doomed after Lord Colin infected his new wife with syphilis.

Before their wedding, he had told Gertrude that they would have to sleep in separate bedrooms because he had an infection, although he did not disclose details. But eventually, the couple consummated their marriage after Lord Colin gave Gertrude a supposed excerpt from a doctor’s letter that said a little fun in the bedroom would be beneficial for him.

Gertrude sued her husband and later filed for divorce on the grounds of cruelty. He responded by claiming that she’d been unfaithful with several other men. The press split on whose side to take. Although the judge denied both divorce petitions, Gertrude was freed from her marriage when Lord Colin eventually died of the infection in 1895. 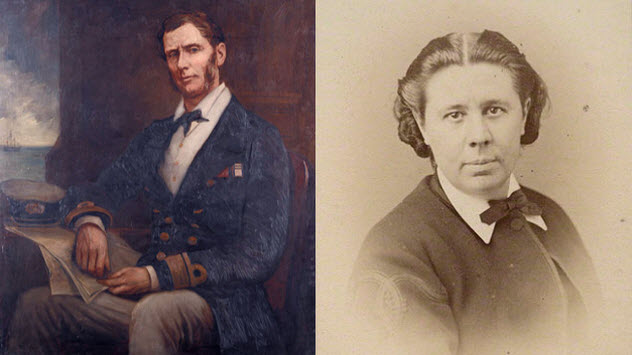 Royal Navy officer Henry Codrington married Helen Jane Webb in April 1849, and they lived a happy life together until Henry answered the call of duty in 1854. When the admiral was sent to work in Crimea, his wife had to stay alone in the country. So the couple made arrangements for Helen to have a female companion while Henry was away.

That companion was Miss Emily Faithfull, a feminist campaigner from Surrey, England. Upon his return to his wife, Henry noticed a dramatic shift in their relationship. Emily continued to live at the house, even though her services were no longer required. Helen had even begun sharing a bed with her friend on occasion, stating that Emily was subject to asthma attacks.

By spring 1857, Helen refused to share a bed with her husband and continued to sleep with Emily, leading Emily to be dismissed from the house. Henry sued for divorce in 1863, accusing his wife of having various affairs. During an investigation into the matter, Helen claimed that her husband had climbed into bed with the two women and attempted to force himself upon Emily. The court dismissed the claims and granted Henry his divorce.

Parnell and the Englishwoman (Episode 1 – The Meeting)

Born in Essex, England, in 1845, Katharine Wood was the granddaughter of a former Lord Mayor of London. Due to her brother’s position as an officer in the British army, the family home was regularly visited by soldiers. This is how Katharine met Captain William O’Shea.

The pair were married in 1867 and had three children together. But when financial problems arose, the couple grew apart. William began spending more time away from home, and rumors of his infidelity started to fly, even once involving Katharine’s sister.

William then turned his career to politics. While running as a parliamentary candidate, he needed his wife by his side for the sake of appearances. During the campaign, Katherine met political leader Charles Stewart Parnell, and they quickly fell in love. William knew about their relationship and even challenged Parnell to a duel, although William had originally encouraged their friendship for his own political gain.

Eventually, Katharine married Parnell, but the scandal left his political career in ruins. Most of his party deserted him. His enemies gave Katharine the nickname “Kitty,” which was slang for “prostitute,” to further damage his reputation. He died four months after their marriage.

Katie can usually be found in her local library, checking out far more books than she can carry.