In an act that seems savage, cold, and downright heartless, helpless young are occasionally killed and even eaten by the very animals that either brought them into the world or helped to nurture them from a very young age. In the eyes of mankind, infanticide is undoubtedly heartbreaking.

But for an animal that lacks resources, seeks total dominance, sees the offspring unfit to survive, or simply feels threatened, killing and eating its young is often necessary. 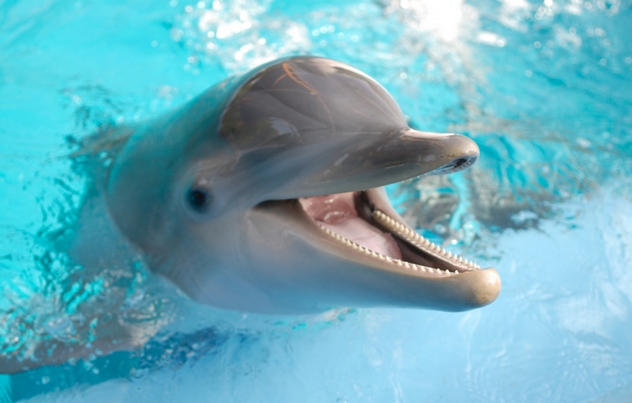 Dolphins are one of the more beloved mammals in the ocean. Often described as intelligent, dolphins are advanced in hearing, communication, and vision. Because of the permanently plastered “smile” that dolphins exhibit, it is easy to assume that these animals are harmless. In a rare case of brutality, however, a group of bottlenose dolphins were observed attempting to kill a newborn pup in August 2013.

History was made when researchers captured the live birth of the bottlenose dolphin in the wild near the coast of Georgia. Startlingly, not more than two minutes after the pup entered the world, two male dolphins began trying to sink the baby and continued to do so for 30 minutes. This shocking behavior by bottlenose dolphins has only ever been observed twice. Even more distressing is the possibility of the pup having been attacked underwater, as evidenced by the violent thrashing which was too far for the researchers to see clearly. Scientists are now realizing that because the dolphins also attack the pups underwater, far more assaults and even deaths may occur than was previously believed.

Some theories attempting to explain this harsh behavior include territorial clashes, food disputes, and attempts to force mating with the female once the calf is dead. 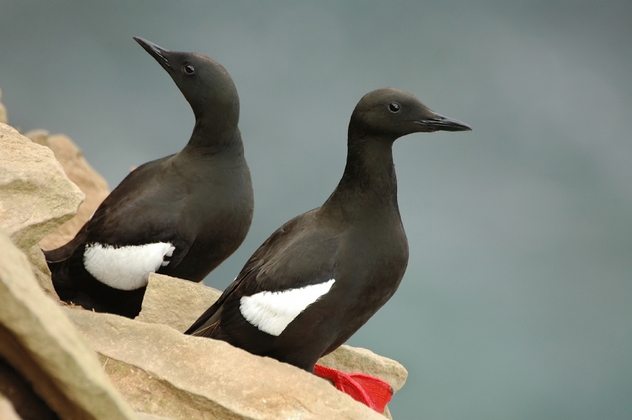 Native to the northern seas of the world, the black-and-white guillemot is a relatively small seabird that usually restricts its nesting to rocky shores. The bird, although docile in appearance, has no issue with attacking and killing chicks of its own kind. According to the University of Leeds and the Centre for Ecology and Hydrology, there seems to have been an increase in the instances of infanticide among guillemot colonies. After studying a colony in Scotland in 2007, it was revealed that chicks were either being pecked to death or simply thrown from the cliffs.

What’s interesting is that about two-thirds of the deaths were caused by adults that did not parent the dead young. Researchers have pegged lack of food resources, even in established colonies, as one possible reason for the murders. Global warming is most likely the culprit behind the lack of prey available to the seabirds. Because both parents are forced to forage for food, leaving the chicks unattended allows for neighboring guillemots to attack and kill them. 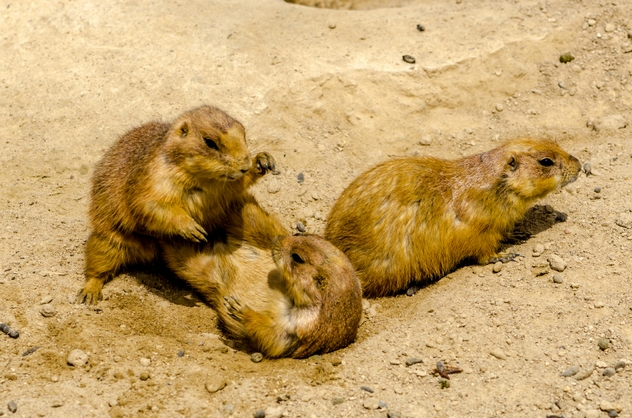 Prairie dogs are the busy-bodied rodents of the prairie lands, ranging from Texas all the way up to Canada. The most common species, the black-tailed prairie dog, is prey for a plethora of hunters including badgers, coyotes, mountain lions, and even long-tailed weasels. The infant mortality rate is very high among the black-tailed prairie dogs, and it’s not due to predation; the leading cause of death is infanticide.

In fact, an astonishing 39 percent of all prairie dog litters will lose pups to infanticide. In some cases, the entire litter can be wiped out. The usual culprits are female prairie dogs, who attack the offspring of close relatives but not their own children. The females are typically lactating when they commit infanticide, leading to speculation that they turn to cannibalism for nutritional purposes during the stressful period of feeding their own young.

Male prairie dogs have also been known to commit infanticide. Oddly, they often attack the pups of females they have previously mated with. Since female prairie dogs can give birth to a litter of pups with more than one father, scientists have suggested that the males might somehow be able to tell which pups are theirs. An overprotective father might then try to improve the chances of his own pups by killing the other members of the litter. 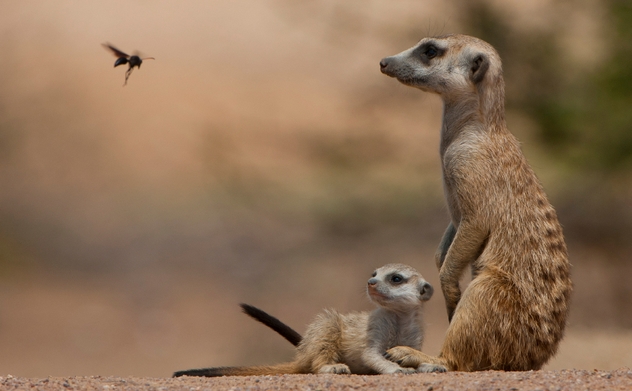 If there is one animal that knows that there is power in numbers, it is the meerkat. Native to the southern plains of Africa, the very sociable and organized meerkats (also called suricates) form communities that work together in all aspects to survive. While the group goes about its day-to-day business, there are usually lookouts that signal to the rest of the community when trouble is afoot. What may come as a shock, however, is that despite an immense sense of community, the meerkat females are actually tyrants.

In the meerkat hierarchy, the alpha male and female rule with an iron fist. If inferior females give birth to young, the alpha females viciously eliminate them. Having no remorse whatsoever, the alpha females then force the grieving mothers to decide to either stay and become wet nurses for the alpha’s young or live in exile. Choosing to stay has its price though, as wet nurses lose a significant amount of weight.

Scientists believe that alpha females who kill the young of other mothers are attempting to reduce competition for the care of their own young. Although the alpha’s methods are extreme, they are certainly effective. 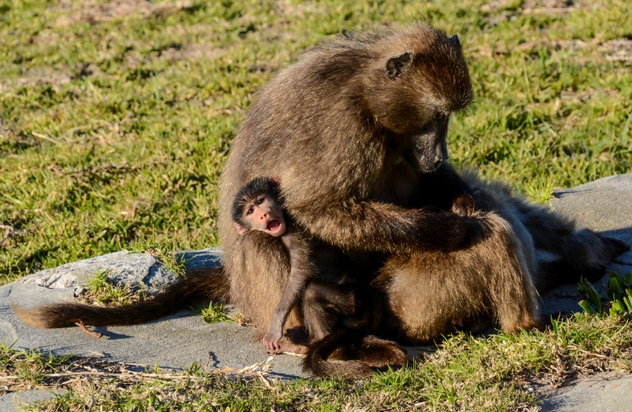 Chacma baboons have one of the more complicated social structures in the world of primates. The monkeys, which can be found in the Zambezi region of southern Africa, are organized into troops and are ruled by a hierarchy where friendships and bonds are critical.

Although familial and relationship ties are encouraged within the chacma community, alpha males occasionally take it upon themselves to murder offspring of a female that do not belong to them, because they want to father their own with that particular female. By killing the baby and halting the lactation of the female, the male makes the female sexually available once again.

Scientists have observed that in an attempt to thwart attacks on their young, mothers understandably forge nonsexual friendships with other males in the group, often grooming and keeping in close proximity to them in exchange for protection. Furthermore, the male can find himself on the inside of a troop after having formed a bond with a female. Whoever said males and females can’t be friends was seriously mistaken. 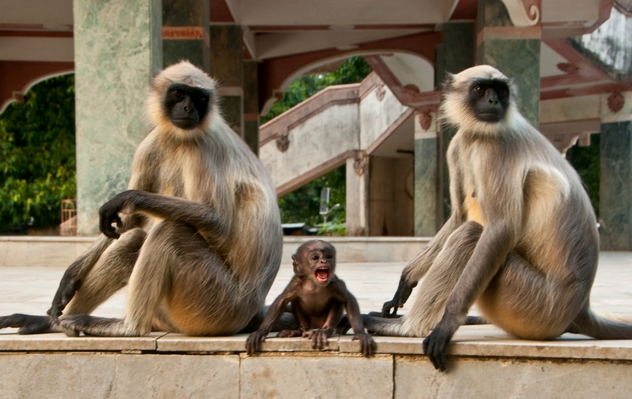 The usefulness of the South Asian Hanuman langur is twofold. Firstly, the primates are used as a form of “pest” control and can be trained to keep unwanted rhesus monkeys at bay, as was seen at the Commonwealth Games held in New Delhi in 2010. Gray langurs, as they are sometimes called, are also widely respected by Hindus and are seen as a representation of the monkey deity Hanuman, who is considered a hero in Sanskrit legend. It may come as a surprise, then, that the “holy” gray langurs are not as peaceful as they appear to be.

In the wild, one dominant male is in charge of a troop where the females are fiercely defended by him. If a challenger tries to topple the alpha’s regime and succeeds, the new alpha usually decides to kill any preexisting infants to make way for his own. Research is suggesting that because the alphas are the only males in their troops, they are committing infanticide in an attempt to further the succession of their lineage. 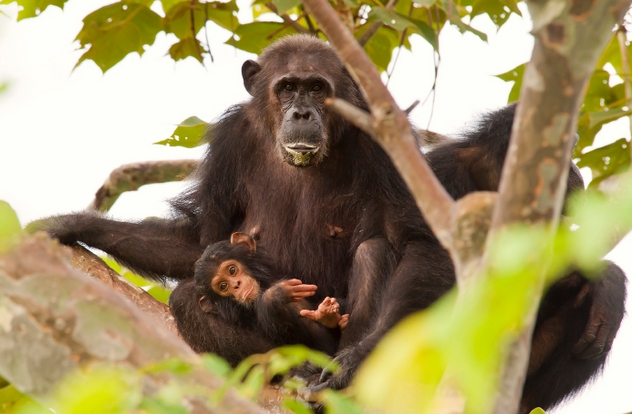 Some of the more disturbing reports of infanticide among primates originate from chimpanzees in the wild. Chimpanzees live in communities where males are the dominant sex. In some cases, gangs of males from one group strike out at an opposing group of males in another community with fierce aggression, resulting in the deaths of infants left unprotected. What’s even more alarming is that the mothers of the dead infants sometimes associate with and even join the communities of the perpetrators.

Infanticide is certainly not limited to outside influence; males and females kill infants within their own communities. In some observed incidents, males in cooperation with females had either killed and eaten infants or totally abandoned them. As for why females are increasingly killing babies, scientists are still investigating. 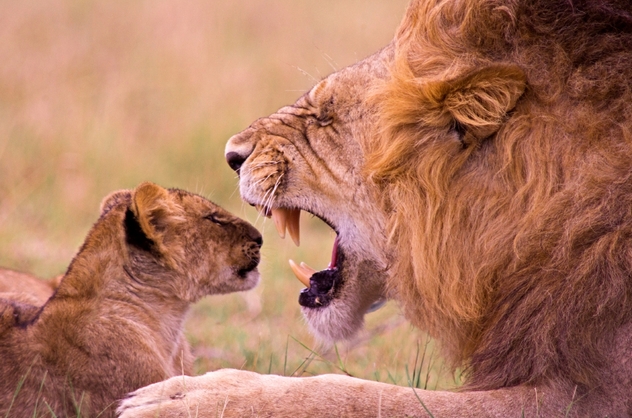 Even though they are the only cats that live in groups, African lions are dubbed “the kings of the jungle,” and rightly so. They are powerful, majestic, and are becoming ever more endangered as lion populations across the board are declining. It is projected that their numbers will be down by 50 percent in approximately 20 years. Lions battle with loss of prey and habitat, humans who vengefully slay them for killing livestock, and—unfortunately—their own kind.

Lionesses are known for being the hunters in a pride. But when an opposing rogue male makes his move, it is the cubs that become the hunted. Similarly to many other mammalian groups, when an alpha male is challenged and loses to an outsider, the new male will almost always kill the cubs of the ousted alpha. Lions do this so as not to waste energy and time on cubs that are not their kin. Once the cubs are dead, the males can mate with the females because the females stop nursing. 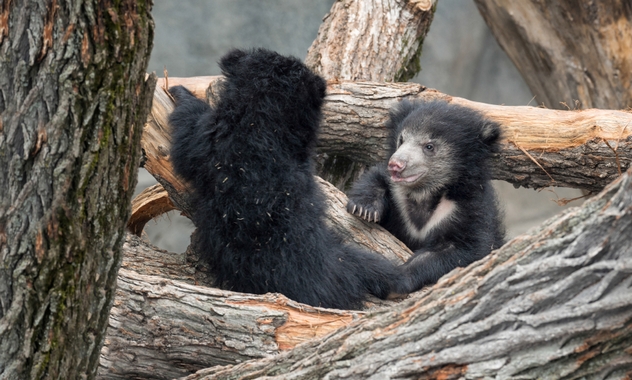 Bears, regardless of the species, are large and in charge. They are solitary, powerful, and immensely protective of their young. It might be difficult to envision a mother bear harming or even killing her own young, but it does happen.

Take the normally withdrawn sloth bear, for example. In an alarming and upsetting incident that took place at the Smithsonian’s National Zoo in Washington, DC, a female sloth bear was in the process of birthing her cubs. Not long after the first cub was born, the mother ate the infant while she was still in labor. She went on to birth the other two cubs and lived normally with them for a week.

Still recovering from the shock of the infanticide, zookeepers were astonished when the mother sloth bear ate yet another one of her cubs and completely abandoned the third. After rescuing the third cub from the negligent mother, it was discovered that the cub was ill, and it was later determined that the ill-fated infants were also sick.

As gruesome and heart-wrenching as these acts are for human beings to witness, mother bears (and even males) in the wild typically slaughter young that are unfit or deformed. Is it possible that the mothers are doing the infants a favor and saving them from short lives of misery and illness? 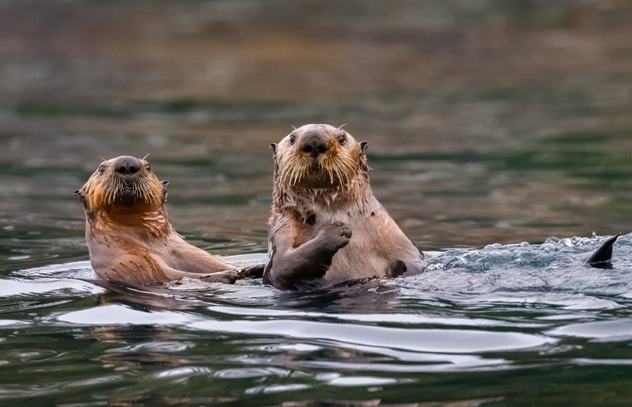 Sea otters take the saying “anything is possible” to an entirely new level. The lovable marine mammals have a dark side—a side that many have probably never seen or heard of. There have been confirmed reports of adult otters mounting, forcibly mating with, and even drowning and killing juvenile seals. Yes, seals. The cringeworthy observation was noted by researchers off the coast of California between 2000 and 2002, where 15 out of 19 incidents resulted in death. Even after the doomed seal pups were killed, the otters took the bodies captive and continued to mate with the corpses.

Oddly enough, sea otters mate in a similar way. Females are mounted and held (sometimes underwater) for a long period of time until mating is completed, even if it means killing the female in the process. Even after death, the male may continue to copulate with the dead body.

The reason for this unusual and savage behavior? Plain old sexual frustration, scientists say. Because female otter populations are declining in the area, male otters are becoming desperate and, unfortunately, taking their aggression out on unsuspecting juvenile pups.

This incredibly violent behavior has been observed in one specific region, but it’s possible that it is occurring elsewhere in the wild.