Modern militaries use relatively standard camouflage patterns and netting to try to hide themselves from prying forces, but not all camouflage and disguise is so boring. Some military disguises that actually worked were outlandish and ridiculous.

In 1973, Israel launched Operation Spring of Youth as part of a larger operation targeting the Palestinian Liberation Organization (PLO) as revenge for the massacre of Israeli athletes at Munich. The operation, which targeted PLO leaders living in Lebanon, had to be very stealthy.

The Sayeret Matkal special operations force tasked with carrying out the assassinations had to sneak past Lebanese security forces and PLO guards without arousing suspicion. To do this, the Israelis turned to a ridiculous disguise: cross-dressing.

After coming ashore on the Lebanese coast on April 9, 1973, some of the Israeli commandos put on dresses and wigs. Pairing up with some of the other commandos, they pretended to be loving couples.

After being driven to their targets by Mossad agents, the commandos blasted down the doors and entered the houses of their targets. Other commandos, some still dressed as women, guarded the outside of the residences. The operation was a complete success, with only two Israeli commandos killed.

9 Explosives Disguised As Flour That Could Be Eaten 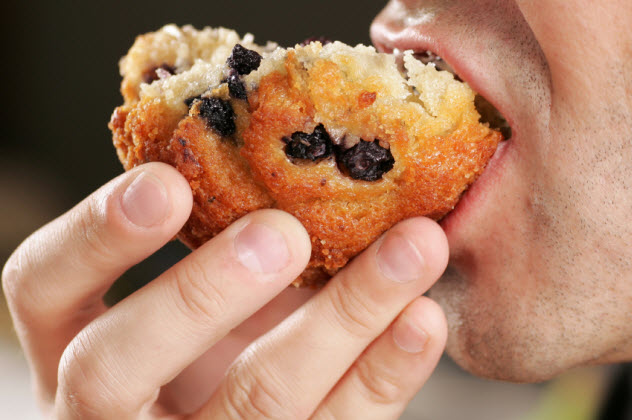 With the OSS aiming to disrupt Japanese operations in Southeast Asia, they turned to chemist George Bogdan Kistiakowsky. He created the perfect explosive that could be disguised as, of all things, flour—and it could be used to bake as well.

The “Aunt Jemima” mixture of three parts explosive and one part flour could be sneaked past Japanese soldiers without suspicion. If they did get suspicious, a realistic looking and tasting loaf of bread could be made and eaten to prove to the Japanese that the flour was “just flour.”

Although the flour could be ingested, the original mixture would have made people very ill. This was amply demonstrated in an incident when a Chinese cook disobeyed orders and ate a muffin, becoming so ill that he nearly died.

Ultimately, a second version of “Aunt Jemima” was developed that was far less toxic than the first variant and could be consumed safely in quantity. In the end, more than 15 tons of the stuff was smuggled into Japanese-controlled areas with the Japanese none the wiser. 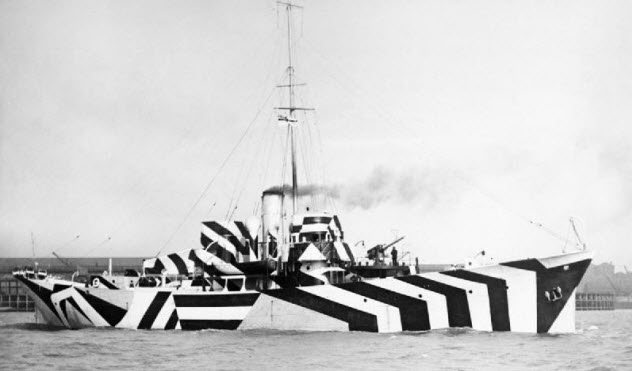 By 1917, with German U-boats having sunk a good 20 percent of the British merchant fleet, Britain needed to stem the losses any way it could. Although previous attempts to disguise merchant ships had failed spectacularly or been impractical in hiding the ships entirely from U-boats, artist Norman Wilkinson’s “dazzle” camouflage was designed to obscure the bearing of the ship instead.

If a U-boat couldn’t tell where a ship was heading relative to itself, the U-boat couldn’t target the ship effectively with a torpedo. Geometric shapes in varying shades of black and white accomplished this by obscuring the bow and other angles on the ship that the U-boat normally used to determine the bearing of the ship.

Wilkinson proposed his idea to the admiralty, who were desperate to stop the U-boats. As a result, they put the idea into practice without much testing. Hundreds of ships were painted with dazzle camouflage, each with a unique pattern to keep the Germans from being able to identify ship classes based on their camouflage patterns.

In the end, there was no official measurement of their effectiveness. But anecdotal evidence and more recent research has indicated that the dazzle camouflage was effective.

7 Man Dressed Up As King’s Bride To Assassinate King 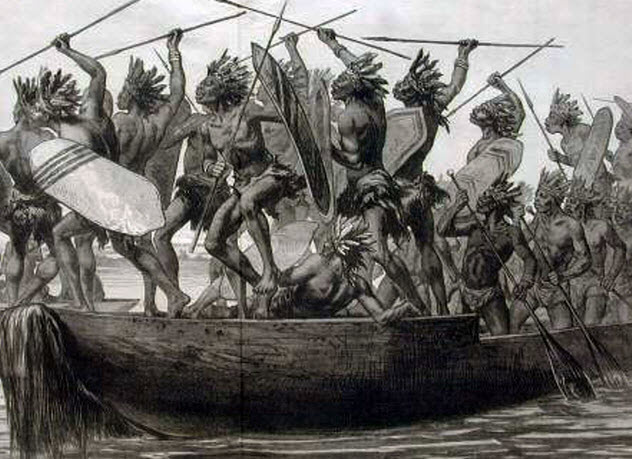 From 1665 to 1678, the Kongo kingdom in Africa was torn by civil war between two major noble houses after the death of the king of Kongo. Soyo, a third noble house, controlled another part of the country and regularly meddled in the affairs of the other two houses. After Pedro III, a later king of Kongo, was forced to flee his capital and then retook it by force, Manuel de Nobrega, a relative of the pretender king that Pedro III had dethroned, plotted his revenge.

De Nobrega decided that it would be impossible to dethrone Pedro III by force. Instead, de Nobrega tricked Pedro III by proposing that he marry a woman from de Nobrega’s clan to end the more than decade-long civil war and bring peace to Kongo.

The West Bank in Jerusalem is often the scene of violent clashes between Palestinians and Israeli security, with each side using deadly force on the other. In November 2015, 20-year-old Azzam Shalaldeh was suspected in the stabbing of an Israeli. Having been shot by the person he allegedly attacked, Azzam took refuge in a Palestinian hospital in Hebron.

While he was being treated, Israeli authorities wanted to arrest him. But Israeli security forces are not very popular in the West Bank, which made any overt attempt to extract him risky.

Elite Israeli soldiers from Duvdevan, an undercover unit that often mingles with Palestinians, entered the hospital by pretending to be a group of bearded relatives with a pregnant woman in a wheelchair who was going into labor. This disguise fooled the hospital staff, who let them in.

After gaining entrance to the hospital, the special forces dropped their disguises and stormed up to the third floor. They shot Azzam’s cousin before bundling Azzam off in the wheelchair. 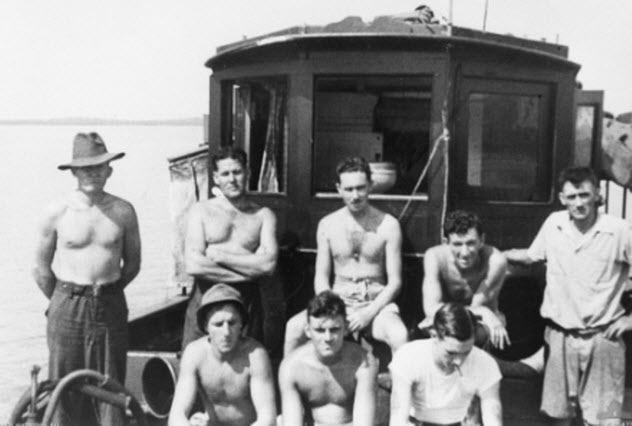 Operation Jaywick was a plan by the British and the Australians to sneak into Singapore and wreak havoc among the Japanese ships anchored there, disrupting Japanese logistics. To do this, a joint British and Australian special forces unit of 11 soldiers disguised themselves as Malay fishermen by dyeing their skin. Then they sailed a captured Japanese fishing vessel through Japanese-controlled seas.

The fishing boat Krait was loaded with canoes and weapons and sent on its way in September 1943. None of the crew could speak Malay, so they had to steer clear of the men on other Malay fishing vessels to avoid capture. In addition, the soldiers’ facial features looked rather different from the locals, even with dye.

After days spent avoiding Japanese patrols, the Krait was able to slip into an isolated anchorage and launch several canoes manned by commandos. Over the course of three days, they were able to get into Singapore, plant explosives on several Japanese ships, and escape. The disguise fooled Japanese forces in the area, and in mid-October 1943, the Krait was safely back in Australia.

After unrestricted submarine warfare was declared by Germany in 1917, the British sought many ways of striking back at U-boats or negating their effects. One of these ways was dazzle camouflage, but another was using Q-ships.

Q-ships—merchant ships that were secretly armed with cannons and machine guns—were fitted with watertight bulkheads that made them resistant to torpedoes and tricked U-boats into coming closer before being destroyed. This strategy worked because U-boats carried a limited number of torpedoes, which their captains tended to hoard. Given the unarmed nature of the enemy they were attacking, U-boats would often surface and use their deck guns to finish off merchant ships.

The Q-ships put on elaborate displays to make the U-boats come closer and surface. That way, the U-boats could be targeted by the Q-ship guns. For example, if a U-boat launched a torpedo that hit the Q-ship, the Q-ship remained afloat while half the crew pretended to be panicked, running around on deck and launching lifeboats.

The choreography inevitably included one last man running onto the deck in panic and a lifeboat having to go back to the ship to get him. They even used stuffed parrots to make the scenes more realistic because sailors usually kept a pet. The remaining crew would be at hidden gun stations until the U-boat surfaced. Then they would turn the tables on the U-boat by opening fire on it.

3 US Military Fooled By Wooden Logs And Haystacks 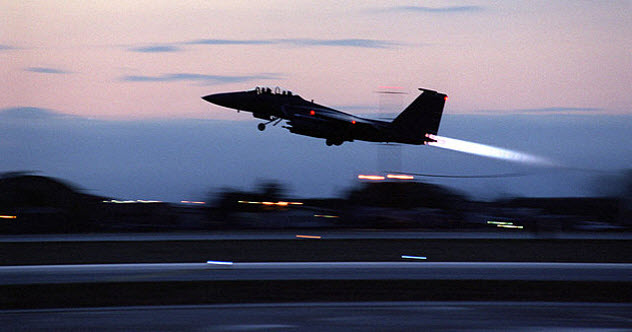 Things got even bloodier when the ethnic Albanians began to fight back, forming the Kosovo Liberation Army. NATO started large-scale air strikes in 1999. During that year, NATO claimed that they destroyed hundreds of tanks and killed thousands of Serbian soldiers. But they were mistaken.

The Serbian army had used primitive decoys to fool NATO aircraft. They made fake bridges out of plastic sheeting, artillery guns out of logs, and fake antiaircraft missile launchers out of milk cartons.

Amazingly, these ridiculous disguises actually worked. The Serbian army was mostly intact and withdrew in good order with nearly all of its equipment after the 1999 cease-fire was declared. 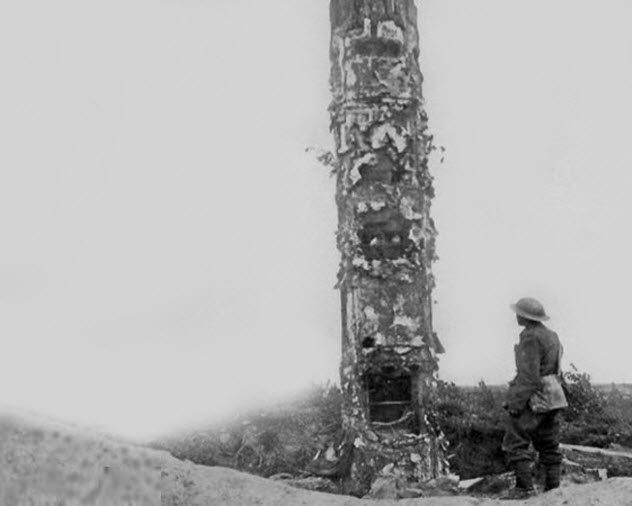 During World War I, artillery and sniper observation posts disguised as trees were used by each side to spy on the other. In 1915, the French were the first to develop this strategy by drawing on the artistic expertise of some of their soldiers.

They painted trees in no-man’s-land, secretly created hollow steel replicas of those trees, and replaced the real trees with the fake ones in the dead of night. This was done to avoid having the enemy become suspicious of a new tree suddenly appearing in no-man’s-land. The British soon copied the French, and the Germans later followed suit.

The steel “trees” had elaborate exteriors that resembled bark and wood that had been subjected to gunfire and artillery shrapnel. Soldiers sat at the top of these trees in small seats in cramped conditions and likely used periscopes to see out of tiny holes in the fake trees. Steel mesh was used to disguise the holes.

1 Dutch Warship Escaped Japanese By Disguising Itself As An Island 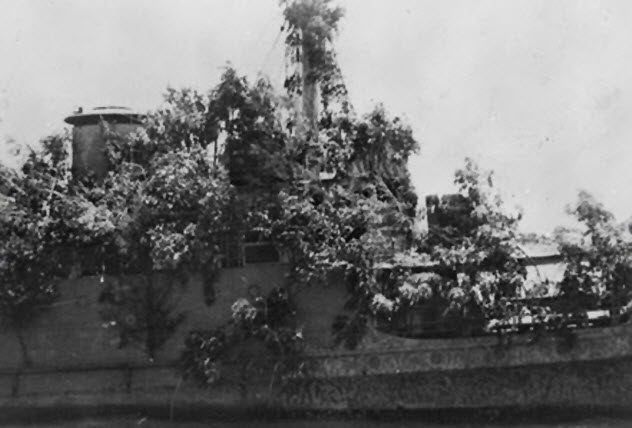 After the Japanese invasion of the Dutch East Indies in 1941 and their decisive defeat of a combined Dutch, British, Australian, and US naval force, the remaining Dutch ships in the East Indies were ordered to flee to Australia. Many Dutch ships were either scuttled or fell prey to Japanese warships or aircraft patrolling their escape routes.

However, the HNLMS Abraham Crijnssen, a tiny minesweeper with little in the way of offensive armament or speed, was able to successfully escape to Australia because the captain came up with a crazy scheme. He disguised the entire ship as a small island.

Although the Abraham Crijnssen was a relatively small ship, it was still a big object—approximately 55 meters (180 ft) long and 7 meters (25 ft) wide. So the crew used foliage from island vegetation and gray paint to make the ship’s hull look like rock faces.

Moving only at night, the ship was able to blend in with the thousands of other tiny islands around Indonesia, and the Japanese didn’t notice the moving island. The Abraham Crijnssen was the last Allied ship that escaped the Dutch East Indies.