Food has evolved a lot. It’s easy to take the complexity of the recipes and technology we enjoy today for granted—but it wasn’t always this way. There was a time when things weren’t so sophisticated and took quite a lot longer.

If you’ve ever wondered what food tasted like back then, you’re in luck. We have the answer. We’ve managed to preserve and recover recipes from the time of Richard II all the way back to the Sumerian empire, and you can still try them today. 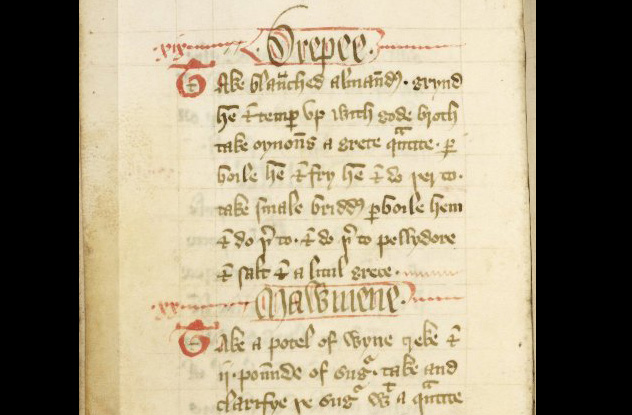 The book was compiled by King Richard II’s personal chefs, and it’s full of dishes that were served to the king of England himself. There are over 190 recipes compiled in there altogether, ranging from the simple to the exotic. Some recipes are as simple as throwing peeled garlic in a pot of water and oil and then sprinkling saffron on top, while others call for porpoise or whale meat.

One place you can try the dishes is at the Cafe at the Rylands, which tested out several of them with their customers back in 2009 and kept a few of the more popular choices on hand. Otherwise, you can just cook them yourself. The full cookbook in its original Middle English can be downloaded here, while several simplified recipes can be found here. 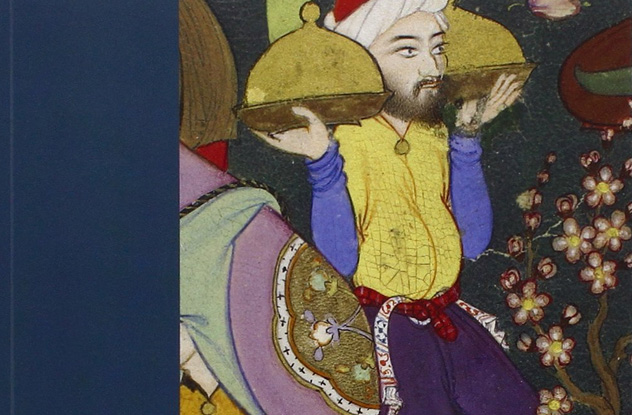 The Annals of Caliphs’ Kitchens, an ancient book by a man named Al-Warraq, is the oldest Arabic cookbook still in existence. The book is filled with over 600 different recipes you can try, some of which are incredibly different from the things you’ve tasted today. Some of these gives really unique insights into how food used to be prepared. One sauce, for example, calls for the cook to leave milk out in the sun for 50 days—a majorly different process from how most people do it today.

The book also has comments on culture, proper behavior, and health—including how to avoid a hangover. The book recommends eating cabbage before going out drinking and then making a stew called “Kkishkiyya” in the morning, which is meant to calm down your headache and your stomach pain.

You can buy the book online. Or, if you’re planning on going out drinking tonight, you can get the recipe for Kkishkiyya online for free right here. 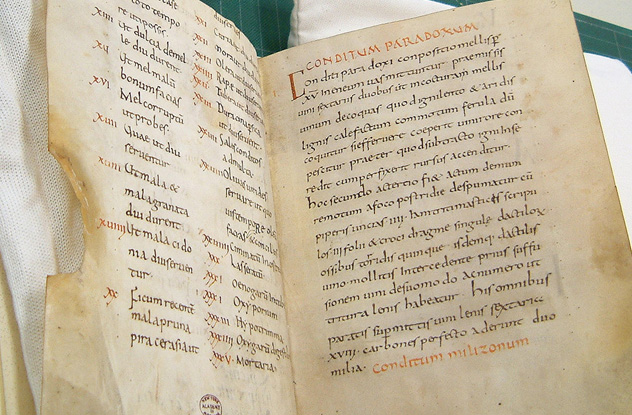 If you want to find out what kind of decadent feasts a Roman emperor would gorge himself on, you’ll want to read Apicius. This cookbook is believed to have been written by Marcus Gavius Apicius, a successful Roman chef. Nobody knows for sure exactly when it was written, but it’s at least 1,500 years old.

The food in it was apparently revolutionary in its time and had some unique discoveries on how to treat meat, most of which sound completely mouthwatering. One, for example, suggests stuffing a pig’s mouth full of dried figs and feeding it honeyed wine before killing it. The book has over 500 recipes, and more than 400 of them are served dripping in sauce.

You can read the original cookbook here—although there is a bit of a challenge in recreating these. The book was intended to be used by experienced Roman cooks, so most of the recipes don’t give quantities of ingredients or cooking times. For the most part, you’d have to go by taste and instinct.

A recipe for pork with apples, however, has been recreated by The Silk Road Gourmet with modern, specific instructions, so you could try one taste of the Roman Empire today. 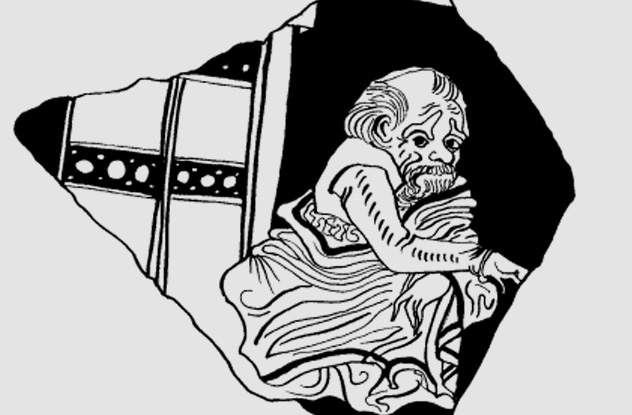 The first three entries on the list are from after the death of Christ, and so they’re full cookbooks that aren’t too different from what we use today. With “The Life of Luxury,” though, we’re going farther back—and things start getting a bit different.

The Life of Luxury is meant to be funny. Rather than just telling you how to cook food, it’s written as a parody of overblown epics, complete in full verse. It’s hilarious—at least, the academics who research it assure us it is, anyway. For most people, though, jokes like “a rather rough ox-tongue . . . is good in summer around Chalcis” might not exactly hold up 2,300 years later.

It’s believed that the book would be put on display during banquets so that people could glance in it and have a chuckle while eating, but the book itself didn’t actually survive. The only reason we know anything about it is because another writer named Athaneaues quoted it in a book called Philosophers at Dinner, written in AD 200.

You can read the parts that survived, though, online here—and you can try recipes that were written before the birth of Christ. 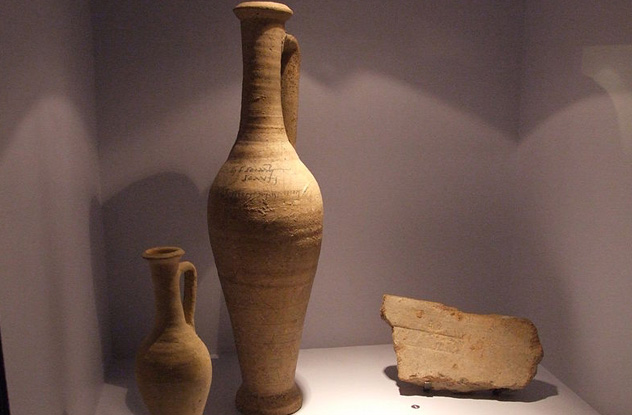 Garum is a salty fish dish—incredibly salty. This is a dish that, in some recipes, calls for as much salt as fish, so if you fry it up with a one-pound fish, you’re supposed to throw an entire pound of salt into the bucket.

This recipe wasn’t written down as neatly as the first few were, but a writer named Laura Kelley who specializes in ancient food has done her best to figure it out. She’s managed to track down records from as far back as 600–800 BC that describe it as a “Carthaginian sauce,” and so we know it was being prepared at least that long ago.

Kelley has also gone to a lot of work trying to recreate it. She mixed together instructions from the oldest documents she could find with a few instincts on what tasted well and then put it together. You can find her instructions here and do it yourself—but you’re going to need a bit of patience. This a recipe from a different era that used different technology, so it takes nine months of fermentation to get it ready. 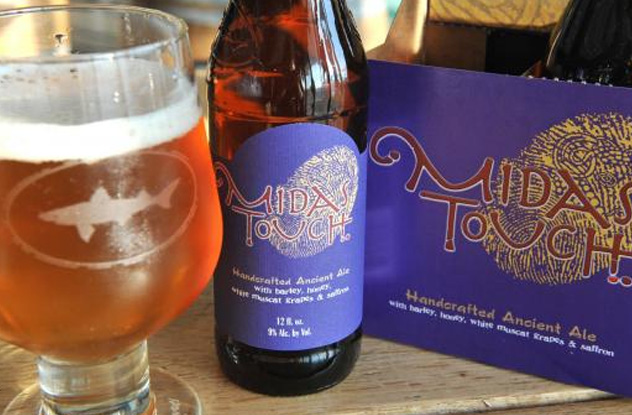 You’ve probably heard the story of Midas, whose every touch turned things to gold, but you might not realize he was a real person. Obviously, King Midas couldn’t turn everything he touched to gold, but he did live, and he did die. And 2,700 years later, we found his tomb.

There wasn’t any gold in Midas’s tomb—he was buried with some of his possessions, but they were ironically all made of bronze. There was, however, something very interesting: the surviving residue of Midas’s beer.

Chemical investigation of the beer in Midas’s cups gave us enough information to actually recreate it, revealing that people in that time drank something altogether different from what we have today. The drink was made of a mixture of wine, beer, and mead, sort of like something you’d mix together if all you had was a few drops left in a few nearly empty bottles and strong determination to get drunk.

This one takes a lot less effort to try, because the Dogfish Brewery has reverse-engineered it and sells it around the world. Reviews call it muddled, flat, and lifeless, but it’s got to be worth it just for the experience of tasting a liquor King Midas himself loved so much that he was buried with it. 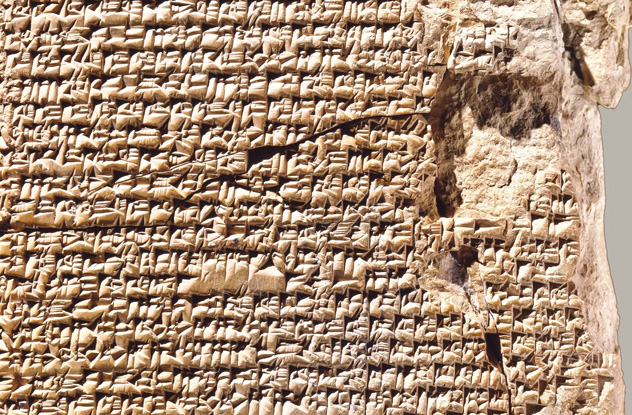 Yale University managed to get into its possession a set of tablets descended all the way from Bablyon, 3,700 years ago, filled with recipes. This is very old food—historians believe that the fact that some of it is cooked in liquid was groundbreaking for its time, as this was prepared in a time so far back that cooking with water just hadn’t occurred to anyone yet.

The first person to thoroughly analyze them, Jean Bottero, didn’t exactly give them a positive review. He called the food “fit for only his worst enemies.” The recipes are, admittedly, a bit simple—one dish, for example, has the exotic-sounding name Akkadian but translates to a much less appealing “meat cooked in water.”

Still, people have gone to great lengths to prove Bottero wrong. Brown University has tried to improve on Bollero’s interpretations of the recipes, claiming they can be made delicious. A full, modern-style recipe for one of the dishes, “Wildfowl Pie” can be found online here. 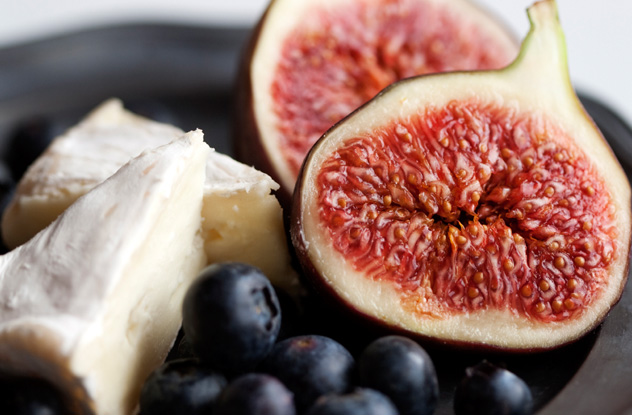 According to Jean Bottero, there are only two full recipes older than the Babylonian Tablet, one of which is for mersu. Bottero describes the mersu tablet as “recipe” for a “cake,” although all the tablet actually says it that dates and pistachio were delivered to make a dish called mersu

The rest of this comes from theories based on the name and other similar dishes, so we aren’t necessarily right about how mersu was made. Still, there are recipes you can try that give out best guess.

The oldest recipe actually found was from a city called Nippur and was apparently used as a sacrificial offering to the gods. It includes figs, raisins, minced apples, garlic, oil, cheese, wine, and syrup, which makes it sound like the most decadent and spectacular treat in the world.

Some suggestions on how to put together your own mersu can be found here. For one this old, you won’t exactly find a full recipe—but you’ll be able to put together something close. 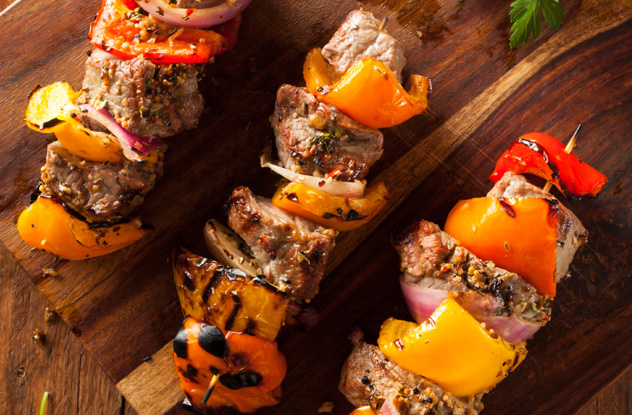 I will admit that eating a kebab may not be as unique of an experience as some of the others on this list.

A kebab, for those unaware, is meat, perhaps skewered through with a stick, and some form of this meal is popular all around the world. Still, it’s worth noting just how remarkably ancient kebabs are. There is definitive evidence that people in Greece were eating them as early as the 17th century BC, which means that every time you bite into a Greek kebab you’re sharing an experience someone had almost 4,000 years ago.

So, anywhere you are in the world, any time you bite into a kebab, you’re biting into a history that goes back almost 4,000 years. 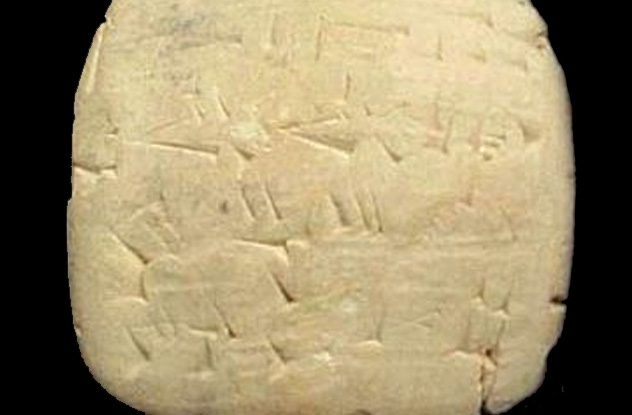 This incredibly ancient recipe for Sumerian beer isn’t exactly a recipe at all. Instead, it comes from a poem dedicated to Ninkasi, the goddess of beer. The poem just happens to be weirdly detailed. The poem praises Ninaski by saying things like, “You are the one who bakes the bappir in the big oven / puts in order the piles of hulled grains” often enough and with enough detail that people have been able to actually recreate the liquor fairly accurately.

The beer it makes has to be drunk with straws and apparently tastes fairly similar to hard apple cider. Unlike Midas Touch, though, it can’t be sold en mass. The beer has to be drunk right away or else it goes bad—so the only way you can try this one is if you make it yourself.

Which you can do. Read the poem for yourself right here. Just make sure you have a bappir and some large reed mats ready.

Mark Oliver contributes to several websites, included Cracked, The Onion’s StarWipe, and, of course, Listverse. You can see everything he writes on his website.)